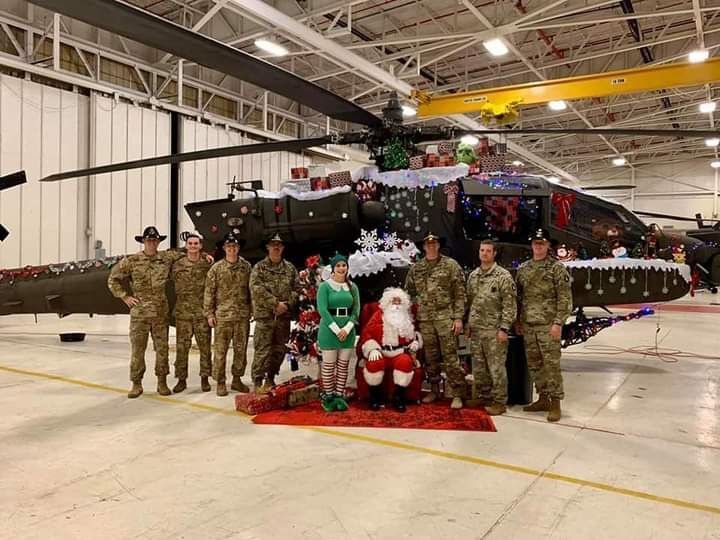 Dan Paul stands in as Santa for troops and their families at Fort Campbell, Kentucky. 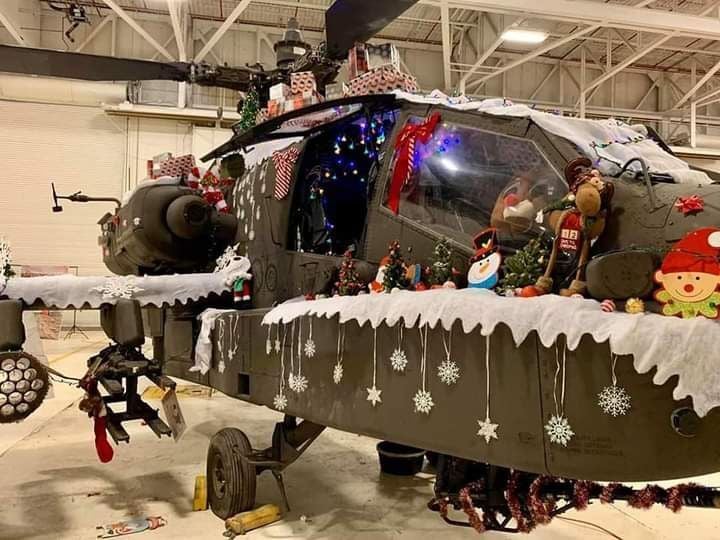 The Apache helicopter was decorated and was the backdrop for Santa’s throne at Fort Campbell, Kentucky.

Dan Paul stands in as Santa for troops and their families at Fort Campbell, Kentucky.

The Apache helicopter was decorated and was the backdrop for Santa’s throne at Fort Campbell, Kentucky.

A profound experience is what I encountered during Christmas of 2019, as I was invited to return as Santa Claus to Fort Campbell, Kentucky, and the Tennessee State Veterans’ Home. At these two events, little did I know what would transpire before my eyes and in my heart.

Upon arrival at Fort Campbell, I was informed that as Santa Claus, I would be meeting with some of the soldiers and families at the Apache helicopter hangar. Unbeknownst to me, I was in for a shock as First Sergeant Burley informed me that Santa’s throne was being readied.

We walked into the Apache helicopter bay. I stood in awe and amazement, speechless at the sight before me. There stood Santa’s throne, with a backdrop of an Apache helicopter, completely adorned in Christmas streamers and other trimmings, all being readied by the soldiers for Santa’s appearance.

I was taken to a nearby office to change into my Santa suit. In less than an hour, I was escorted into the bay, and before me, was the hangar, filling with soldiers and their families waiting in line to spend time with Santa Claus.

As the children arrived, one could see their eyes light up, complemented with huge smiles, as they saw the decorated Apache helicopter, along with Santa and his throne. The children sat either on my lap or stood, and brought not only their requests, but their family’s as well. During this time, an underlying theme presented itself, as one could see and hear that this was extra special, possibly because either their parent had returned or would soon be deployed overseas. While this was transpiring, the soldiers were thanking me profusely. I was so humbled that I told them that it was my way of thanking them and their families for their sacrifices.

Afterwards, I traveled to the Tennessee State Veterans’ Home, Upon entering that facility, I met with the director, whereupon I was taken to a room to change into my Santa suit. Afterwards, we began to make our way throughout the facility’s rooms and distribute candy canes, and wish the individual veterans a very Merry Christmas.

That is when I experienced an emotional roller coaster, which I will never forget. As I entered one resident’s room, I found him lying in bed, looking up at me. The once blue eyes now seemed faded, but still had a sparkle to them. As he recognized the suit, his worn and wrinkled face broke into a huge smile. I moved right next to his bed and gave him the candy cane and touched his hand and told him, “Thank you for all of your sacrifices and for keeping us safe.” His gnarled and scarred hands feebly reached out to me and pulled me close to him. With tears in his eyes, he looked me straight in the eye, and in a barely audible whisper, weakly pointing an index finger at me, said, “I did it for you.” At that moment, my beard began to collect a lot of moisture, as I realized he wasn’t talking to me as Santa, but our way of life and freedoms that we cherish today.

This scene repeated itself throughout the course of the day. The words and sentences varied, but in essence they had an identical theme. More tears and sobs were shed as I met family members who were visiting. Stories of their service and sacrifice were shared. All that had transpired left me mentally exhausted, but so very, very thankful.

This year, before we begin the Christmas festivities, let us celebrate the true meaning of Christmas (the birth of Jesus Christ) in our hearts, and give thanks to God. In our prayers, keep close all of our soldiers and their families in thanksgiving for their sacrifices. The Paul Family wishes that all of you have a safe and very Merry Christmas.

Dan Paul is a retired school administrator. His columns will explore family relationships. They will be published at the beginning of each month. Those who have any questions, comments, reflections, or personal stories related to the subject of this article, may contact Paul at meaningfuldifferences.net.