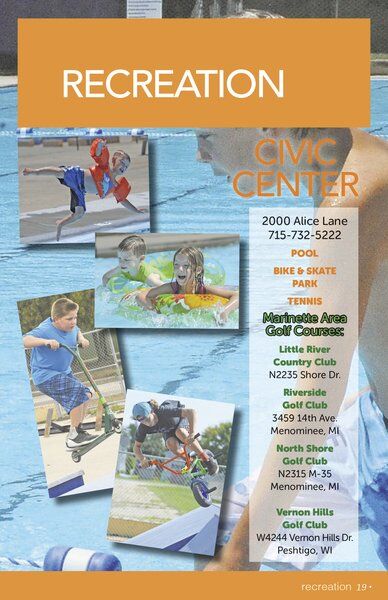 The EagleHerald received seven awards in both advertising and news in the 2018 WNA Foundation Better Newspaper Contest.

Advertising graphic designer Laurie Caebe received a second-place award for Best Use of Local Photography for an ad she designed in the Marinette City Guide for the Marinette Civic Center, using photographs taken by EagleHerald photographer Rick Gebhard.

Penny Mullins, EagleHerald news editor/digital director, received an honorable mention for columns she wrote in 2018, including one on her son’s retirement from military service with the U.S. Army. Judges wrote: “Great writing with a personal touch. Loved the Mother’s Day column.”

Mullins worked with Melissa Kowalczyk, EagleHerald page designer, to do a special front page called “Moving a hospital/Planning for everything” to share the stories about steps Bay Area Medical Center took prior to the move from the old hospital building to a new location in 2018. The stories and that submission received an honorable mention in the General News Story category. Judges said, “Very interesting article and well-written.”

Mullins, Caebe and the advertising staff teamed up to produce the special advertising/editorial publication “EagleHerald BAMC Commemorative Edition,” which coincided with the opening of the new BAMC hospital, and received an honorable mention from judges in the Best Special Section category. Judges said the publication had a “nice clean look.”

The EagleHerald falls into Division B (circulation 7,000 to 19,999) for editorial work and Division A/B for advertising.

The Wisconsin Newspaper Association Foundation honored the work of newspapers across the state during the 165th WNA Convention & Trade Show on March 7-8 at the Madison Concourse Hotel in downtown Madison. Recipients of 2018 Newspaper of the Year Awards were Publisher Sidney “Skip” Bliss and The Gazette, Janesville, (Daily Division) and Publisher Gregg Walker and the Lakeland Times, Minocqua (Weekly Division). Bliss Communications is the parent company of the Janesville Gazette and the EagleHerald.

The 2018 WNA Foundation Better Newspaper Contest included 2,799 entries from 121 newspapers. Eligible entries were published between Sept. 1, 2017, and Aug. 31, 2018, and were judged by members of the Washington Newspaper Publishers Association.