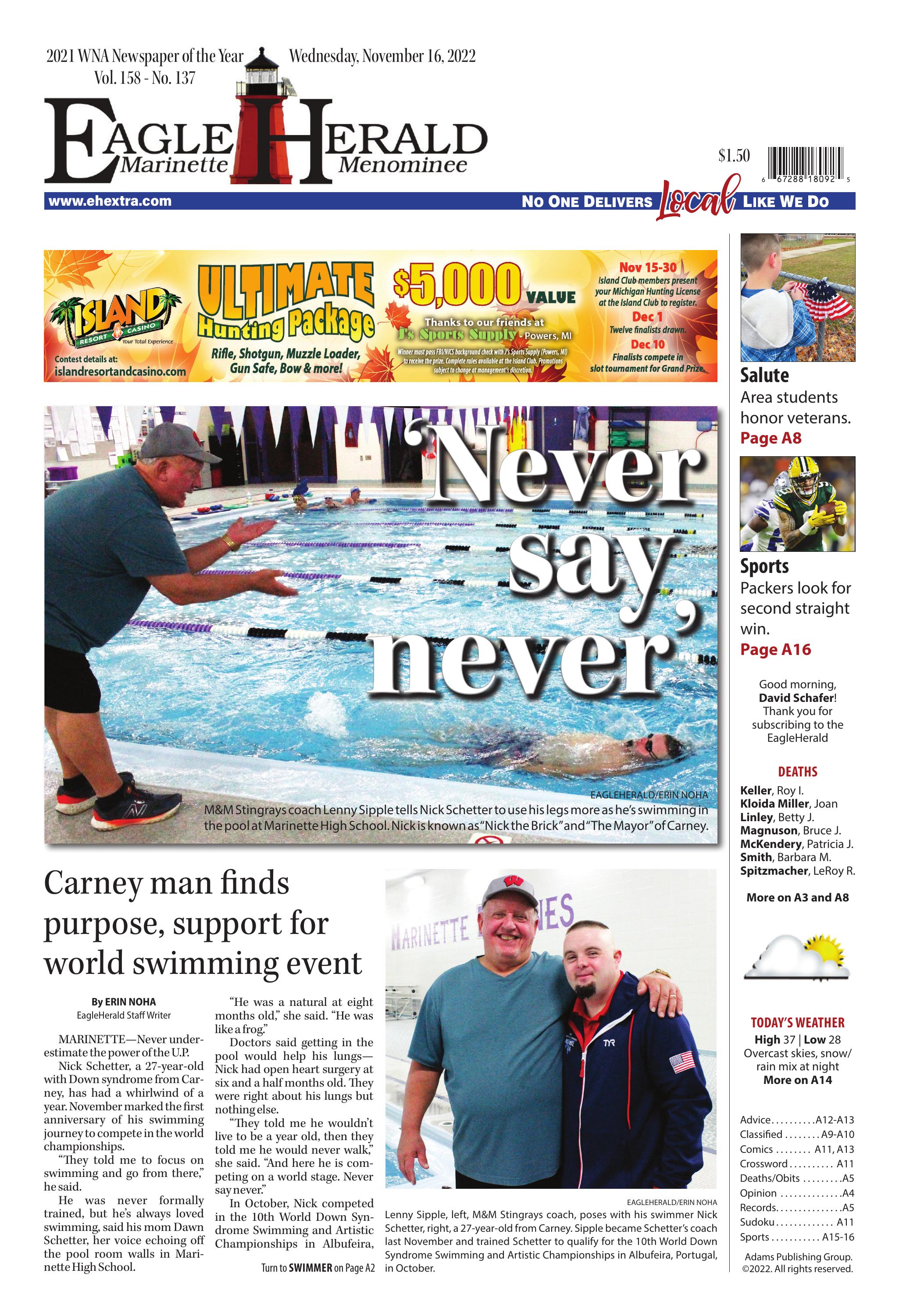 Nick Schetter, a 27-year-old from Carney, trains in the pool at Marinette High School. In October, Nick competed in the 10th World Down Syndrome Swimming and Artistic Championships in Albufeira, Portugal.

M&M Stingrays coach Lenny Sipple tells Nick Schetter to use his legs more as he’s swimming in the pool at Marinette High School. Nick is known as “Nick the Brick” and “The Mayor” of Carney.

MARINETTE—Never underestimate the power of the U.P.

Nick Schetter, a 27-year-old with Down syndrome from Carney, has had a whirlwind of a year. November marked the first anniversary of his swimming journey to compete in the world championships.

“They told me to focus on swimming and go from there,” he said.

“He was a natural at eight months old,” she said. “He was like a frog.”

Doctors said getting in the pool would help his lungs—Nick had open heart surgery at six and a half months old. They were right about his lungs but nothing else.

In October, Nick competed in the 10th World Down Syndrome Swimming and Artistic Championships in Albufeira, Portugal, hosted by the Down Syndrome International Swimming Organization (DSISO). Nick and his mom spent 15 days training and competing, with Nick swimming in four events and placing the best in his favorite event, breaststroke.

USA Down Syndrome Swimming, Inc. (USADSS) placed fourth overall at the event, which brought together 163 swimmers from 23 different countries. From the U.S., there were 23 competitive swimmers and seven artistic swimmers in the synchronized events.

To qualify for worlds in his first year, an anomaly, but as a Yooper, too? There’s only one swim team in an hour’s radius of Marinette and Menominee. The drive alone from Carney is 40 minutes to get to practice, she said.

While some people in the U.S., let alone the world, can’t place the U.P. on a map, Dawn said that the area has enough heart to make up for it. The people, like Nick, have no limits or lengths to what they can do, she said.

“The U.P. is a pretty cool place,” she said. “I couldn’t even talk after our spaghetti dinner. I was blown away by the amount of people that came.”

The spaghetti dinner fundraiser and GoFundMe brought in enough money to cover their flight and hotel for Portugal. Nothing was like seeing the support in person, though. She said some families traveled over 100 miles with their special needs kids to show up for Nick, their hero.

Dawn is sometimes a fish out of water, being a native of Southern California. However, her roots were always here. Her parents are Yoopers, and she also went to Northern Michigan University. She moved back to the area before marrying Nick’s dad. Nick has four older sisters and one younger brother and grew up with his mom and dad in Carney, where he lives now. For years, she struggled with the idea of moving Nick to a larger city, she said.

“While it’s true that in the U.P., we have to drive further for our healthcare services, you sure don’t have to drive far to see a friendly face,” she said. “And that was always important to me. That Nick always felt loved and accepted.”

For Nick’s sendoff to Portugal, they were escorted from Carney to the state line with fire trucks and squad cars from Menominee and Marinette departments—35 miles of lights and sirens. When they reached Menominee and saw the people lined up with posters, what she had been holding back for so many months came spilling out over the steering wheel.

“I bawled my eyes out when we got to Menominee because I’m like, ‘We’re not going to practice. We’re going to Portugal for a world competition,’” she said, showing a video of Nick waving out the window. “He’s done all the work.”

And work he has. He wasn’t famously named “Nick the Brick” in Marquette after four years of powerlifting in the Special Olympics for nothing. Dawn said when he joined the swim team last year, he was too muscular to put his arms over his head.

“He couldn’t do a backstroke, and Lenny (coach Sipple) was like, ‘Dude, back off the weights,’” she said.

Nick said he’s not mad about losing some of his muscle. He lifts his arm and flexes.

“This is skinny, but this is bigger,” he said, pointing to his bicep.

M&M Stingrays coach Lenny Sipple started training Nick last November. Sipple is known to many in the community, but Dawn, being from Carney, hadn’t heard of him. Sipple has taught kids with autism, blindness and other physical disabilities.

“Lenny is like meeting Santa Claus. He has a heart of gold, and he doesn’t cut him any slack in practice. He’ll tell him, ‘My grandma swims faster than you. Get going,’” she said. “He treats him with respect and like he’s one of the guys. He doesn’t treat him any different; it’s really hard to find that.”

She said she learned that Lenny was devoted to a program of inclusion for kids on his team, and not just in a nice way, either. He treats all his swimmers with the same respect, sometimes tough love, which is Sipple in his best form.

Sipple coaches ages swimmers from ages 5 to 19 from the surrounding area of Marinette, Menominee, Peshtigo, Iron Mountain, Porterfield and Escanaba. He said he’d give two free weeks to anyone who wants to try out. He mentioned that swimming is an excellent avenue for people with disabilities, citing the number of competitors at the world event.

“But how many other kids are out there that haven’t even tried?” he said.

Sipple only had three months to train Nick before his team tryouts in February in Florida. Compared to the Special Olympics, where everyone gets to compete, Nick had to meet the qualifying times set by the DSISO to compete on the U.S. team for Portugal. He qualified for all four events. This was big time.

Dawn said he met many incredible people along the way, including Nick Baumgartner, an Olympic gold medalist at Beijing 2022 and fellow Yooper born and bred in Iron River. He had known him years earlier in Marquette but got special treatment this year.

“He’s my buddy,” he said. “He’s my inspiration. He said to dream big and go for the gold.”

Baumgartner sent Dawn “rooting for you” texts while Nick was at worlds, and Nick got his best time after the encouragement. Nick, known as “the mayor” in Carney, is used to his fan base. Nick competed in basketball and track in high school, with unfailing support from students, teachers and basketball coach Paul Polfus.

“I told Paul, ‘Well, unfortunately, you never told him he couldn’t do something, so now he thinks there’s no limit,” she said.

Swimming has brought a lot into his life. He has friends in Michigan, Wisconsin, California and Missouri, and the list goes on and on. These friendships are something he didn’t have just a year ago. Now there’s this whole world out there, Dawn said. Nick mentions his friend Luke, who lives downstate.

“He told me to enjoy swimming and have fun,” Nick said.

He had just returned from a swim meet in Marquette that earned him three silver medals. He also had a personal record at the meet. He recalls the cheering he received at worlds.

“It makes me happy, all the parents, all the swim teams cheering my name,” Nick said.

For coach Sipple, his form of inclusion is tough love.

“I don’t treat him differently. I yell at him like I yell at the rest,” he said.

And the U.P. is undoubtedly tough. Communities are used to time changes, long drives and being underestimated. What it lacks in resources, it makes up for in the community. Surely, Nick has enough grit for everyone.

“The only limits he’ll have are the ones you put on him,” Dawn said. 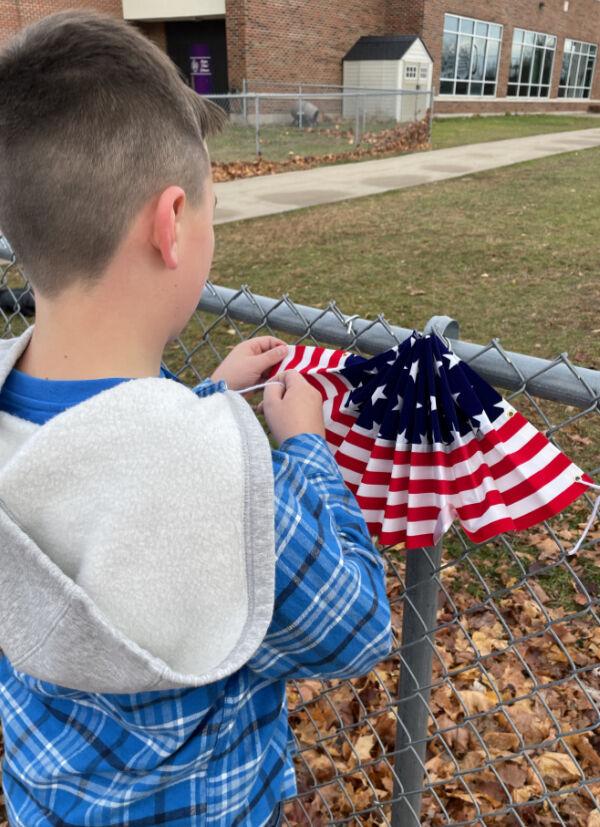