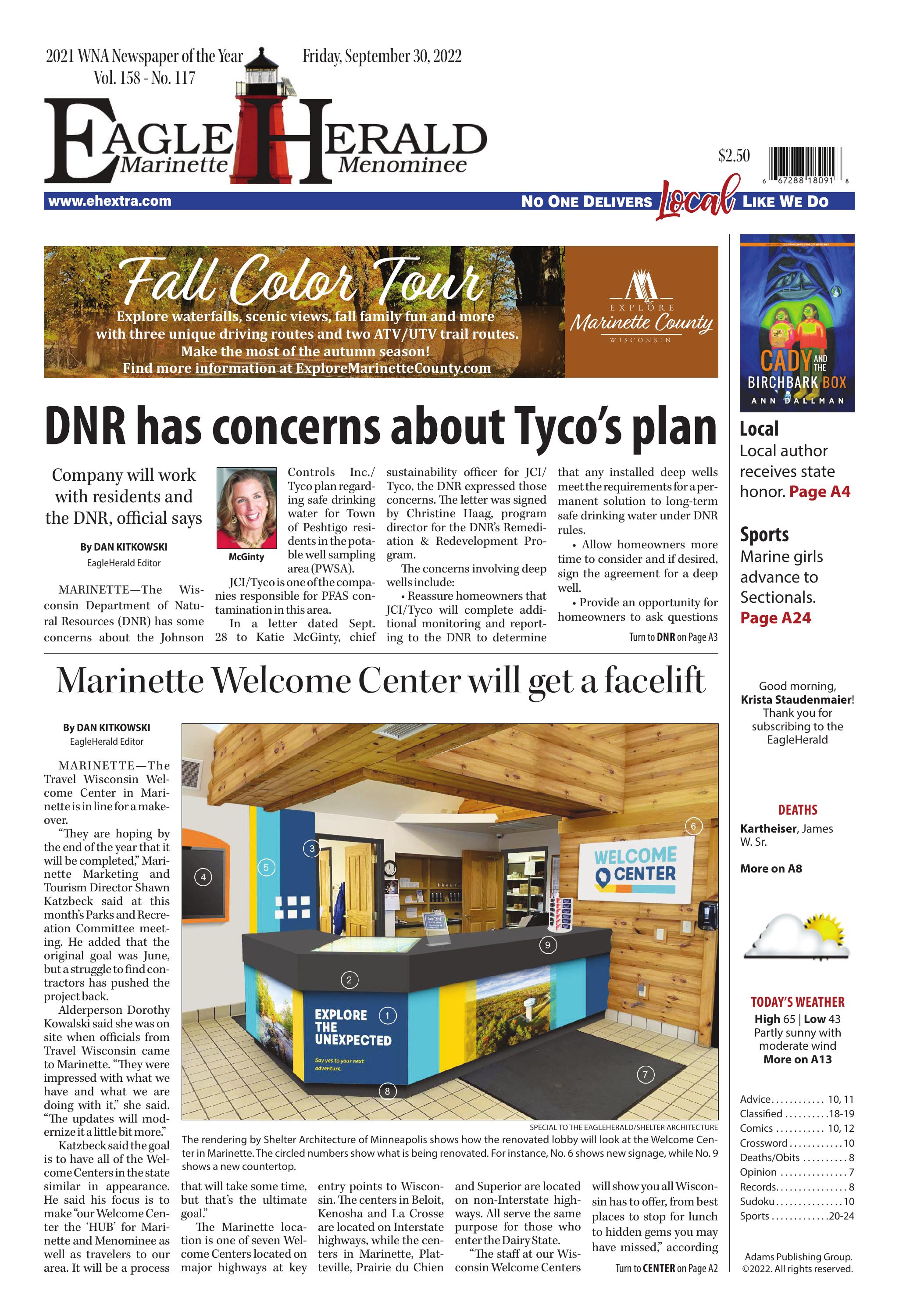 MARINETTE—The Wisconsin Department of Natural Resources (DNR) has some concerns about the Johnson Controls Inc./Tyco plan regarding safe drinking water for Town of Peshtigo residents in the potable well sampling area (PWSA).

JCI/Tyco is one of the companies responsible for PFAS contamination in this area.

In a letter dated Sept. 28 to Katie McGinty, chief sustainability officer for JCI/Tyco, the DNR expressed those concerns. The letter was signed by Christine Haag, program director for the DNR’s Remediation & Redevelopment Program.

The concerns involving deep wells include:

• Reassure homeowners that JCI/Tyco will complete additional monitoring and reporting to the DNR to determine that any installed deep wells meet the requirements for a permanent solution to long-term safe drinking water under DNR rules.

• Allow homeowners more time to consider and if desired, sign the agreement for a deep well.

• Provide an opportunity for homeowners to ask questions and learn more about the risks and benefits of a deep well. In particular, homeowners should be made aware of the likely presence of radium in groundwater from the deeper aquifer, the risks that contaminant poses and any homeowner responsibilities in maintaining a deep well.

The concerns for homeowners who do not choose a deep well at this time include:

• Continue to provide them with a supply of alternative safe drinking water (i.e., continuation of bottled water service and/or maintenance of a POET system).

• Offer future opportunities to have JCI/Tyco install a deep well on their property.

“The DNR is committed to helping residents in the area receive a long-term source of safe drinking water in a reasonable time frame and will review any information that JCI/Tyco submits to determine if deep wells are part of a permanent solution.” the DNR said in a press release.

JCI/Tyco has taken full responsibility for issues caused by its former test site, considered to be one source of PFAS, also known as forever chemicals because of their staying power.

Per- and polyfluoroalkyl substances, or PFAS, are used to make firefighting foam, nonstick cookware, water-repellant material and other products and components, and they pose a health risk. They’ve been linked to cancer, birth defects, thyroid problems, liver damage, developmental delays and other health issues, according to the U.S. Environmental Protection Agency.

Earlier this summer, Wisconsin Attorney General Josh Kaul filed a lawsuit against Tyco and several other companies over the PFAS issue. Tyco spokeswoman Karen Tognarelli called the action an election-year ploy and said Tyco has spent millions tackling the problem. In August, the Town of Peshtigo announced intentions to file a lawsuit against those responsible for harming its water. Details of that lawsuit have not yet been disclosed.

Last week, JCI/Tyco had a ceremony at its new Groundwater Treatment Building, located behind Marinette High School at the site of the former Ansul testing area in the 2100 block of Pierce Avenue. The event showcased JCI/Tyco’s Groundwater Extraction & Treatment System (GETS). JCI/Tyco has spent $25 million on GETS and another $11 million on an Advanced Research and Testing Facility at the Fire Technology Center (FTC).

Regarding the DNR concerns, JCI/Tyco responded with a letter from McGinty to those in the PWSA.

“We’ve gotten some feedback from some of you and from the WDNR that we wanted to act on right away,” she wrote. “Specifically, there are some questions and confusion about the January 15th date we included in the Deep Well mailing we sent you. To avoid any concern, we are dropping that date.”

McGinty stated there will be no pause in action by JCI/Tyco and it will continue to work with the DNR.

Regarding the deep well time frame, she wrote, “We will keep working until Mother Nature makes us stop this winter. And we will then create a first-come, first-serve list to pick up with in the spring.”

In the letter, McGinty explained that JCI/Tyco thought the Jan. 15 deadline was important for two reasons. It would show the company has a committed game plan for action to deliver water solutions and it would give those who are seeking annexation with the city of Marinette to choose a deep well if the annexation was not successful.

“Many of you have told us that our personal outreach—visits in your kitchens and living rooms, calls and follow-up questions and answers—were the first time anyone has actually asked you personally for your input. Tyco was privileged to have those conversations, and neighbors have been remarkably clear in sharing their water preferences and giving us direction,” McGinty told residents in the letter.

Haag, in her letter to McGinty, said the DNR has received two reports submitted by JCI/Tyco this week regarding its design and monitoring plans for the deep wells.

“The DNR will be reviewing the information in these two reports and any future JCI/Tyco submittals to document progress in its site investigation and evaluation of deep wells as this potential long-term solution to safe drinking water,” she wrote.

Haag added that, “The DNR is committed to helping ensure residents in the area receive a long-term source of safe drinking water in a reasonable time frame.”

McGinty, in her letter, said if anyone has questions or concerns, they can contact JCI/Tyco at 715-582-7100 or via the Contact Us form on tycomarinette.com.

The rendering by Shelter Architecture of Minneapolis shows how the renovated lobby will look at the Welcome Center in Marinette. The circled numbers show what is being renovated. For instance, No. 6 shows new signage, while No. 9 shows a new countertop.

MARINETTE—The Travel Wisconsin Welcome Center in Marinette is in line for a makeover.

“They are hoping by the end of the year that it will be completed,” Marinette Marketing and Tourism Director Shawn Katzbeck said at this month’s Parks and Recreation Committee meeting. He added that the original goal was June, but a struggle to find contractors has pushed the project back.

Alderperson Dorothy Kowalski said she was on site when officials from Travel Wisconsin came to Marinette. “They were impressed with what we have and what we are doing with it,” she said. “The updates will modernize it a little bit more.”

Katzbeck said the goal is to have all of the Welcome Centers in the state similar in appearance. He said his focus is to make “our Welcome Center the ‘HUB’ for Marinette and Menominee as well as travelers to our area. It will be a process that will take some time, but that’s the ultimate goal.”

“The staff at our Wisconsin Welcome Centers will show you all Wisconsin has to offer, from best places to stop for lunch to hidden gems you may have missed,” according to the Travel Wisconsin website. “Each Wisconsin Welcome Center offers free local, regional and statewide brochures and maps. One-on-one advice from trained staff will help you find accommodations, events and attractions that will make your visit memorable.”

The key changes at the Marinette Welcome Center will be renovations to the vestibule, main office and lobby. In addition, existing exterior signage will be replaced and all door frames throughout the center will be repainted.

Some of the renovations include: 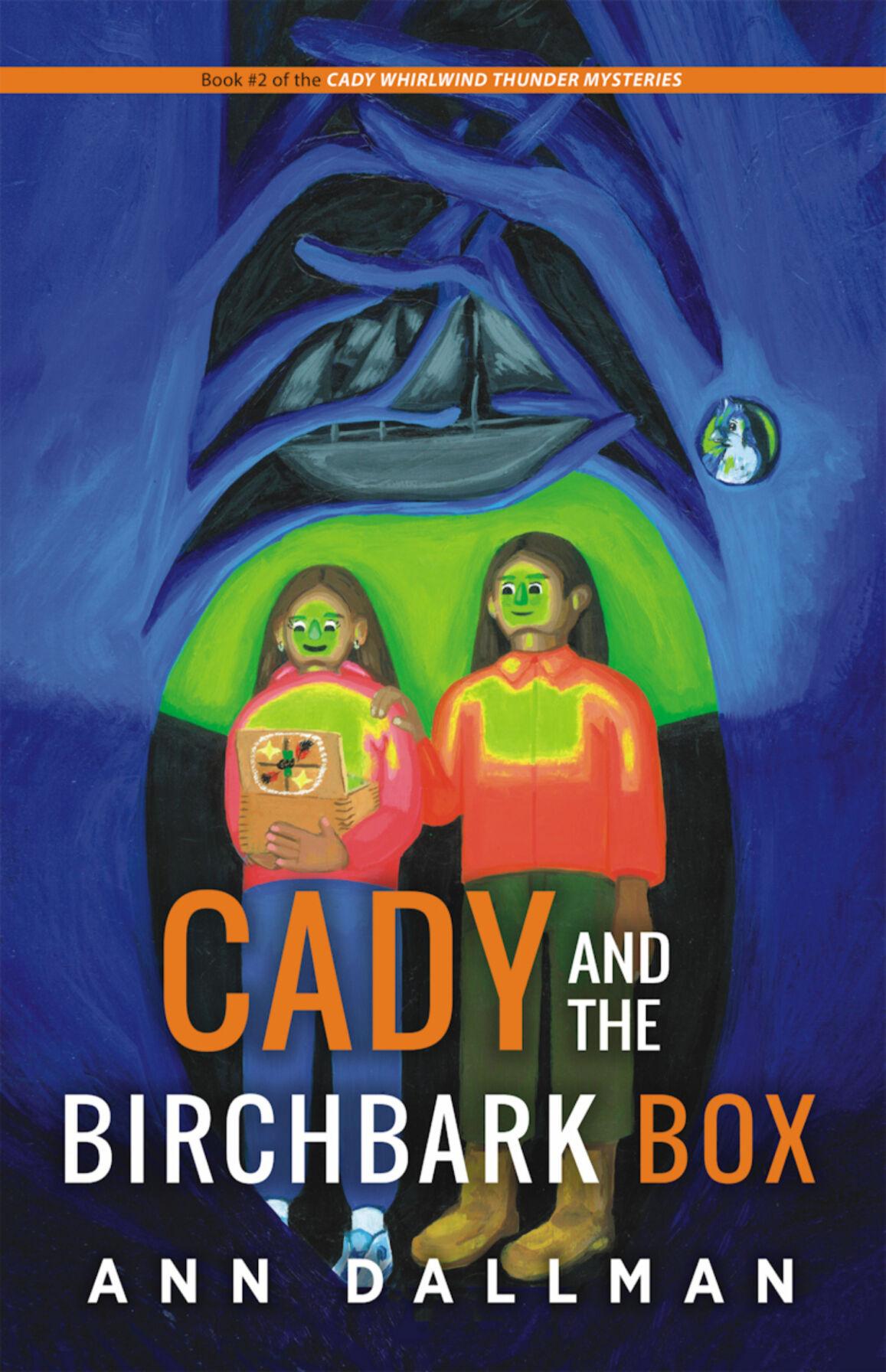 This is the cover of a book by Menominee author Ann Dallmann. The book, “Cady and the Birchbark Box, received recognition from the The Historical Society of Michigan.