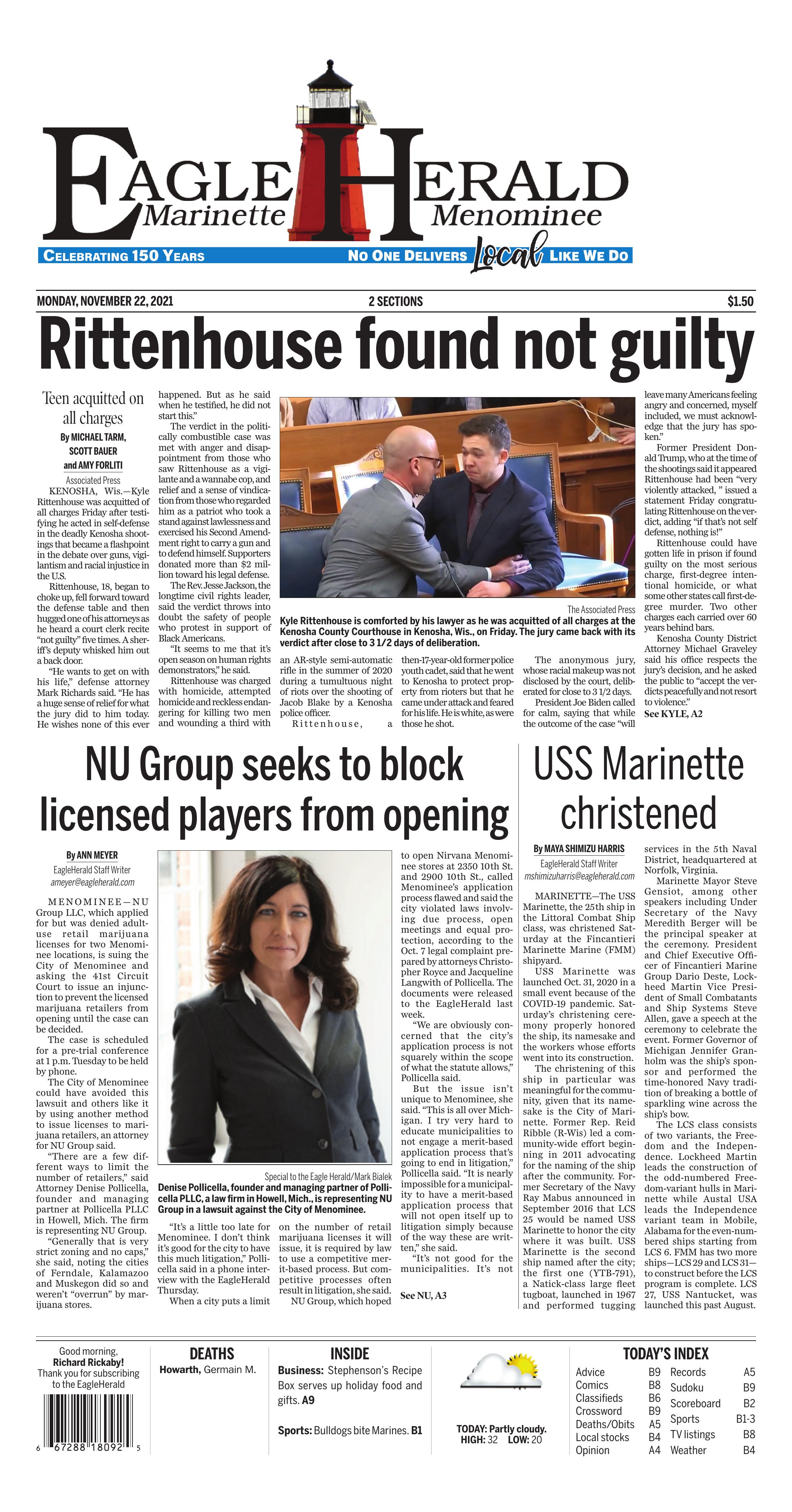 Denise Pollicella, founder and managing partner of Pollicella PLLC, a law firm in Howell, Mich., is representing NU Group in a lawsuit against the City of Menominee.

MENOMINEE—NU Group LLC, which applied for but was denied adult-use retail marijuana licenses for two Menominee locations, is suing the City of Menominee and asking the 41st Circuit Court to issue an injunction to prevent the licensed marijuana retailers from opening until the case can be decided.

The case is scheduled for a pre-trial conference at 1 p.m. Tuesday to be held by phone.

The City of Menominee could have avoided this lawsuit and others like it by using another method to issue licenses to marijuana retailers, an attorney for NU Group said.

“There are a few different ways to limit the number of retailers,” said Attorney Denise Pollicella, founder and managing partner at Pollicella PLLC in Howell, Mich. The firm is representing NU Group.

“Generally that is very strict zoning and no caps,” she said, noting the cities of Ferndale, Kalamazoo and Muskegon did so and weren’t “overrun” by marijuana stores.

“It’s a little too late for Menominee. I don’t think it’s good for the city to have this much litigation,” Pollicella said in a phone interview with the EagleHerald Thursday.

When a city puts a limit on the number of retail marijuana licenses it will issue, it is required by law to use a competitive merit-based process. But competitive processes often result in litigation, she said.

NU Group, which hoped to open Nirvana Menominee stores at 2350 10th St. and 2900 10th St., called Menominee’s application process flawed and said the city violated laws involving due process, open meetings and equal protection, according to the Oct. 7 legal complaint prepared by attorneys Christopher Royce and Jacqueline Langwith of Pollicella. The documents were released to the EagleHerald last week.

“We are obviously concerned that the city’s application process is not squarely within the scope of what the statute allows,” Pollicella said.

But the issue isn’t unique to Menominee, she said. “This is all over Michigan. I try very hard to educate municipalities to not engage a merit-based application process that’s going to end in litigation,” Pollicella said. “It is nearly impossible for a municipality to have a merit-based application process that will not open itself up to litigation simply because of the way these are written,” she said.

Pollicella said it’s unfortunate the municipalities end up in court. “I really don’t like to litigate against a municipality,” she said. But unless NU Group sues, it won’t be granted relief. “We do feel we have the responsibility to represent our clients when we do feel they have a claim,” she said.

Several marijuana companies have made similar arguments in lawsuits against the city, and they’ve raised some of the same issues other Michigan municipalities have been sued over. They include violations of the Open Meetings Act, Michigan’s Regulation and Taxation of Marijuana Act (MRTMA) and the due process and equal protection tenets of the U.S. Constitution’s Bill of Rights.

The City of Menominee “attempted to pre-emptively discourage valid challenges to its selection process and strip applicants of due process rights in the selection process by stating that scoring is final and not subject to appeal,” NU Group said in the filing.

Selection committee members deducted points from NU Group’s application because it did not use the term “FTEs,” which the company referred to as “magic language,” the filing said.

NU Group’s application also lost points in the category of previous experience in other regulated industries, despite the fact NU Group’s owner Nighat Ullah has owned and managed businesses that involved liquor and gasoline, two highly regulated industries. He also has 12 years of experience operating marijuana businesses in Michigan, Oregon, Maryland and Maine, the filing said.

By not discussing these points openly, the selection committee failed to allow NU Group to participate in the discussion and correct the committee’s oversights, violating the Open Meetings Act (OMA) and the company’s rights to due process and equal protection, the filing said.

The selection committee held “secret closed-door meetings and unnoticed meetings in violation of the OMA with no lawful explanation why those meetings were closed,” NU Group said.

In deciding whether to grant an injunction, the court must consider whether the harm is greater to the companies that already have been awarded licenses if they’re asked to put their plans on hold or to the companies that say they were treated unfairly in the selection process because the city violated laws, attorneys for NU Group explained in the court documents. The harm to the public if an injunction is issued also will be considered.

Injunctions aren’t unheard of. NU Group refers in the filling to a case in Traverse City, where Circuit Court Judge Thomas Power decided in favor of the marijuana companies suing the city and issued a preliminary injunction.

“Michigan affords citizens the right to seek redress of adverse decision-making of government agencies, including a municipality’s decision on a business license or a special use permit,” according to NU Group’s filing.

But the process could take months. “I’m certainly not going to opine on what the judge is going to do. These particular lawsuits don’t tend to resolve very quickly unfortunately,” Pollicella said.

USS Marinette was launched Oct. 31, 2020 in a small event because of the COVID-19 pandemic. Saturday’s christening ceremony properly honored the ship, its namesake and the workers whose efforts went into its construction.

The christening of this ship in particular was meaningful for the community, given that its namesake is the City of Marinette. Former Rep. Reid Ribble (R-Wis) led a community-wide effort beginning in 2011 advocating for the naming of the ship after the community. Former Secretary of the Navy Ray Mabus announced in September 2016 that LCS 25 would be named USS Marinette to honor the city where it was built. USS Marinette is the second ship named after the city; the first one (YTB-791), a Natick-class large fleet tugboat, launched in 1967 and performed tugging services in the 5th Naval District, headquartered at Norfolk, Virginia.

Marinette Mayor Steve Gensiot, among other speakers including Under Secretary of the Navy Meredith Berger will be the principal speaker at the ceremony. President and Chief Executive Officer of Fincantieri Marine Group Dario Deste, Lockheed Martin Vice President of Small Combatants and Ship Systems Steve Allen, gave a speech at the ceremony to celebrate the event. Former Governor of Michigan Jennifer Granholm was the ship’s sponsor and performed the time-honored Navy tradition of breaking a bottle of sparkling wine across the ship’s bow.

The LCS class consists of two variants, the Freedom and the Independence. Lockheed Martin leads the construction of the odd-numbered Freedom-variant hulls in Marinette while Austal USA leads the Independence variant team in Mobile, Alabama for the even-numbered ships starting from LCS 6. FMM has two more ships—LCS 29 and LCS 31—to construct before the LCS program is complete. LCS 27, USS Nantucket, was launched this past August.