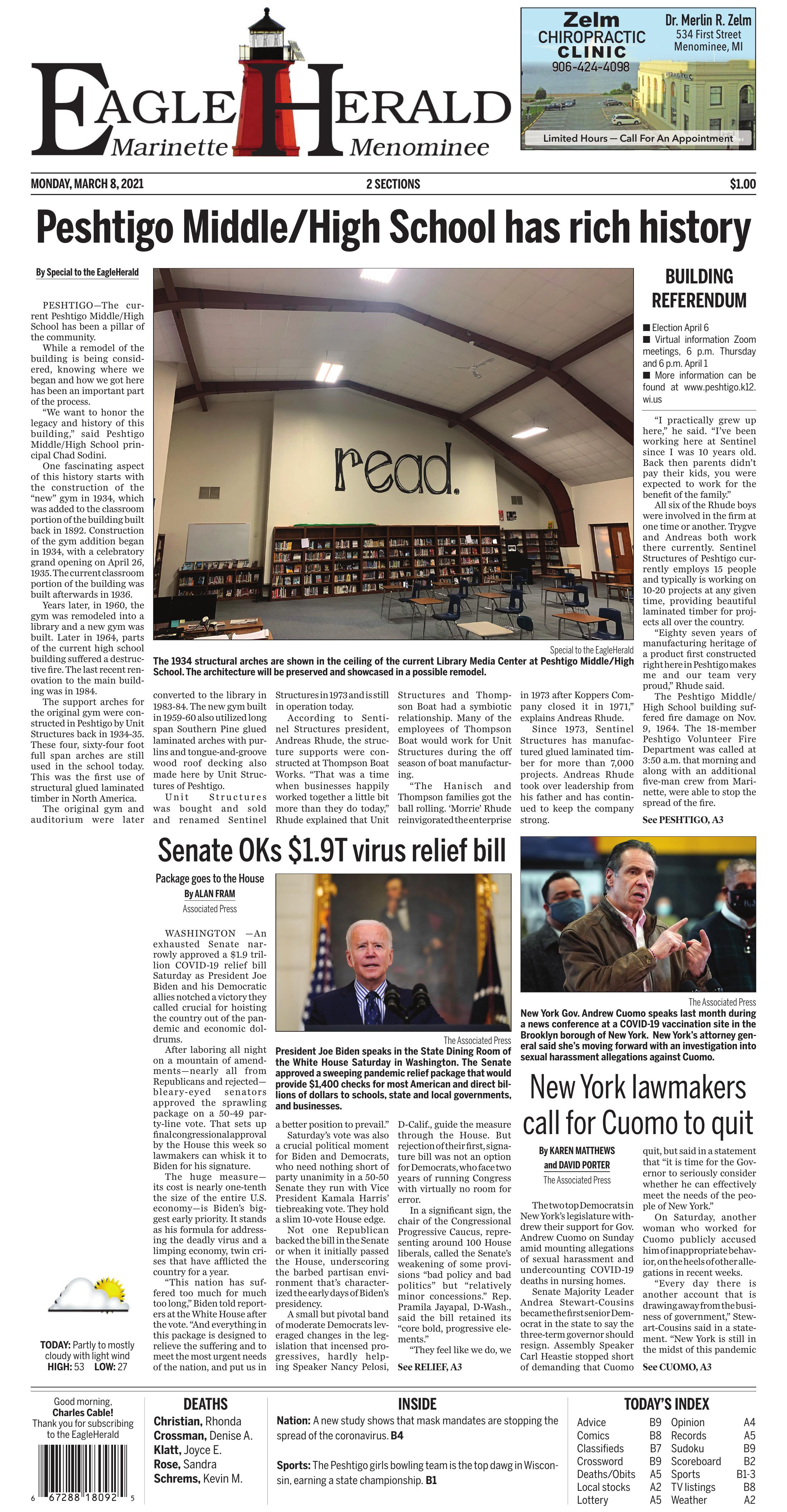 The 1934 structural arches are shown in the ceiling of the current Library Media Center at Peshtigo Middle/High School. The architecture will be preserved and showcased in a possible remodel.

PESHTIGO—The current Peshtigo Middle/High School has been a pillar of the community.

While a remodel of the building is being considered, knowing where we began and how we got here has been an important part of the process.

“We want to honor the legacy and history of this building,” said Peshtigo Middle/High School principal Chad Sodini.

Years later, in 1960, the gym was remodeled into a library and a new gym was built. Later in 1964, parts of the current high school building suffered a destructive fire. The last recent renovation to the main building was in 1984.

The support arches for the original gym were constructed in Peshtigo by Unit Structures back in 1934-35. These four, sixty-four foot full span arches are still used in the school today. This was the first use of structural glued laminated timber in North America.

The original gym and auditorium were later converted to the library in 1983-84. The new gym built in 1959-60 also utilized long span Southern Pine glued laminated arches with purlins and tongue-and-groove wood roof decking also made here by Unit Structures of Peshtigo.

Unit Structures was bought and sold and renamed Sentinel Structures in 1973 and is still in operation today.

According to Sentinel Structures president, Andreas Rhude, the structure supports were constructed at Thompson Boat Works. “That was a time when businesses happily worked together a little bit more than they do today,” Rhude explained that Unit Structures and Thompson Boat had a symbiotic relationship. Many of the employees of Thompson Boat would work for Unit Structures during the off season of boat manufacturing.

“The Hanisch and Thompson families got the ball rolling. ‘Morrie’ Rhude reinvigorated the enterprise in 1973 after Koppers Company closed it in 1971,” explains Andreas Rhude.

Since 1973, Sentinel Structures has manufactured glued laminated timber for more than 7,000 projects. Andreas Rhude took over leadership from his father and has continued to keep the company strong.

“I practically grew up here,” he said. “I’ve been working here at Sentinel since I was 10 years old. Back then parents didn’t pay their kids, you were expected to work for the benefit of the family.”

All six of the Rhude boys were involved in the firm at one time or another. Trygve and Andreas both work there currently. Sentinel Structures of Peshtigo currently employs 15 people and typically is working on 10-20 projects at any given time, providing beautiful laminated timber for projects all over the country.

The Peshtigo Middle/High School building suffered fire damage on Nov. 9, 1964. The 18-member Peshtigo Volunteer Fire Department was called at 3:50 a.m. that morning and along with an additional five-man crew from Marinette, were able to stop the spread of the fire.

Damage included a second-story science lab and the school’s 4,000-volume library, as well as several other rooms. Smoke and water damage was suffered throughout the structure, which back then housed the elementary school too.

The Peshtigo School District is looking for more information on school building history and would love to hear your stories Unique historical information and features will be highlighted in the new refurbishment. The administration intends to have a display area honoring the history of the building.

Members of the community with unique information on the Peshtigo Middle/High School building are asked to please contact Superintendent Patrick Rau at (715) 582-3677, extension 1010.