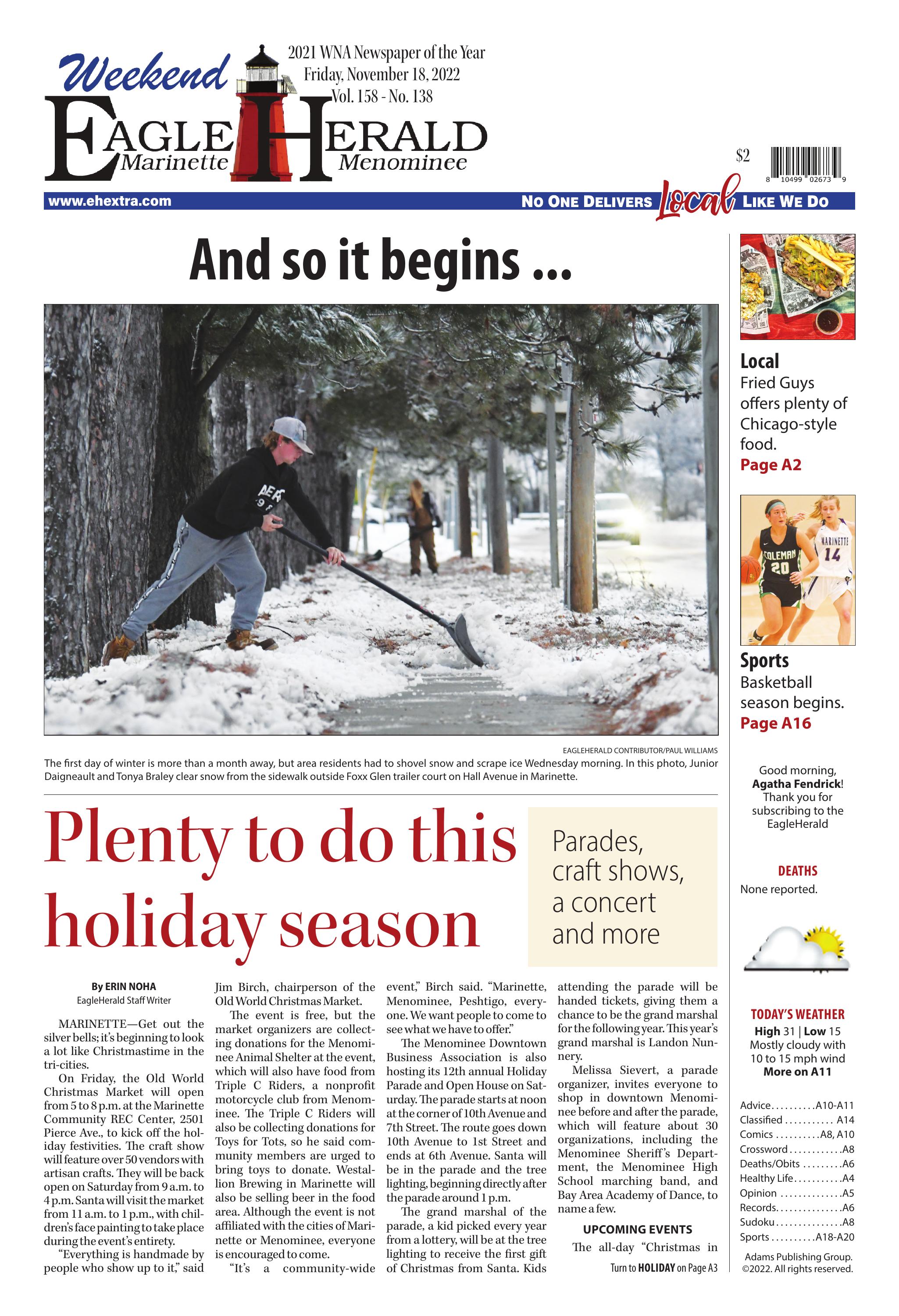 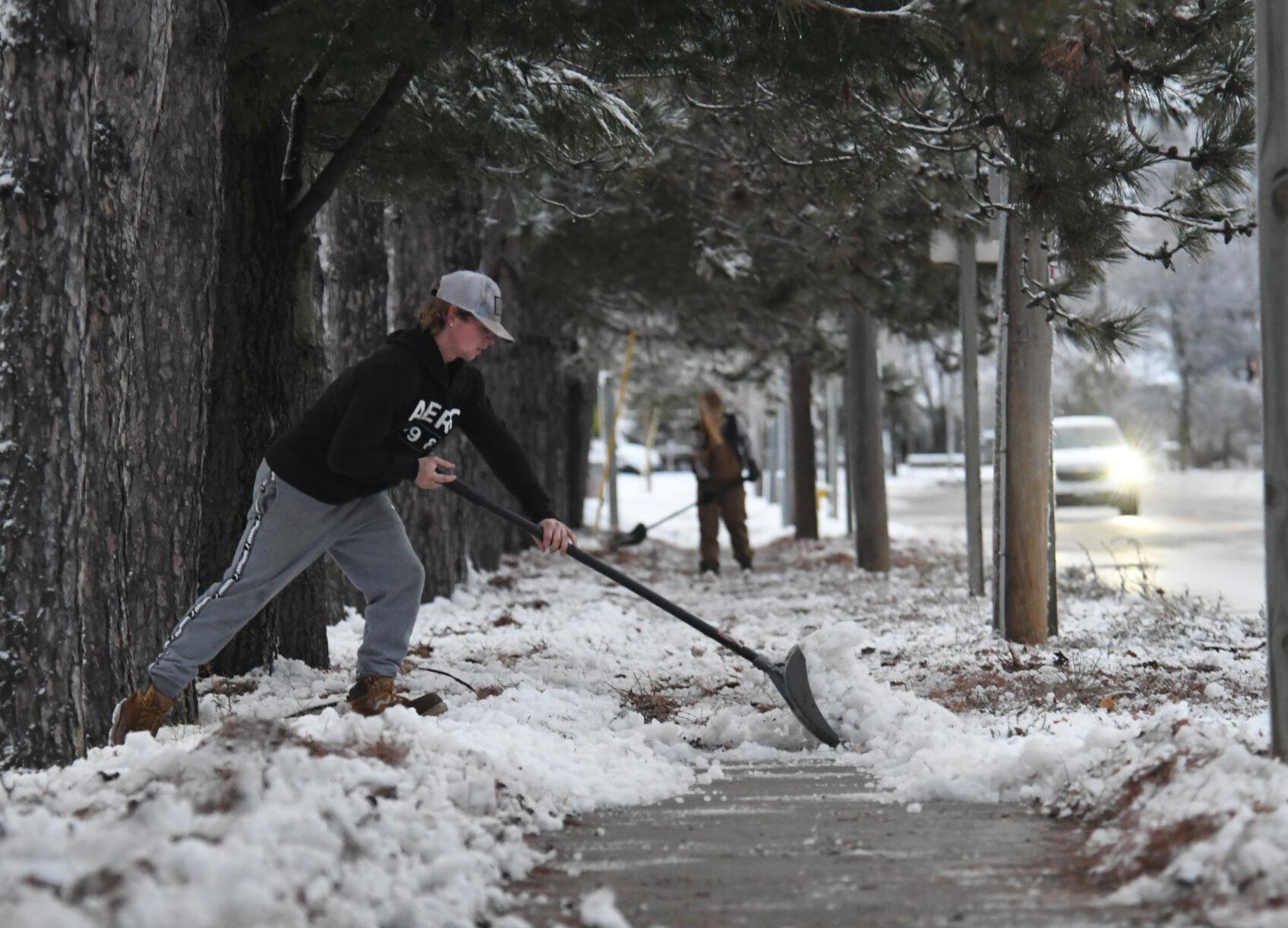 The first day of winter is more than a month away, but area residents had to shovel snow and scrape ice Wednesday morning. In this photo, Junior Daigneault and Tonya Braley clear snow from the sidewalk outside Foxx Glen trailer court on Hall Avenue in Marinette.

MARINETTE—Get out the silver bells; it’s beginning to look a lot like Christmastime in the tri-cities.

On Friday, the Old World Christmas Market will open from 5 to 8 p.m. at the Marinette Community REC Center, 2501 Pierce Ave., to kick off the holiday festivities. The craft show will feature over 50 vendors with artisan crafts. They will be back open on Saturday from 9 a.m. to 4 p.m. Santa will visit the market from 11 a.m. to 1 p.m., with children’s face painting to take place during the event’s entirety.

“Everything is handmade by people who show up to it,” said Jim Birch, chairperson of the Old World Christmas Market.

The event is free, but the market organizers are collecting donations for the Menominee Animal Shelter at the event, which will also have food from Triple C Riders, a nonprofit motorcycle club from Menominee. The Triple C Riders will also be collecting donations for Toys for Tots, so he said community members are urged to bring toys to donate. Westallion Brewing in Marinette will also be selling beer in the food area. Although the event is not affiliated with the cities of Marinette or Menominee, everyone is encouraged to come.

“It’s a community-wide event,” Birch said. “Marinette, Menominee, Peshtigo, everyone. We want people to come to see what we have to offer.”

The Menominee Downtown Business Association is also hosting its 12th annual Holiday Parade and Open House on Saturday. The parade starts at noon at the corner of 10th Avenue and 7th Street. The route goes down 10th Avenue to 1st Street and ends at 6th Avenue. Santa will be in the parade and the tree lighting, beginning directly after the parade around 1 p.m.

The grand marshal of the parade, a kid picked every year from a lottery, will be at the tree lighting to receive the first gift of Christmas from Santa. Kids attending the parade will be handed tickets, giving them a chance to be the grand marshal for the following year. This year’s grand marshal is Landon Nunnery.

Melissa Sievert, a parade organizer, invites everyone to shop in downtown Menominee before and after the parade, which will feature about 30 organizations, including the Menominee Sheriff’s Department, the Menominee High School marching band, and Bay Area Academy of Dance, to name a few.

Upcoming EventsThe all-day “Christmas in Marinette” events will take place on Saturday, Dec. 3, starting with a craft show at the Marinette Community REC Center from 9 a.m. to 3 p.m. Santa and his reindeer will make an appearance at 1 p.m., depending on the weather, said Shawn Katzbeck, director of marketing and tourism.

“We have a landing platform on the top of the REC center,” he said jokingly.

Santa Claus and Mrs. Claus will take pictures with kids from 1 to 3 p.m., with a fun Christmas background. The activity is free, and the REC Center will accept donations at the photo station.

The concession stand will be open, with no alcohol served at this event. Various Christmas carolers and singers will be present to spread holiday cheer.

To continue the festivities throughout the day, the city of Marinette will host a downtown nighttime parade that Saturday, Dec. 3, at 5 p.m. The route will run down Main Street, starting at Water Street and ending on Liberty Street. The parade will feature the Marinette High School Marching Band, ponies from the Someplace Special Ranch, city vehicles like police and fire and a surprise visit from Santa.

Jan Kust, community development specialist, recommended the spots before and after the railroad tracks, near the fire department, to watch the show, featuring decorated floats with a “best overall” winner.

“Hopefully, we have some good weather for it. We’ll keep our fingers crossed,” Kust said.

After the parade, a tree lighting ceremony will occur at 6 p.m. at the Marinette Welcome Center, 1680 Bridge St., Marinette. Santa and Marinette Mayor Steve Genisot will be there, along with cookies and hot chocolate.

“It’s for the kids,” Kust said. “That’s their chance to see the lights and see Santa and warm up with hot chocolate.”

Any business or organization interested in being in the parade can still sign up. It’s a free entry, and the deadline is Monday, Nov. 28. The theme this year is “Winter Wonderland.”

The public is invited to a free holiday movie at the Mariner at 7 p.m. following the ceremony. The film will be first-come, first-serve until the theater is full, Katzbeck said.

To round out the holiday festivities, on Dec. 16, at 7 p.m., the REC Center will host Steve March-Tormé, a jazz singer. His father wrote the multi-platinum “The Christmas Song” with Bob Wells.

The event, called “For Kids From 1 to 92: The Spirit of Christmas Music, Past and Present,” will also feature Michael Bailey from Vic Ferrari and include a full band to perform holiday classics with unique arrangements. Emmy-award-winning violinist Mark Wood, the original violinist for the Trans-Siberian Orchestra, will also perform.

Katzbeck said this group is also playing at the PAC in Appleton, so it’s a big deal this concert is coming to Marinette.

“It’s a show we would not normally see in this area,” he said. 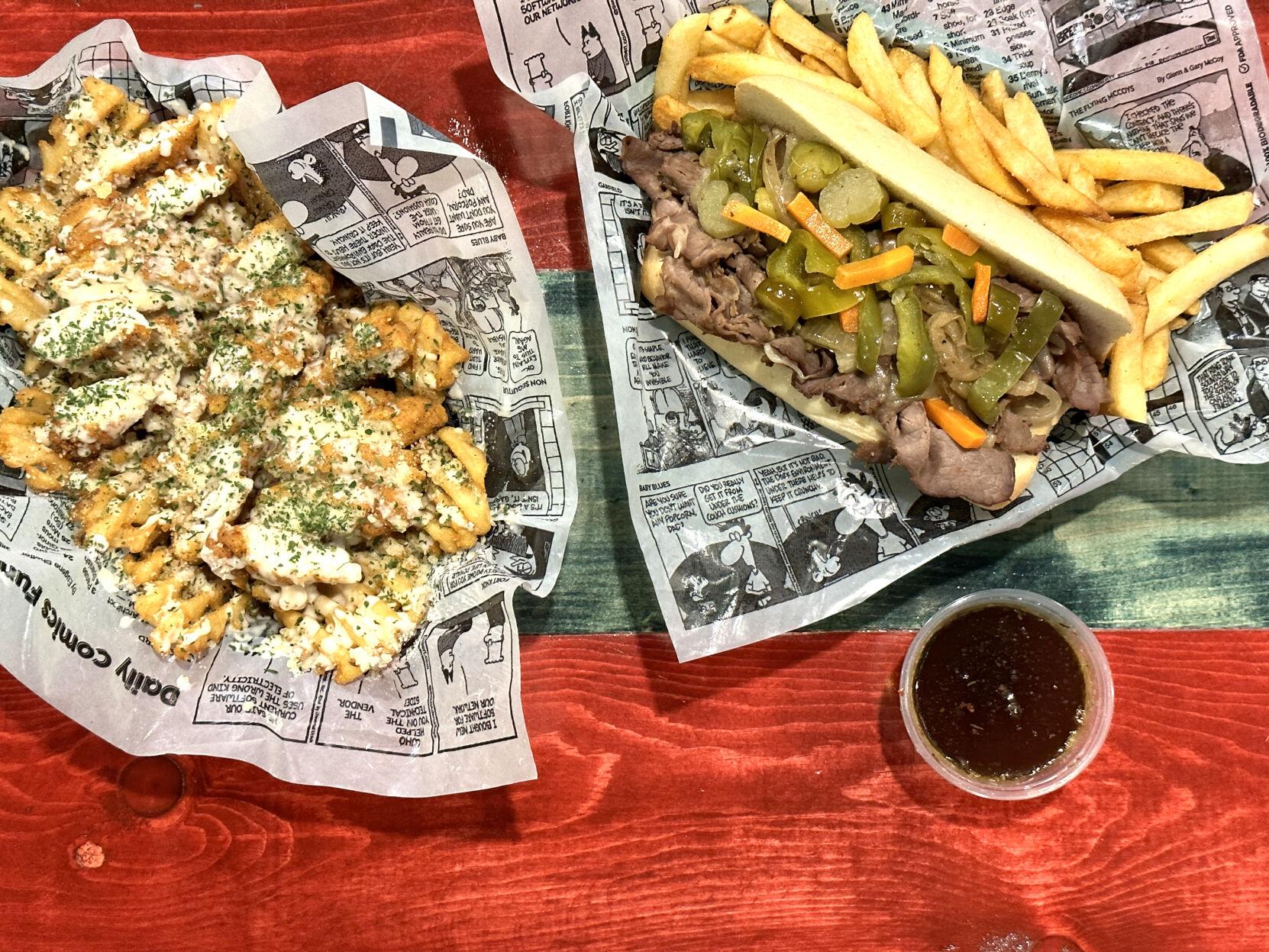 “White Widow” fries topped with chicken tenders and smothered in alfredo sauce, topped with parmesan cheese and parsley, and an Italian beef sandwich with hot giardiniera are some of the popular menu items at Fried Guys, a new fast-casual restaurant at 1704 13th St., Menominee. 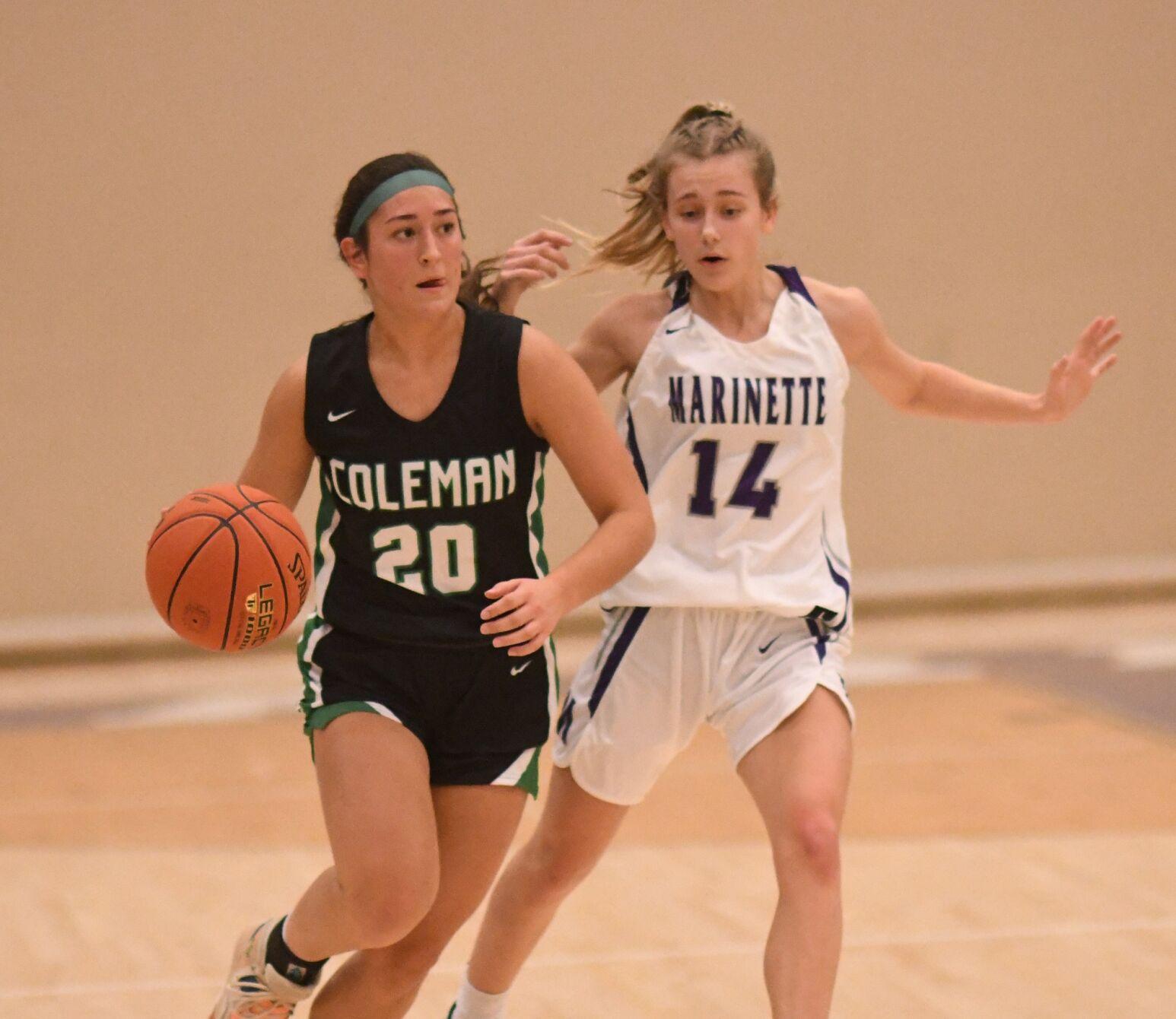 Coleman's Aubrey Bintz brings the ball up court while Marinette's Bryanna Torrko defends during the first half of Tuesday's non-conference game against the Marines.