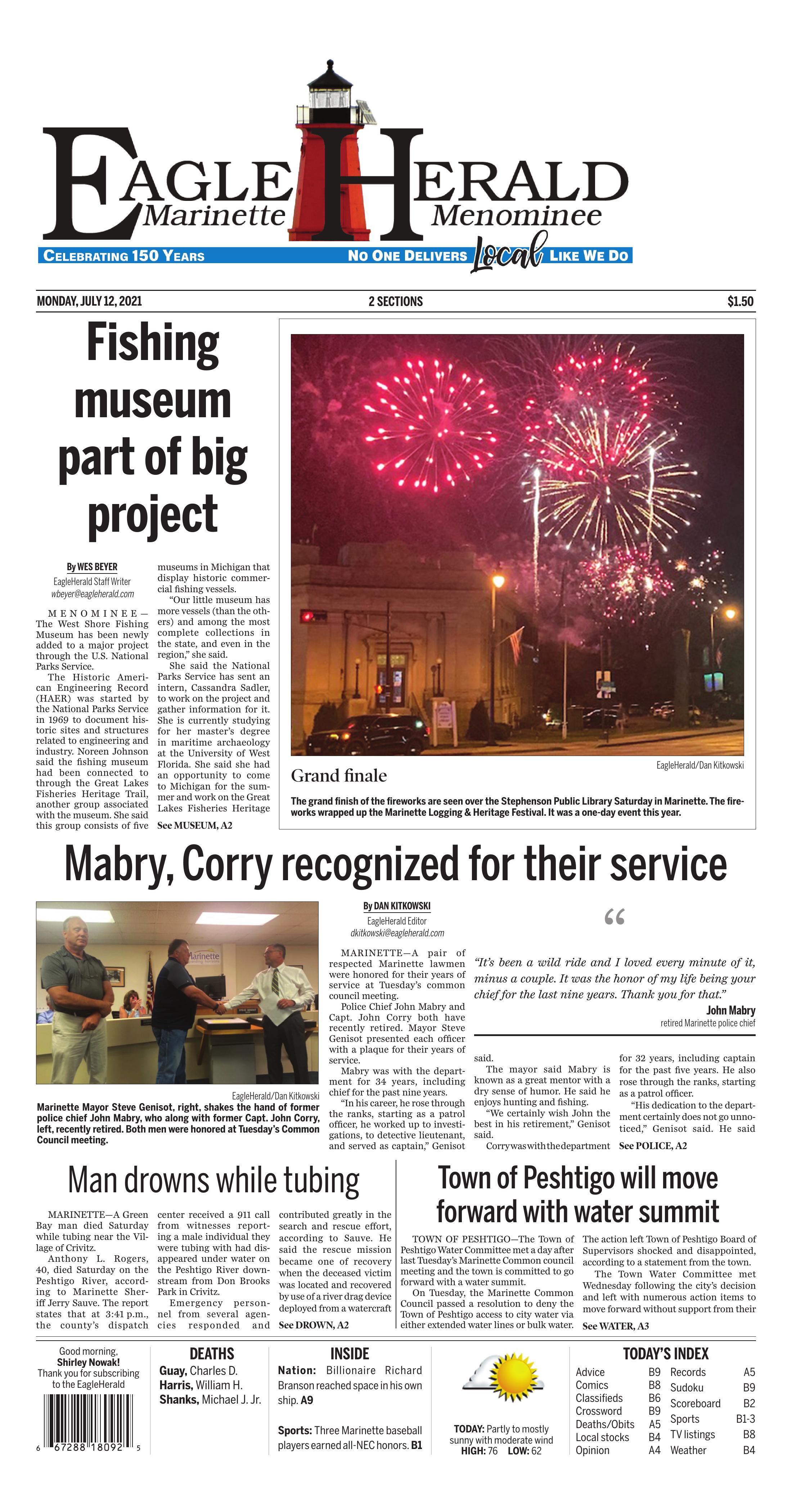 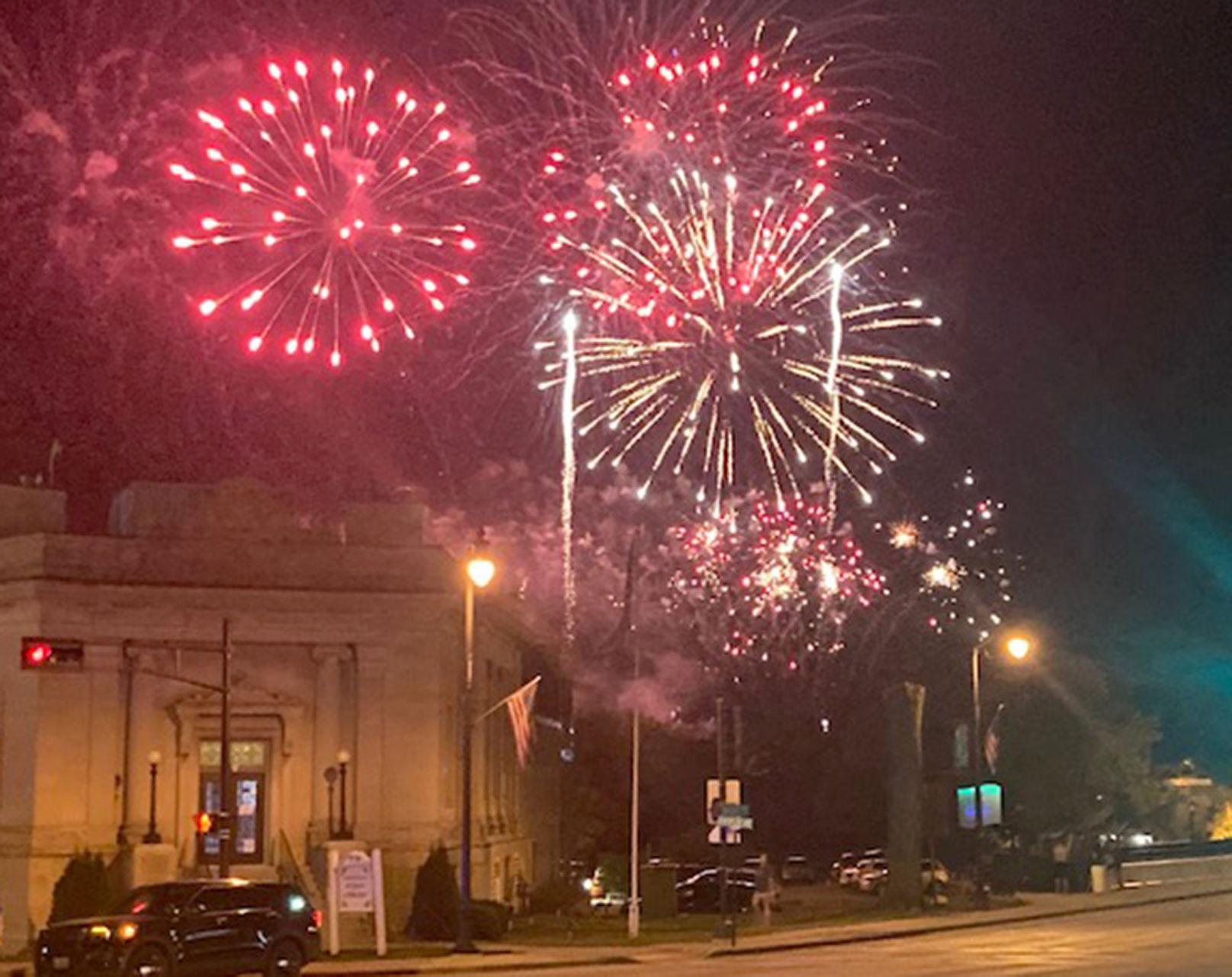 The grand finish of the fireworks are seen over the Stephenson Public Library Saturday in Marinette. The fireworks wrapped up the Marinette Logging & Heritage Festival. It was a one-day event this year.

MARINETTE—A pair of respected Marinette lawmen were honored for their years of service at Tuesday’s common council meeting.

Police Chief John Mabry and Capt. John Corry both have recently retired. Mayor Steve Genisot presented each officer with a plaque for their years of service.

Mabry was with the department for 34 years, including chief for the past nine years.

“In his career, he rose through the ranks, starting as a patrol officer, he worked up to investigations, to detective lieutenant, and served as captain,” Genisot said.

The mayor said Mabry is known as a great mentor with a dry sense of humor. He said he enjoys hunting and fishing.

“We certainly wish John the best in his retirement,” Genisot said.

Corry was with the department for 32 years, including captain for the past five years. He also rose through the ranks, starting as a patrol officer.

“His dedication to the department certainly does not go unnoticed,” Genisot said. He said Corry enjoys fishing and camping, while his top priorities are faith and family.

LaCombe said to Mabry, “Thank you for what you did and how you did it. You made all of us better and we really appreciate it.”

The retirees spoke about the occasion.

“Thank you everyone for being here. I appreciate it,” Mabry said. “Thank you to the City of Marinette, the City of Marinette Police Department, (police) commissioners. It’s been a wild ride and I loved every minute of it, minus a couple. It was the honor of my life being your chief for the last nine years. Thank you for that.”

Mabry said anything positive that happened while he was in office is directly because of the men and women in his department. “That level of service, and then some, will continue,” he said.

Mabry also thanked his family, including his wife, two daughters and extended family.

“It’s been an honor,” he said. “The City of Marinette is a great place to raise a family, which is what I did. I will always be thankful for the opportunity I was given by all of you. Thank you.”

Corry thanked Mabry for making him his captain.

“We both have the understanding that the citizens of Marinette are going to be served very well with the incoming administration,” he said. “They have been making us look good for a lot of years.

“As I stated before, faith and family are the two most important things to me. I consider those I’ve been working with my extended family. Thank you before I begin tearing up. It’s been a wild ride.”

MARINETTE—A Green Bay man died Saturday while tubing near the Village of Crivitz.

Anthony L. Rogers, 40, died Saturday on the Peshtigo River, according to Marinette Sheriff Jerry Sauve. The report states that at 3:41 p.m., the county’s dispatch center received a 911 call from witnesses reporting a male individual they were tubing with had disappeared under water on the Peshtigo River downstream from Don Brooks Park in Crivitz.

Emergency personnel from several agencies responded and contributed greatly in the search and rescue effort, according to Sauve. He said the rescue mission became one of recovery when the deceased victim was located and recovered by use of a river drag device deployed from a watercraft driven by a conversation warden from the Wisconsin DNR, who was assisted by sheriff’s deputies.

The man’s body was transferred to the shoreline where assistant medical examiners from the Marinette County Medical Examiner’s Office pronounced him dead at 6:05 p.m., according to the sheriff.

The report states that contributing factors may have included that the male was not wearing a personal flotation device at the time he went in the water, and that he may not have had strong swimming skills. An autopsy will take place Monday.

Other agencies involved besides the sheriff’s office and the DNR, include the Crivitz Police Department, fire departments from the Village of Crivitz and Town of Stephenson, EMS personnel from Crivitz Rescue, the Marinette County Dispatch Center and the Marinette County Medical Examiner’s Office.

Noreen Johnson, right, introduces Sarah Siegwart, center, and her daughter Delilah Siegwart to the “Kate A” Sunday at the West Shore Fishing Museum in Menominee. The “Kate A” was a fishing tug for Orin Angwall, a former mayor of Marinette and commercial fisherman.

MENOMINEE—The West Shore Fishing Museum has been newly added to a major project through the U.S. National Parks Service.

The Historic American Engineering Record (HAER) was started by the National Parks Service in 1969 to document historic sites and structures related to engineering and industry. Noreen Johnson said the fishing museum had been connected to through the Great Lakes Fisheries Heritage Trail, another group associated with the museum. She said this group consists of five museums in Michigan that display historic commercial fishing vessels.

“Our little museum has more vessels (than the others) and among the most complete collections in the state, and even in the region,” she said.

She said the National Parks Service has sent an intern, Cassandra Sadler, to work on the project and gather information for it. She is currently studying for her master’s degree in maritime archaeology at the University of West Florida. She said she had an opportunity to come to Michigan for the summer and work on the Great Lakes Fisheries Heritage Trail project, and this is one of her earlier stops throughout the state.

“I originally went to school for marine biology at the University of Rhode Island,” Sadler said. “I had some wonderful history and anthropology teachers in the maritime focus. I did my first field school in Bermuda working on an Irish wreck and fell in love with the field.”

Sadler is stationed in Alpena, Michigan, for her internship and came to Menominee on Saturday as one of about 10 other places in Michigan where she will be working. She will be in the area working with the museum for several days and was on site Sunday for the museum’s Marvelous Machines and Skills event. Johnson said Sadler will be primarily documenting information on the “Kate A,” which was the fishing tugboat of Orin Angwall, a fisherman and former mayor of the City of Marinette.

“She has a whole protocol that she follows to document as much information as we have,” Johnson said.

Sunday’s event saw demonstrations on a variety of skills and machines, including a blacksmith.

“One of the most exciting things is that we’ll have a working Kahlenberg engine. It was the engine that fishermen prized to power their boats when they went out on the water, and it takes up a whole trailer,” Johnson said.

The museum is located near Bailey County Park, just off of Highway M-35. Johnson said this museum is one of the top three museums of its kind in the State of Michigan.

TOWN OF PESHTIGO—The Town of Peshtigo Water Committee met a day after last Tuesday’s Marinette Common council meeting and the town is committed to go forward with a water summit.

On Tuesday, the Marinette Common Council passed a resolution to deny the Town of Peshtigo access to city water via either extended water lines or bulk water. The action left Town of Peshtigo Board of Supervisors shocked and disappointed, according to a statement from the town.

The Town Water Committee met Wednesday following the city’s decision and left with numerous action items to move forward without support from their neighboring city.

“It is unconscionable to me to remove the city from a conversation before the discussion has even begun, however we will rapidly move forward with remaining options” said Cindy Boyle, Town of Peshtigo chairperson.

Within just over 10 weeks, the newly elected Town of Peshtigo Board has moved at a significant pace in an effort to be fully informed and appropriately positioned to provide safe drinking water to residents as soon as possible, Boyle stated.

She continued, “We were starting from a place of zero resources, no municipal lawyer, no legal records on hand, no environmental lawyer, no environmental consultant. An enormous amount of progress has been made and our hard-working board isn’t about to let up now. Communication between remaining stakeholders and the public is key and the Town is committed to staying the course.”

The town plans to move forward with a water summit, which will include Johnson Controls/Tyco, the City of Peshtigo and the Wisconsin DNR.