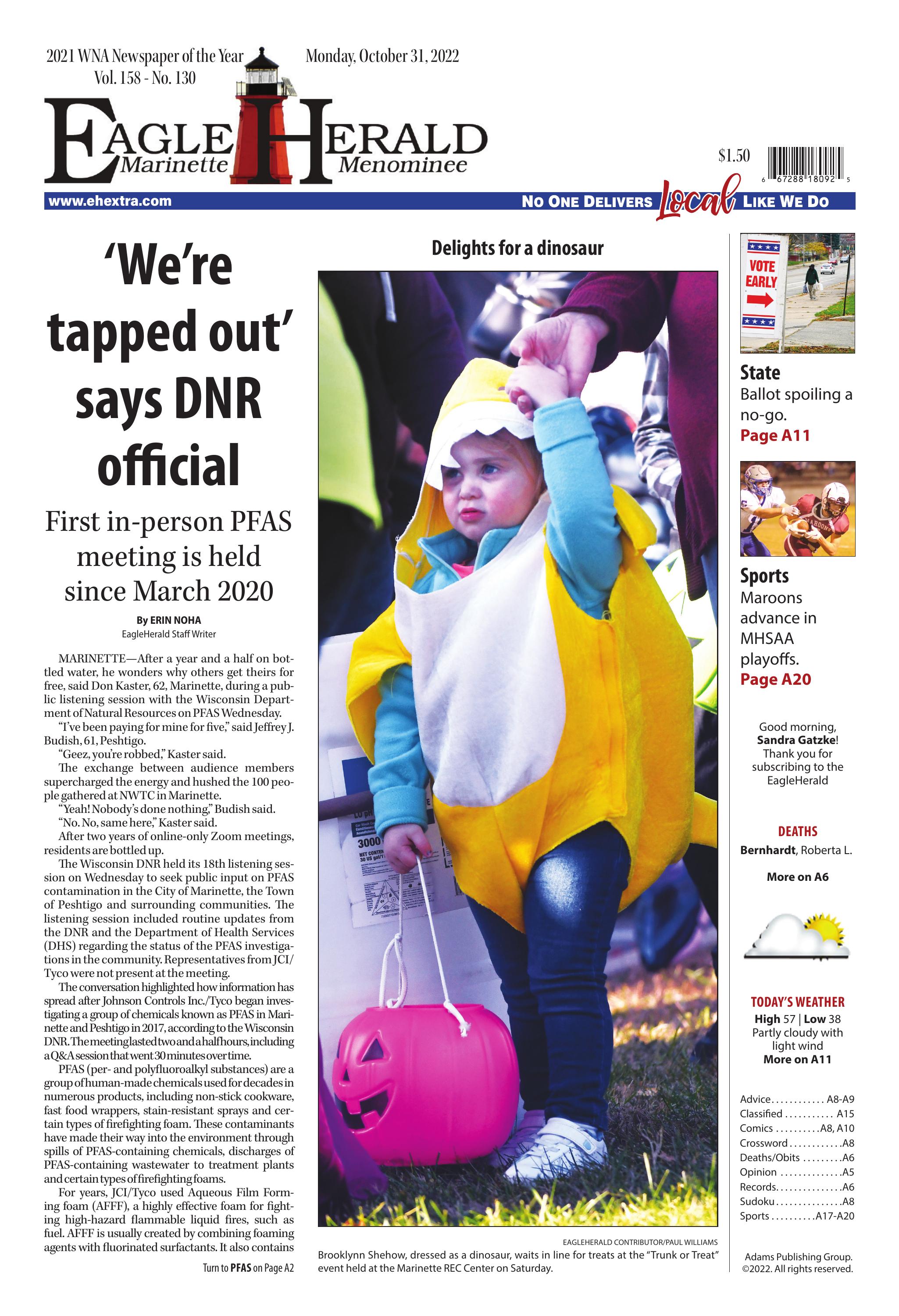 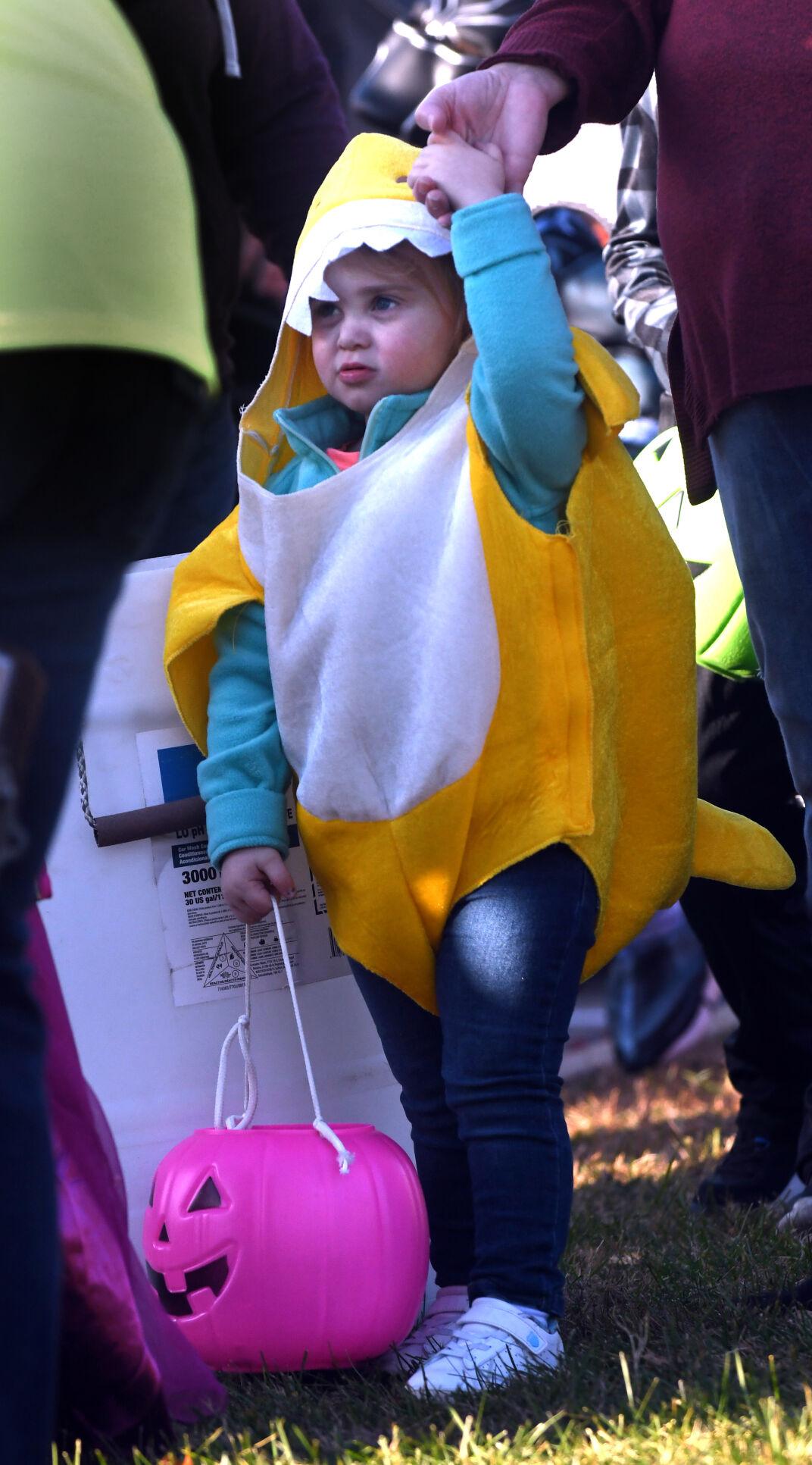 Brooklynn Shehow, dressed as a dinosaur, waits in line for treats at the “Trunk or Treat” event held at the Marinette REC Center on Saturday.

Patrick Gorski, DNR Water Quality Program Research Scientist, discusses the relationship between PFAS and foam accumulation on the surface water of lakes at the DNR’s public listening session for PFAS last Wednesday at NWTC in Marinette. The listening session was the first in-person meeting since COVID-19, with public discussion lasting an hour and a half.

MARINETTE—After a year and a half on bottled water, he wonders why others get theirs for free, said Don Kaster, 62, Marinette, during a public listening session with the Wisconsin Department of Natural Resources on PFAS Wednesday.

“I’ve been paying for mine for five,” said Jeffrey J. Budish, 61, Peshtigo.

The exchange between audience members supercharged the energy and hushed the 100 people gathered at NWTC in Marinette.

After two years of online-only Zoom meetings, residents are bottled up.

The Wisconsin DNR held its 18th listening session on Wednesday to seek public input on PFAS contamination in the City of Marinette, the Town of Peshtigo and surrounding communities. The listening session included routine updates from the DNR and the Department of Health Services (DHS) regarding the status of the PFAS investigations in the community. Representatives from JCI/Tyco were not present at the meeting.

The conversation highlighted how information has spread after Johnson Controls Inc./Tyco began investigating a group of chemicals known as PFAS in Marinette and Peshtigo in 2017, according to the Wisconsin DNR. The meeting lasted two and a half hours, including a Q&A session that went 30 minutes over time.

PFAS (per- and polyfluoroalkyl substances) are a group of human-made chemicals used for decades in numerous products, including non-stick cookware, fast food wrappers, stain-resistant sprays and certain types of firefighting foam. These contaminants have made their way into the environment through spills of PFAS-containing chemicals, discharges of PFAS-containing wastewater to treatment plants and certain types of firefighting foams.

For years, JCI/Tyco used Aqueous Film Forming foam (AFFF), a highly effective foam for fighting high-hazard flammable liquid fires, such as fuel. AFFF is usually created by combining foaming agents with fluorinated surfactants. It also contains PFAS, which they found in high concentrations on its property. That PFAS then spread into residents’ drinking water.

Regarding the bottled water issue, Christine Sieger, DNR Remediation and Redevelopment Program director, said the DNR spent between $600,000 to $700,000 in bottled water for people with PFAS issues last year.

“We’re tapped out,” she said. “We don’t have any more money. Authority is one thing, and money is another.”

Suppose DHS or the DNR puts a health advisory on a well. In that case, it triggers the authority for them to provide bottled water, but even then, the DNR only has so much in its budget, she said.

JCI/Tyco has agreed to provide water to people whose wells have PFAS at certain levels within the Potable Well Sampling Area (PWSA). The DNR is the only mechanism providing replacement water outside of that area.

It also can’t monitor what it doesn’t don’t know about. Corporations must disclose what’s in its products for the federal government to consider if they should be regulated. The state can’t figure out how to sample for things they aren’t aware of on its own, she said, as the conversation with audience members turned toward when JCI/Tyco discovered the PFAS.

“When that chain is broken, it doesn’t happen,” she said. “If corporations don’t expose that they’re using this, the rest of the pieces don’t fall into place.”

The DNR is trying to figure out what is safe and what to do in the interim, said Alyssa Sellwood, DNR Remediation and Redevelopment Project Manager.

“We don’t want to wait until we get to the finish line to start taking action,” she said. “These are the interim actions, things that are happening while site investigation is ongoing. Interim doesn’t necessarily mean temporary or insufficient. It just means that these are actions we’re taking while there are still questions to be answered and addressed through the site investigation process.”

The DNR shared its updates for the meeting:

• The DNR still doesn’t have a picture yet on where the contamination is spreading, said Sellwood. Results are wrapping up in winter as JCI/Tyco completes their sampling of wells in the area, which they will then report to the DNR, she said.

• The EPA will release a new maximum contaminant level at the end of the year, said Nathan Kloczko, Wisconsin Department of Health Services Site Evaluation Program Coordinator. Earlier this summer, the EPA issued updated interim health advisories for PFOA at 0.004 parts per trillion (ppt) and PFOS at 0.02 ppt, he said. PFOA and PFOS are two variations of PFAS. Burton said the interim advisories are not the same as the maximum contaminant level. The DHS says there should be public health action at 20 ppt, Kloczko said.

• In September, JCI/Tyco finished its $25 million Groundwater Extraction & Treatment System (GETS) that will mitigate the highest concentrations of PFAS. The DNR will hopefully be able to report on how that’s going at the next meeting in spring, Sellwood said.

The DNR said it does not have information on the location or date for the next meeting, but it will take place in the spring.

A sign is seen outside a polling station Tuesday in Milwaukee. 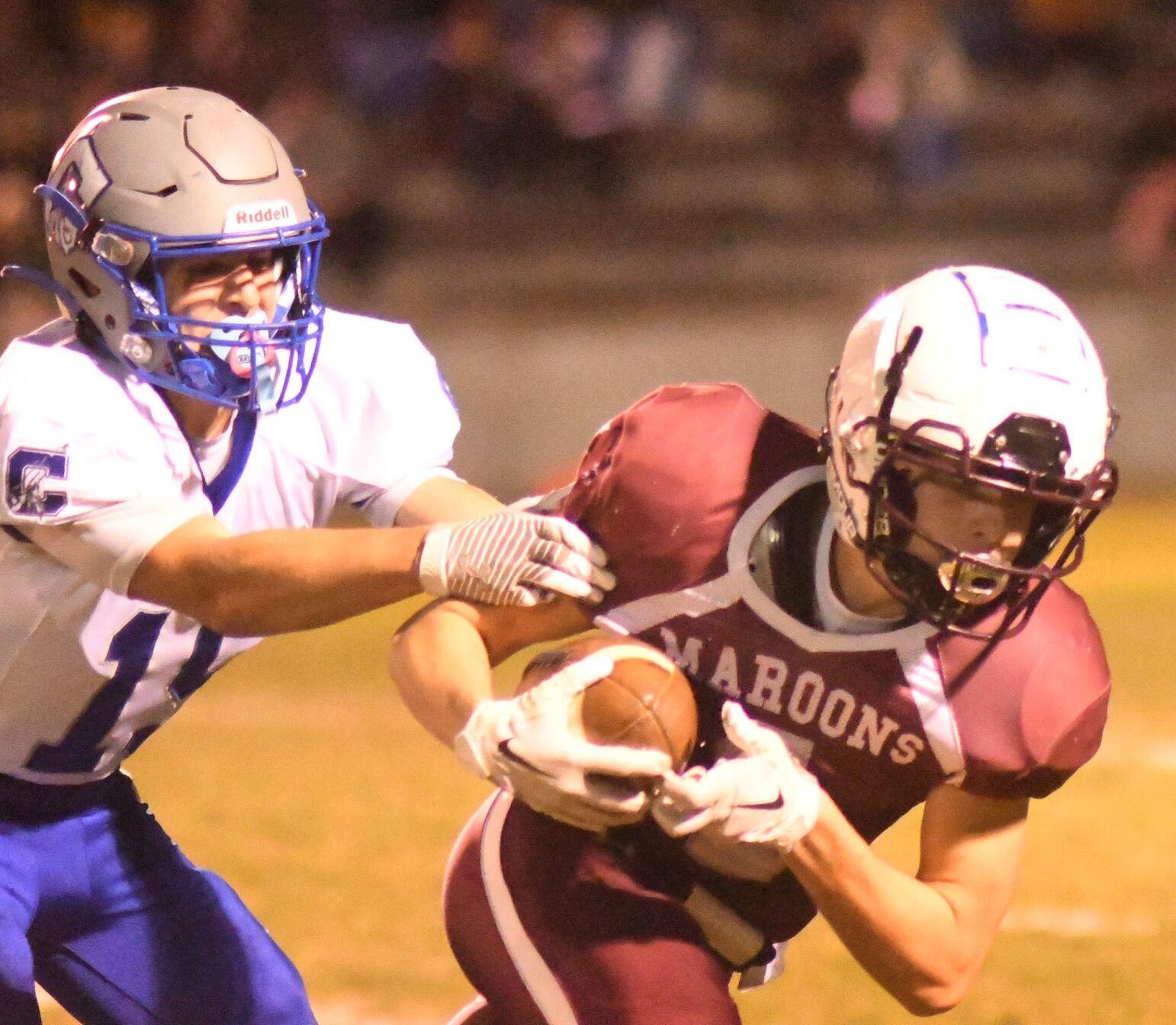 Menominee’s Nathan Komp hauls in a pass from Trevor Theuerkauf during the first quarter of Friday’s MHSAA Division 6 playoff game between the Maroons and Calumet at Walton Blesch field.