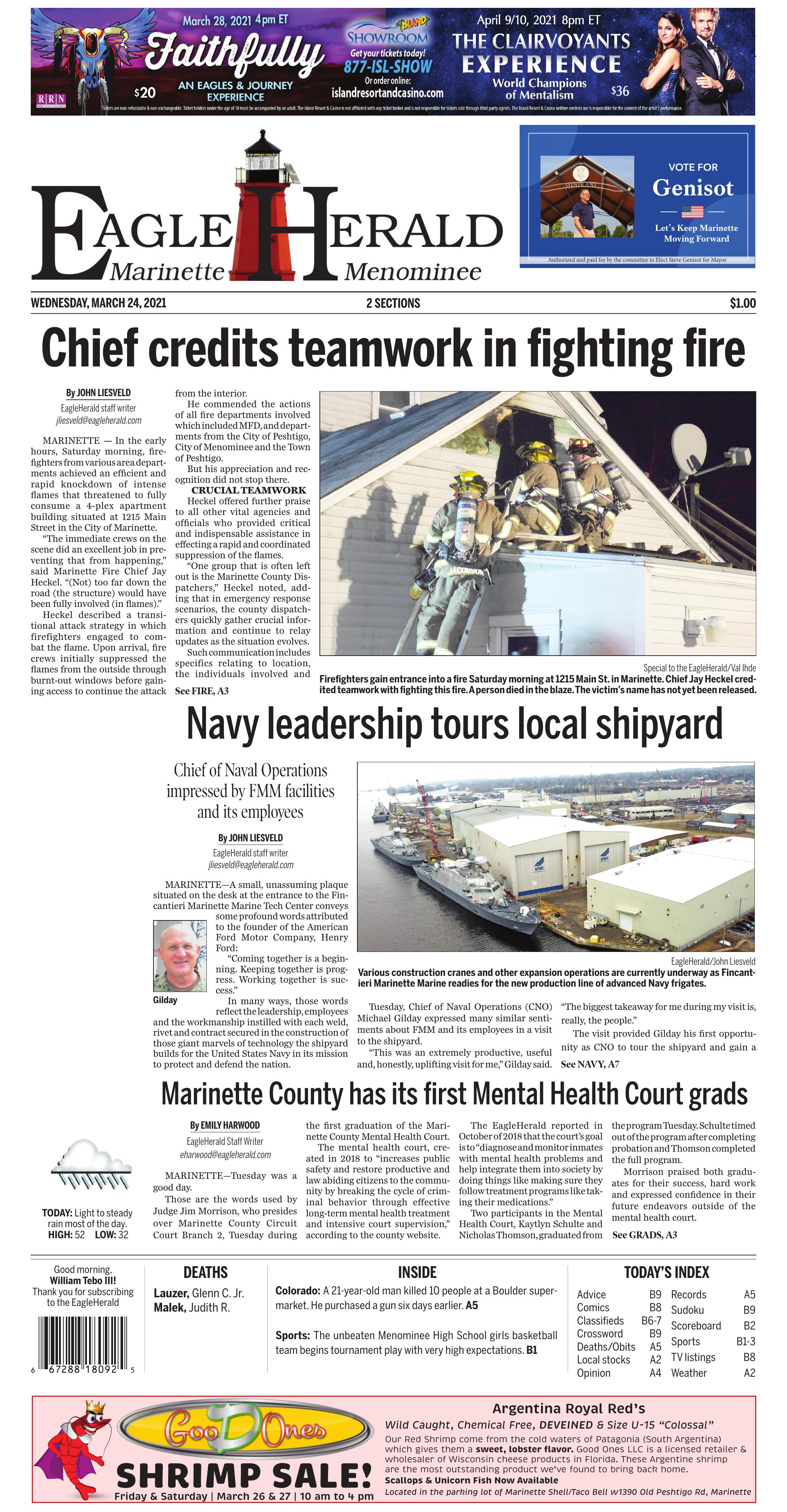 News
hot featured
Weekend fire, across the board, a model of teamwork

Firefighters gain entrance into a fire Saturday morning at 1215 Main St. in Marinette. Chief Jay Heckel credited teamwork with fighting this fire. A person died in the blaze. The victim’s name has not yet been released.

MARINETTE — In the early hours, Saturday morning, firefighters from various area departments achieved an efficient and rapid knockdown of intense flames that threatened to fully consume a 4-plex apartment building situated at 1215 Main Street in the City of Marinette.

“The immediate crews on the scene did an excellent job in preventing that from happening,” said Marinette Fire Chief Jay Heckel. “(Not) too far down the road (the structure) would have been fully involved (in flames).”

Heckel described a transitional attack strategy in which firefighters engaged to combat the flame. Upon arrival, fire crews initially suppressed the flames from the outside through burnt-out windows before gaining access to continue the attack from the interior.

He commended the actions of all fire departments involved which included MFD, and departments from the City of Peshtigo, City of Menominee and the Town of Peshtigo.

But his appreciation and recognition did not stop there.

Heckel offered further praise to all other vital agencies and officials who provided critical and indispensable assistance in effecting a rapid and coordinated suppression of the flames.

“One group that is often left out is the Marinette County Dispatchers,” Heckel noted, adding that in emergency response scenarios, the county dispatchers quickly gather crucial information and continue to relay updates as the situation evolves.

Additionally, dispatchers maintain the necessary communication to coordinate the synchronized teamwork it takes for those various agencies to successfully and safely address any emergency, including Saturday’s fire.

“We are the true first responders, paging out rescue, fire and EMS (Emergency Medical Services),” Marinette County Communications Director, Kirsten Burmeister told the EagleHerald. “As we take on the stress with the caller, our job is to remain calm.”

Burmeister knows firsthand the importance of that communication. She started with Marinette County as a dispatcher, serving in the position from 1992 to 1999. Her experience allowed her to speak directly to the interagency cooperation that occurred Saturday.

“I know that, in (this weekend’s) fire call, there was great teamwork involved,” she said.

“And the caller, you have to give credit to the caller,” Burmeister said, explaining that the resident who reported the fire, supplied dispatchers with the kind of precise information needed to better facilitate a response.

Burmeister also recognized the dispatchers on the floor at the dispatch center at the time of Saturday’s emergency call. Working the phones, a trainee and her trainer successfully orchestrated the rapid deployment of all agencies involved.

“Right now, we have not heard anything from the (state of Wisconsin Department of Justice) Fire Marshal,” Heckel said. “They probably won’t release any information until the result of the autopsy.”

Heckel also noted that two tenants of the build attempted to gain entry to the apartment of the deceased individual.

“But the heat and smoke were too much,” he said.

Those two individuals did make it out safely.

Heckel also informed of the protocol followed in the aftermath of such an emergency. The fire department coordinates the investigation with the investigators which can include MPD as well as the Marinette County Medical Examiners Office.

“If there is a high dollar loss or loss of life, the determination is made whether to get ahold of DOJ Fire Marshall,” he said. “And then we communicate with them for learning and educational purposes … and in providing information.”

Pending the results of the investigation, Heckel stated that the cause of the blaze remains undetermined.

Additionally, identification of the victim and cause of death has not been released.

MARINETTE—A small, unassuming plaque situated on the desk at the entrance to the Fincantieri Marinette Marine Tech Center conveys some profound words attributed to the founder of the American Ford Motor Company, Henry Ford:

In many ways, those words reflect the leadership, employees and the workmanship instilled with each weld, rivet and contract secured in the construction of those giant marvels of technology the shipyard builds for the United States Navy in its mission to protect and defend the nation.

Tuesday, Chief of Naval Operations (CNO) Michael Gilday expressed many similar sentiments about FMM and its employees in a visit to the shipyard.

“This was an extremely productive, useful and, honestly, uplifting visit for me,” Gilday said. “The biggest takeaway for me during my visit is, really, the people.”

The visit provided Gilday his first opportunity as CNO to tour the shipyard and gain a firsthand assessment of the FMM team and its progress toward the necessary foundational work as FMM readies itself for construction of the Navy’s FFG Constellation Class Frigate.

The Navy awarded FMM the multi-billion dollar frigate contract April 30 last year. The contract includes the procurement of 20 guided-missile frigates over the next several years.

According to FMM Chief Executive Officer Jan Allman, shipyard workers aim to begin cutting steel for the first frigates later this year. Additionally, she expressed much encouragement in the more $200 million shipyard capital expansion projects currently underway in Wisconsin. In addition to improvements to various shipyard buildings to enable them to facilitate the fabrication of the new frigates, the capital expansion includes the largest ship lift in the nation. The new lift will replace the dramatic splash of side launches into the Menominee River, which draws many area spectators Instead the lift will gently lower ships into the water.

Shipyard expansion not only includes the construction of new equipment and facilities but also the growth of the FMM workforce, a significant benefit as the nation emerges from the pandemic and the economic hardships it produced.

“For me, it’s very rewarding being in the state of Wisconsin,” Allman said. “And to be able to support Wisconsinites as well as Michigan (residents) … We are proud to be able to offer jobs where other places are not.”

She added that the shipyard is currently searching for new workers to join the force.

The admiral also recognized the time and effort that FMM’s employees put toward the kind of discipline and awareness that helps maintain the productivity and safety of shipyard employees.

“The workforce has been here day in and day out through the pandemic,” Gilday said. “They are dedicated and also very innovative. You get a feeling that these are patriots that … love what they are doing, are proud of what they are doing and they are proud of the (U.S.) Navy and the (U.S.A) … The production line—that conveyor belt of ships—continues to roll. It just says a lot about, not only the talent that you have here, but the potential for further growth.”

Allman added that such resolute dedication serves as a testimony of the people of FMM and their successful manufacture of products that serve and protect the Navy and the nation.

“I really have to say, it’s a tribute to our workforce (that), in the history of our (shipyard), we’ve never shut down, no matter what has faced against us,” she said.

According to Gilday, the nation’s leadership feels that China represents a strategic competitor facing the U.S. Navy and nation. For that reason, he believes that the U.S. still needs a “bigger and more capable Navy.”

“And it is shipyards like this one that are going to get us there,” he said. “(FMM) has a long history of producing world-class ships and world-class warship for the United States Navy.”

After the Admiral’s tour, Allman expressed appreciation for the business that the U.S. Navy continues to provide FMM, which has kept the shipyard’s workforce active and productive.

“That is the legacy that we leave this yard ... that, for many years to come, we have product to build and stability for this local community,” she said.

Prior to his current role as the 32nd Chief of Naval Operations to which he posted in 2019, Admiral Gilday, native of Lowell, Massachusetts and a graduate of the U.S. Naval Academy, earned a master’s degree from the Harvard Kennedy School and the National War College.

He is also the recipient of numerous awards that include the Bronze Star, Combat Action Ribbon, Defense Distinguished Service Medal, and others.

Kaytlyn Schulte receives her certificate of completion from the Marinette County Mental Health, Tuesday. She is one of the first graduates of the program.

MARINETTE—Tuesday was a good day.

The mental health court, created in 2018 to “increases public safety and restore productive and law abiding citizens to the community by breaking the cycle of criminal behavior through effective long-term mental health treatment and intensive court supervision,” according to the county website.

The EagleHerald reported in October of 2018 that the court’s goal is to “diagnose and monitor inmates with mental health problems and help integrate them into society by doing things like making sure they follow treatment programs like taking their medications.”

Two participants in the Mental Health Court, Kaytlyn Schulte and Nicholas Thomson, graduated from the program Tuesday. Schulte timed out of the program after completing probation and Thomson completed the full program.

Morrison praised both graduates for their success, hard work and expressed confidence in their future endeavors outside of the mental health court.

“You should take a minute and be proud of yourself, because this isn’t easy,” Morrison told Schulte. He said if Schulte continues on the path that she is currently on she will be a “fantastic success.”

“We’ve learned in the court that having a strong alumni group was really helpful: Helpful for the alumni and helpful for the participants.”

Thomson is the first participant of the Marinette County Mental Health Court and the first official graduate of the completed program.

“I think it’s fair to say that you grew up,” Morrison said. “The situations you found yourself in early on, running and hiding from police, were the actions of a kid. You were 18, 19-years-old at the time and you had a tremendous amount of immaturity at the time, but you’re not the same person.

“You’re not the say guy anymore, you’re a delightful young man. You are a guy who has found your way and who is going to school full time. You understand what your needs are and what your tools are and we are very proud of you. I am very excited for your success.”

Morrison explained that Thomson is now a fulltime student who plans to have a career in a few years. “You had the guts to say, ‘no, I don’t think I want to get a job, that’s a short-term solution. I want to go to school and get a career.’”

Morrison said Thomson had a “Tremendous amount of help” to get to where he is today, but ultimately, Thompson made the choices and put in the work himself to become the man he is today.

After presenting Schulte and Thomson their certifications of completion, Morrison also took the time to praise the other participants of the Marinette County Mental Health Court for their own progress and said he felt they were all on the right track.