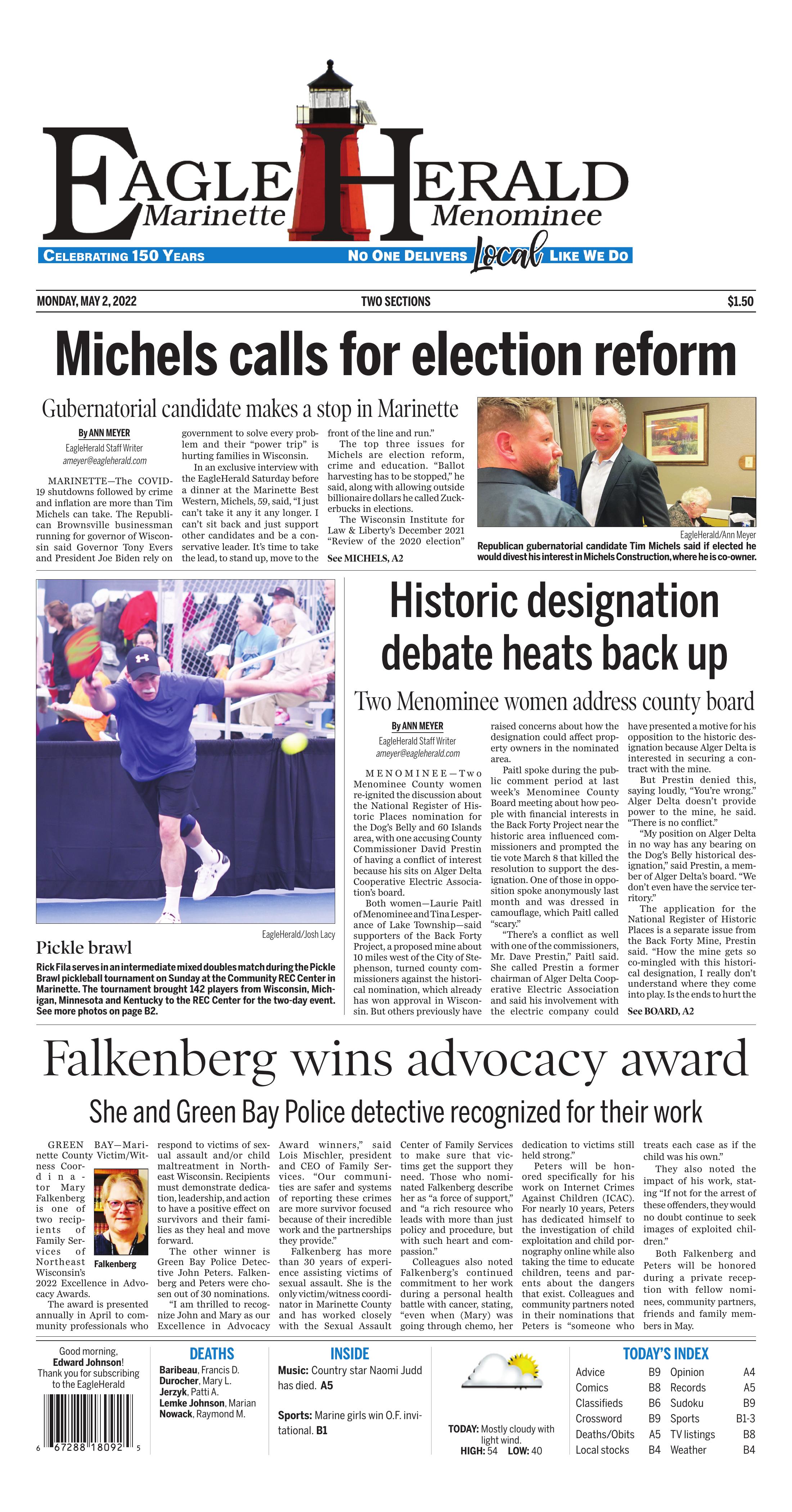 Republican gubernatorial candidate Tim Michels said if elected he would divest his interest in Michels Construction, where he is co-owner.

MARINETTE—The COVID-19 shutdowns followed by crime and inflation are more than Tim Michels can take. The Republican Brownsville businessman running for governor of Wisconsin said Governor Tony Evers and President Joe Biden rely on government to solve every problem and their “power trip” is hurting families in Wisconsin.

In an exclusive interview with the EagleHerald Saturday before a dinner at the Marinette Best Western, Michels, 59, said, “I just can’t take it any it any longer. I can’t sit back and just support other candidates and be a conservative leader. It’s time to take the lead, to stand up, move to the front of the line and run.”

The top three issues for Michels are election reform, crime and education. “Ballot harvesting has to be stopped,” he said, along with allowing outside billionaire dollars he called Zuckerbucks in elections.

The Wisconsin Institute for Law & Liberty’s December 2021 “Review of the 2020 election” said grants from the nonprofit Center for Technology and Civic Life, which Facebook founder Mark Zuckerberg funded with generous contributions, were used to get-out-the-vote in 2020 and benefited Biden. The Wisconsin Institute attributed 8,000 votes for Biden to the grants.

Michels is the fourth Republican to announce his candidacy for Wisconsin governor. Rebecca Kleefisch, the lieutenant governor in former Gov. Scott Walker’s administration, State Rep. Timothy Ramthun of Campbellsport and Kevin Nicholson, a U.S. Senate candidate in 2018, also are running.

“We announced this past Monday but the military commander in me had everything organized and ready to go. That’s the way you do things. You don’t build an airplane as you’re flying it. We have an A-plus team put together. We have a great message and we’re going to win,” Michels said.

Michels, the youngest of Dale and Ruth Michels’ four sons, was a Reserve Officers’ Training Corps student at St. Norbert in De Pere and served in the Army for 12 years.

“We need to have proper control of early voting,” he said. “When I was in the military, I raised my right hand, I took an oath. I swore to uphold and defend the Constitution of the United States. If you don’t have election integrity, if ballots aren’t held sacred, then our whole system can come crumbling down.”

Michels wants families to have more choice in education and favors taxpayer-supported vouchers. “Competition is what makes our business better. We compete fiercely with our competitors—that’s what makes us a better company. I think if there’s competition in the education system, the same thing will happen. Parents will have a right to choose.”

The company was affected by Biden’s decision to cancel the Keystone Pipeline, he said in a statement. It laid off 700 workers because of it, and Michels blames the Biden administration for rising gas prices.

But Michels doesn’t oppose all government involvement. He addressed the PFAS contamination in the Marinette area by saying, “It needs to get cleaned up.”

As a business executive, Michels said the companies involved should correct the problem. “I’m a businessman myself. We’re a great operator, a responsible operator. I’d like to say we never make mistakes but if we do, we fix them.”

Michels supports government participation to ensure clean water. “Of course, the government’s No. 1 duty is to take care of people. The government needs to get involved and help with the cleanup. It’s on the state level and the federal level. Nothing’s more important than having clean, drinkable water. It’s the foundation of life.”

To avoid a conflict of interest in a state where the governor has to sign off on large infrastructure contracts, Michels said he will divest his stake in the company if elected. Michels Construction received about $660 million in government funds, according to media reports.

“I would divest of any ownership in the company between election day and inauguration day,” he said.

MENOMINEE—Two Menominee County women re-ignited the discussion about the National Register of Historic Places nomination for the Dog’s Belly and 60 Islands area, with one accusing County Commissioner David Prestin of having a conflict of interest because his sits on Alger Delta Cooperative Electric Association’s board.

Both women—Laurie Paitl of Menominee and Tina Lesperance of Lake Township—said supporters of the Back Forty Project, a proposed mine about 10 miles west of the City of Stephenson, turned county commissioners against the historical nomination, which already has won approval in Wisconsin. But others previously have raised concerns about how the designation could affect property owners in the nominated area.

Paitl spoke during the public comment period at last week’s Menominee County Board meeting about how people with financial interests in the Back Forty Project near the historic area influenced commissioners and prompted the tie vote March 8 that killed the resolution to support the designation. One of those in opposition spoke anonymously last month and was dressed in camouflage, which Paitl called “scary.”

“There’s a conflict as well with one of the commissioners, Mr. Dave Prestin,” Paitl said. She called Prestin a former chairman of Alger Delta Cooperative Electric Association and said his involvement with the electric company could have presented a motive for his opposition to the historic designation because Alger Delta is interested in securing a contract with the mine.

But Prestin denied this, saying loudly, “You’re wrong.” Alger Delta doesn’t provide power to the mine, he said. “There is no conflict.”

“My position on Alger Delta in no way has any bearing on the Dog’s Belly historical designation,” said Prestin, a member of Alger Delta’s board. “We don’t even have the service territory.”

The application for the National Register of Historic Places is a separate issue from the Back Forty Mine, Prestin said. “How the mine gets so co-mingled with this historical designation, I really don’t understand where they come into play. Is the ends to hurt the mine, or for the historical designation? I don’t understand how I get drawn into this.”

Reviewing that a 4-4 tie vote killed the county board resolution to support the historic nomination on March 8, Lesperance of Lake Township took another approach to persuading commissioners to reconsider the historic designation.

The motion to provide a letter of support for the nomination was supported by Menominee County Board Chairman Larry Phelps, Vice Chairman William Cech and Commissioners Bernie Lang and Gerald Piche, while Commissioners Nick Hanchek, Larry Johnson, Prestin and Larry Schei opposed it. Commissioner Steven Gromala was absent from the March 8 meeting. While he participated remotely, his wasn’t allowed to vote per state rules. He said he would have supported the motion.

Lesperance offered to organize a tour of the historic area for the commissioners.

“I would hope before anyone cast their opinion of this nomination in stone, you would take a tour out there. Take a tour of the mounds and the gardens,” she said. “This area has sacred burial grounds, ancient garden beds and food caches, and prominent dance rings that are thousands of years old.”

Lesperance’s research into restrictions placed on property with the historic designation turned up none, she said.

Lesperance wants the county commissioners to revisit the nomination and vote to support the National Historic designation. “This would bring historical recognition to this area, and it would acknowledge and strengthen our relationship with the present-day Menominee Indian tribe,” she said.

Gromala agreed the resolution to support the historic designation deserved another try. “I will ask that this letter be brought back up for consideration,” Gromala said.

Lang agreed the county board should revisit the historic designation. “That was voted on by less than a full board. I would like us to reconsider that with another vote,” he said.

Lesperance said information presented at previous county board meetings from those with connections to the Back Forty Project, including Dave Anderson of Gold Resources Inc., the company that owns the project, and board members of Alger Delta Cooperative Electric Association. “This may have persuaded the county board to vote no,” she said.

The award is presented annually in April to community professionals who respond to victims of sexual assault and/or child maltreatment in Northeast Wisconsin. Recipients must demonstrate dedication, leadership, and action to have a positive effect on survivors and their families as they heal and move forward.

The other winner is Green Bay Police Detective John Peters. Falkenberg and Peters were chosen out of 30 nominations.

“I am thrilled to recognize John and Mary as our Excellence in Advocacy Award winners,” said Lois Mischler, president and CEO of Family Services. “Our communities are safer and systems of reporting these crimes are more survivor focused because of their incredible work and the partnerships they provide.”

Falkenberg has more than 30 years of experience assisting victims of sexual assault. She is the only victim/witness coordinator in Marinette County and has worked closely with the Sexual Assault Center of Family Services to make sure that victims get the support they need. Those who nominated Falkenberg describe her as “a force of support,” and “a rich resource who leads with more than just policy and procedure, but with such heart and compassion.”

Colleagues also noted Falkenberg’s continued commitment to her work during a personal health battle with cancer, stating, “even when (Mary) was going through chemo, her dedication to victims still held strong.”

Peters will be honored specifically for his work on Internet Crimes Against Children (ICAC). For nearly 10 years, Peters has dedicated himself to the investigation of child exploitation and child pornography online while also taking the time to educate children, teens and parents about the dangers that exist. Colleagues and community partners noted in their nominations that Peters is “someone who treats each case as if the child was his own.”

They also noted the impact of his work, stating “If not for the arrest of these offenders, they would no doubt continue to seek images of exploited children.”

Both Falkenberg and Peters will be honored during a private reception with fellow nominees, community partners, friends and family members in May. 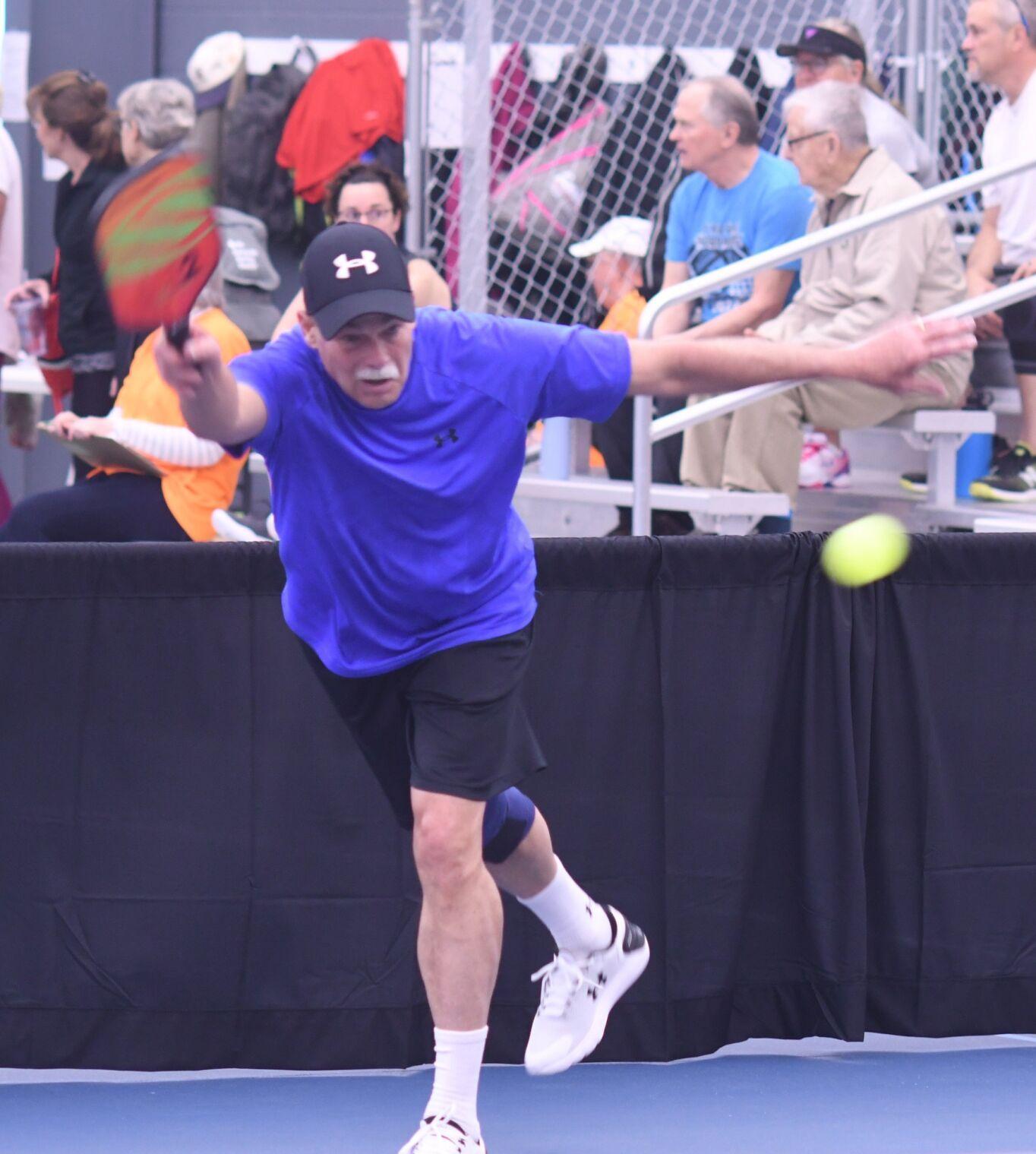 Rick Fila serves in an intermediate mixed doubles match during the Pickle Brawl pickleball tournament on Sunday at the Community REC Center in Marinette. The tournament brought 142 players from Wisconsin, Michigan, Minnesota and Kentucky to the REC Center for the two-day event. See more photos on page B2.