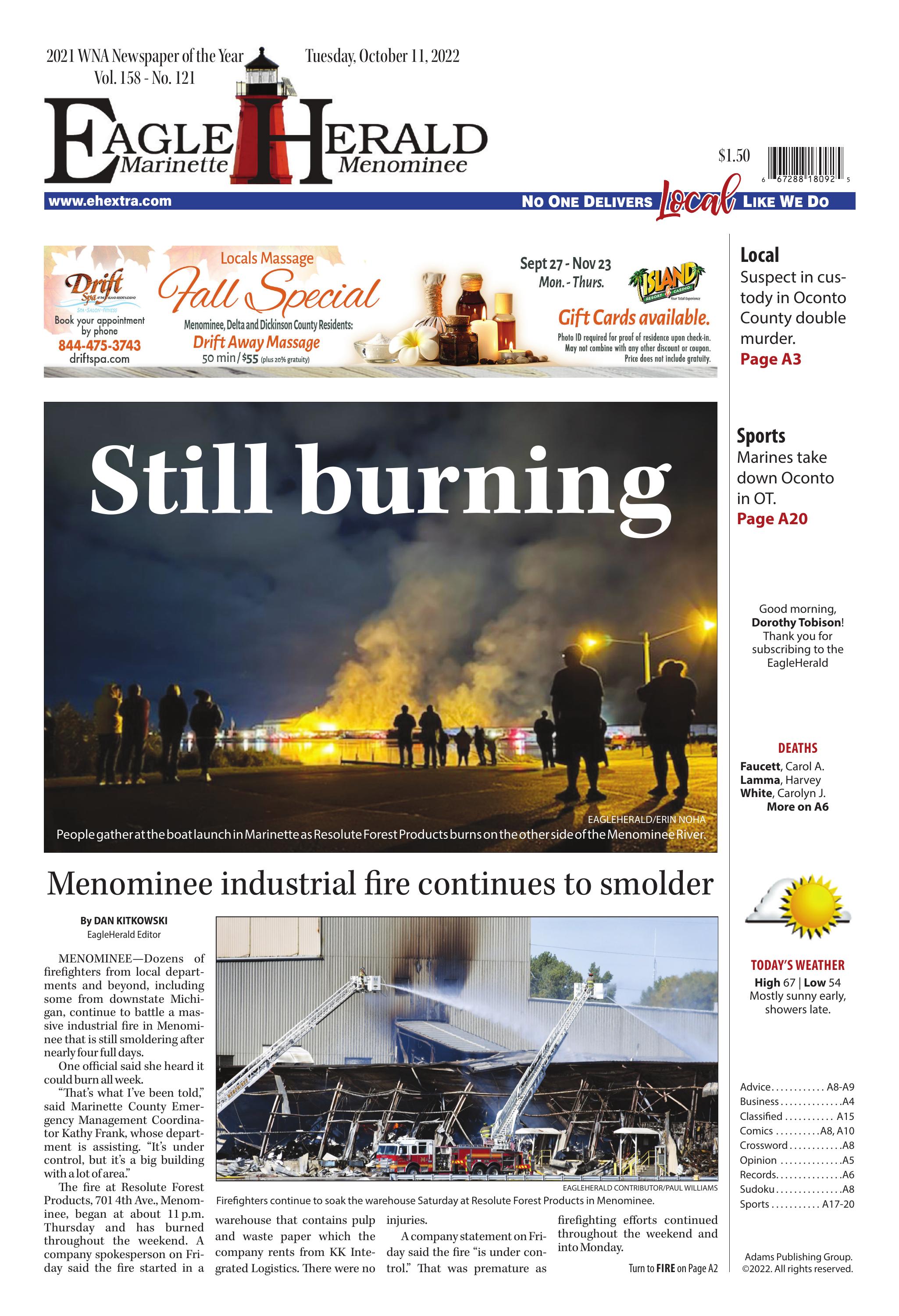 People gather at the boat launch in Marinette as Resolute Forest Products burns on the other side of the Menominee River.

The blue siding torn from a warehouse stands out amid the smoke inside the yard Friday night at Resolute Forest Products in Menominee. Mike Biehl, owner of MJB Industries, was onsite much of the weekend utilizing a backhoe and other equipment to help contain the fire. Other excavating companies assisted as well.

Firefighters continue to soak the warehouse Saturday at Resolute Forest Products in Menominee.

This shot from across the Menominee River shows three pieces of heavy equipment tearing down the warehouse while it is being sprayed by an aerial truck Sunday at Resolute Forest Products in Menominee.

MENOMINEE—Dozens of firefighters from local departments and beyond, including some from downstate Michigan, continue to battle a massive industrial fire in Menominee that is still smoldering after nearly four full days.

One official said she heard it could burn all week.

“That’s what I’ve been told,” said Marinette County Emergency Management Coordinator Kathy Frank, whose department is assisting. “It’s under control, but it’s a big building with a lot of area.”

The fire at Resolute Forest Products, 701 4th Ave., Menominee, began at about 11 p.m. Thursday and has burned throughout the weekend. A company spokesperson on Friday said the fire started in a warehouse that contains pulp and waste paper which the company rents from KK Integrated Logistics. There were no injuries.

A company statement on Friday said the fire “is under control.” That was premature as firefighting efforts continued throughout the weekend and into Monday.

Smoke could be seen billowing from the plant much of the last few days. Bright orange flames also were visible during that time.

Officials from the Environmental Protection Agency (EPA) came in during the weekend. “They’re the ones doing the air and water sampling monitoring,” Frank said, adding that information will be released through the EPA going forward.

The Marinette Fire Department has a mutual aid agreement with Menominee, but in order for other Wisconsin departments to offer help the governors from both Wisconsin and Michigan had to activate the Northern Emergency Management Assistance Compact (NEMAC).

The NEMAC legislation, signed in 2013, allows jurisdictions, to include any or all of the states of Illinois, Indiana, Ohio, Michigan, Minnesota, Montana, New York, North Dakota, Pennsylvania, and Wisconsin, to participate in cross-border mutual assistance for preparedness and response with any or all of the Canadian provinces of Alberta, Manitoba, Ontario and Saskatchewan. The compact allows additional states and provinces to join upon execution or adoption.

Once the NEMAC was activated, crews came from all over Marinette County, Oconto County, Brown County and as far away as Appleton.

“It’s a number of different apparatus and personnel,” he said of the strike team. “We were officially requested through the State of Wisconsin to provide some help.”

Folgert described the fire. “Just a lot of heavy fire in a very large warehouse facility that extended into the pulp mill,” he said. “There was a lot of fire load in that warehouse—filled from floor to ceiling with bailed paper products and other products as well.”

Besides the Marinette and Town of Peshtigo fire departments, other Marinette County departments offering help include the City of Peshtigo, Wausaukee and Grover-Porterfield. Folgert said most of these departments were released Saturday morning.

He said his department was more than willing to help.

“Most of this is being coordinated on the Michigan side,” Folgert said. “We were just a small part of the whole thing. We certainly are glad to help and do what we could. This thing continues to burn and it needs attention.”

Crews also came from throughout the Upper Peninsula, as far away as Marquette. Menominee County 911 reported Monday that units from multiple Lower Michigan fire departments were being deployed.

The Escanaba Township Fire Department, which sent a Tower 5 ladder truck that was steadily flowing 1,200 to 1,800 gallons of water per minute with the help of assisting department’s engines and volume pumps, according to a social media post from that department.

“In getting our Tower we had agreed to go anywhere in the Upper Peninsula we may be needed and this weekend we are fulfilling that promise, because if the tables were turned and we had an incident of this size in our community, these Departments would not hesitate to help us,” the department posted on its Facebook page.

The City of Escanaba Fire Department sent down a total of eight firefighters and two trucks between Friday and Sunday. One of the trucks was a pumper and the other was a portable air filling station that allows air bottles to be filled on scene.

“That truck is pretty unique,” Escanaba Fire Chief Robert LaMarche said of the portable air filling station. “Most of the time when you have to fill air bottles you have to run them back to a department to fill them.”

He said the portable unit on the truck can be taken anywhere. “That’s really nice, especially in rural areas, so you don’t have to drive 30 miles back to the fire department. We can just fill the air bottles right on scene.”

LaMarche said the Menominee Fire Department sent out a request for assistance on Friday. Once such a request comes in, there is no hesitation to respond, he said. “We gather all the resources that we can and then we will send them (firefighters),” he said.

The Escanaba chief was on site Friday and he said it was a massive fire. “By far the largest fire I have ever seen and the hardest to control,” LaMarche said.

He said the extreme fire load in the warehouse is what made the fire difficult to contain.

Shelter in place orders were issued at various times throughout the weekend for portions of both Marinette and Menominee, depending on the wind direction. There were no active orders as of late Monday afternoon.

On Monday afternoon, Marinette County Emergency Management provided this update: “The industrial fire in the City of Menominee is expected to burn for several days. As wind direction changes city residents may smell smoke and possibly see soot on outdoor surfaces. The EPA is on-site and conducting air monitoring. Currently they are not finding any chemical levels above health based screening levels.”

Numerous businesses and agencies have been providing food and drink to the firefighters throughout the battle.

“Kudos to everybody and a lot more willing to help,” Folgert said.

According to its website, Montreal-based Resolute Forest Products is a global leader in the forest products industry with a diverse range of products, including market pulp, tissue, wood products and papers, which are marketed in over 60 countries. The company owns or operates some 40 facilities, as well as power generation assets, in the United States and Canada. The Menominee plant has 98 employees and the plant manager is Todd Clausen, according to its website.