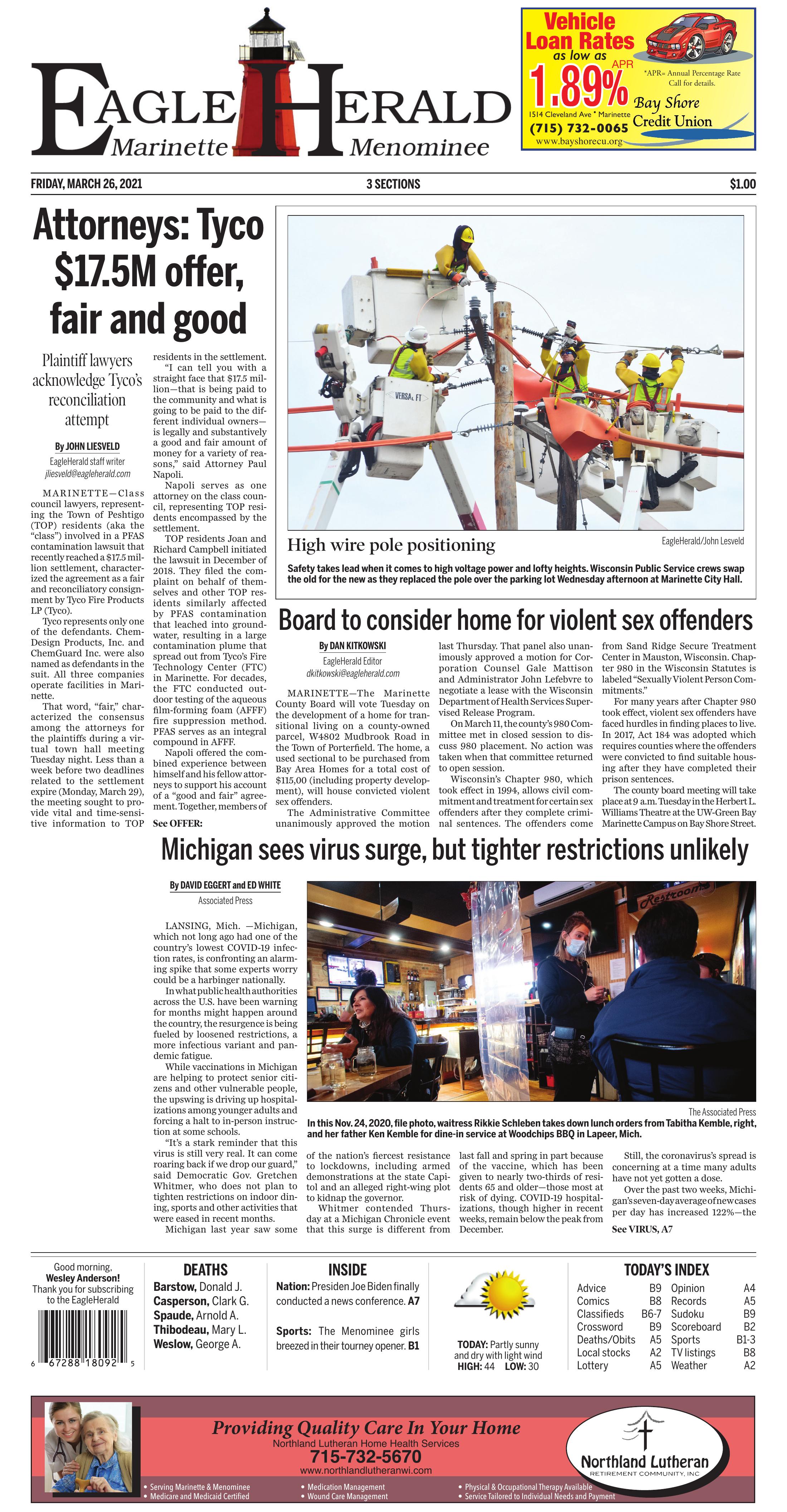 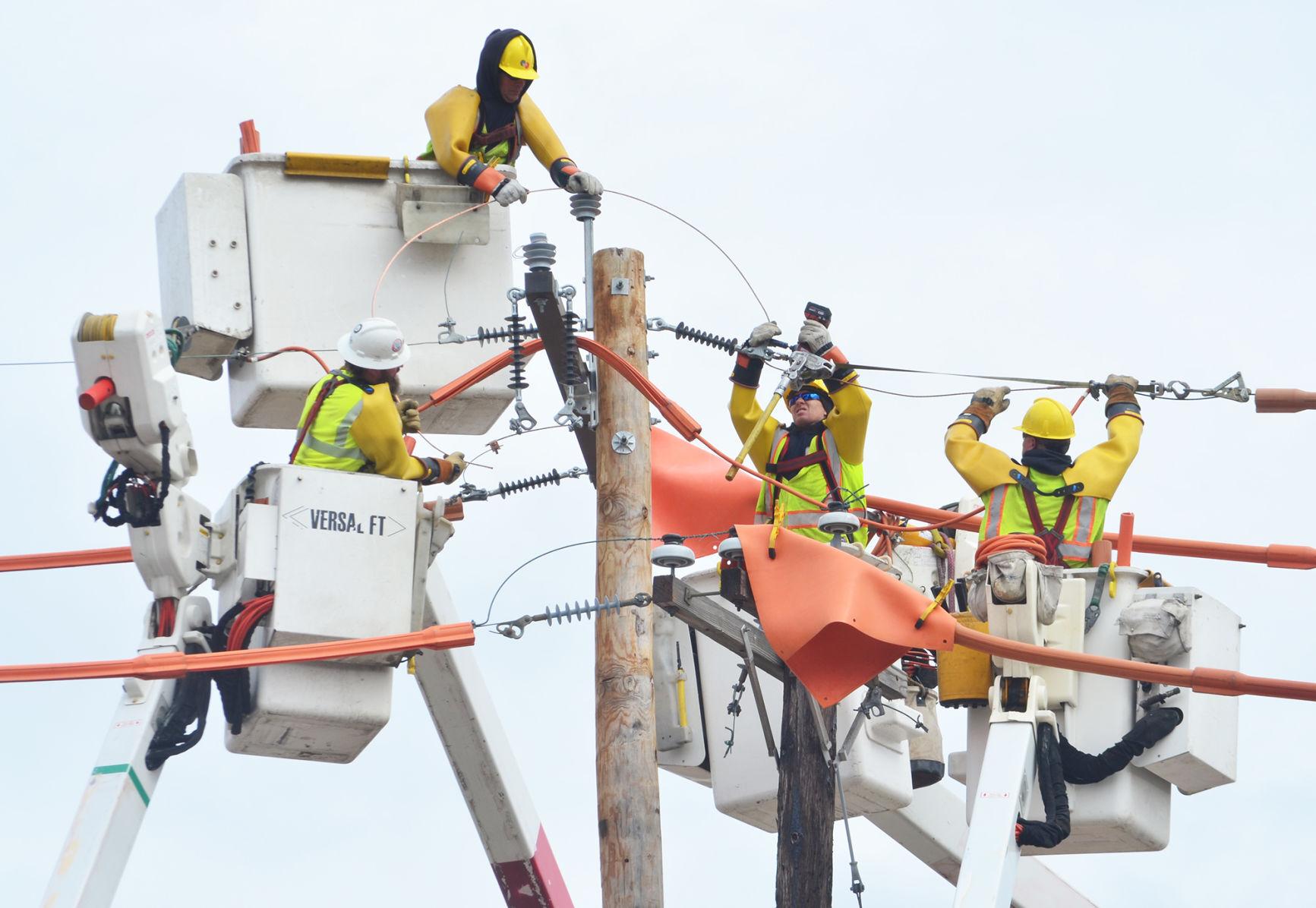 Safety takes lead when it comes to high voltage power and lofty heights. Wisconsin Public Service crews swap the old for the new as they replaced the pole over the parking lot Wednesday afternoon at Marinette City Hall.

MARINETTE—The Marinette County Board will vote Tuesday on the development of a home for transitional living on a county-owned parcel, W4802 Mudbrook Road in the Town of Porterfield. The home, a used sectional to be purchased from Bay Area Homes for a total cost of $115,00 (including property development), will house convicted violent sex offenders.

On March 11, the county’s 980 Committee met in closed session to discuss 980 placement. No action was taken when that committee returned to open session.

For many years after Chapter 980 took effect, violent sex offenders have faced hurdles in finding places to live. In 2017, Act 184 was adopted which requires counties where the offenders were convicted to find suitable housing after they have completed their prison sentences.

The county board meeting will take place at 9 a.m. Tuesday in the Herbert L. Williams Theatre at the UW-Green Bay Marinette Campus on Bay Shore Street.

MARINETTE—Class council lawyers, representing the Town of Peshtigo (TOP) residents (aka the “class”) involved in a PFAS contamination lawsuit that recently reached a $17.5 million settlement, characterized the agreement as a fair and reconciliatory consignment by Tyco Fire Products LP (Tyco).

Tyco represents only one of the defendants. ChemDesign Products, Inc. and ChemGuard Inc. were also named as defendants in the suit. All three companies operate facilities in Marinette.

That word, “fair,” characterized the consensus among the attorneys for the plaintiffs during a virtual town hall meeting Tuesday night. Less than a week before two deadlines related to the settlement expire (Monday, March 29), the meeting sought to provide vital and time-sensitive information to TOP residents in the settlement.

“I can tell you with a straight face that $17.5 million—that is being paid to the community and what is going to be paid to the different individual owners—is legally and substantively a good and fair amount of money for a variety of reasons,” said Attorney Paul Napoli.

Napoli serves as one attorney on the class council, representing TOP residents encompassed by the settlement.

TOP residents Joan and Richard Campbell initiated the lawsuit in December of 2018. They filed the complaint on behalf of themselves and other TOP residents similarly affected by PFAS contamination that leached into groundwater, resulting in a large contamination plume that spread out from Tyco’s Fire Technology Center (FTC) in Marinette. For decades, the FTC conducted outdoor testing of the aqueous film-forming foam (AFFF) fire suppression method. PFAS serves as an integral compound in AFFF.

Napoli offered the combined experience between himself and his fellow attorneys to support his account of a “good and fair” agreement. Together, members of the class counsel carry much experience representing individuals and communities throughout the nation in similar cases toxic exposure cases, including PFAS. Further examples of that collective experience comprise litigation involving the national opioid crisis as well as acting representation for the first responders who suffered various cancers and respiratory injuries following 9/11.

“These are all top-class people that really know what they are doing,” Napoli said. “These guys are the best of the best … who have dedicated their lives to helping people and are hoping to help the community in the (TOP).”

The 2019 film “Dark Waters,” starring Mark Ruffalo (as Bilott), dramatized the real-life story of Bilott’s investigation and lawsuit filed on behalf of a West Virginia farmer against E.I. DuPont de Nemours & Co. after one of its factories discharged an “essentially unregulated” and “confirmed animal carcinogen” known as ammonium perfluorooctanoate. Today that chemical is grouped into the much larger family of per- and polyfluoroalkyl substances (PFAS), which serves as the driving force behind the current TOP settlement. Scientific evidence identifies probable links between PFAS and various human health issues, including some cancers.

During the meeting, Bilott compared the slow and cumbersome journey through the legal system that similar case litigations have encountered.

“This is really an extraordinary settlement that is being proposed,” he said. “This is the first case in the country where you have companies that are willing to come forward now, and to pay now, for damage to property from PFAS chemicals or exposure for medical monitoring type damages (from PFAS).”

With 23 years of practice, providing litigation for some of the first PFAS cases in the country, Bilott provided insight into the difficulties of developing such cases for actual courtroom proceedings.

“The amount of effort and expense that it takes to move these cases through the litigation system is phenomenal,” he said.

He further explained that the complexity of proving these types of chemical exposures, in addition to the costs and the incredibly complicated science involved, can lead to years of legal proceedings. For instance, the West Virginia class-action lawsuit against DuPont, portrayed in “Dark Waters,” stretched out for more than a decade.

“That … lawsuit was filed in 2001,” he pointed out. “The first trial for any of those (plaintiffs) to be able to actually go into court and try to recover damages was 2015.”

Moreover, those initial court trials lasted weeks, followed by appeals that significantly compounded both the timeline and the expenses. Additionally, Bilott underscored that the government’s regulatory status of PFAS continues to remain “up in the air and changes daily.”

More specifically, following the initial 2018 filing of the TOP lawsuit in the State of Wisconsin Circuit Court, Marinette County, the case eventually worked its way up to the U.S. District Court for the District of South Carolina (USDCSC). It was subsequently incorporated into a multi-district litigation (MDL No. 2873). According to information available on the USDCSC, MDL 2873 includes over 500 other cases related to PFAS contaminations resulting from AFFF use.

As one of the lead lawyers involved in MDL 2873, Napoli explained that each one of those 500 plus cases moves slowly through the legal system to eventual trial and/or settlement. And cases similar to the issues in the TOP, which involve property owners and communities with private wells, have not yet percolated to the top. Napoli said it may be two or three years before that occurs.

“(The case) has been going on in your community for quite some time,” he said. “And not a lot of progress has been made … And this (settlement) is, really, the first real progress.”

As part of an effort to provide information to individuals affected by the settlement, Tuesday’s meeting concentrated on information about the TOP residents within the defined “Class Area.”

The Class Area represents a large swath of land that lies within specific boundaries inside the TOP. Any resident who resided or owned property in that area, and who also owned a private drinking water well for at least one year between Jan. 1, 1965 and Dec. 31, 2020, would be included in the settlement (as reported in the March 12 EagleHerald edition).

According to the class counsel team, a settlement “notice campaign” focused on the dissemination of settlement information to those residents affected.

The website continues to operate and contains pages and links with valuable information and forms for those seeking to file a claim or read settlement court documents. Additionally, the campaign also utilized social media, digital display advertising, radio and newspapers. More recently, notices of the settlement reached 675 individuals via postal mail.

“(The notice campaign) has been highly effective,” Garretson said, adding that the number of online views the various media content received reached upwards of 700,000 times.

However, he clarified that those 700,000 views likely consists of multiple people viewing the content multiple times.

“We estimate that 71,000 unique individuals have actually been reached by that digital campaign,” he said.

Tuesday’s meeting follows two earlier meetings in the weeks just prior. Concerned residents organized those meetings to provide TOP residents settlement information after they felt the information was not reaching all members of the Class Area (see EagleHerald March 12 edition).

“This (settlement) is something we hope folks will realize is a great benefit,” Bilott said. “But … you have a choice. Nobody is being forced to take this one way or the other.”

Napoli agreed but encouraged people not to opt-out and to file a claim.

“I would implore you to be involved,” Napoli said. “I think this is a really good deal; one that is not going to be seen for years to come … I truly believe (that) in negotiating this case with Tyco, they had the sense to try to have some measure of … reconciliation with the community”