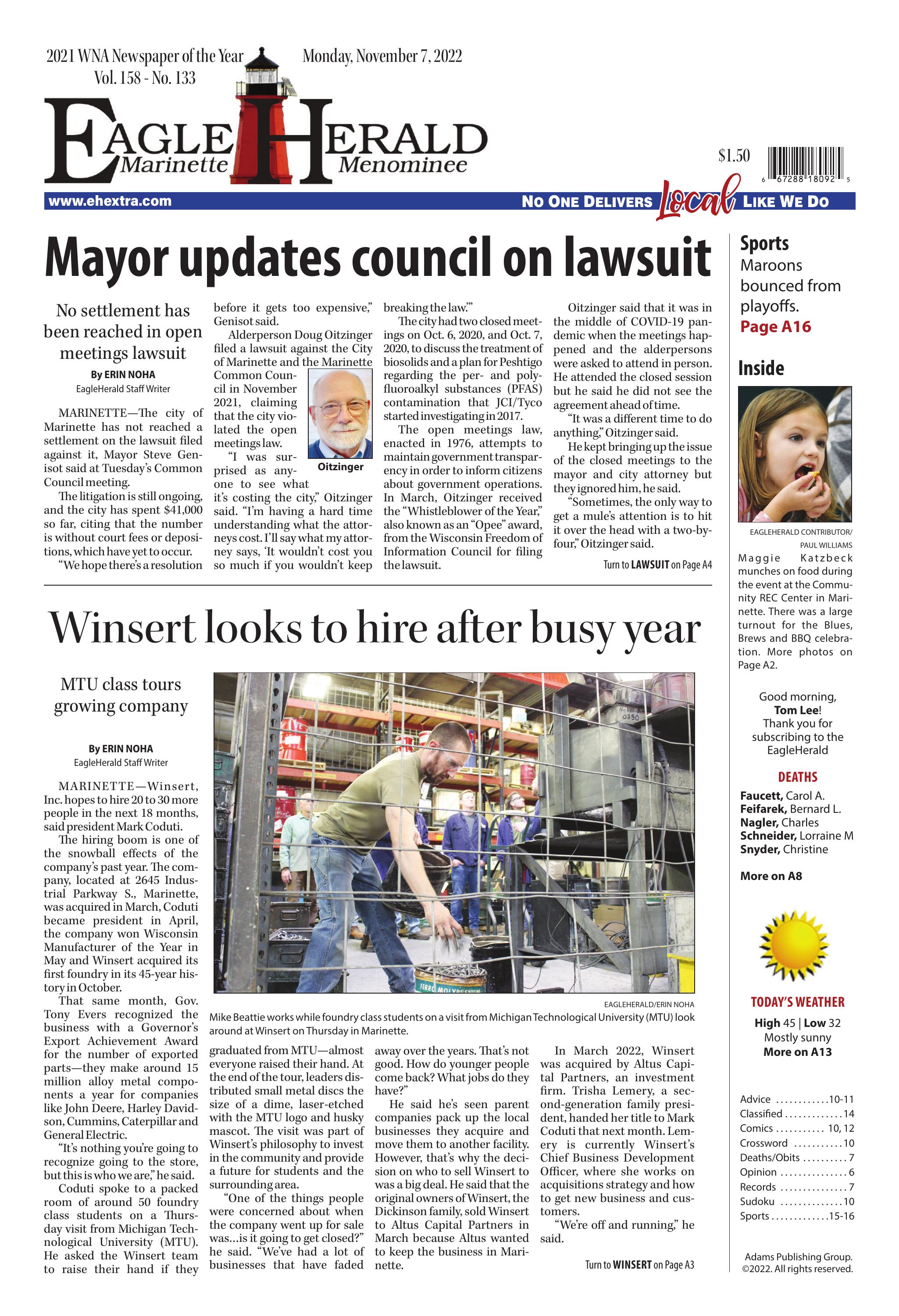 MARINETTE—The city of Marinette has not reached a settlement on the lawsuit filed against it, Mayor Steve Genisot said at Tuesday’s Common Council meeting.

The litigation is still ongoing, and the city has spent $41,000 so far, citing that the number is without court fees or depositions, which have yet to occur.

“We hope there’s a resolution before it gets too expensive,” Genisot said.

Alderperson Doug Oitzinger filed a lawsuit against the City of Marinette and the Marinette Common Council in November 2021, claiming that the city violated the open meetings law.

“I was surprised as anyone to see what it’s costing the city,” Oitzinger said. “I’m having a hard time understanding what the attorneys cost. I’ll say what my attorney says, ‘It wouldn’t cost you so much if you wouldn’t keep breaking the law.’”

The city had two closed meetings on Oct. 6, 2020, and Oct. 7, 2020, to discuss the treatment of biosolids and a plan for Peshtigo regarding the per- and polyfluoroalkyl substances (PFAS) contamination that JCI/Tyco started investigating in 2017.

The open meetings law, enacted in 1976, attempts to maintain government transparency in order to inform citizens about government operations. In March, Oitzinger received the “Whistleblower of the Year,” also known as an “Opee” award, from the Wisconsin Freedom of Information Council for filing the lawsuit.

Oitzinger said that it was in the middle of COVID-19 pandemic when the meetings happened and the alderpersons were asked to attend in person. He attended the closed session but he said he did not see the agreement ahead of time.

“It was a different time to do anything,” Oitzinger said.

He kept bringing up the issue of the closed meetings to the mayor and city attorney but they ignored him, he said.

“Sometimes, the only way to get a mule’s attention is to hit it over the head with a two-by-four,” Oitzinger said.

During the first closed meeting, the council discussed whether or not to accept an agreement put forth by JCI/Tyco. The agreement proposed that, in exchange for release of future claims, JCI/Tyco would give the city $1.3 million to be used for the city’s purchase of biosolids processing equipment. The equipment would then be used to dry biosolids contaminated with PFAS, primarily originating from the historic release of fire-fighting foams into the environment from Tyco Fire Products. Biosolids are a product of the wastewater treatment process.

The other closed meeting, held Oct. 7, 2020, concerned water supply options for the Town of Peshtigo, two of which involved the City of Marinette.

The city began working with the engineering firm Ruekert-Mielke in April 2020 to assess the impacts of potentially providing water to residents in the Town of Peshtigo impacted by PFAS contamination. Regarding annexation, Genisot said they’re not taking any action.

“At this point, we’re not going to,” he said. “The town has actually moved in a different direction.”

The council hasn’t voted on or finalized anything at this point, Genisot said. The settlement will be up to the attorney representing the city, Robert Lauer from Milwaukee-based Kasdorf, Lewis & Swietlik S.C., to present to the council and whether the other party, Oitzinger, will accept it.

Oitzinger’s attorney is Wisconsin Transparency Project president and founder Thomas Kamenick of Port Washington, Wis. who specializes in open meetings law. It is unlikely that there will be a trial, Kamenick told the EagleHerald. Rather, the outcome of the lawsuit will likely be based on briefs (written arguments) from the plaintiff and defendants.

If the lawsuit is successful, it is hard to say exactly how it would impact the actions taken during these closed meetings and that this would be largely up to the judge, Kamenick told the EagleHerald. 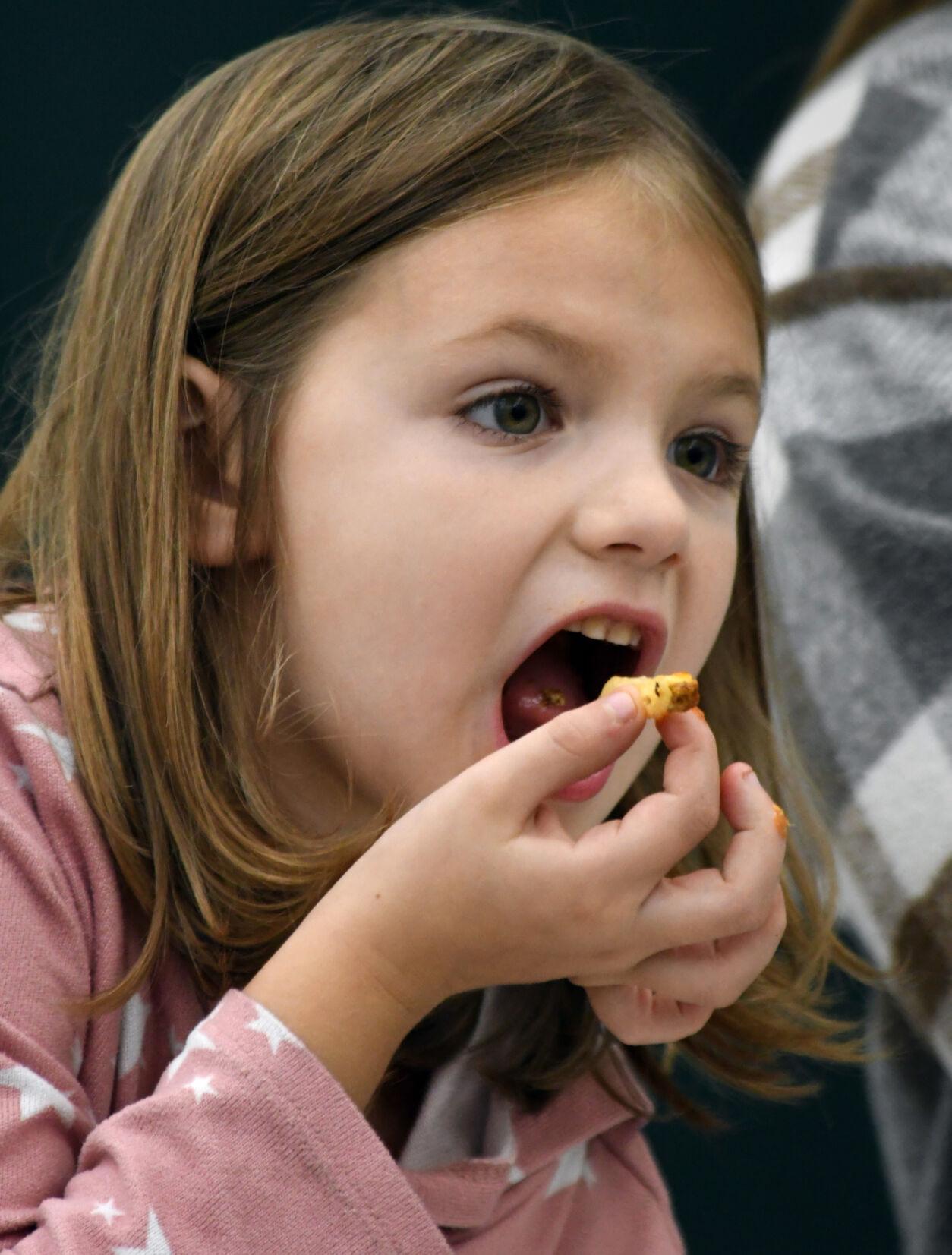 Maggie Katzbeck munches on food during the event at the Community REC Center in Marinette. There was a large turnout for the Blues, Brews and BBQ celebration. More photos on Page A2.

Mike Beattie works while foundry class students on a visit from Michigan Technological University (MTU) look around at Winsert on Thursday in Marinette.

MARINETTE—Winsert, Inc. hopes to hire 20 to 30 more people in the next 18 months, said president Mark Coduti.

The hiring boom is one of the snowball effects of the company’s past year. The company, located at 2645 Industrial Parkway S., Marinette, was acquired in March, Coduti became president in April, the company won Wisconsin Manufacturer of the Year in May and Winsert acquired its first foundry in its 45-year history in October.

“It’s nothing you’re going to recognize going to the store, but this is who we are,” he said.

Coduti spoke to a packed room of around 50 foundry class students on a Thursday visit from Michigan Technological University (MTU). He asked the Winsert team to raise their hand if they graduated from MTU—almost everyone raised their hand. At the end of the tour, leaders distributed small metal discs the size of a dime, laser-etched with the MTU logo and husky mascot. The visit was part of Winsert’s philosophy to invest in the community and provide a future for students and the surrounding area.

“One of the things people were concerned about when the company went up for sale was…is it going to get closed?” he said. “We’ve had a lot of businesses that have faded away over the years. That’s not good. How do younger people come back? What jobs do they have?”

He said he’s seen parent companies pack up the local businesses they acquire and move them to another facility. However, that’s why the decision on who to sell Winsert to was a big deal. He said that the original owners of Winsert, the Dickinson family, sold Winsert to Altus Capital Partners in March because Altus wanted to keep the business in Marinette.

In March 2022, Winsert was acquired by Altus Capital Partners, an investment firm. Trisha Lemery, a second-generation family president, handed her title to Mark Coduti that next month. Lemery is currently Winsert’s Chief Business Development Officer, where she works on acquisitions strategy and how to get new business and customers.

On top of the fact that the company both develops patented alloys and manufactures products, a rare combo, Winsert started working on another differentiator after the transition—its ability to monitor and report on machines in real-time.

The operational and organizational improvements are improving overall business performance, he said. He pulls a water bottle from the shelf that reads OneWinsert—the internal company mantra. The company has improved its trust and transparency, he said, admitting that the awards they’ve recently received have also come with the admittance that, in the past, they may have gotten too complacent and not changed with the industry. They’re adapting to a new normal.

“It continues to snowball. The better we get, the more competitive we are, the more our brand gets out there, the more people are aware and want to do things with us.”

The side effect is also more accountability. In the past two years, he said they’ve communicated to the company as much as they had in the past 10.

While they couldn’t disclose who they were acquiring, Coduti said they shared the acquisition news with the entire company as the developments happened to keep the employees in the loop—and ultimately keep them at Winsert.

The acquisition of Alloy Cast Products, Inc. in New Jersey is exciting because they can bring investment casting into their repertoire. Previously, they had only done shell sand casting, he said.

“We’re here to grow this business.”