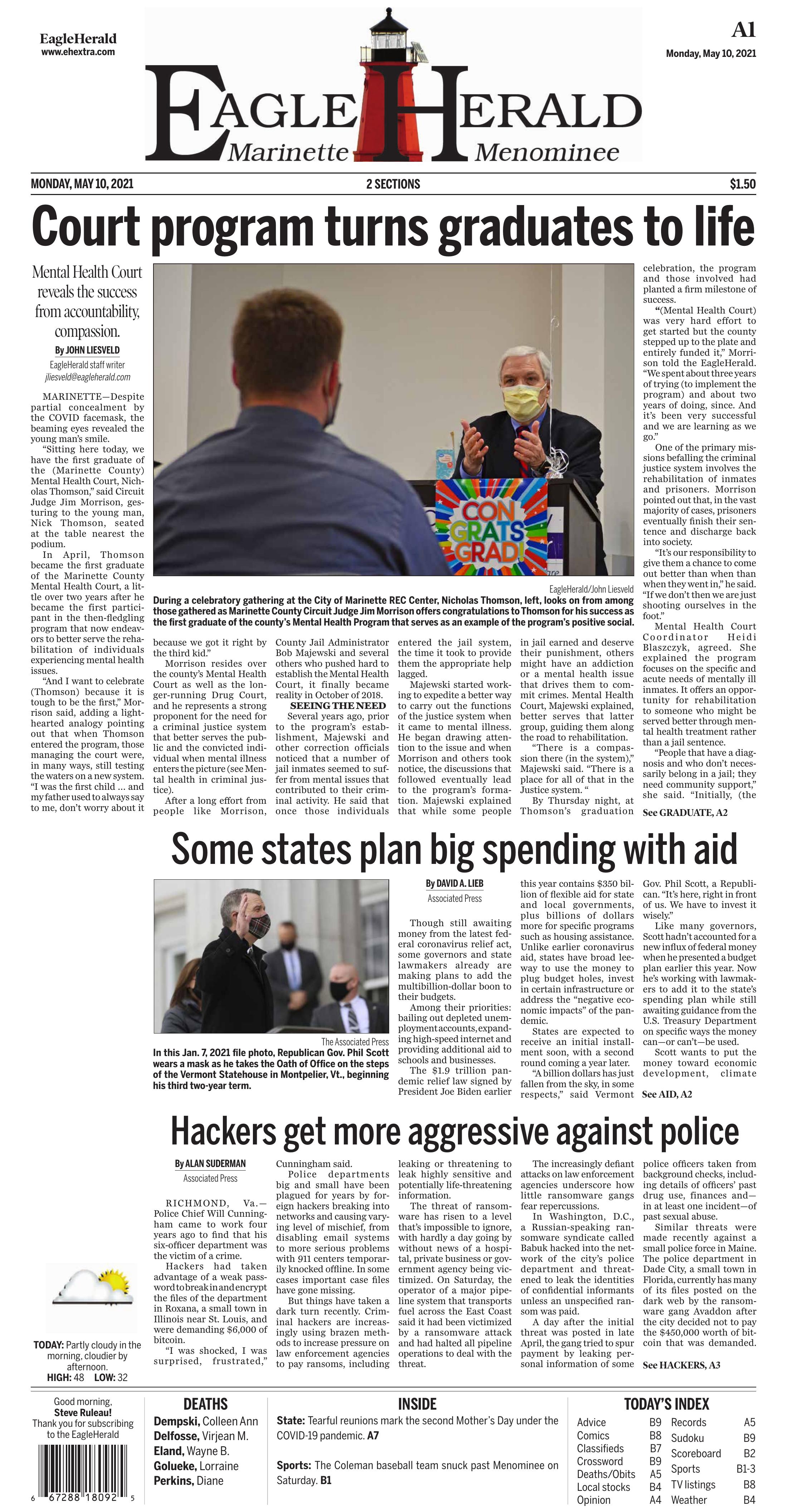 During a celebratory gathering at the City of Marinette REC Center, Nicholas Thomson, left, looks on from among those gathered as Marinette County Circuit Judge Jim Morrison offers congratulations to Thomson for his success as the first graduate of the county’s Mental Health Program that serves as an example of the program’s positive social.

The first graduate of the Marinette County’s Mental Health Court, Nicholas Thomson, shines with a positive outlook on his future as he celebrates his successful progression through the program with girlfriend Lily Hecht, at the City of Marinette REC Center.

Nicholas Thomson, center, enjoys a few of the tasty perks during a Thursday gathering of family, friends and Marinette County criminal justice officials. The party recognized and honored Thomson's recent success as the first graduate of the Marinette County Health Court. Thomson is flanked by his girlfriend Lily Hecht, left, and current program participant Thomas Borchert. Borchert is slated to graduate from the program this summer.

In April, Thomson became the first graduate of the Marinette County Mental Health Court, a little over two years after he became the first participant in the then-fledgling program that now endeavors to better serve the rehabilitation of individuals experiencing mental health issues.

“And I want to celebrate (Thomson) because it is tough to be the first,” Morrison said, adding a lighthearted analogy pointing out that when Thomson entered the program, those managing the court were, in many ways, still testing the waters on a new system. “I was the first child … and my father used to always say to me, don’t worry about it because we got it right by the third kid.”

Morrison resides over the county’s Mental Health Court as well as the longer-running Drug Court, and he represents a strong proponent for the need for a criminal justice system that better serves the public and the convicted individual when mental illness enters the picture (see Mental health in criminal justice).

After a long effort from people like Morrison, County Jail Administrator Bob Majewski and several others who pushed hard to establish the Mental Health Court, it finally became reality in October of 2018.

Several years ago, prior to the program’s establishment, Majewski and other correction officials noticed that a number of jail inmates seemed to suffer from mental issues that contributed to their criminal activity. He said that once those individuals entered the jail system, the time it took to provide them the appropriate help lagged.

Majewski started working to expedite a better way to carry out the functions of the justice system when it came to mental illness. He began drawing attention to the issue and when Morrison and others took notice, the discussions that followed eventually lead to the program’s formation. Majewski explained that while some people in jail earned and deserve their punishment, others might have an addiction or a mental health issue that drives them to commit crimes. Mental Health Court, Majewski explained, better serves that latter group, guiding them along the road to rehabilitation.

“There is a compassion there (in the system),” Majewski said. “There is a place for all of that in the Justice system. “

By Thursday night, at Thomson’s graduation celebration, the program and those involved had planted a firm milestone of success.

“(Mental Health Court) was very hard effort to get started but the county stepped up to the plate and entirely funded it,” Morrison told the EagleHerald. “We spent about three years of trying (to implement the program) and about two years of doing, since. And it’s been very successful and we are learning as we go.”

One of the primary missions befalling the criminal justice system involves the rehabilitation of inmates and prisoners. Morrison pointed out that, in the vast majority of cases, prisoners eventually finish their sentence and discharge back into society.

“It’s our responsibility to give them a chance to come out better than when than when they went in,” he said. “If we don’t then we are just shooting ourselves in the foot.”

Mental Health Court Coordinator Heidi Blaszczyk, agreed. She explained the program focuses on the specific and acute needs of mentally ill inmates. It offers an opportunity for rehabilitation to someone who might be served better through mental health treatment rather than a jail sentence.

“People that have a diagnosis and who don’t necessarily belong in a jail; they need community support,” she said. “Initially, (the program) can be extremely difficult, but once the person learns to rely on its services and supports and they see the successes in their life and their life begins to change, then they are fully on board. It’s like a train, they just keep going and they accomplish their goals and they crush it.”

A TEAM DEDICATED TO REHABILITATION

In addition, to support, accountability plays a big part in the program. That accountability comes from a group of multi-disciplinary professionals who serve on the Mental Health Court board. They oversee the progress of participants through the program as well as the acquisition of new participants who might benefit. The board includes individuals working in sectors of law enforcement, the public defenders and district attorney’s (DA) offices, the Department of Health and Human Services, the Department of Corrections, local volunteers and mental health professionals. Those people play a vital role in the process of referrals that help identify candidates for Mental Health Court.

Wisconsin State Public Defender Brad Hansen explained that when he feels one of his clients might suffer from underlying mental health issues and might be an appropriate candidate for the program, he starts the referral process. He discusses the options with his client, the DA, and others on the Mental Health Court board. Together they determine if the client represents a good fit for the program.

“I am not a psychiatrist, I can’t pretend to have that knowledge,” Hansen said. “But I think, (by) just getting to meet someone you can start to see if there is something that might be appropriate here,(and if there) is there some role that we can fill as a mental health court.”

And like County Jail Administrator Majewski, Hansen also feels that Mental Health Court allows for the introduction of more compassion into the criminal justice system.

“I think what is really beneficial about programs and courts like this is that they are not just an adversarial system where it is me trying stick up for a client,” Hansen said. “It is having other people involved, district attorneys, judges …. We approach this as a team because we need to. And that is the way we get to the root of some of the problems.”

LATE FOR THE PARTY, A GOOD THING

After arriving slightly late to his own party, Thomson admitted to the EagleHerald that success did not come easy, but then again, good things often pose big challenges.

“I’m not going to lie, it was a pretty bumpy road,” Thomson said. “But as I went through the program and learned to accept, then it became easier and easier … ‘Trust the process.’ That’s what Judge Morrison always said … That’s what I did and it ended up good.”

In fact, Thomson’s tardiness to the party ties in well to the “good.”

He was coming from his new job at R&R services II LLC in Sobieski. In addition to finding work since completing the program, Thomson also enrolled in welding classes at Northeast Wisconsin Technical College.

Judge Morrison noted Thomson’s late with a point of significance on the program’s success. He reiterated that while a “bumpy road” awaits any individual who participates in Mental Health Court, the success that it can lead to reflects well on both the participant and the various professionals who work hard to facilitate the continued progress of the program.

“It is not easy,” Morrison underscored. “And I think that is an important point. It is a hard process. And it is highly accountable. So it takes a lot of time and a lot of effort. But when you see an individual come back (to society) and one who is late for his own party because he is coming from his (new) job … My God, if you want to define success: that is success.”

Thomson’s two-year journey in the program was measured not in distance or time, but in moments of accountability tempered by the compassion and support from a wide range of people.

Thursday night’s happy gathering of family, friends and members of the program’s board not only represented the culmination of that success but also the enduring support and work that Thomson strives to continue.

“We set participants up with continued support moving forward,” Blaszczyk said. “They are encouraged to keep up with counseling and the community support programs that they are in. It makes me feel amazing and proud at how well they do.”

In August two more individuals are scheduled to graduate followed closely in July by another.

“It’s proof that the efforts and the program work,” she added

And for Thomson, it’s proof that brighter horizons await.

“It’s been a long time coming,” he said. “It’s definitely exciting to move forward with my life and to be a contributing member of society.”