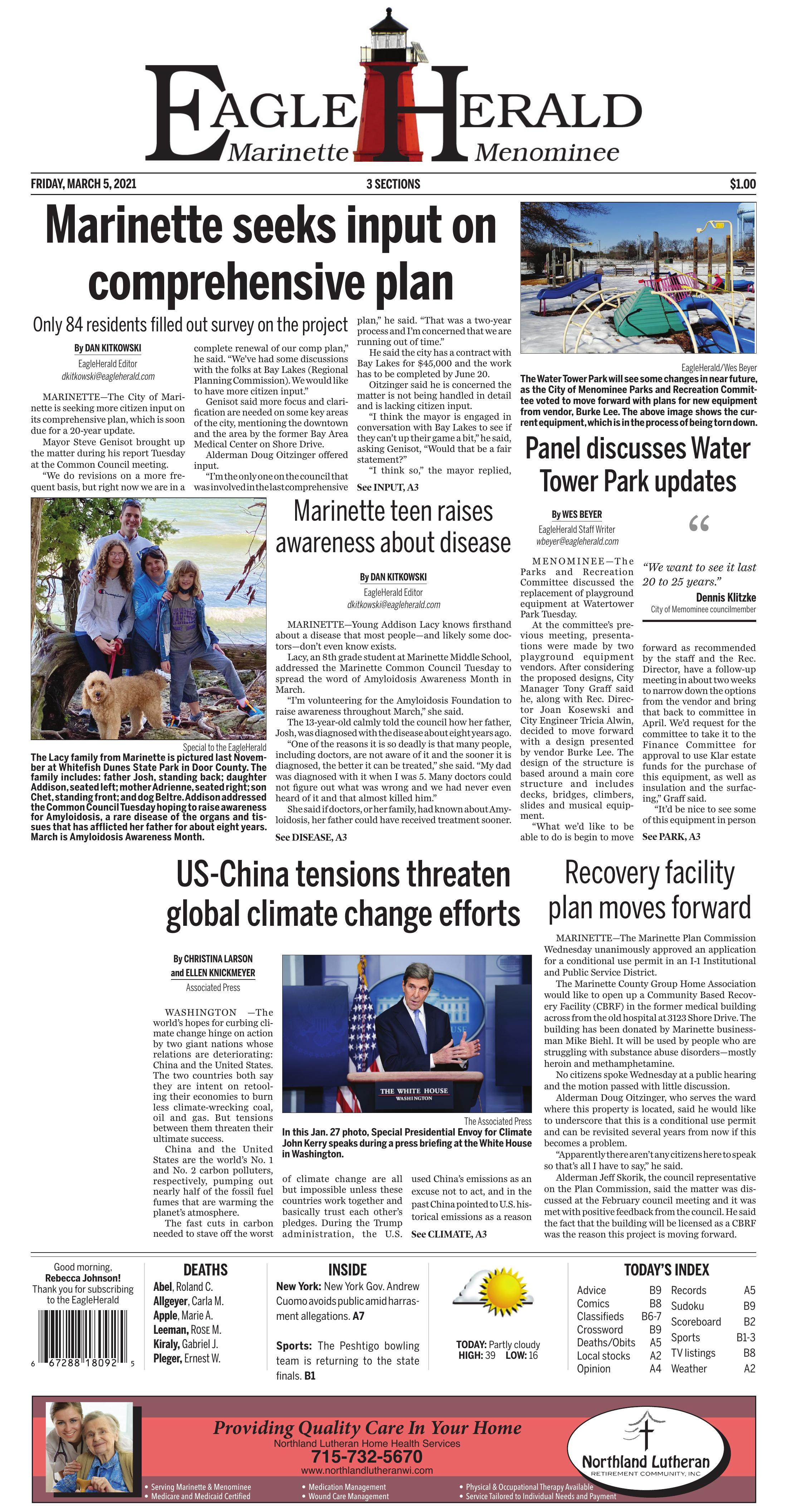 MARINETTE—The City of Marinette is seeking more citizen input on its comprehensive plan, which is soon due for a 20-year update.

Mayor Steve Genisot brought up the matter during his report Tuesday at the Common Council meeting.

“We do revisions on a more frequent basis, but right now we are in a complete renewal of our comp plan,” he said. “We’ve had some discussions with the folks at Bay Lakes (Regional Planning Commission). We would like to have more citizen input.”

Genisot said more focus and clarification are needed on some key areas of the city, mentioning the downtown and the area by the former Bay Area Medical Center on Shore Drive.

“I’m the only one on the council that was involved in the last comprehensive plan,” he said. “That was a two-year process and I’m concerned that we are running out of time.”

Oitzinger said he is concerned the matter is not being handled in detail and is lacking citizen input.

“I think the mayor is engaged in conversation with Bay Lakes to see if they can’t up their game a bit,” he said, asking Genisot, “Would that be a fair statement?”

“I think so,” the mayor replied, adding that less in-person meetings because of the COVID-19 pandemic have made for a challenge.

Alderman Jeff Skorik, a member of the Planning Commission, said that group has reviewed the work done by Bay Lakes so far and he would encourage people to voice their opinions.

He said there was a survey available for residents, but he’s not sure the results were representative of the entire city.

“I think it’s really important to get a broad spectrum of people’s opinions,” he said, pointing out that there were some specific areas of concern identified.

“I’m concerned that when you have a limited number of people (giving) input, that it can sometimes over emphasize areas that may not be generally meaningful for the rest of the community,” Skorik said. “I would just echo that I think it’s important that we get as many people to give input so that we can come up with a plan that will work for everyone.”

Oitzinger said that 84 people filled out the most recent survey, while 648 people completed the survey 20 years ago.

“We hired professionals to do this,” Genisot said. “We will call on them to do this, dig a little deeper.”

“This is a huge accomplishment for the REC Center and it really shows what we are capable of doing there as well,” Ebsch of the outdoor event.

MARINETTE—Young Addison Lacy knows firsthand about a disease that most people—and likely some doctors—don’t even know exists.

“I’m volunteering for the Amyloidosis Foundation to raise awareness throughout March,” she said.

The 13-year-old calmly told the council how her father, Josh, was diagnosed with the disease about eight years ago.

“One of the reasons it is so deadly is that many people, including doctors, are not aware of it and the sooner it is diagnosed, the better it can be treated,” she said. “My dad was diagnosed with it when I was 5. Many doctors could not figure out what was wrong and we had never even heard of it and that almost killed him.”

She said if doctors, or her family, had known about Amyloidosis, her father could have received treatment sooner.

“Awareness is extremely important,” she emphasized.

Addison’s parents, Josh and Adrienne, the city’s assistant recreation director, were in the council chambers to watch their daughter’s presentation.

She described the disease as “cancer like” and said it occurs when there is a buildup of protein in bone marrow that may spread to organs leading to organ failure.

The disease was first described more than 200 years ago, according to the Amyloidosis Foundation. While the disease generally affects middle-aged people and older, it can be seen in individuals in their 30s—as was the case with Addison’s father.

“It is extremely deadly and does not have a lot in the way of treatment,” Lacy said. “… even reaching a few people can make a huge difference.”

People can find more information about the disease at the Amyloidosis Foundation Facebook page or at www.amyloidosis.org. The foundation is based in Clarkston, Michigan, and the phone number is 248-922-9610.

MARINETTE—The Marinette Plan Commission Wednesday unanimously approved an application for a conditional use permit in an I-1 Institutional and Public Service District.

The Marinette County Group Home Association would like to open up a Community Based Recovery Facility (CBRF) in the former medical building across from the old hospital at 3123 Shore Drive. The building has been donated by Marinette businessman Mike Biehl. It will be used by people who are struggling with substance abuse disorders—mostly heroin and methamphetamine.

No citizens spoke Wednesday at a public hearing and the motion passed with little discussion.

Alderman Doug Oitzinger, who serves the ward where this property is located, said he would like to underscore that this is a conditional use permit and can be revisited several years from now if this becomes a problem.

“Apparently there aren’t any citizens here to speak so that’s all I have to say,” he said.

Alderman Jeff Skorik, the council representative on the Plan Commission, said the matter was discussed at the February council meeting and it was met with positive feedback from the council. He said the fact that the building will be licensed as a CBRF was the reason this project is moving forward.