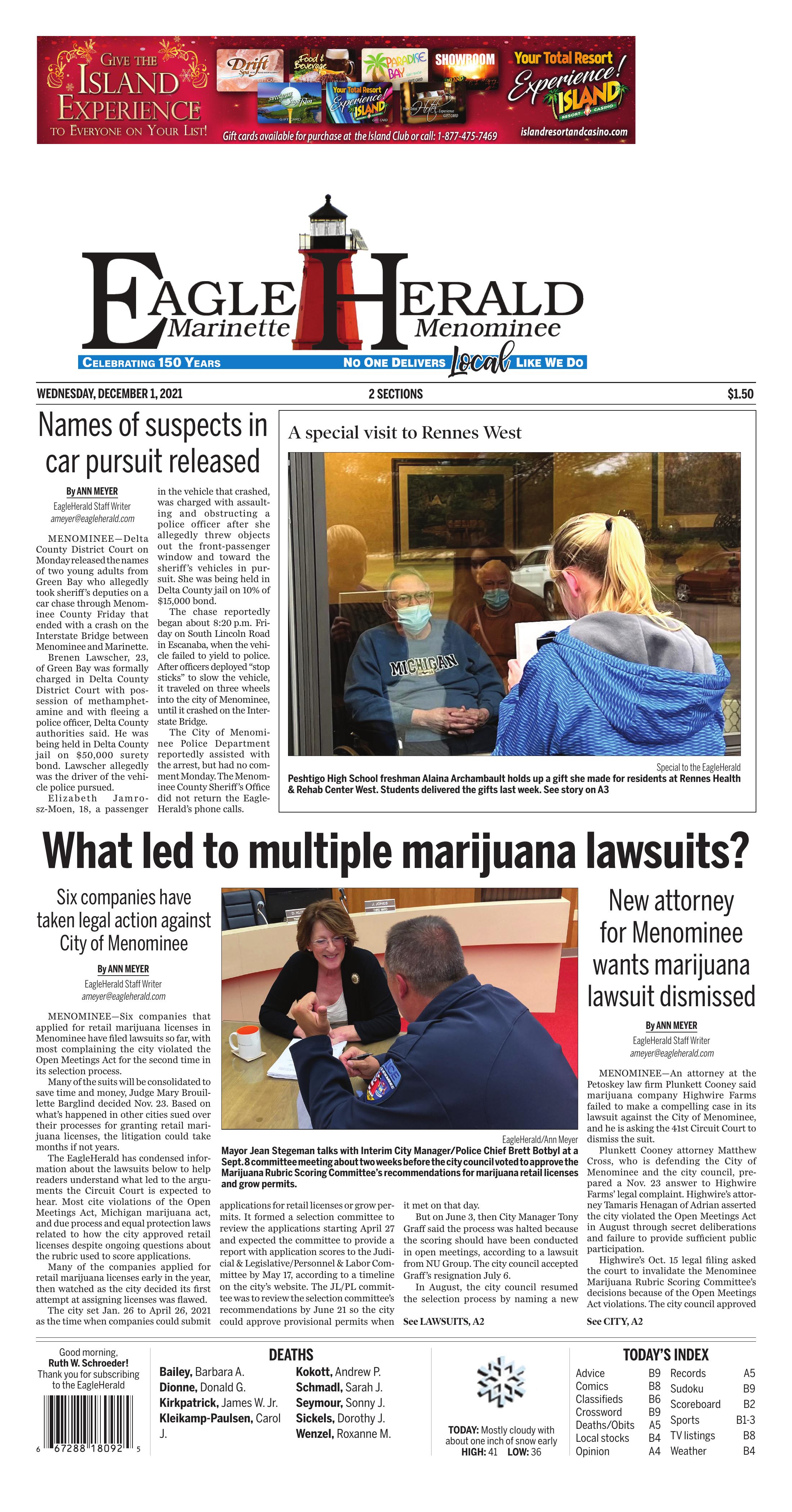 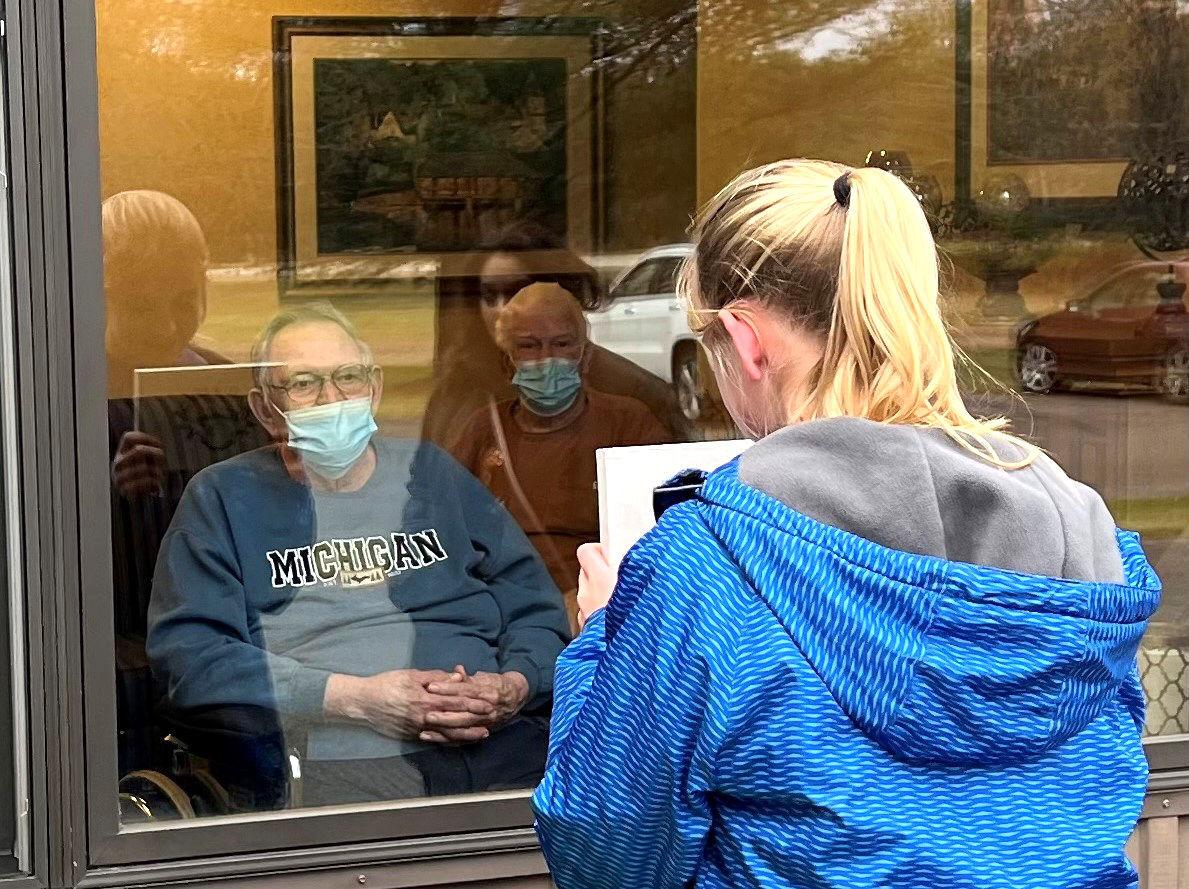 Peshtigo High School freshman Alaina Archambault holds up a gift she made for residents at Rennes Health & Rehab Center West. Students delivered the gifts last week. See story on A3

Steven Eckley, standing, of Higher Love, is shown at a City of Menominee meeting where he voiced his frustration.

MENOMINEE—Six companies that applied for retail marijuana licenses in Menominee have filed lawsuits so far, with most complaining the city violated the Open Meetings Act for the second time in its selection process.

Many of the suits will be consolidated to save time and money, Judge Mary Brouillette Barglind decided Nov. 23. Based on what’s happened in other cities sued over their processes for granting retail marijuana licenses, the litigation could take months if not years.

The EagleHerald has condensed information about the lawsuits below to help readers understand what led to the arguments the Circuit Court is expected to hear. Most cite violations of the Open Meetings Act, Michigan marijuana act, and due process and equal protection laws related to how the city approved retail licenses despite ongoing questions about the rubric used to score applications.

Many of the companies applied for retail marijuana licenses early in the year, then watched as the city decided its first attempt at assigning licenses was flawed.

The city set Jan. 26 to April 26, 2021 as the time when companies could submit applications for retail licenses or grow permits. It formed a selection committee to review the applications starting April 27 and expected the committee to provide a report with application scores to the Judicial & Legislative/Personnel & Labor Committee by May 17, according to a timeline on the city’s website. The JL/PL committee was to review the selection committee’s recommendations by June 21 so the city could approve provisional permits when it met on that day.

But on June 3, then City Manager Tony Graff said the process was halted because the scoring should have been conducted in open meetings, according to a lawsuit from NU Group. The city council accepted Graff’s resignation July 6.

In August, the city council resumed the selection process by naming a new Marijuana Rubric Scoring Committee compose of Interim City Manager/Police Chief Brett Botbyl, Fire Chief Mark Petersen and then City Engineer/Public Works Director Tricia Alwin, who has since left the city. At a JL/PL meeting Aug. 12, committee chair William Plemel said, “We did this once in secret and we don’t want to do it the same way. I want to be darn sure that the committee looks at this stuff again, after hearing the complaints we’ve all heard, to make sure we do it right the first time.”

Mayor Jean Stegeman said, “If I am correct in understanding the city attorney’s advice, it is to correct the previous errors made by the previous manager and move forward.”

At a Menominee City Council meeting Aug. 16 where the council approved the selection committee, Botbyl assured council members he was up to the task of scoring applications.

“Here is what I’m asking: I’m asking you to put your faith in me, and I’ll get it done,” Botbyl said. “I will set up the scoring committee. I will get it done. It will be done publicly.”

Council member Dennis Klitzke suggested council members take the time to review terms used in the application to ensure they were clearly defined because ambiguous language had been an issue. But Botbyl said, “Putting this off will not save time.”

In August, about seven months since the application process opened, marijuana applicants were expressing hope as well as frustration. Logan Stauber, co-chief executive officer at The Fire Station Cannabis Co. told the EagleHerald, “We spent at least four months working on the project,” Stauber said after the meeting. “This has been a very long process.”

The Marijuana Rubric Scoring Committee had scheduled public meetings Aug. 24, 25 and 26, but canceled the Aug. 25 meeting after announcing application scores on Aug. 24. The highest possible score of 50 points was awarded to Attitude Wellness/Lume for retail licenses for medical and adult-use marijuana. The lowest score of 41 was given to The Woods and to NU Group.

As soon as the scores were announced, several marijuana companies and their lawyers took issue with what they considered arbitrary scoring. Each member of the scoring committee assigned the same score to every application. Botbyl said he would provide time on Aug. 26 for companies to speak.

At an Aug. 26 Marijuana Rubric Scoring Committee meeting, representatives of marijuana companies said the committee overlooked pertinent information or made arbitrary decisions. After OI Holdings/Higher Love’s application for a retail license failed to earn six points for using and improving an existing building, owner Joni Moore brought poster-size plans showing proposed improvements to an existing building at 3120 10th St., but the committee did not change the application’s score.

At the same meeting, The Fire Station’s scores were revised to 50 points, the highest possible score.

Many other applicants left the meeting frustrated and several people suggested the companies would file lawsuits based on what many said was a flawed rubric.

On Sept. 7, the JL/PL Committee received Botbyl’s memo with recommendations for licenses but refrained from endorsing them before sending them to the city council. The recommendations departed from using the top scores to determine which companies would receive licenses.

At its Sept. 20 meeting, seven city council members were present and allowed to vote. They approved without opposition the scoring committee’s recommendations for retail licenses. Council Member Heather Nelson’s absence from the meeting was excused, and Council Member Dennis Klitzke was recused from voting because of a conflict of interest.

That question is the basis of Attitude Wellness’ lawsuit. Its Sept. 24 complaint said the city failed to select the “best suited” applicants, as is required by Michigan’s marijuana act, because it didn’t provide Attitude Wellness with a recreational-use retail license despite the fact it received perfect scores of 50 on both of its applications. On Nov. 9, Attitude Wellness/Lume received the Menominee Planning Commission’s approval to proceed with plans to open a marijuana store where La Cabana restaurant is located on 10th Street. It still hopes to sell adult-use recreational marijuana in Menominee.

On Oct. 7, NU Group filed suit calling the application process flawed. It said the city violated the Open Meetings Act, due process and equal protection laws by holding private meetings, overlooking important information and stating the scoring was not subject to appeal.

On Oct 15, Highwire Farms filed a lawsuit saying the City of Menominee’s selection process was unfair and citing violations of the Open Meetings Act. Rize filed a Motion to Intervene in the case, stating its due process rights are at stake if the court decides the Highwire case without considering how it would affect Rize’s plans to open a store on property it purchased for that purpose.

On Nov. 12, OI Holdings and Higher Love filed a lawsuit against the City of Menominee asking the court to reverse the Marijuana Scoring Committee’s decisions, void marijuana retail licenses issued and provide compensation for costs the company incurred because of the city’s errors. The lawsuit cited violations of the Open Meetings Act, Michigan marijuana act and due process.

On Nov. 19, attorney Matthew Cross of Plunkett Cooney was assigned to defend the City of Menominee, its employees and city council members against the suing companies. He said he is the only attorney from Plunkett Cooney representing the city.

On. Nov. 23, Judge Barglind listened to attorneys for various suing companies before deciding most of the cases will be consolidated into one.

MENOMINEE—Delta County District Court on Monday released the names of two young adults from Green Bay who allegedly took sheriff’s deputies on a car chase through Menominee County Friday that ended with a crash on the Interstate Bridge between Menominee and Marinette.

Brenen Lawscher, 23, of Green Bay was formally charged in Delta County District Court with possession of methamphetamine and with fleeing a police officer, Delta County authorities said. He was being held in Delta County jail on $50,000 surety bond. Lawscher allegedly was the driver of the vehicle police pursued.

Elizabeth Jamrosz-Moen, 18, a passenger in the vehicle that crashed, was charged with assaulting and obstructing a police officer after she allegedly threw objects out the front-passenger window and toward the sheriff’s vehicles in pursuit. She was being held in Delta County jail on 10% of $15,000 bond.

The chase reportedly began about 8:20 p.m. Friday on South Lincoln Road in Escanaba, when the vehicle failed to yield to police. After officers deployed “stop sticks” to slow the vehicle, it traveled on three wheels into the city of Menominee, until it crashed on the Interstate Bridge.

The City of Menominee Police Department reportedly assisted with the arrest, but had no comment Monday. The Menominee County Sheriff’s Office did not return the EagleHerald’s phone calls.

MENOMINEE—An attorney at the Petoskey law firm Plunkett Cooney said marijuana company Highwire Farms failed to make a compelling case in its lawsuit against the City of Menominee, and he is asking the 41st Circuit Court to dismiss the suit.

Cross disputed many of Highwire’s assertions point by point and concluded Highwire failed to present a “genuine issue.”

While their arguments differ, most companies suing the city say it violated the Open Meetings Act and Michigan’s Regulation and Taxation of Marijuana Act (MRTMA) during the process for reviewing applications and approving retail marijuana licenses.

Highwire’s complaint stated the city was in direct violation of the Open Meetings Act during an Aug. 26 meeting, despite knowledge of a similar, earlier violation. “The Scoring Committee again failed to deliberate in the public meeting (i.e. whispering to one another at the dais), and not allowing the public to hear any deliberation over the applicant scoring and reconsideration,” the complaint said.

In a one word response to this allegation, Cross’s answer was “Denied.” Cross delivered most of the city’s answers to Highwire’s allegations in short phrases or one-word answers, such as “admitted,” “denied” or “neither admit nor deny.”

Cross, who apparently was named to defend the city and the city council shortly before he filed the response with the court, also stated, “Defense reserves the right to assert additional affirmative defenses as they may become known through the discovery process.”

The discovery process is the work attorneys and their clients perform to support the statements they’ll make as the case continues. Where the legal document stated, “neither admit nor deny,” Cross provided this explanation: “Defendants … lack knowledge or information sufficient to form a belief about the truth of this allegation.” The city’s answers could change as it uncovers new information during the discovery process.

The city is expected to say it corrected earlier issues in August when a scoring committee reviewed applications from marijuana companies seeking licenses, after it had noted a problem with the selection process performed earlier in the year when Tony Graff was the city manager.