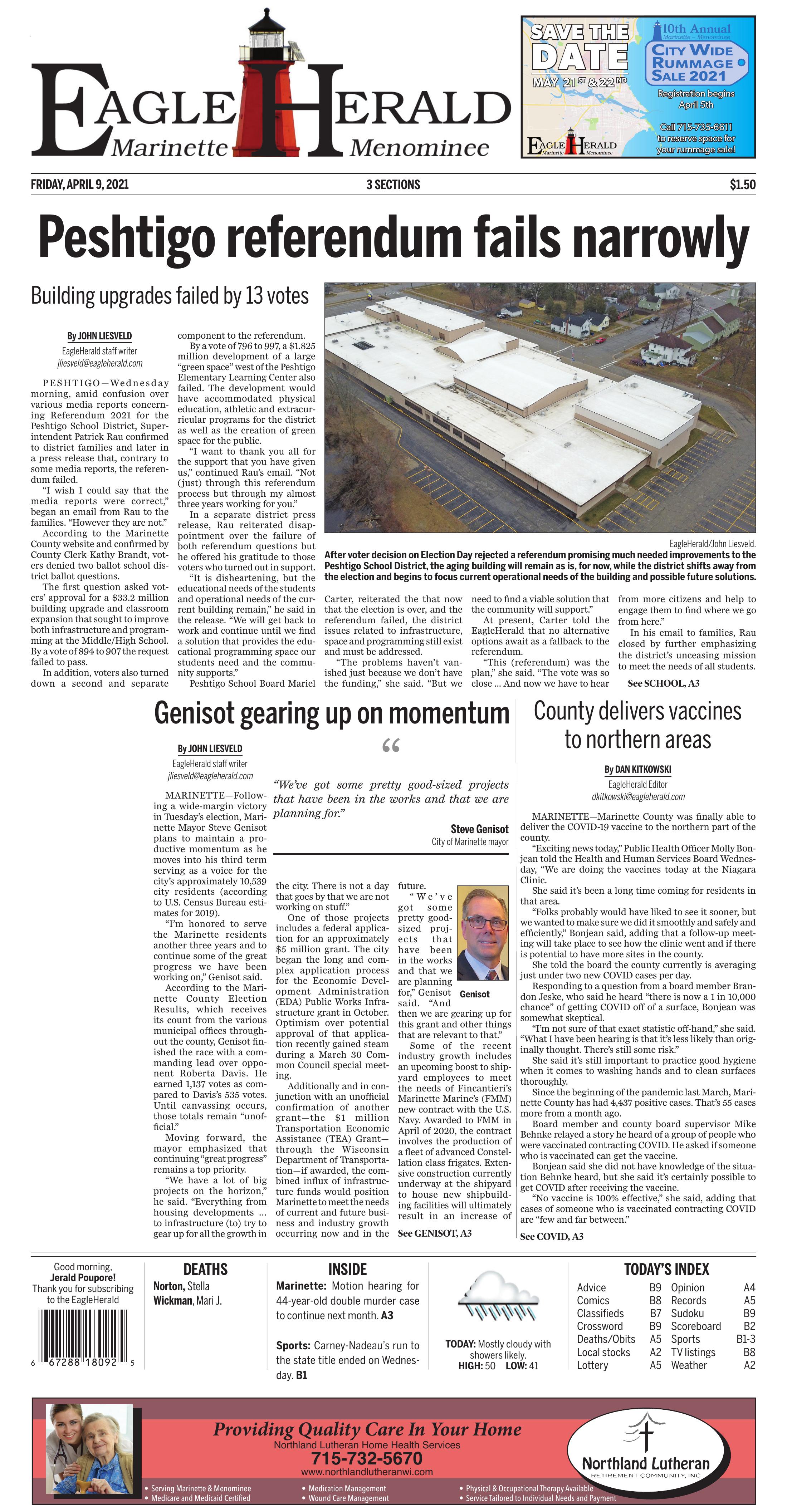 After voter decision on Election Day rejected a referendum promising much needed improvements to the Peshtigo School District, the aging building will remain as is, for now, while the district shifts away from the election and begins to focus current operational needs of the building and possible future solutions.

PESHTIGO—Wednesday morning, amid confusion over various media reports concerning Referendum 2021 for the Peshtigo School District, Superintendent Patrick Rau confirmed to district families and later in a press release that, contrary to some media reports, the referendum failed.

“I wish I could say that the media reports were correct,” began an email from Rau to the families. “However they are not.”

The first question asked voters’ approval for a $33.2 million building upgrade and classroom expansion that sought to improve both infrastructure and programming at the Middle/High School. By a vote of 894 to 907 the request failed to pass.

In addition, voters also turned down a second and separate component to the referendum.

By a vote of 796 to 997, a $1.825 million development of a large “green space” west of the Peshtigo Elementary Learning Center also failed. The development would have accommodated physical education, athletic and extracurricular programs for the district as well as the creation of green space for the public.

“I want to thank you all for the support that you have given us,” continued Rau’s email. “Not (just) through this referendum process but through my almost three years working for you.”

In a separate district press release, Rau reiterated disappointment over the failure of both referendum questions but he offered his gratitude to those voters who turned out in support.

Peshtigo School Board Mariel Carter, reiterated the that now that the election is over, and the referendum failed, the district issues related to infrastructure, space and programming still exist and must be addressed.

“The problems haven’t vanished just because we don’t have the funding,” she said. “But we need to find a viable solution that the community will support.”

At present, Carter told the EagleHerald that no alternative options await as a fallback to the referendum.

“This (referendum) was the plan,” she said. “The vote was so close ... And now we have to hear from more citizens and help to engage them to find where we go from here.”

In his email to families, Rau closed by further emphasizing the district’s unceasing mission to meet the needs of all students.

“A building does not define us,” he wrote. “We promise to continue to provide the best learning opportunities for your children that we possibly can.”

In a statement to the EagleHerald, Rau affirmed school board members’ commitment to utilizing what they learned to continue moving forward and searching for options that address the district’s challenges.

“From here, the board will discuss the results and our process at our (Wednesday) meeting,” he said. “It will be an important time to reflect on the process and provided solution.”

According to (unofficial results) posted Wednesday, while a majority of City and Town of Peshtigo residents voted in support of the 33.2 million Middle/High School renovation question (746 to 676), voters from the Town of Grover tipped the scales to vote the referendum down, casting 148 “yes” votes to 231 “no” votes.

Until the district performs canvassing of the election results, all tallies remain unofficial.

The Peshtigo School Board will meet Wednesday at 6 p.m. at the Peshtigo Elementary School to discuss future options.

MARINETTE—Following a wide-margin victory in Tuesday’s election, Marinette Mayor Steve Genisot plans to maintain a productive momentum as he moves into his third term serving as a voice for the city’s approximately 10,539 city residents (according to U.S. Census Bureau estimates for 2019).

“I’m honored to serve the Marinette residents another three years and to continue some of the great progress we have been working on,” Genisot said.

According to the Marinette County Election Results, which receives its count from the various municipal offices throughout the county, Genisot finished the race with a commanding lead over opponent Roberta Davis. He earned 1,137 votes as compared to Davis’s 535 votes. Until canvassing occurs, those totals remain “unofficial.”

“We have a lot of big projects on the horizon,” he said. “Everything from housing developments … to infrastructure (to) try to gear up for all the growth in the city. There is not a day that goes by that we are not working on stuff.”

One of those projects includes a federal application for an approximately $5 million grant. The city began the long and complex application process for the Economic Development Administration (EDA) Public Works Infrastructure grant in October. Optimism over potential approval of that application recently gained steam during a March 30 Common Council special meeting.

Additionally and in conjunction with an unofficial confirmation of another grant—the $1 million Transportation Economic Assistance (TEA) Grant—through the Wisconsin Department of Transportation—if awarded, the combined influx of infrastructure funds would position Marinette to meet the needs of current and future business and industry growth occurring now and in the future.

“We’ve got some pretty good-sized projects that have been in the works and that we are planning for,” Genisot said. “And then we are gearing up for this grant and other things that are relevant to that.”

Some of the recent industry growth includes an upcoming boost to shipyard employees to meet the needs of Fincantieri’s Marinette Marine’s (FMM) new contract with the U.S. Navy. Awarded to FMM in April of 2020, the contract involves the production of a fleet of advanced Constellation class frigates. Extensive construction currently underway at the shipyard to house new shipbuilding facilities will ultimately result in an increase of employees working at the shipyard. Moreover, those extra employees also bring the subsequent increase in traffic coming and going through the Main Street corridor of Marinette. To counter future traffic congestion, potential safety issues and parking shortages, infrastructure expansion will be key.

“I’m honored to continue the growth (in Marinette),” Genisot said. “I have a great team of people and hopefully we can continue some of the great progress … they are all good things; and there will be more to come.”

In a post to her Facebook campaign page, “Roberta Davis for Marinette Mayor,” Davis provided a statement expressing gratitude and continued commitment to community involvement.

“I want to thank you all, from the bottom of my heart, for your support over the last few months,” the statement read. “While the results of the election were not in my favor, I’ll continue to work for the community from the sidelines to make positive changes for all of us.”

MARINETTE—Marinette County was finally able to deliver the COVID-19 vaccine to the northern part of the county.

“Exciting news today,” Public Health Officer Molly Bonjean told the Health and Human Services Board Wednesday, “We are doing the vaccines today at the Niagara Clinic.

She said it’s been a long time coming for residents in that area.

“Folks probably would have liked to see it sooner, but we wanted to make sure we did it smoothly and safely and efficiently,” Bonjean said, adding that a follow-up meeting will take place to see how the clinic went and if there is potential to have more sites in the county.

She told the board the county currently is averaging just under two new COVID cases per day.

Responding to a question from a board member Brandon Jeske, who said he heard “there is now a 1 in 10,000 chance” of getting COVID off of a surface, Bonjean was somewhat skeptical.

“I’m not sure of that exact statistic off-hand,” she said. “What I have been hearing is that it’s less likely than originally thought. There’s still some risk.”

She said it’s still important to practice good hygiene when it comes to washing hands and to clean surfaces thoroughly.

Since the beginning of the pandemic last March, Marinette County has had 4,437 positive cases. That’s 55 cases more from a month ago.

Board member and county board supervisor Mike Behnke relayed a story he heard of a group of people who were vaccinated contracting COVID. He asked if someone who is vaccinated can get the vaccine.

Bonjean said she did not have knowledge of the situation Behnke heard, but she said it’s certainly possible to get COVID after receiving the vaccine.

“No vaccine is 100% effective,” she said, adding that cases of someone who is vaccinated contracting COVID are “few and far between.”

“(Vaccines) are still one of the best defenses that we have against the pandemic and I definitely encourage everyone to still get vaccinated,” Bonjean said.

Board member and county supervisor Tom Mailand asked if residents have a choice of what vaccine they receive.

Bonjean said at the county’s Prevea location at the UW-Green Bay Marinette Campus field house, residents can go online and see what brand of vaccination is being offered on a particular day. She said it may take longer to receive the one-shot Johnson & Johnson vaccine.