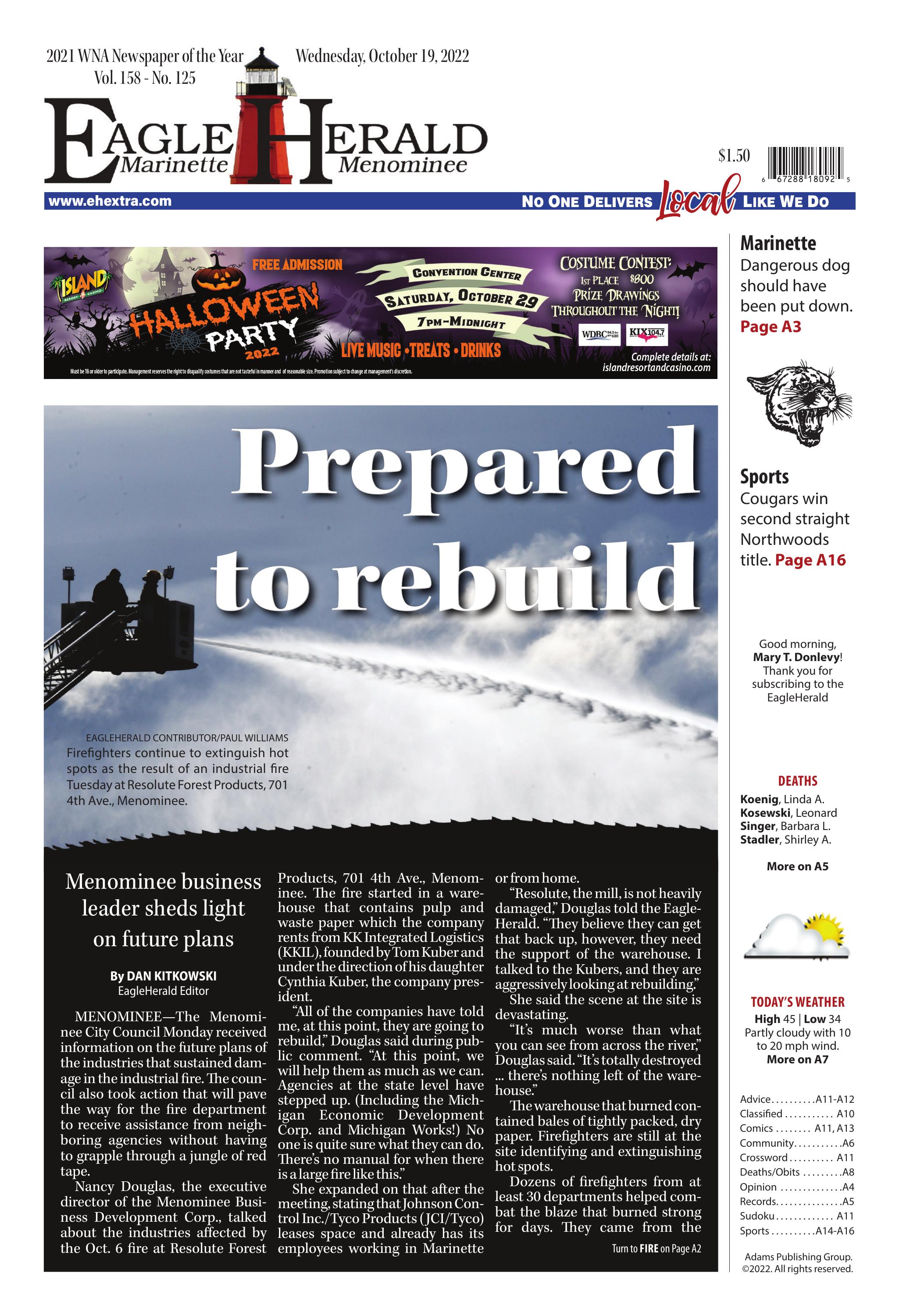 Menominee Fire Chief Mark Petersen speaks about the benefits of the city joining a mutual aid system Monday at the city council meeting.

MENOMINEE—The Menominee City Council Monday received information on the future plans of the industries that sustained damage in the industrial fire. The council also took action that will pave the way for the fire department to receive assistance from neighboring agencies without having to grapple through a jungle of red tape.

Nancy Douglas, the executive director of the Menominee Business Development Corp., talked about the industries affected by the Oct. 6 fire at Resolute Forest Products, 701 4th Ave., Menominee. The fire started in a warehouse that contains pulp and waste paper which the company rents from KK Integrated Logistics (KKIL), founded by Tom Kuber and under the direction of his daughter Cynthia Kuber, the company president.

“All of the companies have told me, at this point, they are going to rebuild,” Douglas said during public comment. “At this point, we will help them as much as we can. Agencies at the state level have stepped up. (Including the Michigan Economic Development Corp. and Michigan Works!) No one is quite sure what they can do. There’s no manual for when there is a large fire like this.”

She expanded on that after the meeting, stating that Johnson Control Inc./Tyco Products (JCI/Tyco) leases space and already has its employees working in Marinette or from home.

“Resolute, the mill, is not heavily damaged,” Douglas told the EagleHerald. “They believe they can get that back up, however, they need the support of the warehouse. I talked to the Kubers, and they are aggressively looking at rebuilding.”

She said the scene at the site is devastating.

“It’s much worse than what you can see from across the river,” Douglas said. “It’s totally destroyed ... there’s nothing left of the warehouse.”

The warehouse that burned contained bales of tightly packed, dry paper. Firefighters are still at the site identifying and extinguishing hot spots.

Dozens of firefighters from at least 30 departments helped combat the blaze that burned strong for days. They came from the entire Upper Peninsula, Marinette County, downstate Michigan and northeastern Wisconsin.

Menominee City Manager Brett Botbyl, a former police chief who has seen plenty in his career, called it a humbling experience. He said everyone involved deserves to be thanked.

“First and foremost, I think we need to recognize or at least note that our staff, firefighters, police officers, DPW and the rest of the city workers have just done an unbelievable job,” he said during his city manager’s report. “Not to mention all the support that we have received from the city of Marinette and the surrounding area. I believe we are in excess of 50 departments (fire departments and other agencies) that are helping us with this.

“It is actually humbling to see everybody come together toward a common goal. When you do see our staff, just remember to thank them for their support as well.”

Botbyl also reported that Menominee will receive $250,000 of state funds to be used in a variety of ways.

“We are in the process right now of establishing what those costs might be,” he explained. “Typical expenses that we can be reimbursed on are cost to repair buildings, transportation, infrastructure—if there are damage to our roads or anything of that nature—overtime cost, contracts for emergency response, shelter hotel, fuel for equipment.”

Botbyl said a lot of fuel is burned with equipment running around the clock. He said because of that heavy use, breakdowns occur, resulting in repair costs.

Douglas, on Tuesday said Menominee County also is in line for $250,000 in state aid to help with overtime and contract costs. She said when a State of Emergency is declared, municipalities are guaranteed those funds. “We may have to work some more with the state on additional funding once we know the true cost to the city and the county,” she said.

Later in the meeting, the council approved a resolution to join the Michigan Mutual Aid Box Alarm System (MABAS). This will allow for the city to receive assistance from all over the country without having to wait for the governor to declare a State of Emergency.

“MABAS will provide equipment and resources that we can’t afford,” Menominee Fire Chief Mark Petersen said. “This is a vital issue.”

Marinette Fire Chief Jay Heckel was at the meeting and he talked about the benefits of joining MABAS. Josh Dessart, a MABAS coordinator for Menominee County and the entire U.P., also was in attendance.

The council approved the resolution by an 8-0 vote. Council member Wendy Baron was excused.