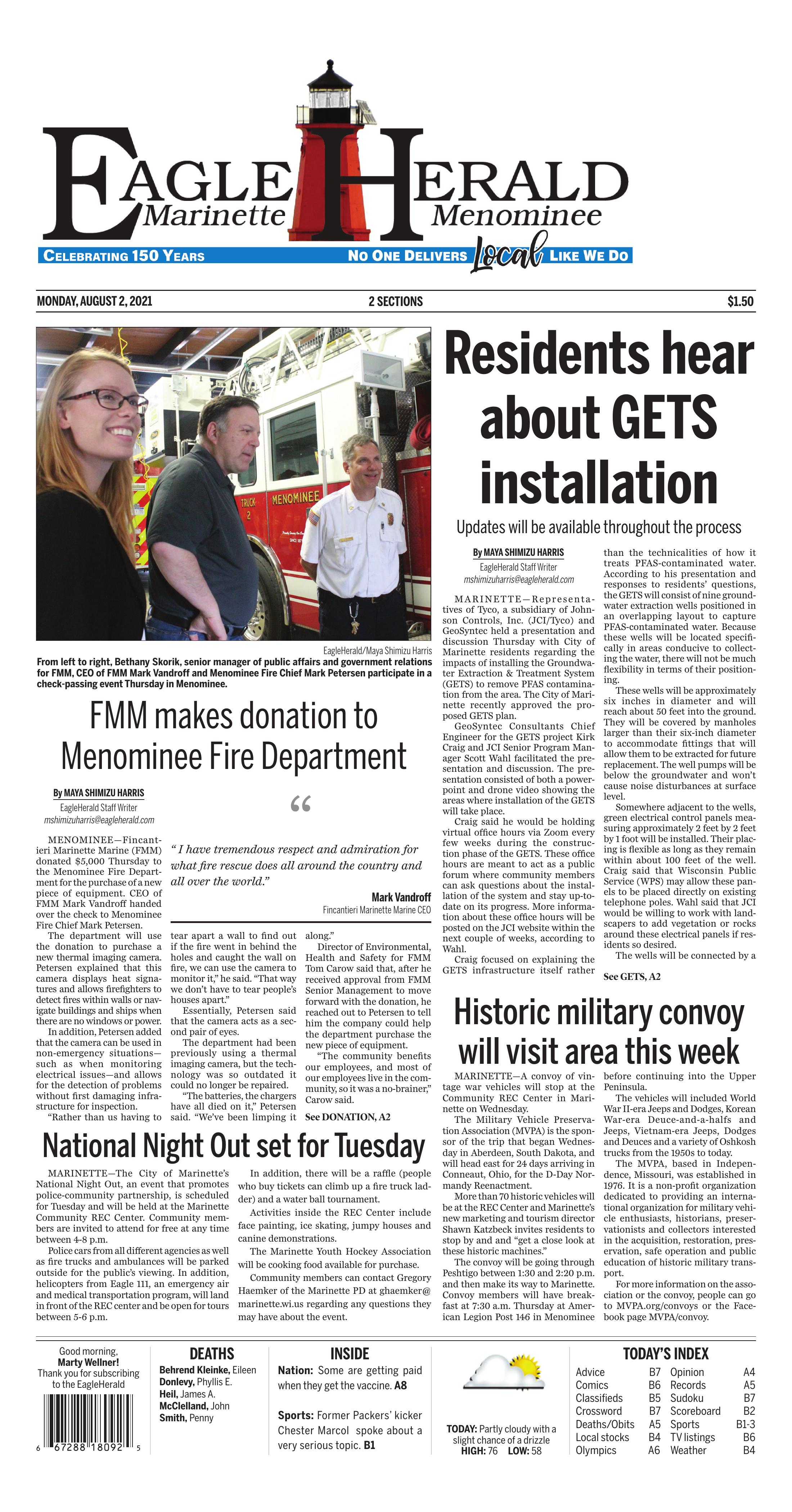 MENOMINEE—Fincantieri Marinette Marine (FMM) donated $5,000 Thursday to the Menominee Fire Department for the purchase of a new piece of equipment. CEO of FMM Mark Vandroff handed over the check to Menominee Fire Chief Mark Petersen.

The department will use the donation to purchase a new thermal imaging camera. Petersen explained that this camera displays heat signatures and allows firefighters to detect fires within walls or navigate buildings and ships when there are no windows or power.

In addition, Petersen added that the camera can be used in non-emergency situations—such as when monitoring electrical issues—and allows for the detection of problems without first damaging infrastructure for inspection.

“Rather than us having to tear apart a wall to find out if the fire went in behind the holes and caught the wall on fire, we can use the camera to monitor it,” he said. “That way we don’t have to tear people’s houses apart.”

Essentially, Petersen said that the camera acts as a second pair of eyes.

The department had been previously using a thermal imaging camera, but the technology was so outdated it could no longer be repaired.

“The batteries, the chargers have all died on it,” Petersen said. “We’ve been limping it along.”

Director of Environmental, Health and Safety for FMM Tom Carow said that, after he received approval from FMM Senior Management to move forward with the donation, he reached out to Petersen to tell him the company could help the department purchase the new piece of equipment.

During the ceremony, Vandroff reflected on his time working closely with fire rescue both as a former member of the navy and now as the CEO of FMM.

“I have tremendous respect and admiration for what fire rescue does all around the country and all over the world,” Vandoff said. “I’m happy that we’re able to have this partnership with the fire department.”

MARINETTE—The City of Marinette’s National Night Out, an event that promotes police-community partnership, is scheduled for Tuesday and will be held at the Marinette Community REC Center. Community members are invited to attend for free at any time between 4-8 p.m.

Police cars from all different agencies as well as fire trucks and ambulances will be parked outside for the public’s viewing. In addition, helicopters from Eagle 111, an emergency air and medical transportation program, will land in front of the REC center and be open for tours between 5-6 p.m.

In addition, there will be a raffle (people who buy tickets can climb up a fire truck ladder) and a water ball tournament.

The Marinette Youth Hockey Association will be cooking food available for purchase.

Community members can contact Gregory Haemker of the Marinette PD at ghaemker@marinette.wi.us regarding any questions they may have about the event.

MARINETTE—Representatives of Tyco, a subsidiary of Johnson Controls, Inc. (JCI/Tyco) and GeoSyntec held a presentation and discussion Thursday with City of Marinette residents regarding the impacts of installing the Groundwater Extraction & Treatment System (GETS) to remove PFAS contamination from the area. The City of Marinette recently approved the proposed GETS plan.

GeoSyntec Consultants Chief Engineer for the GETS project Kirk Craig and JCI Senior Program Manager Scott Wahl facilitated the presentation and discussion. The presentation consisted of both a powerpoint and drone video showing the areas where installation of the GETS will take place.

Craig said he would be holding virtual office hours via Zoom every few weeks during the construction phase of the GETS. These office hours are meant to act as a public forum where community members can ask questions about the installation of the system and stay up-to-date on its progress. More information about these office hours will be posted on the JCI website within the next couple of weeks, according to Wahl.

Craig focused on explaining the GETS infrastructure itself rather than the technicalities of how it treats PFAS-contaminated water. According to his presentation and responses to residents’ questions, the GETS will consist of nine groundwater extraction wells positioned in an overlapping layout to capture PFAS-contaminated water. Because these wells will be located specifically in areas conducive to collecting the water, there will not be much flexibility in terms of their positioning.

These wells will be approximately six inches in diameter and will reach about 50 feet into the ground. They will be covered by manholes larger than their six-inch diameter to accommodate fittings that will allow them to be extracted for future replacement. The pumps have a 3- to 5-year life expectancy. Being below the groundwater, they won’t cause noise disturbances at surface level.

Somewhere adjacent to the wells, green electrical control panels measuring approximately 2 feet by 2 feet by 1 foot will be installed. Their placing is flexible as long as they remain within about 100 feet of the well. Craig said that Wisconsin Public Service (WPS) may allow these panels to be placed directly on existing telephone poles. Wahl said that JCI would be willing to work with landscapers to add vegetation or rocks around these electrical panels if residents so desired.

The wells will be connected by a network of pipes installed using directional boring, a method of drilling that allows for the installation of conduits under obstacles such as streets or wetlands. Using this method, the drill rig will be set off to the side, and one lane of the road under construction will always be left open. These horizontal pipes will be located at a depth of about 6 feet, with variations in places where it will need to be routed underneath obstacles.

All piping will be made from high-density polyethylene, a material that, according to Craig, is bulletproof and corrosion resistant. Spare piping is also included in the design to accommodate any potential future need to add another well.

Several residents raised concerns about the potential damage cold weather could cause to the system’s components.

More specifically, one resident made the point that a city snow plow coming around the corner of James Street and Florence Street would cause a buildup of snow that could cover one of the control panel’s proposed locations there. Craig said the plan could accommodate this by putting the control panel on a power pole farther away from the corner.

Another resident said that the proposed well located at the end of Oakview Road would be covered during the winter when snow gets pushed to the end of the road. Craig noted this point but didn’t make any suggestions for immediate solutions.

Genisot said that Tyco has a contract with the City of Marinette that requires the company to annually review any issues with the GETS. He added that Tyco is also obligated to secure a $5 million surety bond in case it defaults on any of its obligations under its contract with the city.

Craig also explained that, although the GETS will contain the PFAS contaminated water relatively quickly, actually cleaning the water could take decades depending on how much the system can pump without drying out the surrounding wetlands.

MARINETTE—A convoy of vintage war vehicles will stop at the Community REC Center in Marinette on Wednesday.

The Military Vehicle Preservation Association (MVPA) is the sponsor of the trip that began Wednesday in Aberdeen, South Dakota, and will head east for 24 days arriving in Conneaut, Ohio, for the D-Day Normandy Reenactment.

More than 70 historic vehicles will be at the REC Center and Marinette’s new marketing and tourism director Shawn Katzbeck invites residents to stop by and and “get a close look at these historic machines.”

The convoy will be going through Peshtigo between 1:30 and 2:20 p.m. and then make its way to Marinette. Convoy members will have breakfast at 7:30 a.m. Thursday at American Legion Post 146 in Menominee before continuing into the Upper Peninsula.

The vehicles will included World War II-era Jeeps and Dodges, Korean War-era Deuce-and-a-halfs and Jeeps, Vietnam-era Jeeps, Dodges and Deuces and a variety of Oshkosh trucks from the 1950s to today.

The MVPA, based in Independence, Missouri, was established in 1976. It is a non-profit organization dedicated to providing an international organization for military vehicle enthusiasts, historians, preservationists and collectors interested in the acquisition, restoration, preservation, safe operation and public education of historic military transport.

For more information on the association or the convoy, people can go to MVPA.org/convoys or the Facebook page MVPA/convoy.