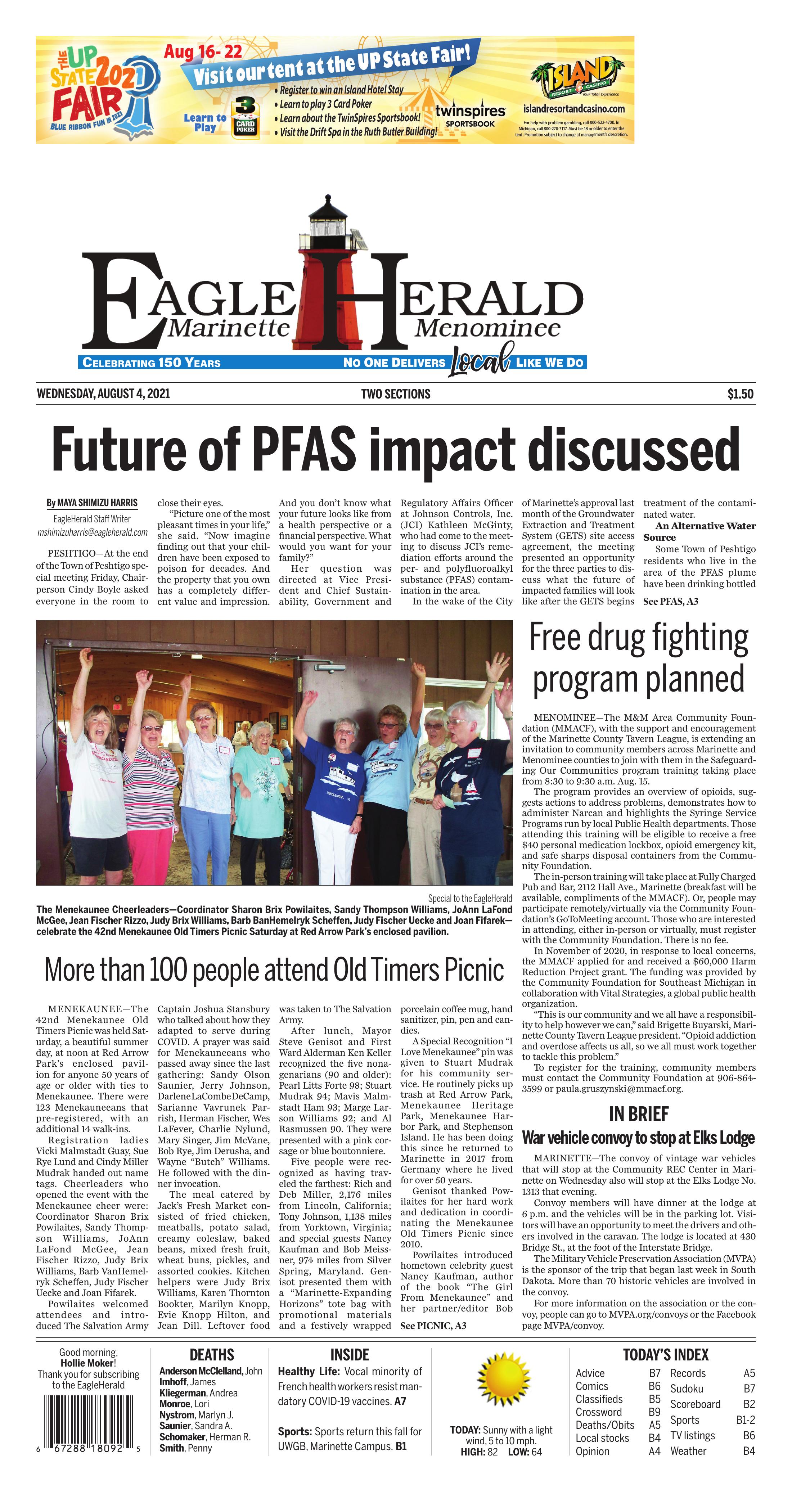 PESHTIGO—At the end of the Town of Peshtigo special meeting Friday, Chairperson Cindy Boyle asked everyone in the room to close their eyes.

“Picture one of the most pleasant times in your life,” she said. “Now imagine finding out that your children have been exposed to poison for decades. And the property that you own has a completely different value and impression. And you don’t know what your future looks like from a health perspective or a financial perspective. What would you want for your family?”

Her question was directed at Vice President and Chief Sustainability, Government and Regulatory Affairs Officer at Johnson Controls, Inc. (JCI) Kathleen McGinty, who had come to the meeting to discuss JCI’s remediation efforts around the per- and polyfluoroalkyl substance (PFAS) contamination in the area.

In the wake of the City of Marinette’s approval last month of the Groundwater Extraction and Treatment System (GETS) site access agreement, the meeting presented an opportunity for the three parties to discuss what the future of impacted families will look like after the GETS begins treatment of the contaminated water.

Some Town of Peshtigo residents who live in the area of the PFAS plume have been drinking bottled water since 2018. Finding a more convenient long-term source of water for affected individuals remains an obstacle.

Tyco’s 2019 Remedial Action Options Report (RAOR) outlined six possibilities for alternative sources of water. Of the options in the report, the Wisconsin Department of Natural Resources (DNR) and JCI identified the possibility of expanding the public water system of the City of Marinette or digging private or cluster wells as solutions that are still being considered.

Supervisor Kayla Furton asked if Tyco had updated the RAOR to reflect the DNR’s requested edits regarding the feasibility of these options.

McGinty said that these edits have been made but that there may still be some outstanding questions on the report.

Remediation and Redevelopment Director of the Wisconsin DNR Christine Haag said, however, that the DNR still considers the RAOR to be incomplete:

“What the RAOR had not yet done was laid (the options) out from a political perspective,” she said. “Implementability is also about whether or not a community is willing to provide or to sell water, whether or not it’s feasible because the residents will accept it.”

The political aspect of these options has already proven to be an impediment; obtaining municipal water from the City of Marinette may no longer be possible given the city’s July 6 resolution rejecting the proposition.

Boyle asked McGinty what JCI’s alternative plan would be in light of this resolution.

McGinty said that JCI is still considering the option to dig private wells. Another option, she said, would be to obtain municipal water from the City of Peshtigo.

Of these alternatives, she said the municipal water source would be preferable.

McGinty said, however, that the City of Marinette still remains the most desirable option.

“For constructability reasons, the city of Marinette is a more efficient option to be able to build a water line and to build it in a timely kind of fashion,” she said.

According to a 2019 Tyco press release, obtaining water from the City of Peshtigo would require at least another five miles of pipes and could add years to the project because of additional permitting processes.

But McGinty also said that the possibility of having the City of Marinette provide municipal water to the Town of Peshtigo is not yet out of the question:

“I heard the mayor’s comments, and some of the other council members’ comments, even as the resolution was being passed that it was not a door slamming shut and that they would remain open to conversation,” she said.

According to the Marinette City Council Meeting Agenda released Monday, the council will revisit this resolution and possibly reconsider providing municipal water to the Town of Peshtigo.

Boundaries and Cleanup of the PFAS Plume

The Town of Peshtigo Board expressed concern regarding the uncertainty of how the contamination might impact residents in the future and what this means in terms of JCI’s responsibility toward these individuals.

Bauer said the tables from the Department of Natural Resources (DNR) GETS Remedial Action Design Report (RADR) show that the plume will spread over the coming decades.

But McGinty disagreed with Bauer’s claim.

“Our data and our science would not suggest that the plume is spreading,” she said. “We have a very clear view as to where the boundaries of that plume are.”

The RADR shows that the plume stays relatively bounded over a 30-year period. However, it also projects that the plume will move east into the bay of Green Bay over the coming decades and may eventually encompass areas that are not within the boundaries of JCI’s current settlement area.

Furthermore, Haag said that the DNR hasn’t yet signed off on JCI’s site investigation.

“We have not approved that all of the potential pathways that contamination could have traveled have been defined,” she said. “For instance, the DNR still has questions on whether or not there was an air transport mechanism.”

Because of these uncertainties, the DNR requested in February 2020 that Tyco conduct tests in an expanded investigation area.

Supervisor Kristen Edgar asked McGinty if, given these disagreements, the boundaries of the plume represented a non-negotiable hard-line.

“There’s nothing that’s a hard line because we need to come together and try to see what works for everybody,” McGinty said.

MENEKAUNEE—The 42nd Menekaunee Old Timers Picnic was held Saturday, a beautiful summer day, at noon at Red Arrow Park’s enclosed pavilion for anyone 50 years of age or older with ties to Menekaunee. There were 123 Menekauneeans that pre-registered, with an additional 14 walk-ins.

A Special Recognition “I Love Menekaunee” pin was given to Stuart Mudrak for his community service. He routinely picks up trash at Red Arrow Park, Menekaunee Heritage Park, Menekaunee Harbor Park, and Stephenson Island. He has been doing this since he returned to Marinette in 2017 from Germany where he lived for over 50 years.

Genisot thanked Powilaites for her hard work and dedication in coordinating the Menekaunee Old Timers Picnic since 2010.

Powilaites introduced hometown celebrity guest Nancy Kaufman, author of the book “The Girl From Menekaunee” and her partner/editor Bob Meissner. Both talked about their connection to Menekaunee. Nancy sold the books she brought and signed books that were previously purchased through Amazon.

T-shirts were sold by Judy Berge Reid to help keep the cost of the picnic down for next year. A display table included financial reports and photo booklets. Karen Thornton Bookter offered a 50/50 raffle that was won by Tony Johnson.

Volunteers are needed and appreciated to run this event efficiently. Handling the setup of tables and chairs was John Powilaites and Jeff Swanson. Many hands took part in the take-down, and Steve Enstrom handled the floor clean-up.

Menekaunee means “where the lodges are,” “the village.” It is located at the mouth of the Menominee River on the east side of Marinettte and was founded as a village in 1856 by the New York Lumber Company.

MENOMINEE—The M&M Area Community Foundation (MMACF), with the support and encouragement of the Marinette County Tavern League, is extending an invitation to community members across Marinette and Menominee counties to join with them in the Safeguarding Our Communities program training taking place from 8:30 to 9:30 a.m. Aug. 15.

The program provides an overview of opioids, suggests actions to address problems, demonstrates how to administer Narcan and highlights the Syringe Service Programs run by local Public Health departments. Those attending this training will be eligible to receive a free $40 personal medication lockbox, opioid emergency kit, and safe sharps disposal containers from the Community Foundation.

The in-person training will take place at Fully Charged Pub and Bar, 2112 Hall Ave., Marinette (breakfast will be available, compliments of the MMACF). Or, people may participate remotely/virtually via the Community Foundation’s GoToMeeting account. Those who are interested in attending, either in-person or virtually, must register with the Community Foundation. There is no fee.

In November of 2020, in response to local concerns, the MMACF applied for and received a $60,000 Harm Reduction Project grant. The funding was provided by the Community Foundation for Southeast Michigan in collaboration with Vital Strategies, a global public health organization.

“This is our community and we all have a responsibility to help however we can,” said Brigette Buyarski, Marinette County Tavern League president. “Opioid addiction and overdose affects us all, so we all must work together to tackle this problem.”

To register for the training, community members must contact the Community Foundation at 906-864-3599 or paula.gruszynski@mmacf.org.

News
Military vehicle convoy will also be at the Elks Lodge

Convoy members will have dinner at the lodge at 6 p.m. and the vehicles will be in the parking lot. Visitors will have an opportunity to meet the drivers and others involved in the caravan. The lodge is located at 430 Bridge St., at the foot of the Interstate Bridge.

The Military Vehicle Preservation Association (MVPA) is the sponsor of the trip that began last week in South Dakota. More than 70 historic vehicles are involved in the convoy.

For more information on the association or the convoy, people can go to MVPA.org/convoys or the Facebook page MVPA/convoy.