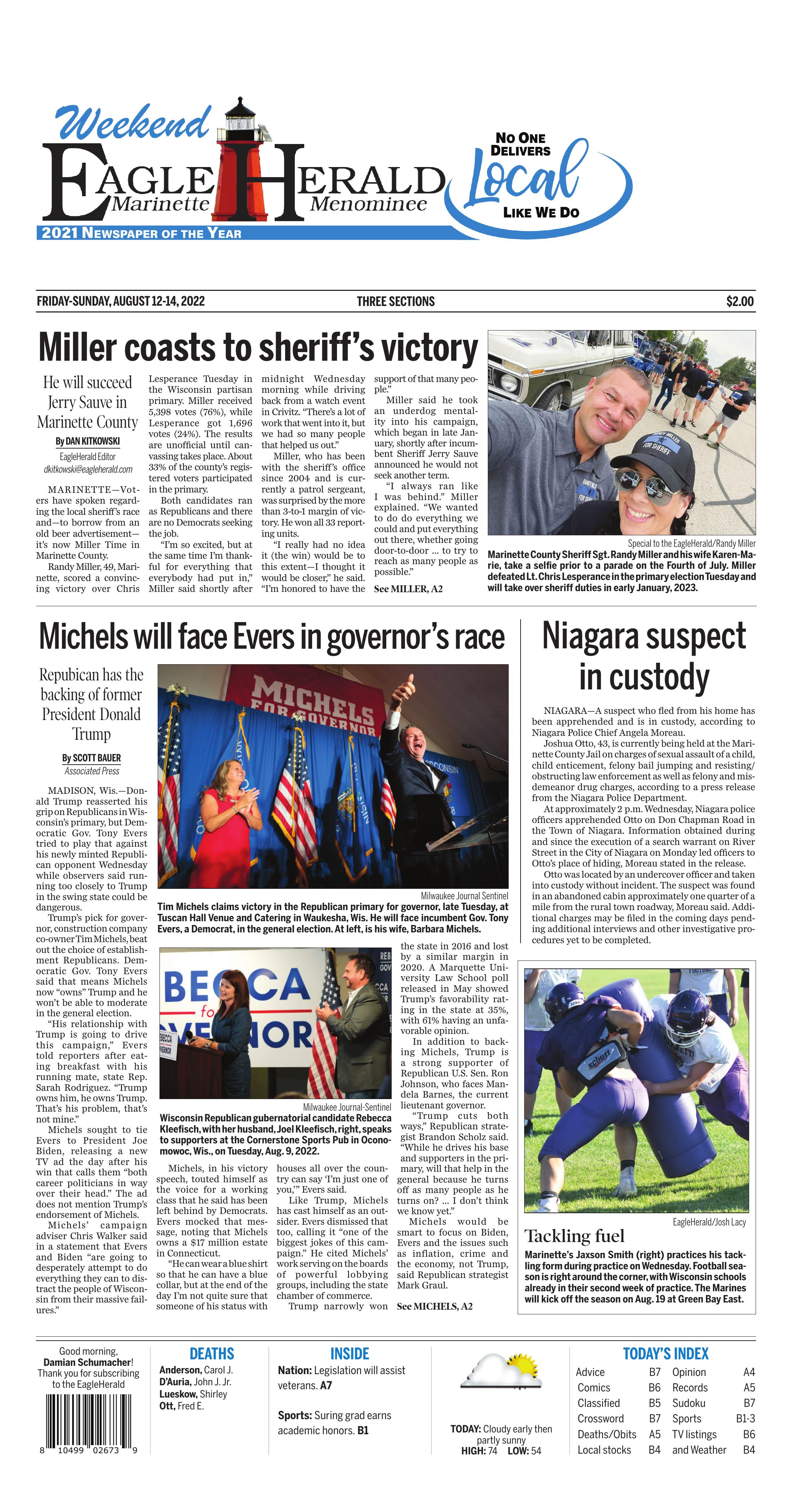 Marinette County Sheriff Sgt. Randy Miller and his wife Karen-Marie, take a selfie prior to a parade on the Fourth of July. Miller defeated Lt. Chris Lesperance in the primary election Tuesday and will take over sheriff duties in early January, 2023.

Special to the EagleHerald/Darren Jacobson

Randy Miller, 49, Marinette, scored a convincing victory over Chris Lesperance Tuesday in the Wisconsin partisan primary. Miller received 5,398 votes (76%), while Lesperance got 1,696 votes (24%). The results are unofficial until canvassing takes place. About 33% of the county’s registered voters participated in the primary.

Both candidates ran as Republicans and there are no Democrats seeking the job.

“I’m so excited, but at the same time I’m thankful for everything that everybody had put in,” Miller said shortly after midnight Wednesday morning while driving back from a watch event in Crivitz. “There’s a lot of work that went into it, but we had so many people that helped us out.”

Miller, who has been with the sheriff’s office since 2004 and is currently a patrol sergeant, was surprised by the more than 3-to-1 margin of victory. He won all 33 reporting units.

“I really had no idea it (the win) would be to this extent—I thought it would be closer,” he said. “I’m honored to have the support of that many people.”

Miller said he took an underdog mentality into his campaign, which began in late January, shortly after incumbent Sheriff Jerry Sauve announced he would not seek another term.

“I always ran like I was behind.” Miller explained. “We wanted to do do everything we could and put everything out there, whether going door-to-door ... to try to reach as many people as possible.”

Miller said the top issue when he talked to citizens is the drug problem. “It’s not only our community, but adjacent communities,” he said. “There’s a general concern for a lot of different areas. That was the No. 1 issue that we talked about the most because it affects everybody, whether it’s the family, people losing loved ones, deaths in the community. It’s something that we need to solve, not only as a law enforcement agency but as a community as a whole.”

Miller said he received a congratulatory phone call from Lesperance late Tuesday night. “We have a lot of the same things that we were focused on,” Miller said. “We have a great working relationship. I’m looking forward to hearing his ideas as well, things that he sees fit for the area as well.”

Lesperance, 51, Marinette, has been with the sheriff’s office since 2003 and a patrol lieutenant since 2017. He confirmed he congratulated Miller and he’s focused on the future.

“I still work there ... I ain’t going anywhere,” Lesperance said Wednesday morning. “We will work together and move forward. I will support him. He’s my sheriff and that’s the way it’s going to be.”

He said he has confidence in Miller’s ability.

Lesperance said it was difficult to express his thoughts after the crushing defeat.

“What a rush of emotions—high to low to the uncertainty,” he said. “It’s really a humbling experience because you have so many people come out to support you in one way or the other. There some relief because of course there’s a lot of pressure building up to this. It just didn’t work out in my favor, it’s still a relief. I tried. I had a lot of support. I’m very fortunate to have the network of my family and friends that I have. I wouldn’t change it for the world. Now it’s time to move forward. God has a plan for me and this is where I’m supposed to be.”

“You can always look back and say ‘I could have done more,’” he said. “I don’t like to second guess myself. I did what I did. I did what I thought was right and just came up short this time. That’s the way it’s going to go.”

As for his future, Lesperance said he will give his all to his current job.

“I will continue working for the sheriff’s office,” he said, “doing what I do and serving the community.”

Meanwhile, Miller said Sauve told both men he is ready to work with the winner as the victor transitions into the role of sheriff.

Both women work in the Clerk of Court office. They both ran as Republicans and there are no Democrats vying for the position. Dudka is not seeking another term.

NIAGARA—A suspect who fled from his home has been apprehended and is in custody, according to Niagara Police Chief Angela Moreau.

Joshua Otto, 43, is currently being held at the Marinette County Jail on charges of sexual assault of a child, child enticement, felony bail jumping and resisting/obstructing law enforcement as well as felony and misdemeanor drug charges, according to a press release from the Niagara Police Department.

At approximately 2 p.m. Wednesday, Niagara police officers apprehended Otto on Don Chapman Road in the Town of Niagara. Information obtained during and since the execution of a search warrant on River Street in the City of Niagara on Monday led officers to Otto’s place of hiding, Moreau stated in the release.

Otto was located by an undercover officer and taken into custody without incident. The suspect was found in an abandoned cabin approximately one quarter of a mile from the rural town roadway, Moreau said. Additional charges may be filed in the coming days pending additional interviews and other investigative procedures yet to be completed. 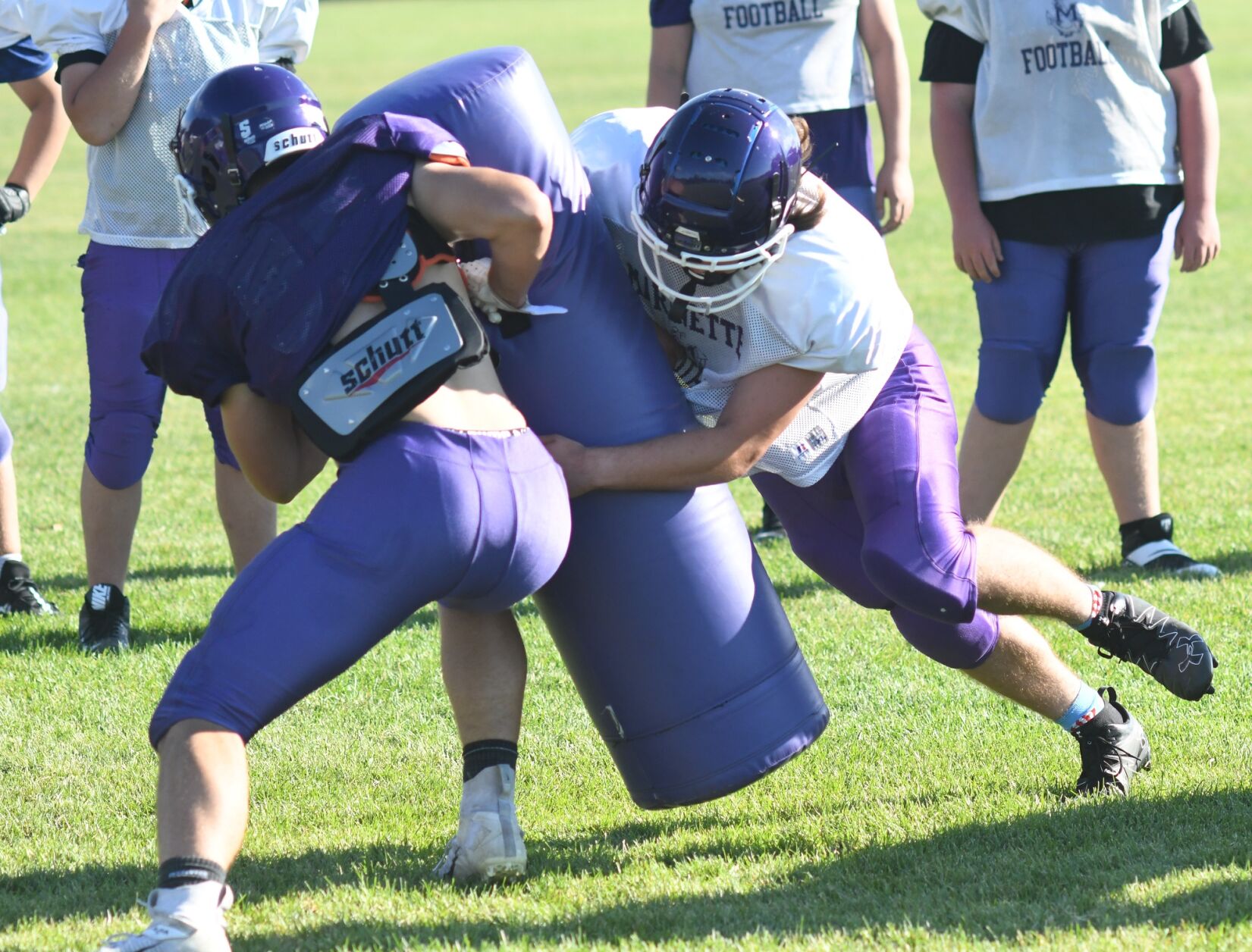 Marinette’s Jaxson Smith (right) practices his tackling form during practice on Wednesday. Football season is right around the corner, with Wisconsin schools already in their second week of practice. The Marines will kick off the season on Aug. 19 at Green Bay East.