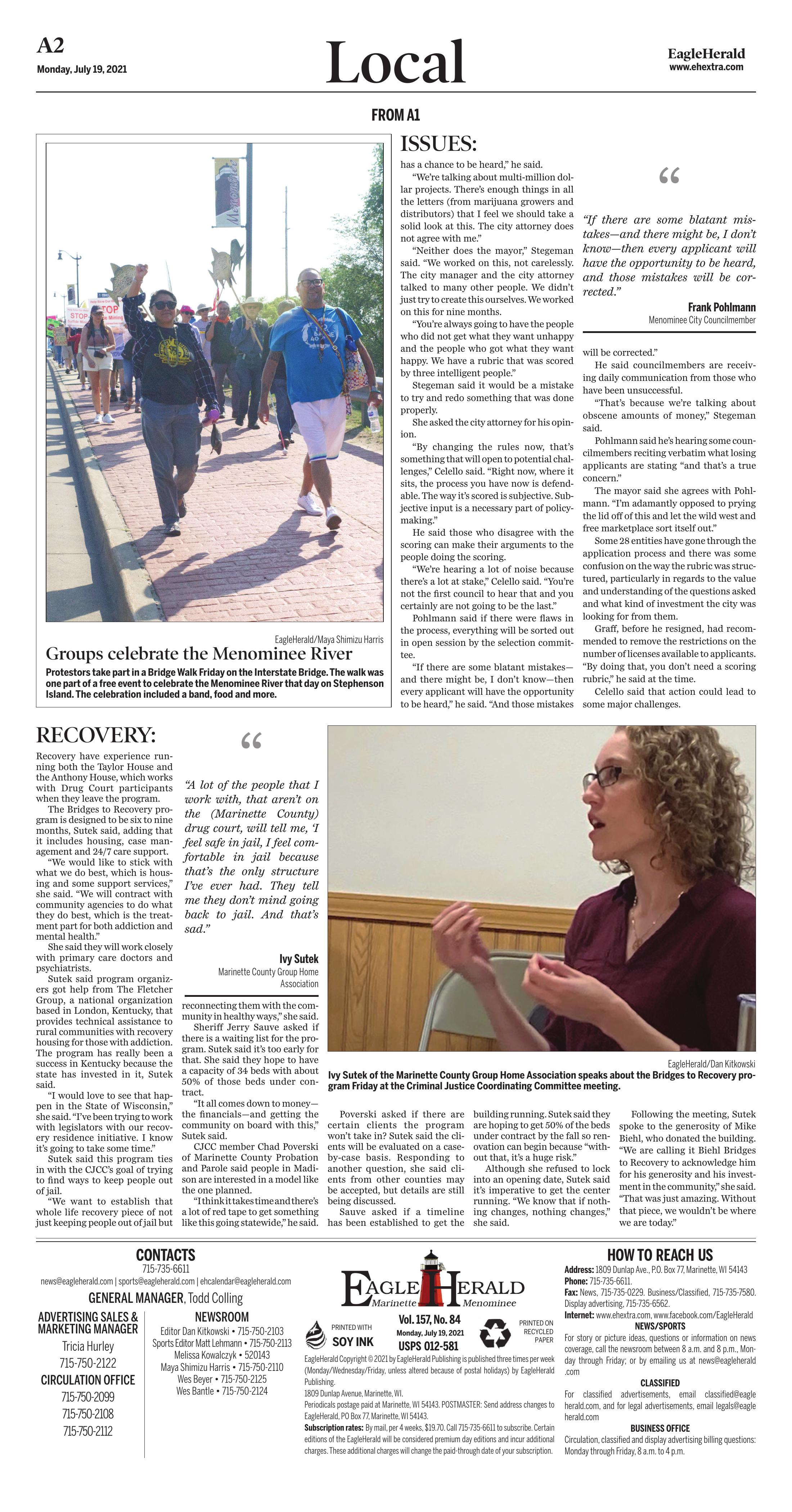 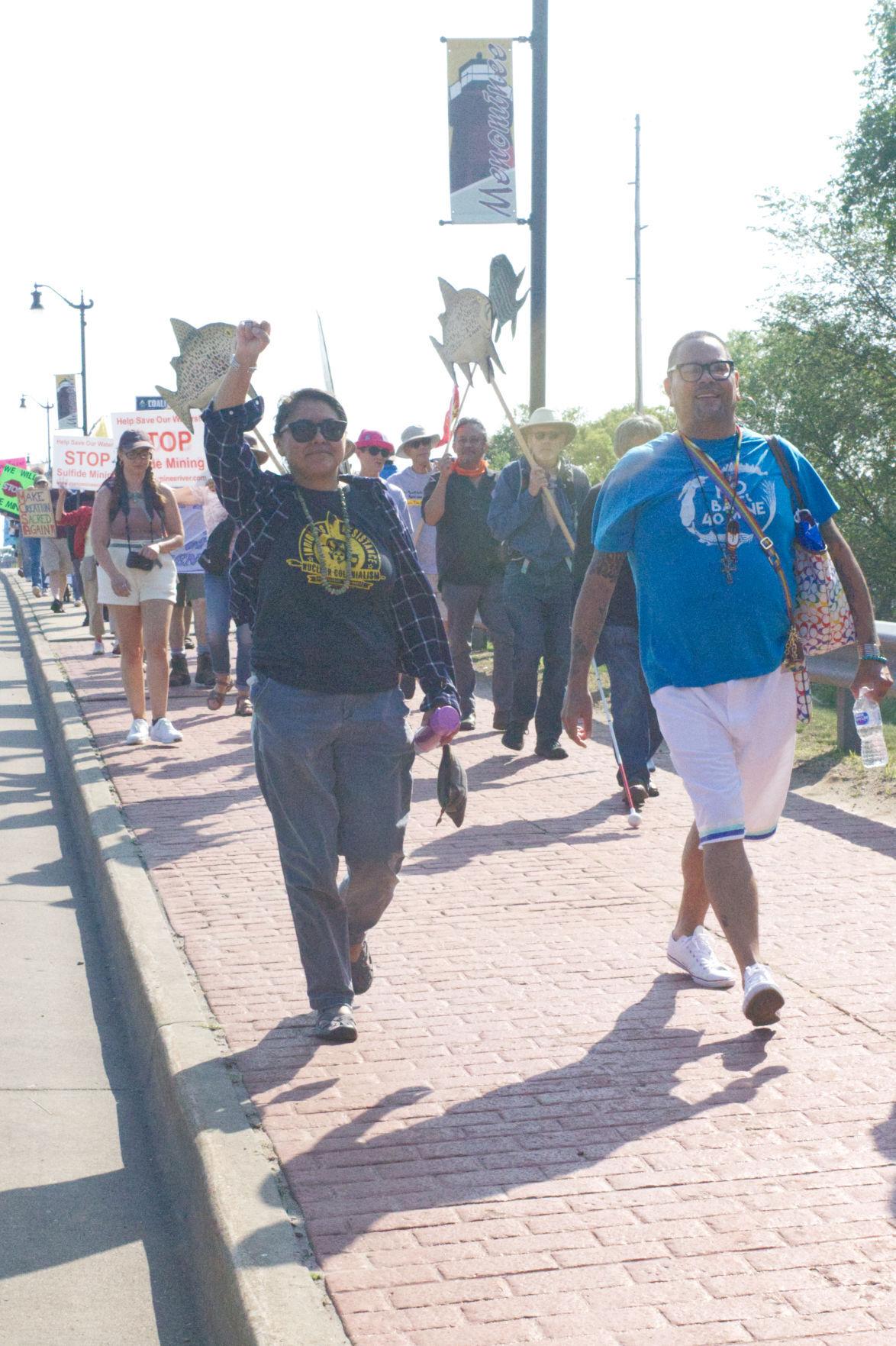 Protestors take part in a Bridge Walk Friday on the Interstate Bridge. The walk was one part of a free event to celebrate the Menominee River that day on Stephenson Island. The celebration included a band, food and more.

MARINETTE—A Marinette County counselor says some people are so stuck in their ways that the only safe structure they know is what they find inside the county jail.

“A lot of the people that I work with, that aren’t on the (Marinette County) drug court, will tell me, ‘I feel safe in jail, I feel comfortable in jail because that’s the only structure I’ve ever had,’” Ivy Sutek told the Marinette County Criminal Justice Coordinating Committee (CJCC) Friday morning. “They tell me they don’t mind going back to jail. And that’s sad.”

Sutek, a substance abuse counselor with the Libertas Treatment Center and a board member of the Marinette County Group Home Association, said people who think that way need some direction. She attended Friday’s meeting to inform the CJCC about the Group Hope Association’s Biehl Bridges to Recovery Center that will be opening in the future across from the old hospital at 3123 Shore Drive (the former North Reach building).

Marinette businessman and entrepreneur Mike Biehl donated the building to the association and it will be named in his honor.

“This program is designed to give those people a new structure ... get them pointed in the right direction,” Sutek said. “To prioritize their treatment first and their mental health first and then work into getting a job, re-establishing healthy relationship with their family members, getting visitation with their kids.”

Sutek, who has been a volunteer with the Group Home Association since 2017, said she started the Bridges to Recovery program and the idea came to her more than 10 years ago when she was a foster parent.

“I saw that cycle of family addiction, parents going to jail and not being able to take care of their kids,” she said. “Lots of broken hearts and lots of stress on the community to support these kids that were struggling.”

Sutek explained that after she got her degree and started working as a counselor, she noticed that people coming out of jail were not successful because of their lack of stable housing. She said many have no place to stay so they did “couch surfing” with people in their lives who are negative influences.

Sutek said those involved with Bridges to Recovery have experience running both the Taylor House and the Anthony House, which works with Drug Court participants when they leave the program.

The Bridges to Recovery program is designed to be six to nine months, Sutek said, adding that it includes housing, case management and 24/7 care support.

“We would like to stick with what we do best, which is housing and some support services,” she said. “We will contract with community agencies to do what they do best, which is the treatment part for both addiction and mental health.”

She said they will work closely with primary care doctors and psychiatrists.

Sutek said program organizers got help from The Fletcher Group, a national organization based in London, Kentucky, that provides technical assistance to rural communities with recovery housing for those with addiction. The program has really been a success in Kentucky because the state has invested in it, Sutek said.

“I would love to see that happen in the State of Wisconsin,” she said. “I’ve been trying to work with legislators with our recovery residence initiative. I know it’s going to take some time.”

Sutek said this program ties in with the CJCC’s goal of trying to find ways to keep people out of jail.

“We want to establish that whole life recovery piece of not just keeping people out of jail but reconnecting them with the community in healthy ways,” she said.

Sheriff Jerry Sauve asked if there is a waiting list for the program. Sutek said it’s too early for that. She said they hope to have a capacity of 34 beds with about 50% of those beds under contract.

“It all comes down to money—the financials—and getting the community on board with this,” Sutek said.

CJCC member Chad Poverski of Marinette County Probation and Parole said people in Madison are interested in a model like the one planned.

“I think it takes time and there’s a lot of red tape to get something like this going statewide,” he said.

Poverski asked if there are certain clients the program won’t take in? Sutek said the clients will be evaluated on a case-by-case basis. Responding to another question, she said clients from other counties may be accepted, but details are still being discussed.

Sauve asked if a timeline has been established to get the building running. Sutek said they are hoping to get 50% of the beds under contract by the fall so renovation can begin because “without that, it’s a huge risk.”

Following the meeting, Sutek spoke to the generosity of Mike Biehl, who donated the building. “We are calling it Biehl Bridges to Recovery to acknowledge him for his generosity and his investment in the community,” she said. “That was just amazing. Without that piece, we wouldn’t be where we are today.”

The committee Thursday dealt with the first issue, that of finding an interim city manager, who will be directly responsible for the second issue—that of choosing a member of the Marihuana Establishments and Selection Committee.

Regarding the interim city manager, Councilmember and committee chairman Bill Plemel said that Police Chief Brett Botbyl has previously shown interest in the position. He suggested that the chief might be interested in the interim post.

Councilmember Frank Pohlmann made a motion to have Mayor Jean Stegeman meet with Botbyl and gauge his interest in the job. Former City Manager Tony Graff resigned July 6.

Once an interim city manager is chosen, it will be up to that person to choose a member of the marijuana selection committee.

The JL/PL Committee decided last month to recommend the city council appoint a new marijuana establishment selection committee and score the existing applications using the current ordinance and rubric, and conduct their deliberations in public meetings. The council will meet tonight.

Stegeman asked if the fire chief (Mark Petersen) could join the police chief (Botbyl) and the city engineer (Tricia Alwin) on the selection panel. She explained that all members of the committee must hold administrative positions.

City Attorney Mike Celello agreed with Pohlmann in that the interim city manager should appoint the third member of the selection committee, as stated in an ordinance.

Plemel said that all members of the council are receiving constant information from entities hoping to land marijuana licenses in Menominee. “I just think that sooner or later that we’re going to have to have a committee of the whole meeting on this thing so that everybody has a chance to be heard,” he said.

“We’re talking about multi-million dollar projects. There’s enough things in all the letters (from marijuana growers and distributors) that I feel we should take a solid look at this. The city attorney does not agree with me.”

“Neither does the mayor,” Stegeman said. “We worked on this, not carelessly. The city manager and the city attorney talked to many other people. We didn’t just try to create this ourselves. We worked on this for nine months.

Stegeman said it would be a mistake to try and redo something that was done properly.

She asked the city attorney for his opinion.

“By changing the rules now, that’s something that will open to potential challenges,” Celello said. “Right now, where it sits, the process you have now is defendable. The way it’s scored is subjective. Subjective input is a necessary part of policymaking.”

He said those who disagree with the scoring can make their arguments to the people doing the scoring.

“We’re hearing a lot of noise because there’s a lot at stake,” Celello said. “You’re not the first council to hear that and you certainly are not going to be the last.”

Pohlmann said if there were flaws in the process, everything will be sorted out in open session by the selection committee.

“If there are some blatant mistakes—and there might be, I don’t know—then every applicant will have the opportunity to be heard,” he said. “And those mistakes will be corrected.”

He said councilmembers are receiving daily communication from those who have been unsuccessful.

The mayor said she agrees with Pohlmann. “I’m adamantly opposed to prying the lid off of this and let the wild west and free marketplace sort itself out.”

Some 28 entities have gone through the application process and there was some confusion on the way the rubric was structured, particularly in regards to the value and understanding of the questions asked and what kind of investment the city was looking for from them.

Graff, before he resigned, had recommended to remove the restrictions on the number of licenses available to applicants. “By doing that, you don’t need a scoring rubric,” he said at the time.

Celello said that action could lead to some major challenges.