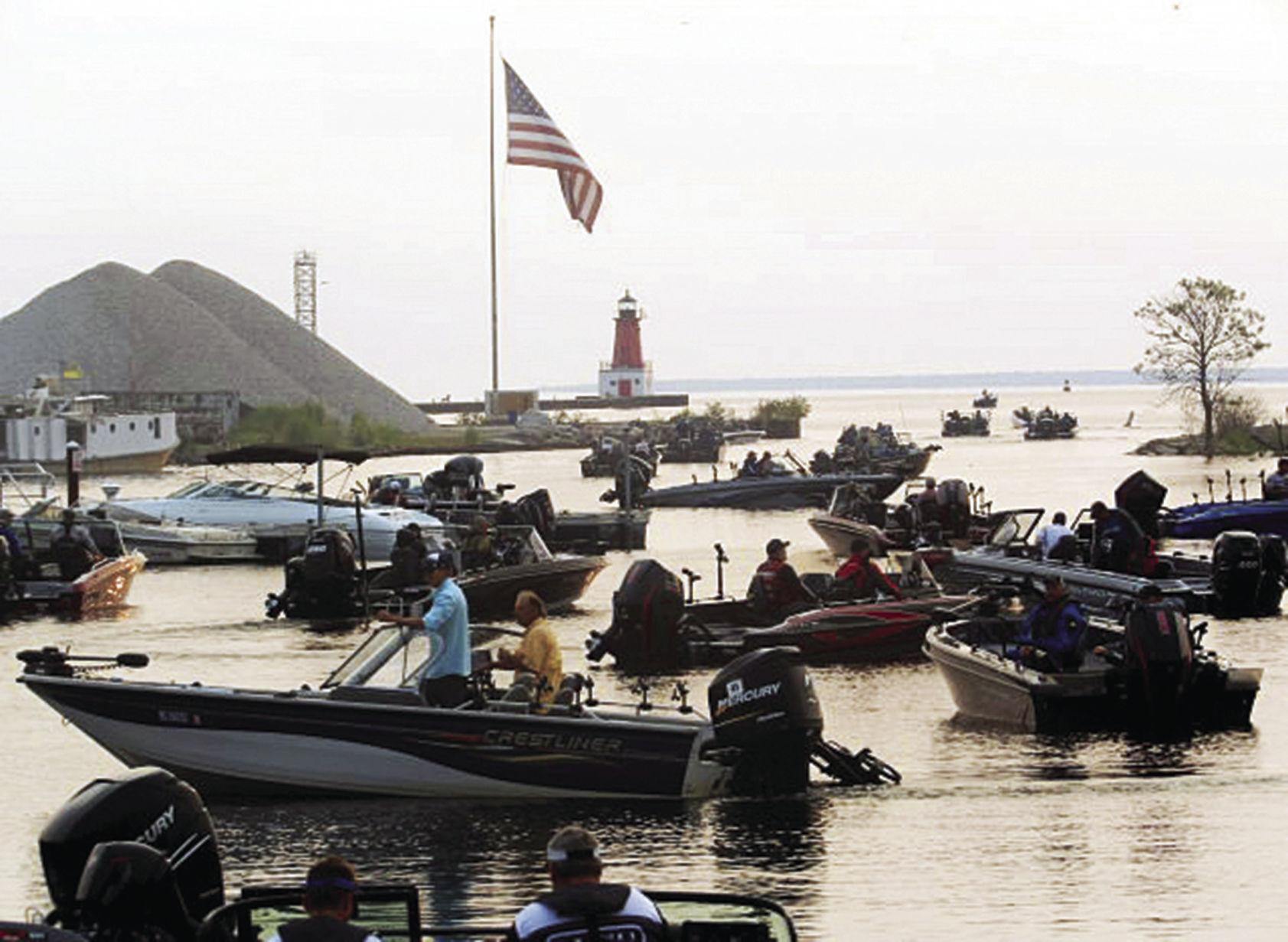 Menekaunee Harbor in Marinette was packed like a can of sardines Sunday morning. Boatloads of fishermen gathered for the start of the Berkley Open Walleye Tournament on Green Bay. The top prize was as high as $9,000 based on a 100 boat field.

Menominee County Prosecuting Attorney Jeffrey Rogg shaves his beard Thursday as part of a fundraising event for the Menominee Foster Closet. Rogg surpassed the goal of $1,000, raising $3,065 for the new chapter of the nonprofit.

Menominee County Prosecuting Attorney Jeffrey Rogg laughs with Melissa Ebsch, Bay Cities Radio News Director, and Billie Kimmell, Vice President of the Menominee Foster Closet, Thursday after shaving off his beard as part of the "Beard Challenge." The challenge was part of a fundraising event for the Menominee Foster Closet. Rogg surpassed the goal of $1,000, raising $3,065 for the new chapter of the nonprofit.

Menominee County Prosecuting Attorney Jeffrey Rogg has is beard partially shaved Thursday. Rogg agreed to have his beard shaved as part of a fundraising event for the Menominee Foster Closet. Rogg surpassed the goal of $1,000, raising $3,065 for the new chapter of the nonprofit.

MENOMINEE—In the fluorescent-lit basement of the United Methodist Church in Menominee, sitting around two conjoined plastic tables arranged with an assortment of large Domino’s pizzas, wax-coated paper plates and greased napkins, board members of the U.P. Foster Closet of Menominee joined Menominee County Prosecuting Attorney Jeffrey Rogg Thursday for his last supper as a bearded man.

Rogg had agreed to shave his beard—which he had been growing since the beginning of the pandemic-as part of a fundraiser for the volunteer—run Menominee Foster Closet, a branch of the U.P. Foster Closet nonprofit network that provides free clothing, diapers and other necessities for foster children and children living with non-biological parents in the Upper Peninsula. The Menominee Foster Closet is one of the network’s most recent branches.

Around 6 p.m., Rogg took a seat in a black pleather office chair and, after posing for photographs with Buyarski as she held a pair of yellow and black hedge clippers to his beard, allowed the board members to decorate him with headbands and sparkling pastel-colored clip-on ribbons as Lauren’s son Matthew began recording the livestream video. Shortly thereafter, Buyarski took the shears to Rogg’s beard. The “Beard Challenge,” which board members originally set for a goal of raising $1,000, ended with $3,065 of donations.

“The response has been overwhelming,” Rogg said. “I’m blown away by the generosity of people.”

Such community fundraisers are important for the ongoing operation of the Menominee Foster Closet, according to Lauren.

“We are based only on community support donations and volunteers, so we don’t have money coming in all the time,” she said. “These fundraisers and donation drives are the brunt of where we get funding.”

Lauren said that money from the community goes to the families that the Menominee Foster Closet serves but also helps with upkeep expenses such as insurance and tax filing fees.

If the numbers are any indication, the Menominee Foster Closet provides a much needed service to the local community. There were 172 and 120 foster children in Marinette and Menominee counties respectively between 2017 and 2019, according to the U.P. Foster Closet.

The former numbers don’t include children who are in the care of non-biological parents but aren’t part of the foster system. Lauren said that there are many grandparents in the area, for example, who are the caregivers of their grandchildren. She added that it can be difficult for such families to receive support because they aren’t always aware of the services that are available to them. Kimmell said that people often think the Menominee Foster Closet only supports foster families when it is actually open to any family consisting of children living with caregivers who aren’t their biological parents. The 89 families and a total of 136 youth that the Menominee Foster Closet has served over the past 7 months are a mixture of both.

In addition, guardians and the children they care for sometimes fall outside of legal recognition or aren’t tracked.

“The number of kids in foster care is so negligible compared to the overall picture of what we can’t track, such as guardianships,” Lauren said. “You also have handwritten notes from parents just having people agree to care for their kids while they’re incarcerated or while they’re homeless maybe. There are so many undocumented reasons and ways that this can be completed that we can’t keep track of.”

Lauren said that the Menominee Foster Closet helps such caregivers set up a delegation of parental authority, which gives guardians legal powers that help them care for children in the absence of their parents.

“You can bring this piece of paper with the kiddo to, say, the doctor or school, and get them set up for that stuff in lieu of the parent,” she said.

In addition to these obstacles, providing support to families in rural areas such as Menominee is uniquely challenging, according to Lauren.

“The services up here are significantly lacking in all regards,” she said.

She explained that, in regards to foster care, for example, agencies contracted to work with families through the Michigan Department of Health and Human Services have a high turnover rate. This is because most of them are located in larger counties and must travel long distances to meet with families throughout the Upper Peninsula.

“Because they’re traveling so much, they spend most of their day in the car and just don’t have a lot of time to actually meet with clients,” she said.

The lack of services makes the situation for foster parents and guardians more difficult as well.

Carrie Behrendt-Johnson, a foster parent of three children who lives in Marinette, said, for example, that there aren’t enough local trauma therapists to support the area’s foster families.

Behrendt-Johnson added that there is not much in the way of organized outings for foster families to help them build community. Menominee-based foster parent Juliane Freis also noted the lack of such local support and social groups aimed at foster families.

Although local services are not equal to those in larger cities, support is expanding. A Foster Closet branch opened last month in Oconto County, for instance, and Kimmell said the board is trying to raise awareness of the branch’s existence. And the Menominee Foster Closet has already helped fill some of the gaps in support for parents like Freis and Behrendt-Johnson.

“I don’t know what else I would have done,” said Freis. “Something as simple as formula is often expensive, so it’s been a tremendous help.”

Behrendt-Johnson said that her youngest son and teen-aged daughter arrived with little in the way of clothing or other possessions. She started using the Menominee Foster Closet shortly after it opened and said her experience has been positive.

“The Foster Closet is awesome,” she said.

OCONTO—Two victims of a Town of Lakewood residential fire have been identified.

The Oconto County Sheriff’s Office reports that David VanGheem, 78, and Sandra Van Gheem, 74, died in the July 8 fire in the 15000 block of Big Bear Lane.