Courtesy of Anuta Research Center The Wisconsin Land and Lumber Co., under the wing of founder Charles Julius Ludwig Meyer, a German immigrant, was the “Hardwood Capitol” of America in the 19th century. The building boom in the 1870s steered Meyer to the Hermansville area where he built a town and made a fortune doing it. Involved in various business interests, Meyer developed his own hardwood-cutting machines which proved instrumental in manufacturing hardwood flooring. 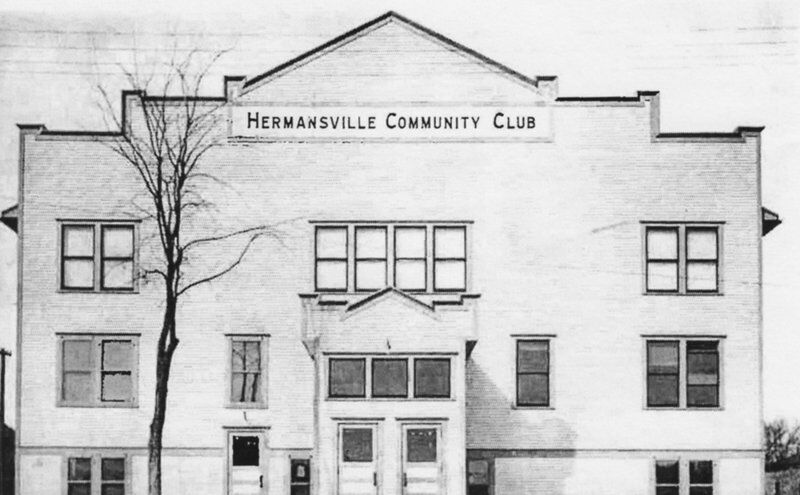 Courtesy of Anuta Research Center Not many small communities in Michigan can claim a Community Center like the folks in Hermansville have had for nearly 90 years. The all-purpose facility for community activities will host the 77th Gold Medal basketball tournament.

Courtesy of Anuta Research Center The Wisconsin Land and Lumber Co., under the wing of founder Charles Julius Ludwig Meyer, a German immigrant, was the “Hardwood Capitol” of America in the 19th century. The building boom in the 1870s steered Meyer to the Hermansville area where he built a town and made a fortune doing it. Involved in various business interests, Meyer developed his own hardwood-cutting machines which proved instrumental in manufacturing hardwood flooring.

Courtesy of Anuta Research Center Not many small communities in Michigan can claim a Community Center like the folks in Hermansville have had for nearly 90 years. The all-purpose facility for community activities will host the 77th Gold Medal basketball tournament.

When winter begins to fade, which means spring is just around the corner, we’ll see later sunsets and hopefully, more warmer weather as the calendar turns to March. The third month of a new year has become synonymous with the drama and hysteria of buzzer-beaters and upsets. Hundreds of stories, from heartbreak to joy, will be chronicled.

The age-old slogan touting the great sport of basketball is not only for high school boys and girls tournaments, and college athletes, but takes in the hundreds of contenders who are unattached from the high schoolers and collegians. These are the players who aren’t quite ready to hang up their socks and jocks and want to continue the thrill of competition.

Hermansville, a hamlet tucked in a hideaway off U.S. 2, is about to host its 77th Gold Medal tournament. Present-day lifestyles scream for slick-looking and spacious venues for sports entertainment, from basketball arenas and football stadiums to baseball fields. Not in this little town.

A small core of hard-working enthusiasts, from Hermansville to surrounding communities, have been drafting plans for the 77th event for months. Scorekeepers, timers, referees, ticket sellers, public address announcers, publicity hands and other important cogs have been lined up to run the show.

Athletes, from high-school age and the collegiate ranks to veterans in their 30s, 40s, and even 50s, will be lacing up their shoes to take the floor at their prescribed date and time. Some 40 teams in different brackets will be vying for an array of team and individual laurels.

The Hermansville Gold Medal has become close to being an annual writing routine for me, dating to 1955 when I was sports editor at the Menominee Herald-Leader. But my Gold Medal experience started before that when I  managed a couple of teams (Jozwiak’s Bar and Jozaitis Beer Distributing) when there were only Class A and Class B divisions.

There is no space for repetition when reviewing the history of the tournament. Each year at tournament time, a fresh new account would always surface to describe the fun and challenges at the Gold Medal which was the brainchild of Joe Rodman in the mid-1930s (Great Depression Era). After Joe’s death, his brother, Frank, ran the tournament for many years.

Although Frank still is involved in the event, Ray Bray of Norway has headed the tournament committee for 25 years.

Hermansville was once a thriving lumber town which began when Charles Julius Ludwig Meyer moved his sawmill at Fond du Lac, Wis., to this undeveloped territory in northern Menominee County. Mr. Meyer was affectionately called “Alphabet Meyer” because he insisted that his full name be used. Meyer and a brother started a mill making wheelbarrows, sash and doors in Fond du Lac. By 1870, the brothers had one of the largest sash and door factories in America. They kept expanding their operation and tinkered with machinery and stationary engines.

When the stands of white pine became scarce, Meyer learned of an abundance of white pine in the Hermansville area. The white pine supply was sufficient to feed his Wisconsin operation for about 10 years. The demand for sash and door increased during a building boom after the Chicago fire of 1871.

In buying up land in the Hermansville region, Meyer discovered large stands of hardwood as well as hemlock and cedar. He built his first sawmill in the village in 1878. The town received its name from Meyer’s younger son, Herman, who became the community’s first postmaster in December 1878. A township was organized on Feb. 27, 1890, and named “Meyer Township” in honor of the man who built it.

Meyer’s find of hardwood led to the development of a hardwood empire in Hermansville. Under the identity of Wisconsin Land and Lumber Co., the Meyer building boom surged.

When Meyer’s daughter, Emma, married Dr. George Earle, a physician from Tully, N.Y., the father-in-law convinced Dr. Earle to move to Hermansville. Dr. Earle invested heavily in Meyer’s widening business interests after learning his father-in-law was having financial troubles due to over-extending his operation.

In summary, Earle became principal owner of the company in 1900 after Meyer’s debts were erased. Earle passed the company on to his two sons, G. Harold and Stewart, who ran it until 1943. The story of the Meyer and Earle family tree is lengthy and would require a series of articles to describe it in detail.

Capitulation, however, was necessary in order to sum-up how tradition has survived in an old lumber town long after the noisy machines in sawmills fell silent.

One of the greatest civic achievements in Hermansville’s history was the construction of the “Community Club,” a landmark since its birth in 1926. The club happens to be the site of the Gold Medal tournament for nearly eight decades.

Six men — Harold Earle, Charles Radford, Tim Donovan, Henry Jensen, Cooper Taylor and Martin Bradley — summoned citizens in the community to plan a Fourth of July celebration. The holiday event was a smashing success, so good, in fact, that it led to the formation of the “Wide Awake Club.”

The club’s membership escalated, especially as World War I clouds were forming and patriotism was widespread. Later identified as the “Citizens Club,” the civic-minded group prepared to erect the Community Club in the spring of 1926.

Meyer Township lacked the funds to erect such a building, and the village of Hermansville hadn’t even been incorporated. The citizens took over. G. Harold Earle and Stewart E. Earle each bought one-quarter of the stock which amounted to $7,500 each, a handsome contribution during harsh economic times. Citizens ponied up $15,000, $7,500 of the donation coming from Mrs. George W. Earle.

Even before the building was completed, with no floor and no roof, citizens held a dance. The dance was a huge success and helped boost the coffers to pay off the debt. Jean Lacoursiere was hired as the club’s first manager.

The club had pool tables, a bowling alley, auditorium and other features that fit the age of time. Dances, music concerts, high school graduation rites and other social entertainment kept the doors to the club swinging. Ten years after the club opened, the Gold Medal tournament was introduced.

Meyer Township eventually assumed ownership when the Community Club encountered fiscal woes. The building has been extensively renovated over the years and its line of community service altered.

The history of the Hermansville Community Center rolls on. What more evidence is needed to demonstrate how a small and prideful community works to keep tradition alive.