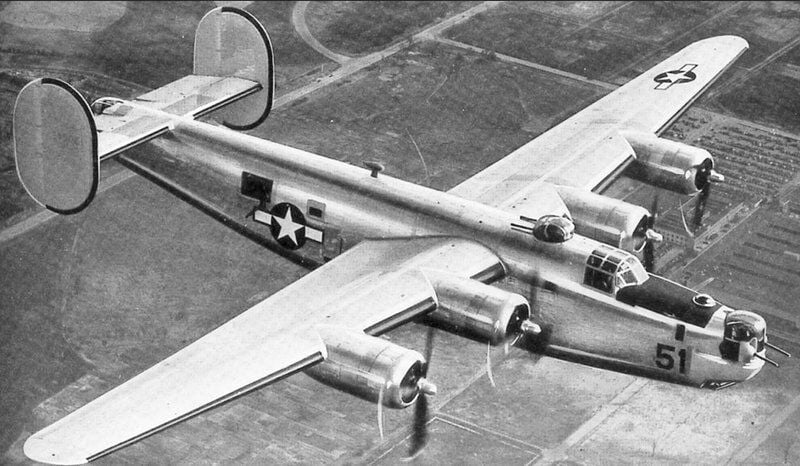 Courtesy of the Anuta Research Center The B-24 Liberator bomber was one of the most famous aircraft in WWII. Men and women workers, toiling around the clock seven days a week at the Menominee Lloyd plant, manufactured the canopy for the pilot house on the huge bombers. The canopies were then shipped to the Ford Motor Company’s massive aircraft plant in Willow Run, Mich. The skilled hands of Lloyd workers made several other important components for the military in the mightiest war in the history of mankind.

Courtesy of the Anuta Research Center The B-24 Liberator bomber was one of the most famous aircraft in WWII. Men and women workers, toiling around the clock seven days a week at the Menominee Lloyd plant, manufactured the canopy for the pilot house on the huge bombers. The canopies were then shipped to the Ford Motor Company’s massive aircraft plant in Willow Run, Mich. The skilled hands of Lloyd workers made several other important components for the military in the mightiest war in the history of mankind.

Such was the routine for the workforce at Lloyd Manufacturing Co. in Menominee in World War II. The company was the largest employer in the Twin Cities. Men made up a vast majority of the hired hands when the company was fashioning its remarkable line of products for the civilian market, but when WWII exploded Dec. 7, 1941, and males were needed to fight the war, women replaced them on the assembling lines.

This collection of local talent formed the mantra of a labor pool that was unmatched in the history of hometown industry. These workers were our grandfathers, great-grandfathers, fathers, mothers, brothers and sisters, aunts and uncles.

Their collective record of achievement in not only meeting, but exceeding the rigid challenges of producing war materials under stressful conditions, will forever be stockpiled in the annals of local industry. Sometimes fuzzy webbing blurs the memories during the growth of generations and it becomes time to remove the filament and retell their story.

What better time than now during the seventh decade anniversary of a world conflict that lasted four long and agonizing years. Americans were reminded of the stunning raid on Pearl Harbor 70 years ago in December. Within hours, the United States was engaged in war on two fronts — Japan in the Pacific and Germany and its allies in Europe.

The outlook was grim at the outset. An unsuspecting America, conceivably naive and for sure unprepared, faced insurmountable odds. But forged together with fierce patriotism and a relentless will to overcome adversity, these ancestors of ours marched onward. Millions of men and women served in the military, millions of others remained on the homefront to provide them with the weapons and supplies to fight the war.

Marshall B. Lloyd started his company in 1907. While it had established itself as a national figure in its line of specialties, the company was only 34 years old when the war detonated. The conversion from its core diction to war work forced a rugged assignment and put management and hirelings on a mission that would win acclaim from the federal government.

New machines and equipment were installed in the plant. Old workers and new ones had to be trained to run the machines that produced the goods. Office personnel needed to be retrained in handling the complicated records demanded by the government. Security surrounded the building. For 24 hours a day, seven days a week, the building lights and the machines never shut off. Employment climbed to more than 1,100, the highest at a single factory in the area.

Projectiles for .75 mm and three-inch shells were made for tanks and bombers. Heat treating at 1,600 degrees Fahrenheit, shot blasting to remove scale, finish turning the projectile, drilling and tapping, nose-threading and tap-ping, setting the proper calibre brand and inspection were some of the steps in the manufacturing process.

Making the “skeletons” of the huge troop-moving gliders was one of the better-known projects at Lloyd. The company supplied the tubular-steel fuselage frames to the Ford Motor Co. at its plant in Iron Mountain. The gliders were utilized mostly in the Mediterranean and European theaters of war. Welders were a key part of the process for the CG4A and CG13A model frames. The smaller model carried 15 fully-equipped troops, the larger model transported 30.

The Navy’s famous Helldiver plane, made by Curtiss-Wright, was one of the war’s more spectacular performers. The crew at Lloyd made the engine mounts. Imagine the high standards that went into making these engine mounts where there was no tolerance for error.

Many of present-day seniors were building toy models of the magnificent Liberator bomber that terrorized the enemy in the war. Well, the canopy that covered the pilot house was built at the Menominee factory. The bombers were completed at the gigantic Ford Willow Run plant in Detroit.

Sections were made on large motor-powered jigs at Lloyd, metal ribs and cross members were covered with an aluminum skin attached by hundreds of rivets before passing first company inspection and then government inspection.

A vast fleet of landing boats and tank barges were needed for the daring amphibious landings in the war. Many of these landing boats and tank barges were powered by Gray Marine Diesel Engines. Workers at Lloyd’s made the “breather tubes” for the engines. The company’s experience in forming steel tubing for furniture was a big plus for the assignment because each tube was tested under enormous pressure to assure steadfast performance.

Combat aid stations, field hospitals and military hospitals in the U.S. were equipped with the latest technology available in WWII. Thousands of GIs were wounded. Lloyd employees contributed to the care of the wounded by manufacturing dressing carriages for Army and Navy medical facilities.

The men and women who fight in war become fatigued and restless and the need for recreation and entertainment is crucial to ease their nerves. Recreation centers and movie theaters were an important part of that process. Much of the seating installed in the theaters and recreation centers were made at the Menominee factory.

There were many other factories in the M&M area that contributed immensely to the war effort. Some of them have been reviewed in previous columns. Some will be rehashed in future columns as a part of the seven-decades anniversary of a conflict that stretched from 1941 to 1945.

The diverse work performed at Lloyd Manufacturing Co. is a prelude of the colossal sampling of a talented workforce here in the Twin Cities.