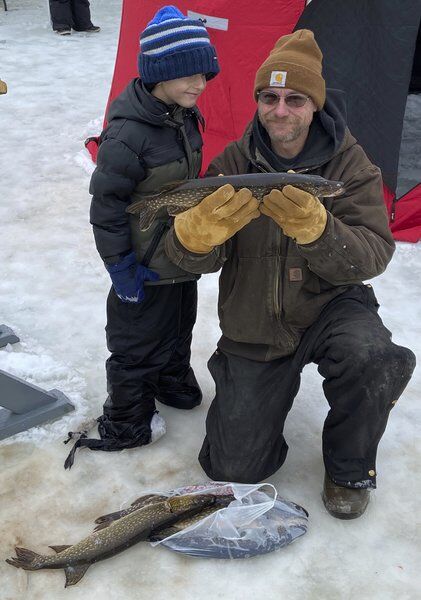 EagleHerald/Brian Bell (Left) Keaton Bero (left) poses as Tony Barley holds up one of the many fish Keaton caught and (Right) the Easter bunny is caught walking around the Kaltenbach Slough Slam last Saturday. 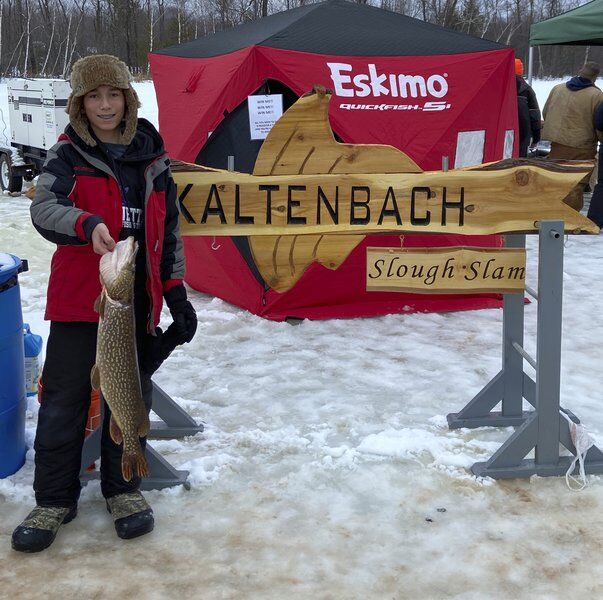 EagleHerald/Brian Bell (Left) Keaton Bero (left) poses as Tony Barley holds up one of the many fish Keaton caught and (Right) the Easter bunny is caught walking around the Kaltenbach Slough Slam last Saturday.

MENOMINEE — For the third straight year, anglers from all around gathered at Kaltenbach on the Menominee River for the annual Kaltenbach Slough Slam, and although attendance was slightly down from the year prior, the anglers had even more success.

Even in the balmy weather that made for a messy, slushy day on the ice, around 150 participants (down from 197 in 2019) packed the ice for the event and saw 277 total fish registered. The 259 northern that were registered easily topped last year’s total of 170. 11 perch, four crappie and three bluegill rounded out the total number of 277.

“It kind of just goes to show that no matter what the weather is this day can be successful,” Justin Tuma, the co-founder of the event said. “Last year (the temperature) got down to below 22 degrees and this year it was wet and sloppy — I think I went through eight pairs of socks — but we still had a pretty solid turnout and people caught a lot of fish. It was a great day out here and I really hope this event continues to gain traction in the community like it has the first three years.”

Of the 259 total northern’s caught, Braden Prange hauled in the biggest at 30-inches for the grand prize of $500.

“That’s the biggest fish I’ve ever caught,” Prange said. “It wasn’t easy to pull up, but once I got it out of the water it felt amazing.”

Fran Hubert brought in a 27-incher for second-place and $300, and Lance Hirte and Colten Dessart tied for third at 26-inches to split $150.

In the panfish category, Draven Sadler reeled in a 10.25-incher for the first-place prize of $500. Gabe Magnes came in second (10-inches) to take home $300 and Sadler tied with Brady Marsh in third place (9.25-inches).

In total, the Slough Slam gave away $2,750 in cash payouts and still had enough left over to deliver $1,500 checks to the Marinette, Menominee and Wausaukee High School fishing clubs. All fishing clubs were in attendance for the fishing tournament, but the Maroons and Marines had a mini-tournament between them and Wausaukee, with the Marines coming out victorious.

“We try to make this a family friendly event and it’s really nice to see so many families out here, having fun and talking and catching fish,” Tuma said. “It makes it even better at the end of the day that we can raise money to give to the area school fishing clubs. They need support like any other sport and it’s nice to able to help in any way we can.”

Other prizes that were given by some of the 70 total sponsors were an electric auger, a gas auger, an underwater camera, a cooler and much more.