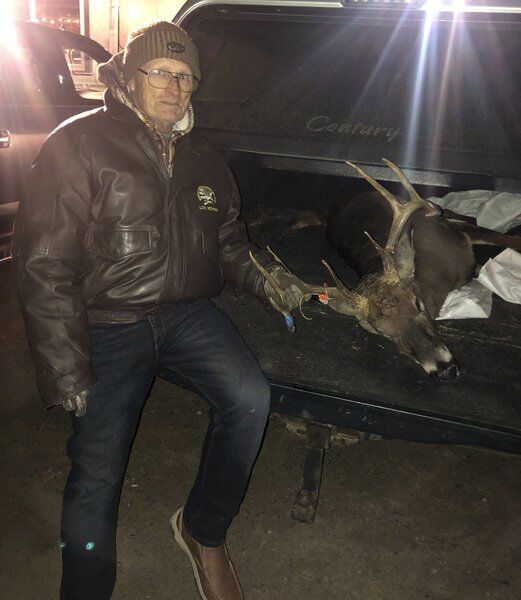 EagleHerald/Brian Bell John Wenick poses with his 10-pointer that finished third in the biggest buck category. 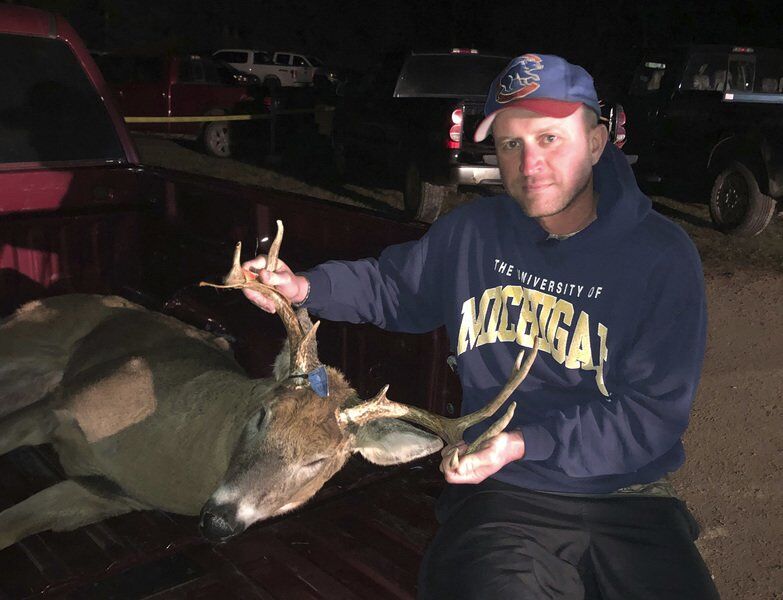 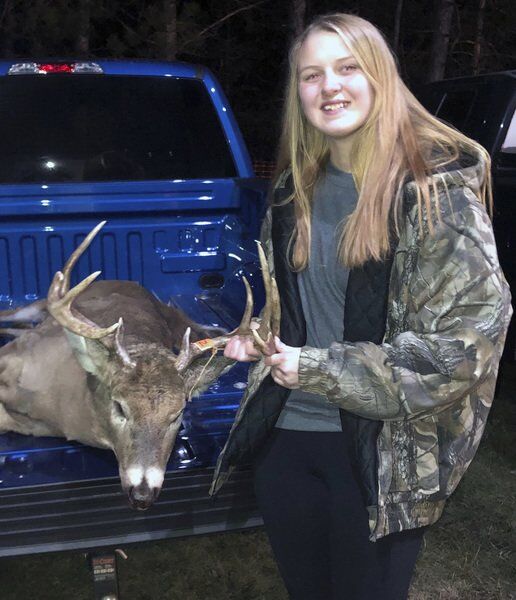 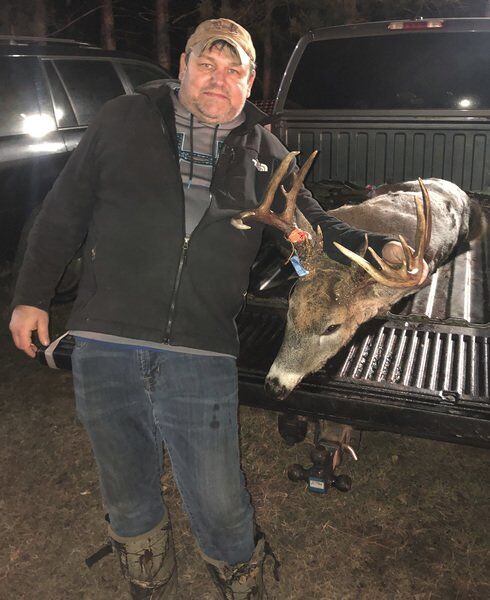 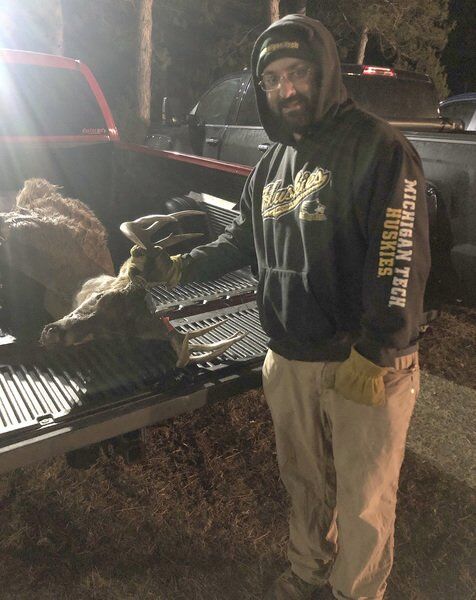 EagleHerald/Brian Bell Carney's Tyler Thiry took this 10-pointer on Saturday afternoon in what he called a 'fluke hunt.' 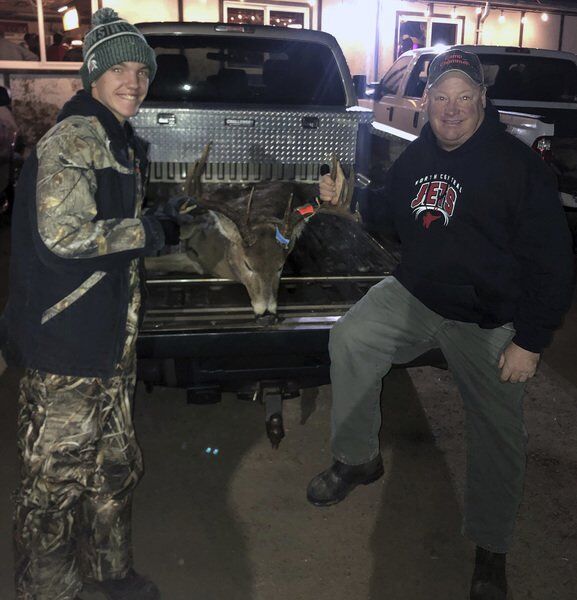 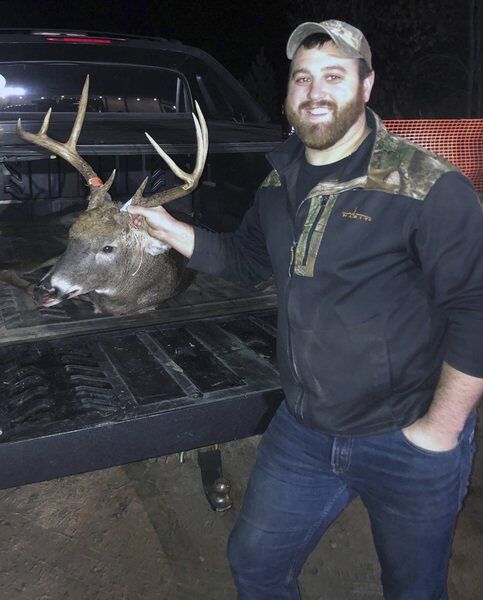 EagleHerald/Brian Bell John Wenick poses with his 10-pointer that finished third in the biggest buck category.

EagleHerald/Brian Bell Carney's Tyler Thiry took this 10-pointer on Saturday afternoon in what he called a 'fluke hunt.'

DAGGETT — For the third consecutive year, deer hunters of all ages and genders communed in the parking lot of Belgiumtown Restaurant to show off their own and see other people’s trophies, tell stories and take pictures at Monday’s 2019 edition of the Belgiumtown Big Buck Night.

43 deer were registered this year — up 10 from the year prior and over double from the inaugural year in 2017 — and 39 were bucks. Although it’s called ‘Big Buck Night’, hunters are welcome to bring in a doe as well for a chance to win the heaviest doe category which was split between Andy Plagenz of Manitowoc, Wis. and Troy Margelofsky of Dillon, Co., showing that the festivities aren’t just for local hunters. Plagenz went home with free deer processing from Gary’s Quality Foods and Margelofsky took home a deer supplement package courtesy of Buck Boss for their 109-pound deer.

“Another year, another success,” Big Buck Night organizer Dan Koller said. “The weather was perfect and it showed with how many deer we were able to register. It’s really starting to become a great community event.”

When she isn’t putting in work on the volleyball or basketball court, Stephenson’s Makayla Johnson likes to take her talents out to the woods where she dropped an 11-pointer at 7:30 a.m. opening morning (Nov. 15) to the East of Stephenson.

“I didn’t have any luck last year and this is the biggest deer I’ve shot, so it’s a pretty cool feeling,” she said. “He was chasing a doe and he stopped where I had a shot.”

Carney’s Steve Strahl has one of the better hunting stories from the first few days of season — and had the biggest buck to show for it as he won a whitetail shoulder mount from B&J Taxidermy.

Strahl shot the monster 11-pointer on Saturday around the Jam Dam area, and couldn’t really tell how big the deer was until after he shot it. All he knew was this was the one he wanted.

“I have a pretty narrow shooting lane where I hunt at — probably too narrow — but I saw some movement a ways away near a clump of trees so I got myself ready,” Strahl said. “Once I hit him and he dropped and his butt went into the air, that’s when I saw how big he really was and I got real excited.”

Boomer Wickstrom came in second in the biggest buck category to win an engrave hunting knife and a wildlife print from DLT Trading, and 75-year-old John Wenick was the oldest registered hunter and took home a sportsmen package from Stephenson Marketing Co-Op for his third-place finish.

While some hunters had tough shots, others had deer just walk right out in front of them and wait to be seen. Take Chad Lemery for example. On opening morning at 6:30 a.m., he was sitting in his blind East of Wallace when a nice 8-point walked no farther than 60-yards in front of him.

Another example of a hunter having a simple shot is Marinette’s Eric Neubert. “Neubs” as he is called by those who know him shot a 9-pointer on Sunday morning at 8:20 and said the deer walked out with a 6-pointer from the north and the choice between the two was pretty easy. “It was just a simple hunt.”

“It was the easiest deer I’ve ever shot,” Lemery said. “I have a 360-yard lane to shoot and he just walked out at around 60 yards and when I shot him he just dropped.”

The biggest youth buck went to Kienen Kuntze of Daggett who won a 410 shotgun from Menominee Co. Pheasant Club for his 8-point buck.

Mike Cronick of Bagley took home the award for the Judges’ Choice Category for taking down a giant 15-pointer at 3:30 p.m. on opening morning.

“I hadn’t really seen this guy around much but he came walking in from just off in the distance,” Cronick said. “I actually shot twice because I thought missed the first time but it turned out I hit him behind the right shoulder both times. He ran about 20 yards or so, dropped and I bagged my biggest buck so far.”

Tyler Thiry, who said this was a fluke year for him, bagged the heaviest buck — a 186-pound 10-pointer — to win a fish fry package from Belgiumtown.

“I had been seeing a couple smaller deer and then he just walked out,” Thiry said. “He ran about 35 yards after the shot and just went down.”

Koller would like to give a special thanks to Scott Thoney, Jesse Betters, Brad Warner, Jim Belec, Chad Betters, Wes Koller and Mike Linsmeier for helping to organize the event and make sure it ran as smooth as it did, and can’t wait to see what next year has in store for the 4th annual Belgiumtown Big Buck Night.