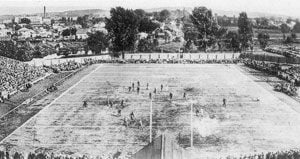 The Green Bay Packers played at the old City Stadium on the east side from 1925 to 1956. Hagemeister Park was the team’s first home field from 1919 to 1922. Bellevue Park served the club in 1923 and 1924. Expanded several times, the first City Stadium on the east side had a peak seating capacity of 24,500. The East River was just a pass away from the playing field. Courtesy of the Green Bay Packers 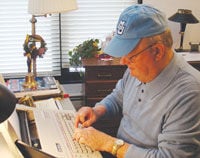 The Green Bay Packers played at the old City Stadium on the east side from 1925 to 1956. Hagemeister Park was the team’s first home field from 1919 to 1922. Bellevue Park served the club in 1923 and 1924. Expanded several times, the first City Stadium on the east side had a peak seating capacity of 24,500. The East River was just a pass away from the playing field. Courtesy of the Green Bay Packers

Now in their 90th season in an organized setting, the Green Bay Packers remain the most beloved professional football team for a vast majority of rooters. A mixture of other chosen teams in the NFL adds to the fun and razzing that excites the football faithful.

It's etched in history that the Packers began their journey on the gridiron in 1919 under the watchful eye of their founder and first coach, Earl "Curly" Lambeau. History also tells us that a collection of Menominee players first engaged the newly formed Green Bay team. The date was Sept. 14, 1919, and Green Bay easily disposed of the Menominee team 53-0.

Despite the lopsided defeat, Menominee clings to its fame of having been the first to test Lambeau's lineup. The following week, Sept. 21, the Marinette Northerners bowed to the Packers 61-0. Still, the distinction of being the first two opponents of the now-famous NFL franchise lies in the Twin Cities.

In 1921, Green Bay became a part of the American Professional Football Association which became the National Football League in 1922.

Menominee and Marinette continued to play an independent schedule after Green Bay went on to bigger and better things. Some of the local players were paid to bring their talents to the field which put the Twin City teams in the semi-pro category.

A couple of local products, however, were good enough to make the initial Green Bay roster in the American Professional Association and later when the league changed its nameplate to the NFL.

Richard "Jab" Murray, a tackle, and Buff Wagner, a halfback, were charter members of Green Bay's 1921. outfit. It was Wagner who caught the first forward pass in Packer annals. The Marinette star pulled in an 18-yarder from none other than Curly Lambeau to help the Bays defeat Minneapolis 7-6 in the Oct. 23, 1921, opener.

Another Marinette standout, Sammy Powers, played right guard in the first Green Bay game. Although he didn't play in the initial contest, halfback Eddie Glick of Marinette was a member of the team. Center Wally Niemann of Menominee joined the team for the 1922 season.

The Packers and the M&M connection is steeped in lore. Area fans have a locker room of favorite stories to tell about their thrills and experiences with the Packers. The tradition is passed from one generation to the next.

I've had my own personal fancies with the team, from my first game in 1944 to writing about the organization as a newsman. The tick of time may seem frivolous to some folks, but skeptics need to understand that personal experiences are more pivotal than an important game with national attention.

A fan since grade school, my first trip to see the team in action at old City Stadium in 1944 ranks No. 1. My buddy, Dick Michaels, and I boarded the "Peninsula 400" and walked from the Green Bay train station to the storied stadium on the far east side. It was quite a hike. After the game, we walked back to the depot for the return trip. Green Bay defeated a combined team of the Chicago Cardinals-Pittsburgh Steelers 34-7. The rosters of the opponents were merged due to a shortage of players in World War II.

Taking sons, Mike and Steve, to their first games remains special. Mike watched Green Bay and Detroit battle to a 17-17 draw in the season opener in 1967. Steve's entrance was made on a cold Dec. 21 afternoon when the Packers spilled the Atlanta Falcons 21-13. Both were grade-schoolers when they witnessed their first games. Now they have season tickets, Mike coming from Indiana for the experience.

Seeing Green Bay nudge Dallas 21-17 in the famous "Ice Bowl" played on Dec. 31, 1967, for the NFL title. The temperature was 13 below zero with a wind chill of minus 46. Francis Grun, Frank "Bucky" Schick and George Mayville were my companions.

My wife and I watched classmate and friend Dick Deschaine put on a dazzling punting show as the Packers upset the Bears 21-17 in the City Stadium (now Lambeau Field) dedication game on Sept. 29, 1967.

Four inches of snow fall, the field is slippery and muddy, but the Packers throttle Jimmy Brown and the Cleveland Browns for the NFL crown. The game was played Jan. 2, 1966.

Green Bay nips Minnesota 26-20 in overtime in a Monday night contest. Antonio Freeman makes a mirculous catch while on the ground, then leaps up and runs for the winning touchdown in a rain storm.

The listings are my most memorable games involving the Packers. There are no more trips to Green Bay to watch the action, but the thrills continue. A 50-yard seat in front of television isn't a bad ticket. It's time for the second and third generation to record their favorites.