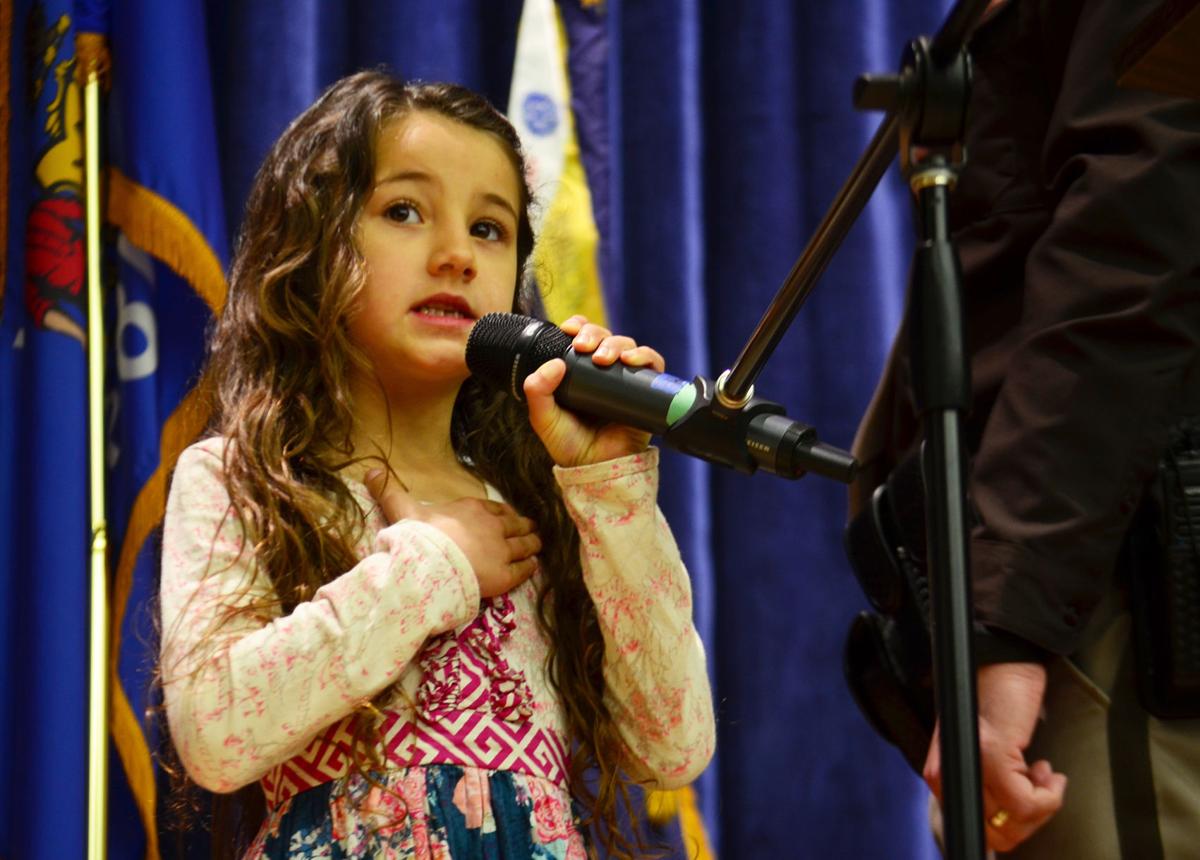 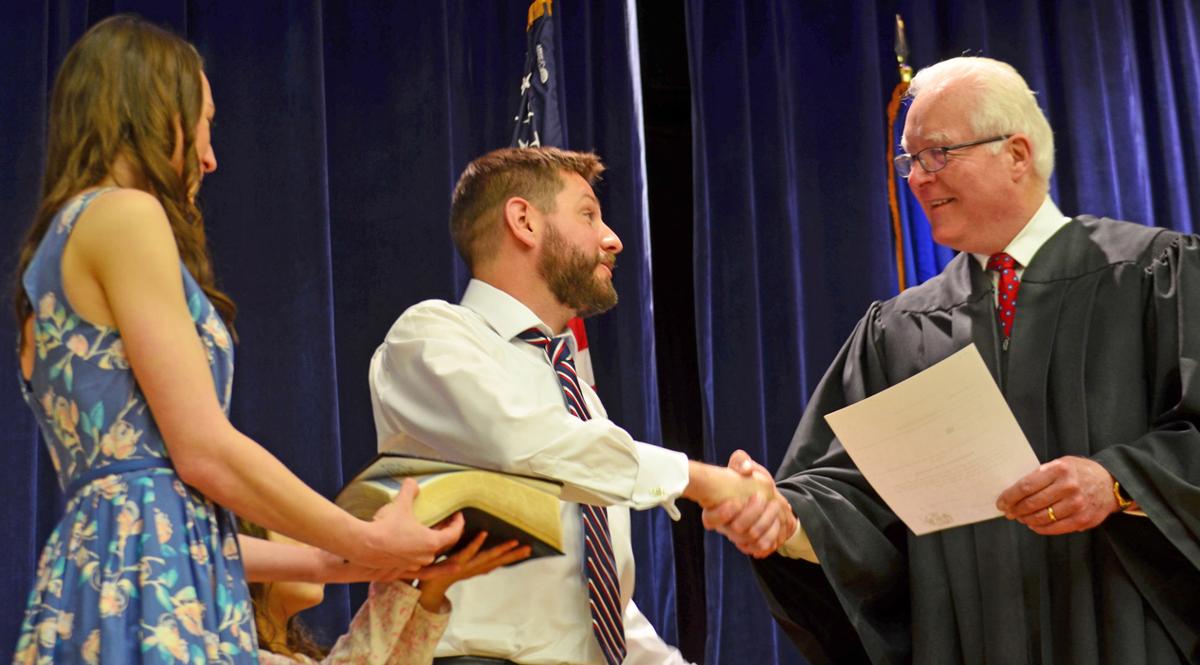 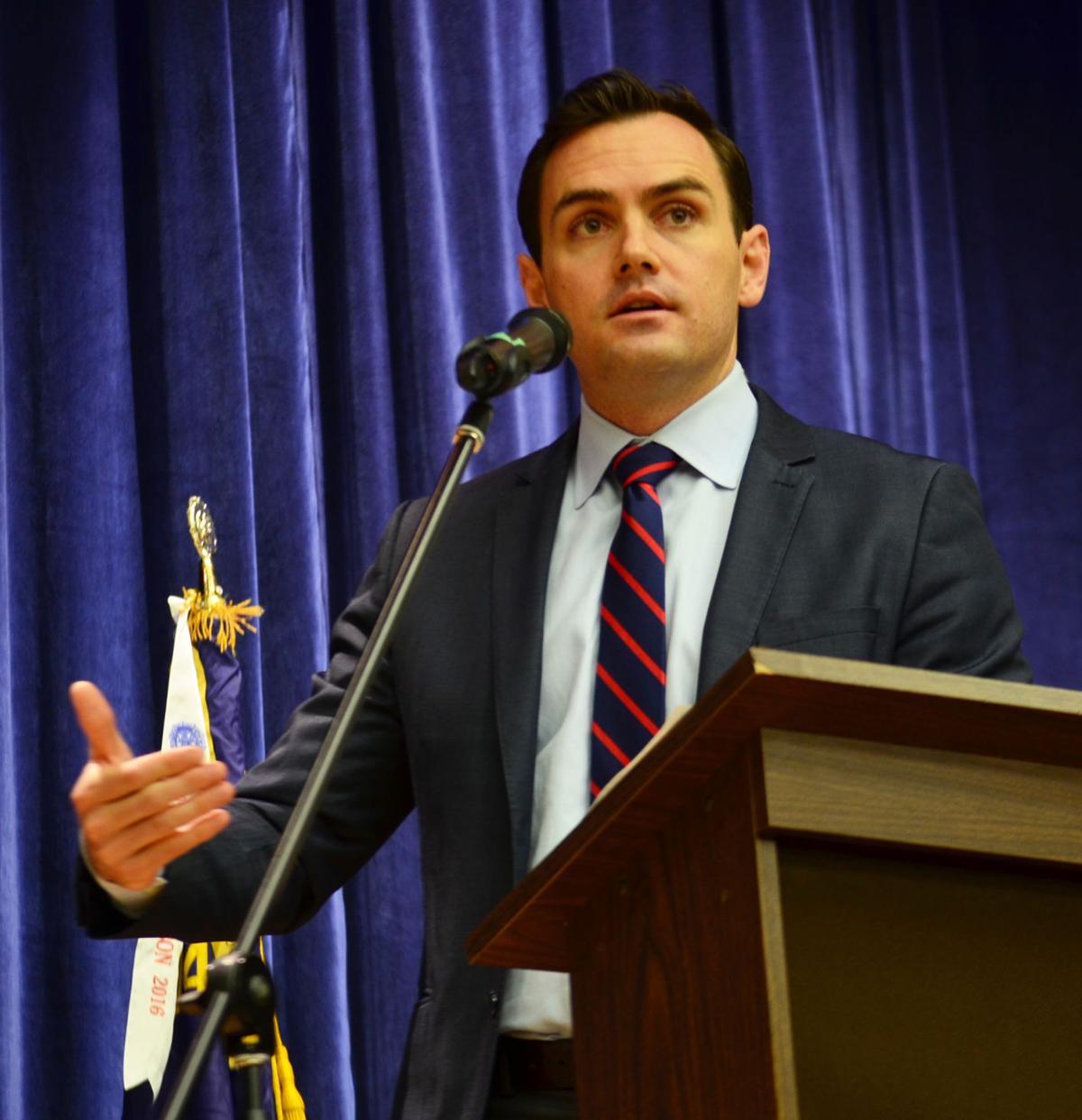 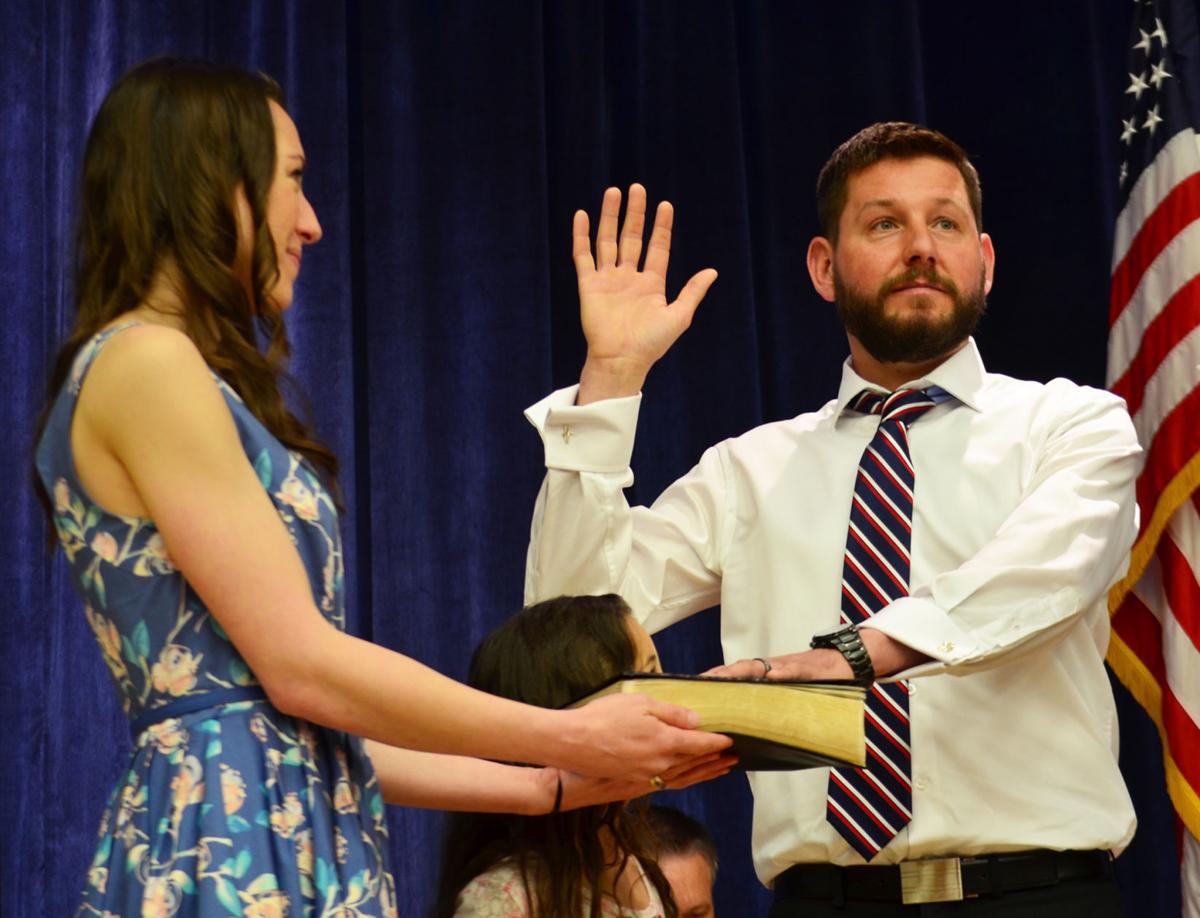 OCONTO—Inside the Oconto High School auditorium, the distance from mid-way down the rows of seating to the stage spans less than a stone’s throw and likely requires less energy than the average person expends taking one sip of his morning coffee.

In an allegorical way, for the newly-elected representative of the 89th District Elijah Behnke, R-Oconto, that distance represents an almost unimaginable space.

But the allegory stopped there, and it stopped on Wednesday inside the auditorium of his alma mater, with the swearing-in ceremony that officially declared Behnke a member of the 105th Wisconsin Legislature, as a member of the Assembly.

Traversing that space required the one thing that the people who know him best never really doubted he possessed, the exceptional energy of a person driven by purpose, passion and ideas.

“I saw his heart, I felt his heart,” said Oconto County Sheriff Todd Skarban. “And his drive and determination to step up and do it for the right reasons. There is no malicious intent, there is no chip on the shoulder, it’s all about our community; and it’s about making good bipartisan legislation that everyone can effectively live with and enhance and support: Whether it is clean water, whether it is drug-endangered children, (or) whether it is getting our kids back to school during a pandemic. Those are the things that we are going to be tasked with moving forward and I think we have the right man here to lead that charge.”

The culmination of Behnke’s story, at least part of it, occurred yesterday as Oconto County Circuit Court Judge, the honorable Michael Judge, administered the oath of office to Behnke. Behnke defeated Democrat Karl Jaeger in the spring election taking 8,129 votes (63%) to Jaeger’s 4,732 votes (37%). Behnke now occupies the seat from which former Rep. John Nygren, a republican from Marinette, resigned in December.

And when queried by the EagleHerald about that journey from auditorium chair to auditorium stage—from Oconto High School student to a seat inside the big white building in downtown Madison, Behnke put a lot of credence into the importance of that journey. He particularly underscored roles played and values imbued by his hometown and the school from whence he took those first few steps of along the journey.

“It’s surreal,” he said. “Some of the foundations of the character of who I am today were built in my four years (at Oconto High School) … my character was sharpened in high school and that foundation built up to this victory.”

However, even as a high school wrestler or when sitting in math class, Behnke admitted that “not in a million years” did he ever imagine he might be standing up here representing some of the same people he grew up with at the state capitol.

“This has been an amazing, amazing opportunity to meet great people in the district,” he said from stage during the ceremony. “To learn about the issues and learn what people care about and are concerned about. Because that is the job—you are the representation … I now get to be that representation … and serve the people.”

THE RIGHT MAN FOR THE JOB

And based on the journey that Behnke made to reach this point, Skarban feels that Behnke represents the right man to serve the people. As the Master of Ceremonies for Wednesday’s event, Skarban recounted the intuition he felt when Behnke decided to run for office.

“(Oconto Unified School District) is a community with high expectations and high academic achievement, where tradition meats excellence,” Skarban said. “It provides a foundation of lifelong learning where all students can meet their highest potential and become positive contributors to society …”

Skarban then gestured toward Behnke.

“I think that is what we are looking at today,” the sheriff said. “It comes down to the work itself, when you get engaged and you get involved with the community, it is eternal optimism. The people you talk to on the streets, they know who their leaders are in the community, they look to their leaders … and they want the people to step up and become these leaders and that is what we have today, in (Behnke).”

The United States Constitution, a document that has sustained and guided the nation for over 230 years begins with those three words, words to which U.S. Rep. Mike Gallagher alluded when speaking of Behnke’s decision to run for office. Gallagher also attended the ceremony.

“At the heart of our system of government is the basic concept of the ‘citizen legislator,’” Gallagher said. “Anytime you have someone of (Behnke’s) character willing to step up and serve (his) community, (his) state and his country—somebody who really represents that model of the citizen legislator—it is a remarkable thing, a thing worth celebrating.”

He acknowledged, that a lot a big problems need addressing, from clean water, to dugs, to unemployment and that often, those issues can grow so perplexing and cumbersome that it makes some people feel like just throwing up their hands and saying “it is not my problem.”

“(For people like Behnke) who are willing to run to those problems and try to fix them, that is a very difficult thing to do … to put yourself and reputation and name on the line,” Gallagher said.

Ask anyone in attendance at Wednesday’s swearing-in ceremony, about the qualities of character that moved them to vote for Behnke and their response would likely include one—perhaps both—of two traits that go hand-in-hand: hard work and endless energy.

Indeed, during the campaign, Behnke knocked on over 5,000 doors engaging in face-to-face interactions with people who were, at the time, potential constituents. And close to a thousand of those doors resided right here in the City of Marinette. And often, in the midst of the campaign season, during the months of January, that meant lacing up the snow boots, wrapping up in several layers and braving the sub-zero winds shifting off from the frozen waters of the bay. Moreover, he admitted in a goodhearted way that his wife, Ashely would not let him spend more than $5,000 on the campaign. So, bottom line, it took a lot of foot and knuckle work reaching all those doors that the faces behind them.

“Knocking on doors was the most frugal way in running for office, and it got me through,” he said.

And at one point, even the former occupant of the Assembly seat for which Behnke aspired, Marinette and former Representative Nygren, received a knock at the door from Behnke’s campaign.

Gallagher, who spoke during the ceremony, emphasized Behnke’s willingness to work hard and his fearlessness in taking to the pavement during that successful door-to-door campaign.

And that takes hard work, fueled by a passion, which Gallagher illustrated comes in endless supply with Behnke.

“In campaigning a little bit with (Behnke), I was exhausted after an hour of just spending time with him,” Gallagher said. “He just worked hard … he knew he had to earn this, he didn’t take anything for granted … he had to earn the trust of the people of this district.”

Peter Dorn agreed. Dorn serves as pastor at the Oconto Gospel Chapel and has known Behnke for about five years. Following the ceremony, he described the spark behind Behnke’s drive.

“I think first off, his faith drives him,” Dorn said. “But he is also a very enthusiastic and high-energy guy. He runs our … children’s group (at the church) and he is there to preach when I can’t. So he is a big asset to our church.”

ASSETS OF FAMILY THE COMMON MAN

In the end, Behnke identified his most important assets, family and friends. He credited his parents for raising him right, his loving wife, Ashley and daughter Ayla and his good friends who lent their energies to help him campaign.

Perhaps those strong networks of community support from his youth at Oconto High School to his present family life as a husband, a father, a part-time farmer, and independent business owner—and now a representative and leader—instilled in him the qualities that he believes makes him right for the job, while at the same time hinting at potential future political goals.

“When I run again, I want to knock on another 5,000 doors,” Behnke said. “To show people that I haven’t changed … Discernment, honesty and integrity, those are the character qualities that I bring to Madison to do a good job.”

He admits that as his first time running for office, he feels naïve. That fact, he thinks, might be the source of challenges for him when he starts to dig in at the State Capitol. Behnke said his campaign evolved on pennies, powered by a grassroots commitment and a team that worked for free.

“They won’t take money because they want to see good people in office, which is humbling,” he said. “I hope to accomplish something and to actually leave a mark. That is a burden that I am honored to have because I hope to do something for this part of the state that changes lives for the better.”