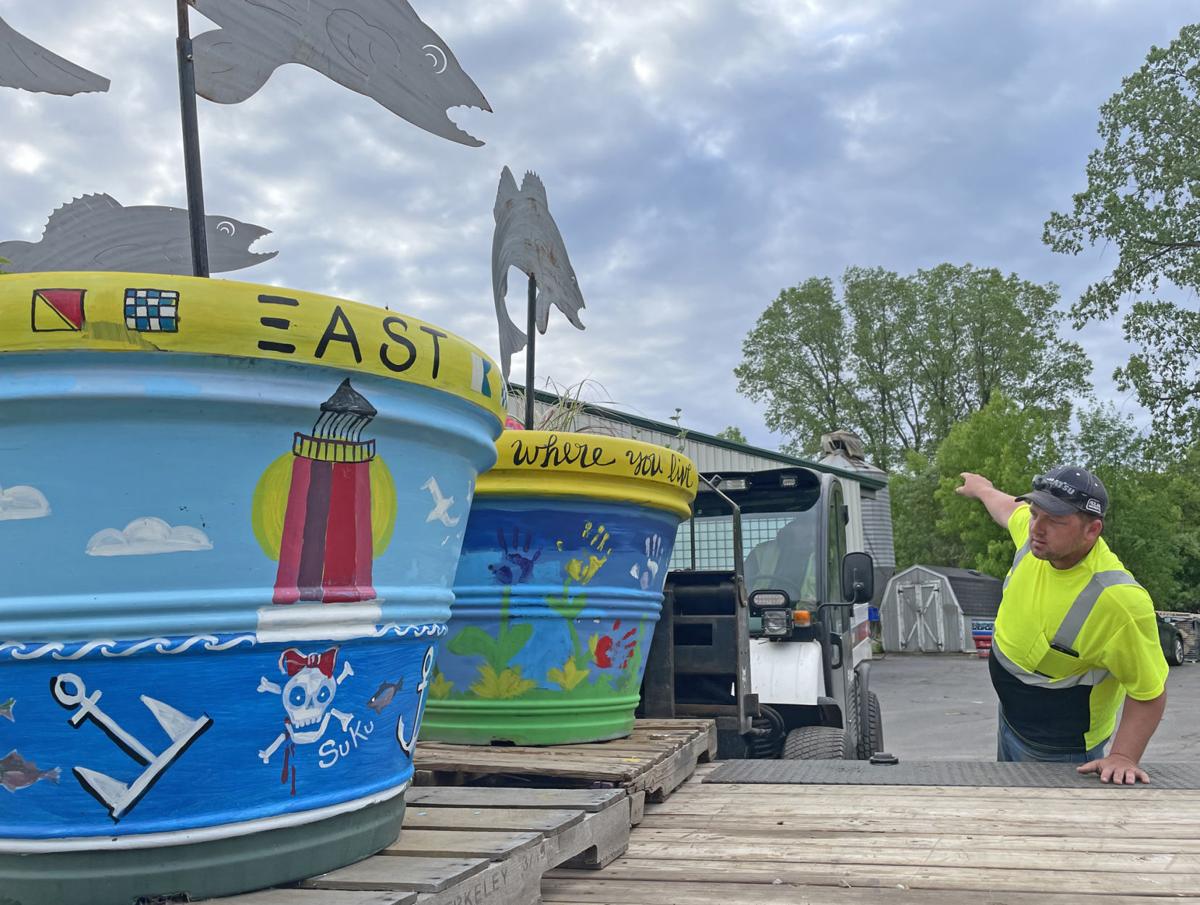 City of Marinette Public Works employee Jed Buechler directs his coworker Chris Luitze (inside the forklift) as the two of them spend the early hours of Thursday morning loading some heavy public art pieces onto the bed of a trailer. They spent the next few hours placing the elaborate planters for public viewing along Marinette Avenue medians. 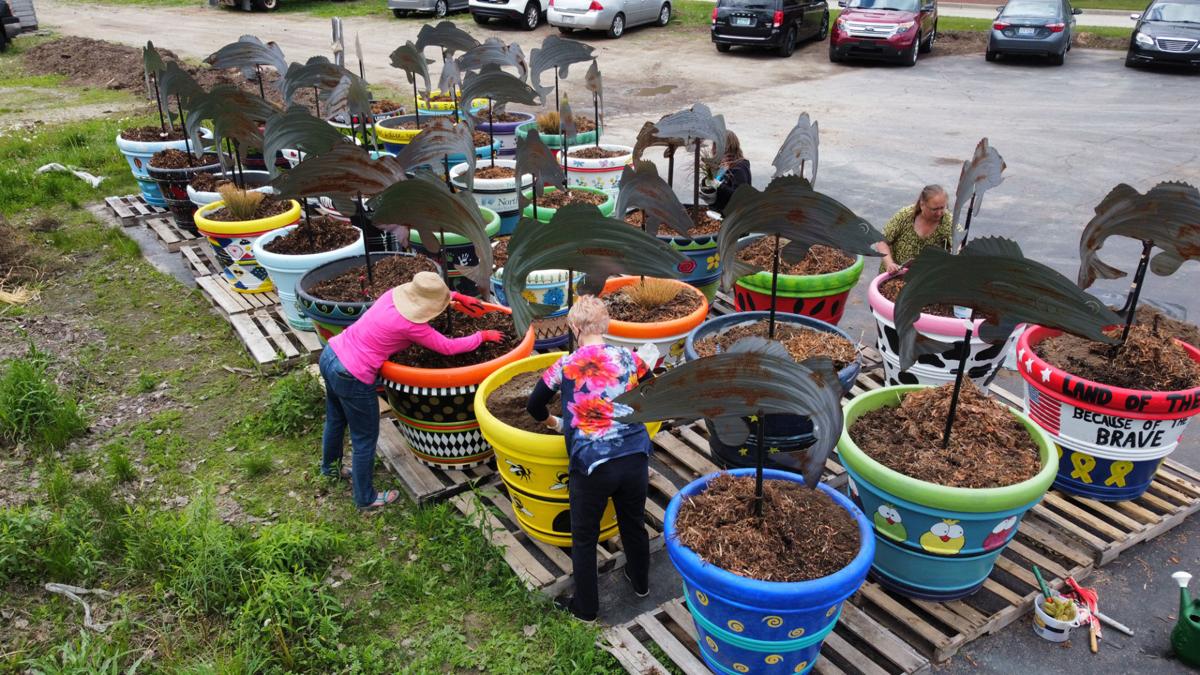 Wednesday afternoon at Marinette Farm and Garden and Pets Too!, a group of volunteers packed in the dirt and the flowers for 31 elaborately painted planters for the City of Marinette annual potted art initiative. Volunteers included Kim Brooks, Linda Netzer, Michelle Uecke, Kathy Springberg and Jacqueline Boudreau. 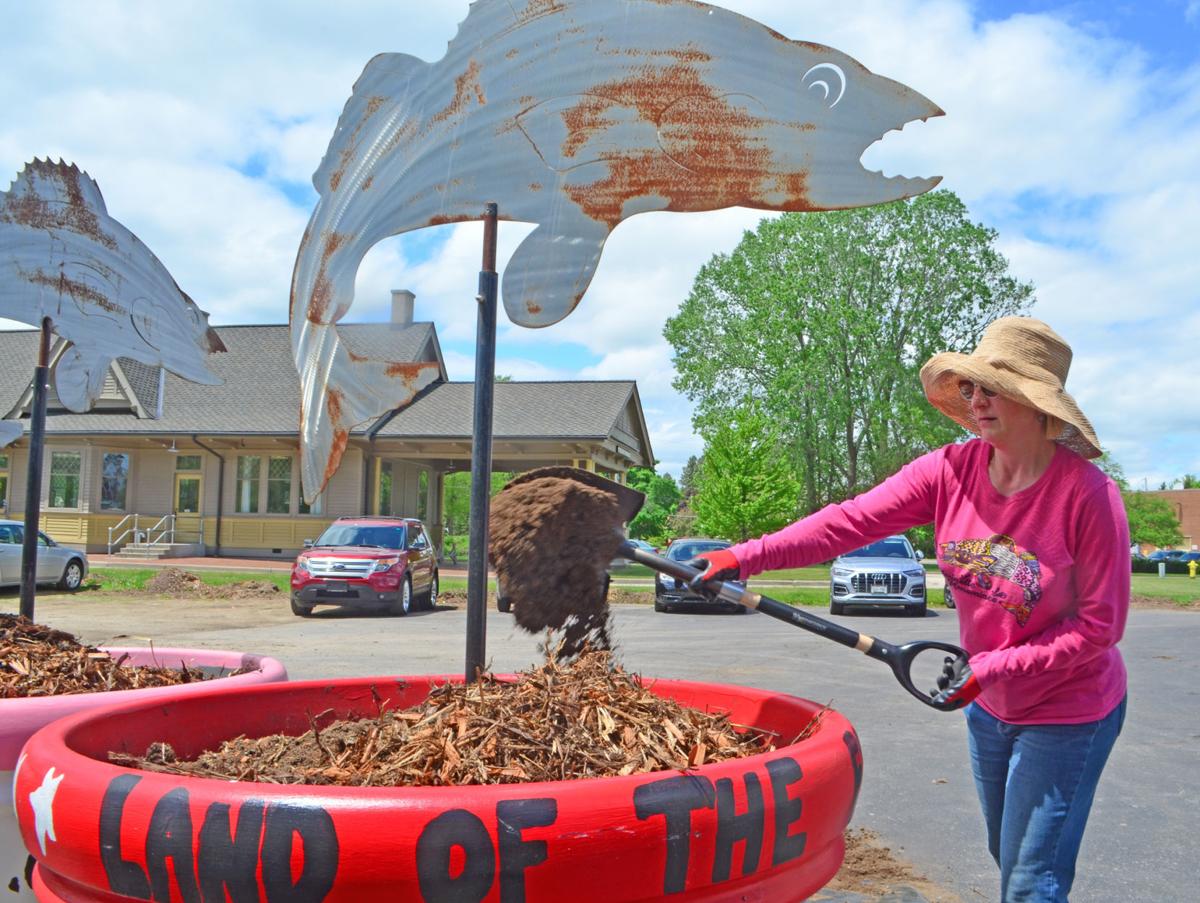 Kim Brooks spent Wednesday afternoon volunteering her time to help ready the City of Marinette public art planters for their prominent display along Marinette Avenue. She was assisted by Linda Netzer, Michelle Uecke, Kathy Springberg and Jacqueline Boudreau in the parking lot of Marinette Farm and Garden and Pets Too!

City of Marinette Public Works employee Jed Buechler directs his coworker Chris Luitze (inside the forklift) as the two of them spend the early hours of Thursday morning loading some heavy public art pieces onto the bed of a trailer. They spent the next few hours placing the elaborate planters for public viewing along Marinette Avenue medians.

Wednesday afternoon at Marinette Farm and Garden and Pets Too!, a group of volunteers packed in the dirt and the flowers for 31 elaborately painted planters for the City of Marinette annual potted art initiative. Volunteers included Kim Brooks, Linda Netzer, Michelle Uecke, Kathy Springberg and Jacqueline Boudreau.

Kim Brooks spent Wednesday afternoon volunteering her time to help ready the City of Marinette public art planters for their prominent display along Marinette Avenue. She was assisted by Linda Netzer, Michelle Uecke, Kathy Springberg and Jacqueline Boudreau in the parking lot of Marinette Farm and Garden and Pets Too!

MARINETTE — Fish in the windows,

To examine on close

Like many things in the City of Marinette, it all began with fish … or more precisely, five metal fish on a pole in downtown Menominee. A single sculpture by local artist James LaMalfa, helped seed an idea that flourished into a community art initiative that, for the last five years, imbued the Marinette with a seasonal flare of artistic splendor, culture, pride and beautification.

LaMalfa served as an art department faculty member at the University of Wisconsin-Green Bay Marinette Campus from 1969 to 2013.

That initiative burgeoned into a flowering array of hefty and elaborately painted planters along the medians of Marinette Avenue. Spanning from Mickey-Lu Bar-B-Q to the Interstate Bridge, they serve as a tribute to the Marinette-area way of life and also illustrate how art can catalyze a positive community undertaking. Adorned by skillful imagery of both whimsical and affectionate depictions of Marinette culture, history, personality, pride and more, the decorated planters inspire curiosity and interest from those strolling or driving along the city’s main thoroughfare.

“It has created a vibe; it has created more art,” said Marinette Menominee Chamber of Commerce Executive Director/CEO Jacqueline Boudreau. “It just adds to that feeling that there are a lot of creative people in Marinette and Menominee and it offers the chance for them to showcase that art while enhancing the overall appearance of the community.”

City Public Works crews spent Wednesday morning setting out the 31 heavy pots along the Marinette Avenue medians for another summer season showcasing the area’s artistic creations. Those same city employees will spend the summer caring for the flowers planted within each pot. Blooming with color and both in and on the illustrated Terracotta pots, they never fail to draw attention.

“I am in a business where we see a tremendous amount of tourists that come into town,” said Kim Brooks, a proprietor of Main Street Antique Mall in Marinette. “And all summer long the comment we hear more than anything is positive comments about the pots and what a presence (their artwork) is in the city.”

But recognition and curiosity about the pots go far beyond the inquiring tourist.

“It is almost a calling card (for the city)—it puts a stamp on Marinette,” Brooks said. “We have received calls from several municipalities in the region asking us how we pulled it off, what it cost, how they could do the same thing. So we know it is a success if it is getting back to those kinds of folks.”

Providing a hint at how they pulled it off starts with a single sculpted metal walleye that rises from the center of each pot, arching over the flowers.

That origin story starts with five species of fish (walleye, trout, perch, northern and bass), each portrayed in a glossy metal figurine and attached to a pole erected in Menominee’s Sculpture Park, a grassy area adjacent to Boaters’ Lounge along the Menominee Marina. That sculpture ignited a spark of creativity for the Downtown Marinette Action Group (DMAG) in 2017.

According to Boudreau, around that time the DMAG was engaged in discussions concerning the beautification of Marinette. In addition, the Cabela’s National Walleye Tournament announced that it had targeted the Marinette area for a stop on its tour in August of that same year.

DMAG beautification discussion quickly hinged on to LaMalfa’s sculpture and a way to tie it into the Cabela’s tournament.

“We were having those conversations when this tournament popped up in 2017 and so we thought, let’s turn it into some kind of public art,” Boudreau said. “We were exploring all kinds of things … And we really felt like Marinette needed the that … It creates that first impression of why people might want to live here … It is also really important for your community to have a sense of community and caring. If you care about your community you will take care of it and work to improve it.”

The idea took root as various local artists, businesses and organizations all came together and the DMAG launched a public art project coined “Welcoming Walleyes,” which served as a welcoming gesture to participants in the Cabela’s Tournament.

However, the metaphorical ‘light bulb’ that resulted in the ornate planters still awaited the flip of the creative switch.

The Welcoming Walleyes project was modeled after the walleye portrayal on LaMalfa’s Menominee art piece. A business could purchase one of the metal fish, which its employees would then adorn with their creative skills through brush strokes, elaborate mosaics or other methods. Businesses then prominently displayed their decorative walleye creations for visitors and residents to easily view from public areas inside or outside. At the end of the summer, prizes were awarded for the most creative fish décor.

At the time, the purpose of the project was to engage area businesses and residents in welcoming anglers and tourists into the Marinette community and to promote the world-class Walleye fishing that teems through area waterways.

According to Brooks, that first year of the mental fish project (2017), Main Street Antiques sold about 100 of the metal Walleye to the community.

“It was so unbelievably successful from the kick-off that we started thinking about what else we could do,” Brooks said

Quickly, the “Welcoming Walleye” project outgrew its creative britches. It spawned T-shirts and stickers and eventually became a five-year project aimed at depicting each of the five fish on LaMalfa’s sculpture. And ultimately it inspired the decorative planters ornamenting Marinette Avenue. The idea even resulted in the creation of a series of Marinette public benches that offer the weary passerby more of a visual work of art than a place to rest one’s tired caboose.

“A small, great idea about a public art project turned into a much larger five-year plan,” Brooks said.

Thus, working in conjunction with the City of Marinette, Main Street Antique Mall, Marinette Farm and Garden and Pets Too!, and MC Manufacturing—division of Wildlife Decor LLC, the metal fish project has continued for the last five years. Each year transitioning to the next fish on LaMalfa’s sculpture. And each year the project took on a new catchy designation.

The first year served up the “Welcoming Walleye.” Year No. 2 came out with “Trout and About,” and in 2019 organizers threw a “Perch Party.”

And with each year of the metal fish project, so too continued the potted display of public art along Marinette Avenue.

COVID-19 slightly doused the initiative’s creative ambitions in 2020. However, to compensate for lost time and missed opportunity, this year—perhaps the final year of both the metal fish project and the decorative pots—the organizers doubled down with “Nautical Northern” and the “Last Blast Bass” metal fish.

“We have both years four (Nautical Northerns) and five (Last Blast bass) (for sale),” Brooks said. “Because the pandemic sort of crushed our ability to sell as many Northerns to the community as we had hoped.”

Boudreau hopes to see a strong comeback after the pandemic for an initiative that was initially slated as a five-year project.

When it comes to the decorative pots, she pointed out, with great appreciation that sponsorship comes from both area business donations and from the city’s charitable allocation of a few room tax dollars. Moreover, the labor to look after planters, provide adequate watering and other tending throughout the summer falls to the city’s Public Works crews.

“(The pots) definitely add to their workload,” Boudreau said. “But we are just glad we were able to come back this year and do it. With COVID, everything was so uncertain. And (public art) is such a welcoming sight.”

Now that the initiative has reached the final two of the five fish on LaMalfa’s sculpture, the question begs, what comes next year for both the pots and the fish? Boudreau explained that while she would like to see it continue, the decision involves more than just the Chamber and local businesses.

“It’s going to have to be a reconvening and a discussion with the city,” she said. “Because the city owns the pots and they are also the ones that purchase the flowers.”

Both Boudreau and Brooks agree that such public art initiatives go a long way in creating a sense of place, belonging and community solidarity as well as an interest beyond Marinette’s borders.