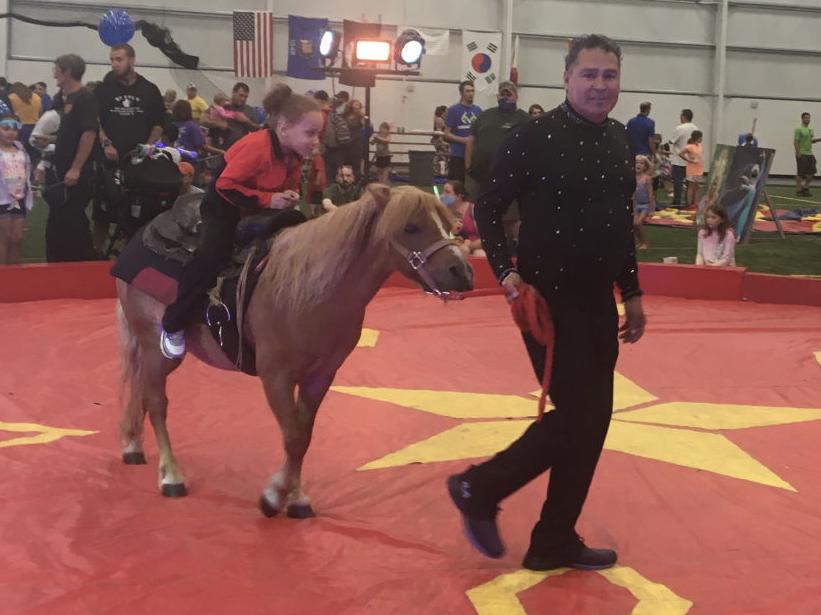 Oscar Garcia gives kids a ride on the miniature horse around the circus ring before the All American Circus show Thursday at the Community REC Center in Marinette. 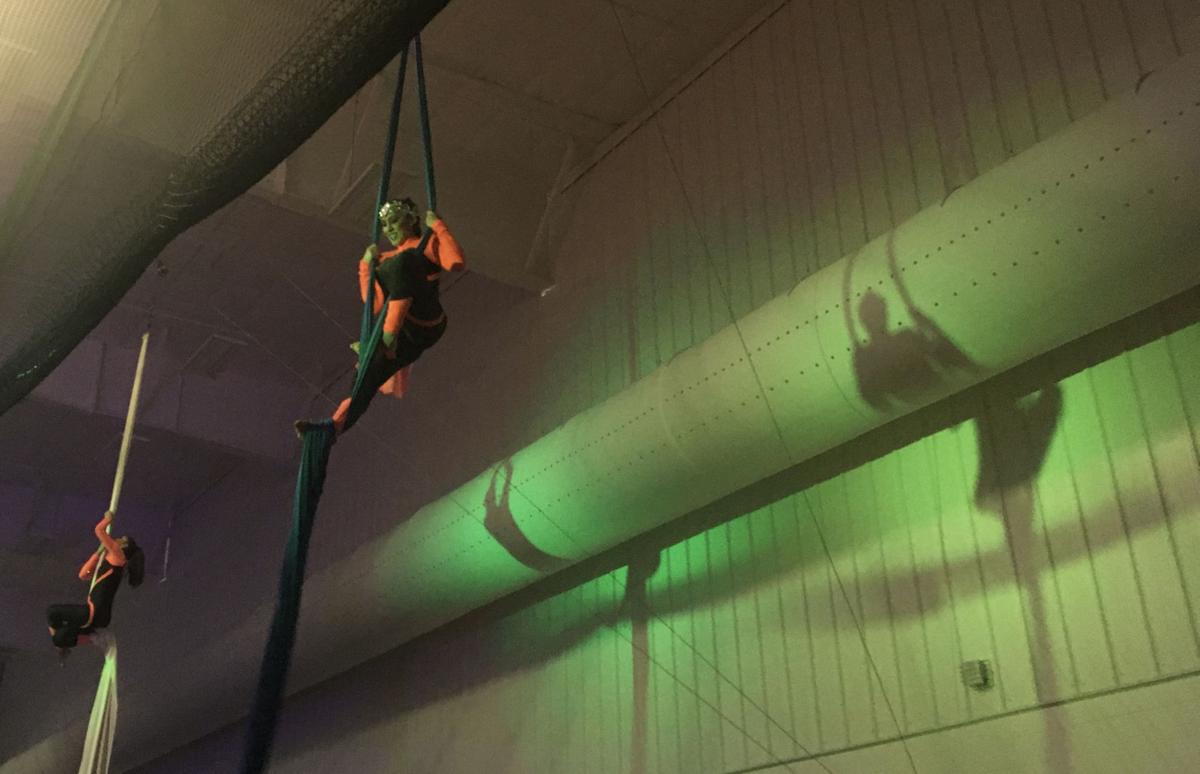 Two women performing acrobatics on ribbons high above the crowd during the All American Circus Thursday at the Community REC Center in Marinette.

Oscar Garcia gives kids a ride on the miniature horse around the circus ring before the All American Circus show Thursday at the Community REC Center in Marinette.

Two women performing acrobatics on ribbons high above the crowd during the All American Circus Thursday at the Community REC Center in Marinette.

MARINETTE—The All American Circus came to the Community REC Center in Marinette for the first time Thursday to entertain locals for a night of acrobatics, fire dancing and motorcycles.

Before the show commenced, attendees milled around looking for seats and stood in long, snaking lines to buy pink cotton candy, popcorn, soda, neon-illuminated toys and plastic trumpets at the booths standing near the entrance. The gymnasium was a kaleidoscope of chatter, blaring trumpets (they sounded like the unfurling horns handed out at kids’ birthday parties) and syncopating lights.

Lindsay Bjorkman, who grew up in Marinette but currently lives in Peshtigo, was standing next to a row of folding chairs with her son before the show. She said it was her first time going to a circus in Marinette and didn’t recall one ever coming to town in previous years. When she asked her young son if he was excited to see the show, he shyly shrugged his shoulders.

“I think he’s more excited to see the motorbike,” she said with a laugh, referring to the finale in which a motorcyclist would ride around inside a spherical cage.

Menominee resident David Freiss, who was standing in line with his grandson for one of the booths, also said he had never been to a circus in Marinette. He recalled, however, going to a circus in Menominee with his daughter over 20 years ago.

“I feel kinda scared because I’m scared of clowns,” Freiss’ grandson said with a smile when asked if he was looking forward to the show. He added that he had never been to a circus in Marinette before and only came to the REC Center to sign up for soccer.

Attendees filled the bleachers and rows of grey folding chairs and spilled onto the artificial turf surrounding the maraschino-red circus ring as the time came closer for the show to start. About a quarter after 7 p.m., circus host Oscar Garcia told everyone to settle in for the performance.

The show opened with a dance act by two women in white leotards, silver high heels, tiaras and purple boas, followed by a young man with a blue velvet jacket and black top hat who played the clown and juggled neon orange discs and pins. The music was grainy and thunderous, forgoing the traditional circus theme in favor of modern pop and jazz.

Next, two men in shimmering yellow shirts and orange pants entered the ring, one of them hoisting a pole above his head and the other nimbly climbing to the top where he balanced and lifted his legs into the air.

The lights dimmed and a woman emerged to perform a pyrotechnic dance, spinning her spoked hoops until they framed her in halos of fire.

Afterward, the young man in the blue velvet jacket invited two men, both goateed, into the ring and instructed them to hold a hoop which he lept through. He also singled out a young woman to join him and had her hold sticks onto which he placed spinning soccer balls. After this, he donned a pair of red heart-shaped glasses and lip-synced Dolly Parton’s “I Will Always Love You” as he offered her a white rose.

A group of four performed a choreographed juggling act where they fluidly moved around one another as pins flew up spinning in the air.

During intermission, Kerri Ducaine-Whiting, who grew up in Crivitz but currently lives in Marinette, stood by the bleachers holding her daughter. She said she and her family were enjoying the show, but that it was late in the evening for her kids to be out.

“We love it, but our kids are tired and want to go home,” she said, laughing.

She added that it was nice to have a performance come to Marinette.

Greg Tronson-Westby was standing in line for cotton candy with his son during intermission. He said the show was “alright” but that, as a former member of the military, he had traveled quite a bit and seen more impressive circuses in bigger cities. In particular, he said other circuses had more animals, whereas this one featured just the miniature horse.

Tronson-Westby took a pause when he got to the front of the line to order three cotton candies and two Pepsis, then added that his favorite part of the show was the juggling. His son said with a grin that he enjoyed the pyrotechnic performance the most.

The intermission ended and the second half of the show featured several acrobatic performances on climbing ropes and ribbons, the performers’ shadows projected on the rainbow-lit walls. The show concluded with the motorbike act; a woman with a pink helmet rode on the sides of the spherical cage then revved the engine and drove the motorcycle upside-down, after which another woman joined her in the cage and stood still in the center as the motorcyclist performed the same tricks.

After the show, Garcia, the circus host, stood by the circus ring high-fiving kids from the crowd.

Garcia is a fourth generation circus performer, and his troupe consists of four families. He said it was his first time visiting Marinette and that his experience with the community had been positive.

“We couldn’t have asked for a better crowd,” he said.