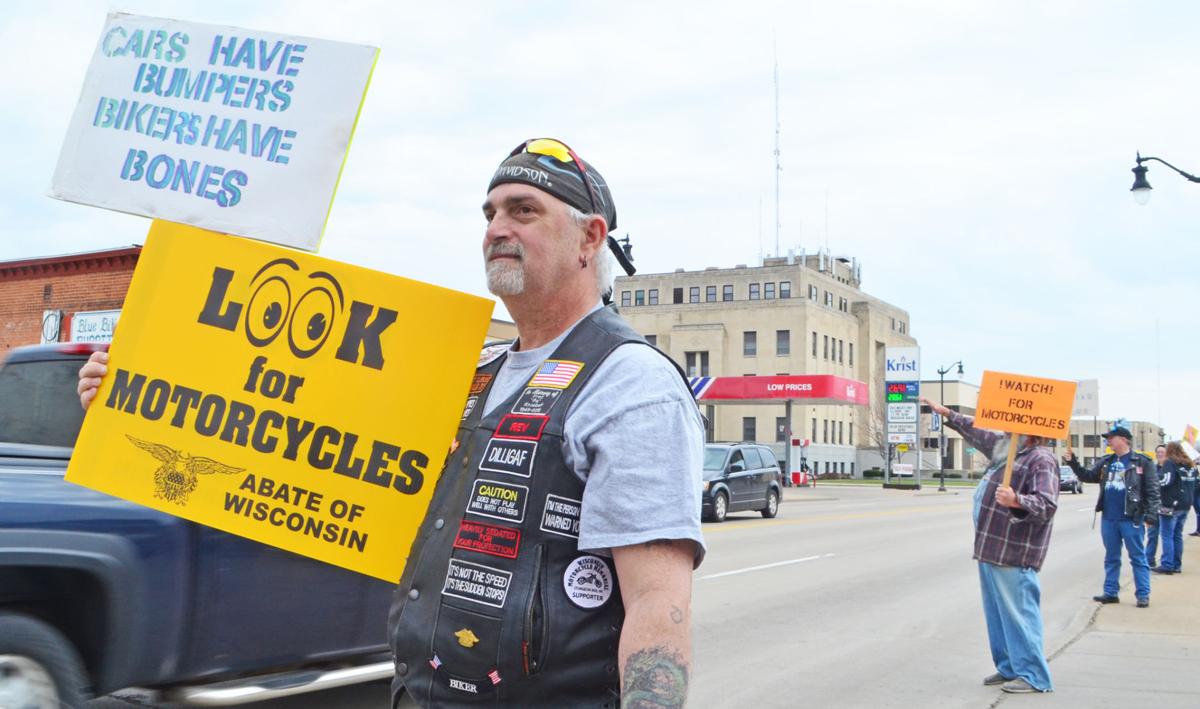 Corey Severin, and others from the Triple C Riders, encourage motorists to be on the look out for motorcycle riders Saturday in Marinette. 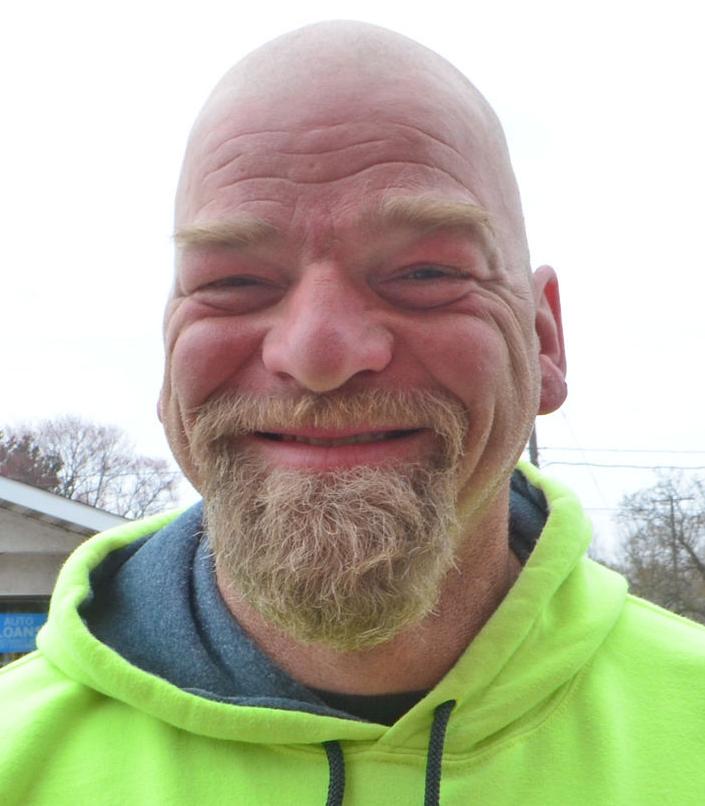 MARINETTE—The toughness of these bikers burns in the altruistic warmth of their hearts, propelled on the resonating power of that distinctive guttural rumble as their sweet “HOG” engines roll down the asphalt.

“It’s about, first and foremost, the people,” said Jeff Miller, one of those bikers who spent Saturday promoting awareness, charity and chili along Hall Avenue in Marinette and inside Lolli’s Bar.

And Miller’s face, one that seemed made to smile, beamed throughout his words.

“You look up and down the street here,” he continued. “This is just a small sampling of some of the most kind-hearted, give-you-the-shirt-off-their-back, help-you-in-any-situation and be-there-for-you-through-thick-and-thin, kindest people that I have ever met in my life.”

Miller serves as president of the Triple C Riders, a nonprofit biker club comprised primarily of individuals from across Menominee, Marinette and Oconto counties that band together with the commonalities of their compassion for the freedom of the open road along with a commitment toward lending a hand to support the local needs of people and organizations from across the area.

The group kicked off Saturday morning promoting motorcyclist safety and awareness along Hall Avenue in Marinette before heading into Lolli’s Bar where the club held its seventh annual Chili Cook-off, raising funds that will support various charities and causes throughout the year.

For 15 years, Triple C Riders has focused its charitable energies on nonprofit charities through various annual fundraisers that include the annual chili cook-off, a Biker Ball, two meat raffles and three annual rides. The monies raised from those events go to various non-profits charities in the Oconto, Marinette and Menominee counties.

“We basically raise donations throughout the year,” Miller said. “We are active January through December, raising funds for local nonprofits and groups that need our help.”

Dedicated to causes that run the gamut from infant car seats to homeless veterans, Triple C Riders perseveres to lend their hands to any facet of society that reveals the need and approaches the group to ask.

A big part of the fundraising stems from the three biker rides each year. Miller said the rides usually span about 100 miles and can vary in participant level from 20 bikers to as many as 150, depending on weather conditions.

“We enjoy what we do; we love helping the community,” Miller said. “And the groups that we are in contact with are some of the angels on this earth.”

Some of those angels are represented in the upcoming charity rides scheduled for this summer, including the 2021 River Cities Charity Ride on July 10, which benefits CASA-Menominee County (Court Appointed Special Advocates). CASA speaks on behalf of abused or neglected children who, as a result of that neglect, are placed under the jurisdiction of the court.

Later in the summer, Aug. 7, the Water Front Weekend Ride puts the rubber to the road for the Upper Peninsula (UP) Foster Closet. The UP Foster Closet represents a series of independently funded and operated 501©3 non-profit, tax-exempt organizations dedicated to providing assistance for children placed in local foster care or other care besides their biological parents.

For those interested in a full schedule of Triple C Rider events or those who want to join the ranks of compassion demonstrated by the club, visit their website at www.triplecriders.org. From there one can register for events and offer donations.

Moreover, Miller pointed out, as does the website: “We enjoy riding motorcycles but welcome anyone that rides or drives anything to join our organization or rides …”

... Because the work they do, cannot be done without a community.

“I want to thank the community and the local businesses that we solicit,” Miller said. “And the local people that give and help make this possible.”

In the end—despite all the angled and polished chrome, or the revel of low idling engines, despite the leather garbs, or the wind in your face and the world spread open across wide canvas into which the open road leads—despite all that, everything circles back to the one and most important thing for Miller and many other riders in the group.

“(It’s about) the friendships that you make,” he said. “Going out on rides together and seeing new places, places that you never would have seen otherwise without being on a motorcycle and being in these groups that love to just go and explore … freedom. Just freedom.”

Motorcycle Safety Awareness in May