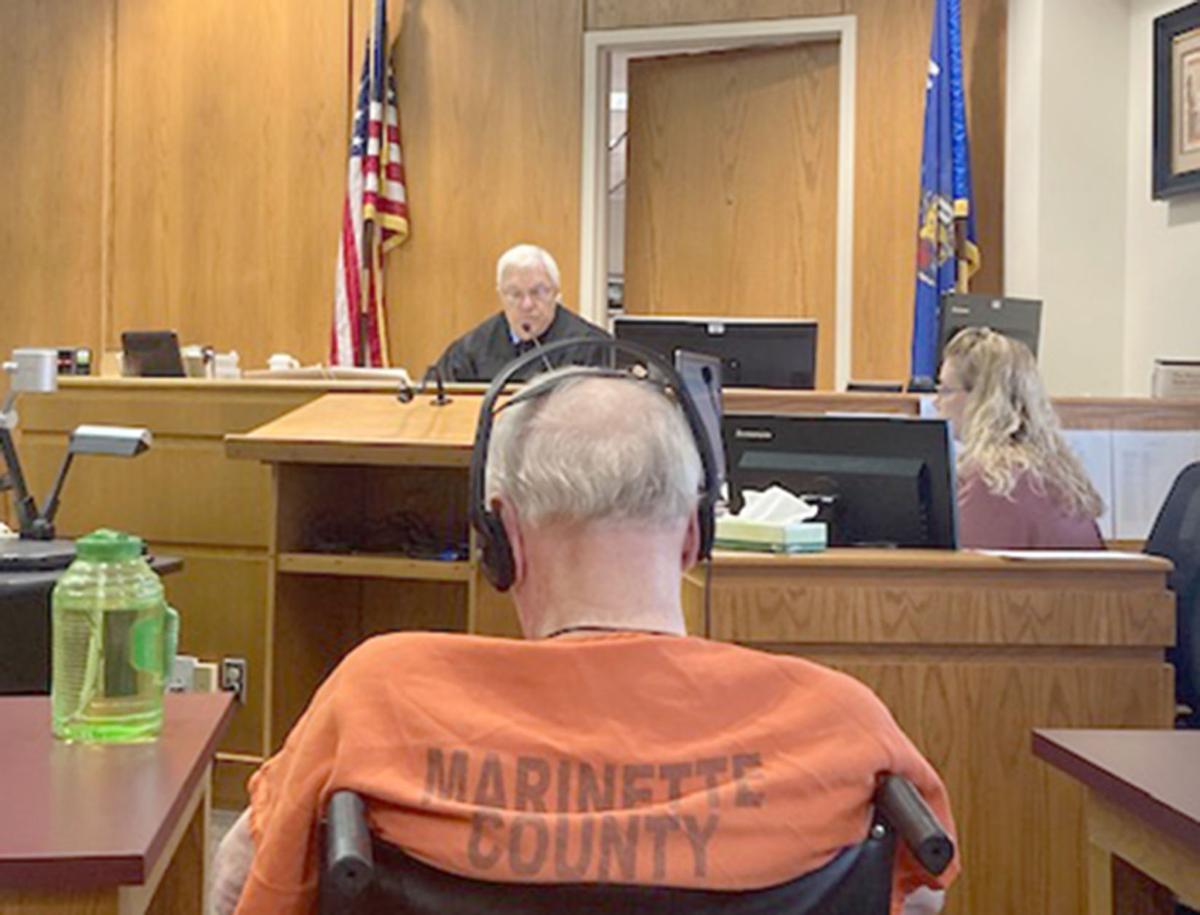 Marinette County Circuit Judge Jim Morrison speaks during the sentencing hearing for Raymand Vannieuwenhoven Thursday in Marinette. Morrison handed down consecutive life sentences to the defendant for the 1976 murders of a Green Bay couple. At right is Clerk of Courts Sheila Dudka. 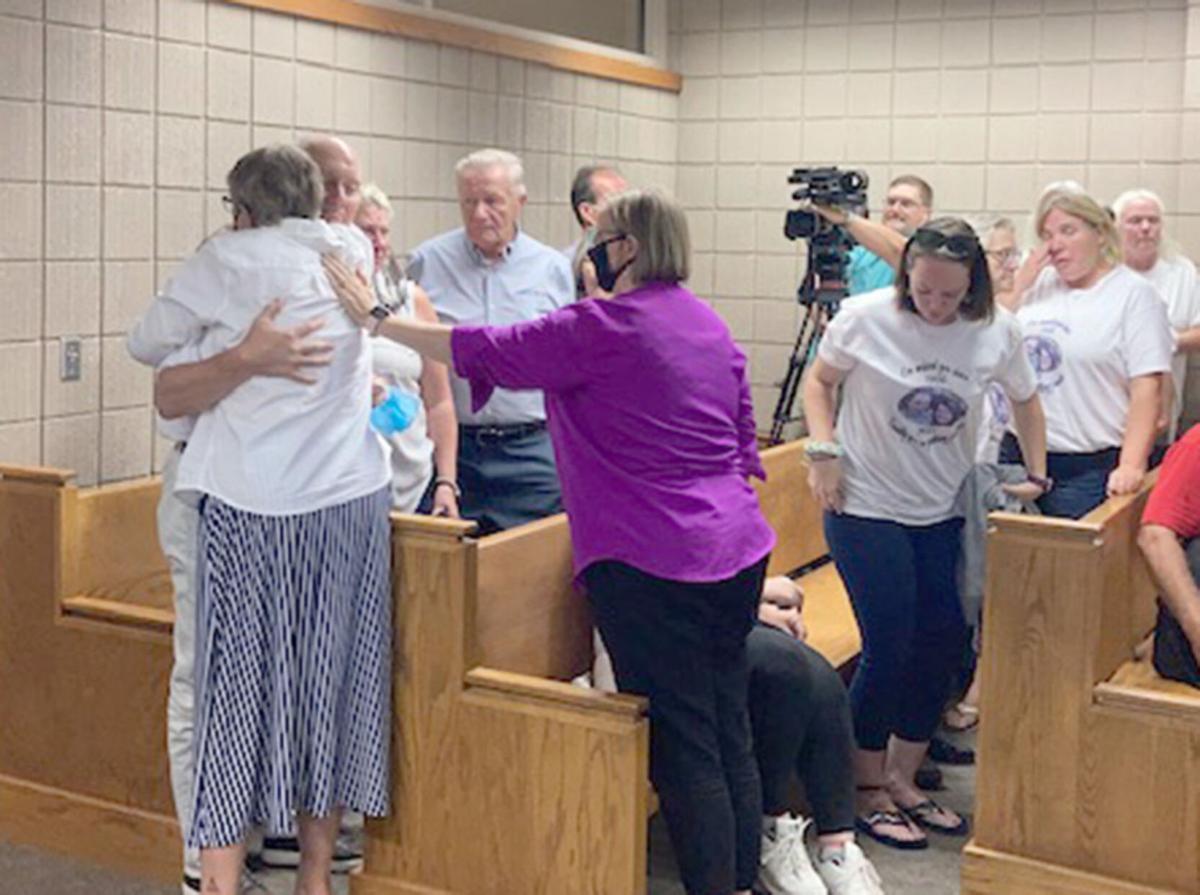 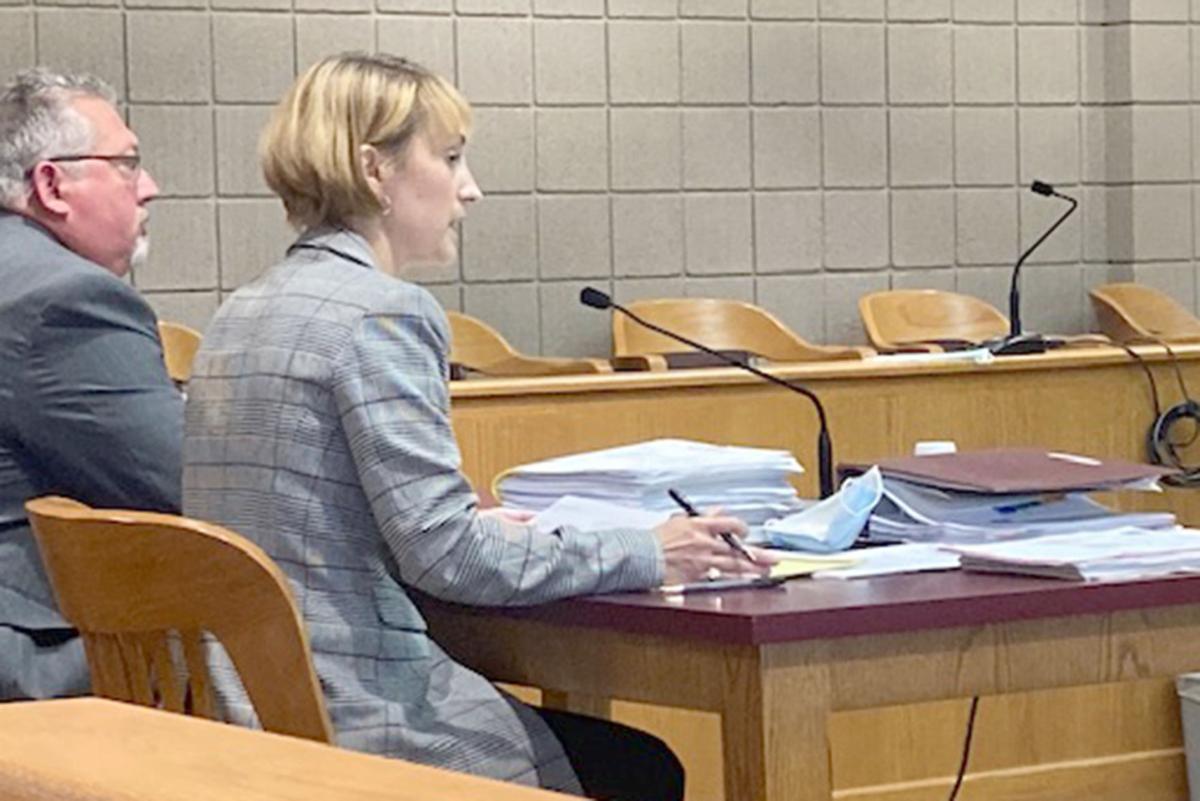 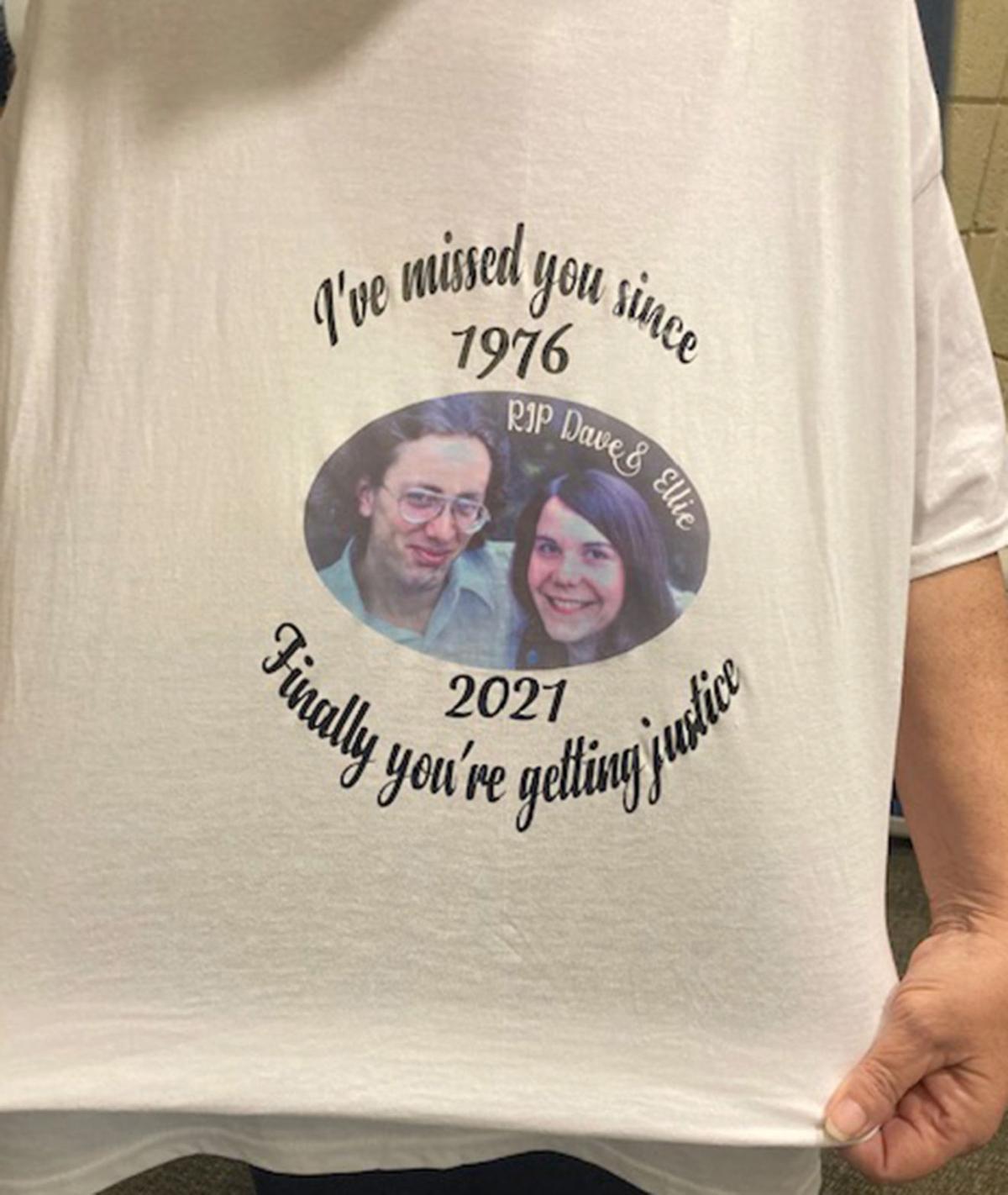 A family member shows the T-shirts worn by loved ones of the victims of a 1976 double murder in Marinette County. The killer of the young Green Bay couple was sentenced Thursday to consecutive life sentences.

Marinette County Circuit Judge Jim Morrison speaks during the sentencing hearing for Raymand Vannieuwenhoven Thursday in Marinette. Morrison handed down consecutive life sentences to the defendant for the 1976 murders of a Green Bay couple. At right is Clerk of Courts Sheila Dudka.

A family member shows the T-shirts worn by loved ones of the victims of a 1976 double murder in Marinette County. The killer of the young Green Bay couple was sentenced Thursday to consecutive life sentences.

MARINETTE—A niece of murder victim Ellen Matheys said she no longer takes quiet walks in the park. A childhood friend of Matheys said she can’t sleep with her windows open at night out of fear.

Those were some of the feelings voiced Thursday at the sentencing hearing for convicted double murder suspect Raymand Vannieuwenhoven in Marinette County Circuit Court Branch 2. Circuit Judge Jim Morrison sentenced Vannieuwehoven, 84, Lakewood, to the maximum penalty of consecutive life sentences for the 1976 murder of David Schuldes and Matheys.

Schuldes, 25, and Matheys, 24, both of Green Bay, were shot and killed on July 9, 1976, at the McClintock Park campground in the Town of Silver Cliff. Matheys was raped before she was killed. The couple was engaged with a September 1976 wedding planned.

A Marinette County jury last month found Vannieuwenhoven guilty of two counts of first-degree murder. The rape charge has previously been dropped because the statute of limitations has run out. As Morrison announced the sentence Thursday, the suspect showed no emotion from his wheelchair next to his defense team.

Four friends and family members of the victims spoke prior to sentencing. Morrison said he received several other victim witness statements.

Lori Smith, Green Bay, a niece of Matheys, said she was 13 years old when the crimes were committed. “I, as well as so many others, had a special connection with Ellie,” she said.

Smith said she remembers the day her mother received a call informing her of the murders. “She fell to the floor,” she said. “I was in shock and the next few days were a blur.”

Smith said the funeral for Matheys took place on her golden birthday. “The image of my grandmother grabbing the casket and sobbing uncontrollably is etched in my mind and will be there forever,” she said.

Because of the murder of her aunt, Smith said a ripple effect has taken place as she has dealt with depression and became a strict and over-protective mother to her two daughters and to her grandchildren. “This defendant will face the highest judge one day, for now Judge Morrison, I ask for the toughest, maximum sentence by law to be handed town to Ellie’s and David’s murderer.”

Lynn Baumgartner, a childhood friend of Matheys who was to be the maid of honor in her wedding, looked at Vannieuwenhoven and said, “Your actions, defendant, changed my life forever. I was a wreck. Their murders affected me from that day forward. My best friend was gone—buried five days later. No one talked about their murders. There was no such thing as grief counseling in those days.”

Baumgartner said she has had nightmares and wakes up many mornings in a cold sweat.

“As far as I’m concerned, you have no soul and no regard for human life,” she said, looking at the defendant. “My God, David didn’t know what hit him. You dropped him like an animal. And I know Ellie knew what was coming. I can’t begin to imagine how scared she was.”

Baumgartner said Vannieuwenhoven deprived many people of a happy ending. “There is no happy ending, just justice as they lock you up for a long time, which is my hope,” she said. “Seeing you in that (orange) jumpsuit makes me smile.”

She said she wants the defendant to remember his actions every day he is alive. “I hope you live many more years so you can be as miserable as possible locked up where I think you belong.”

District Attorney DeShea Morrow said the killings were “cold, calculating and brazen” and she asked for the maximum penalty. She said another sad part of the case is Vannieuwenhoven made his own family members victims because of his actions. “There has been no sense of remorse,” she added.

Defense Attorney Travis Crowell, who along with Lee Schuchart, handled the defense, called for concurrent sentences—meaning they run at the same time. He pointed out that Vanniewenhoven was a hard worker who took care of his family and was “an overall asset to the community.”

The suspect’s youngest daughter, Dorothy Vannieuwenhoven, was the only person to speak for the defense. She told the court they “have the wrong guy” and DNA evidence doesn’t make her father a killer.

She then addressed her father, reminiscing about the last time they were together, on his 82nd birthday. “I still take out a picture I took that night ... it still makes me smile, it still makes me happy,” she said.

Dorothy said she doesn’t believe her father could have done these horrible crimes. “You are the only one, truthfully, that knows what happened,” she said. “All I know for sure is, you are my dad—you always will be my dad and I love you and I always will love you.”

The defendant, given a chance to speak, provided about a two-minute rambling statement that was difficult to understand. He did say everything was rigged, “right from the word go when they put me that jail.”

He also seemed to make accusations against DA Morrow, but what he was saying was incoherent and again, difficult to understand.

Morrison had the final say.

He said Vannieuwenhoven’s actions had more than a ripple effect and was like dropping a “boulder in a pond” rather than a stone as it affected generations of family members.

“This is the impact of these two senseless, awful, heinous, idiotic, unspeakable crimes,” Morrison said.

The judge said the victims were selected at random. He said he has no words to describe the horror of these senseless murders.

Morrison said he doesn’t care about rehabilitation in this case because Vannieuwenhoven will not see the outside of a prison.

“The saving of a soul, that’s between he and his creator, but on this earthly life, he is going to be in the custody of the State of Wisconsin,” he said.

Morrison gave thanks to everyone involved in the case, especially Detective Todd Baldwin of the Marinette County Sheriff’s Office who refused to give up on the matter and was the lead person in sending DNA evidence for state-of-the-art testing that proved pivotal in this case.

Following the hearing, Morrow said she was very satisfied with the results. “Most of all grateful for all the hard work that went into this,” she said. “Grateful for all the great partners in law enforcement that I have. Also, for the victims’ families that hopefully can have some closure and finality for this very, very long saga.”

Sheriff Jerry Sauve said he had, “great admiration for the district attorney and her prosecution team. They did a great job.”

Lori Smith, the niece of Matheys who testified, said the sentence was “spot on.”

“It’s what he deserved,” she said. “Forty-five years he lived his life. This is what we hoped for—that he would get the two life sentences. We are happy about that. Hopefully we can start the healing process and (get) closure.”