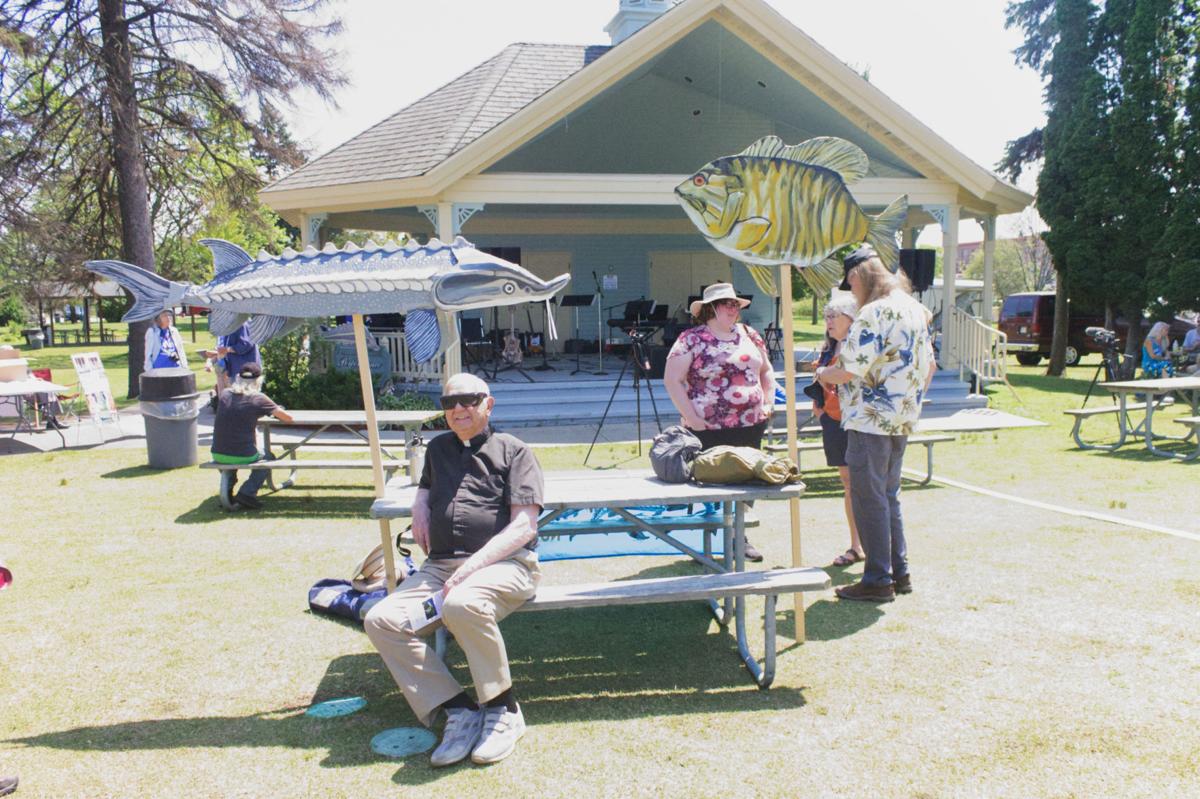 Retired pastor Jo Mattern attends the event and has been involved in various other social justice causes. 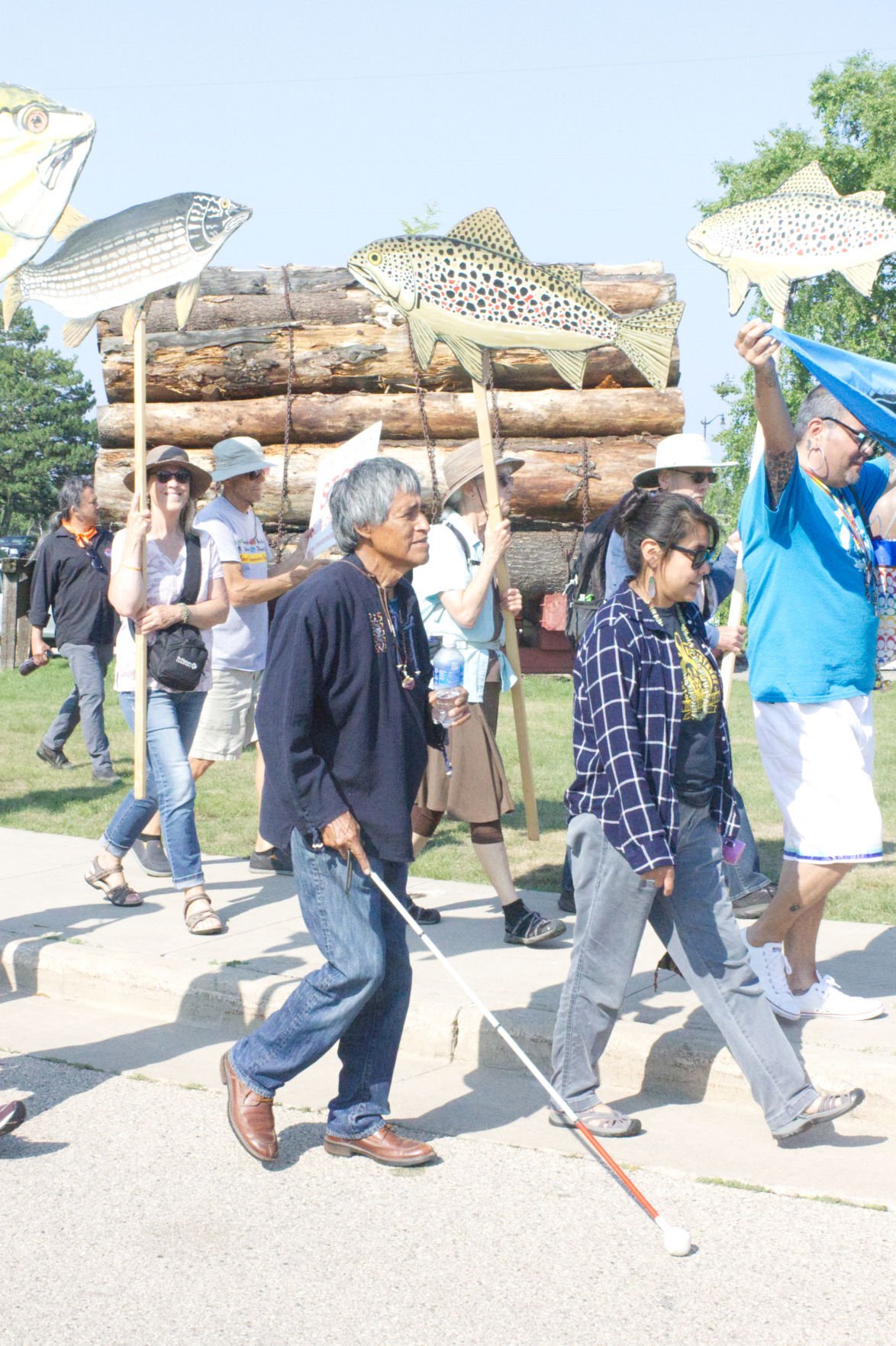 Protesters make their way to Bridge Street at the beginning of the protest.

Retired pastor Jo Mattern attends the event and has been involved in various other social justice causes.

Protesters make their way to Bridge Street at the beginning of the protest.

MARINETTE—The Menominee Indian Tribe of Wisconsin, the Indigenous Caucus of the Western Mining Action Network and the Coalition to SAVE the Menominee River came together on Stephenson Island Friday to protest the proposed Back Forty Mine and celebrate the waters of the Menominee River.

After keynote speeches by representatives of each group, five generations of Menominee women garbed in long, vibrant skirts lined up from eldest to youngest in front of small, copper-colored vessels to partake in a ceremony blessing the waters of the Menominee River. Shortly thereafter, the crowd took up their signs and walked across the bridge to downtown Menominee in protest of the mine.

The Back Forty Mine is a prospective gold and zinc mine near Stephenson, Michigan, owned by the Canadian exploration company Aquila Resources, Inc.

Finding profitable ore deposits is exceedingly rare; the company estimates that only one out of every 100,000 prospective sites contains mineable quantities of metal.

This may explain why Aquila Resources has been persistent in pursuing the excavation of the Back Forty Mine despite obstacles in obtaining the proper permits. The company currently has two of them—a Michigan Air Use Permit to Install and a National Pollutant Discharge Elimination System permit (NPDES) — but had its Wetlands Permit revoked in January and has withdrawn its most recent application for a Dam Safety Permit. In addition, it isn’t clear if the company will be able to use the Michigan Air Use Permit to Install and the NPDES permit for its new plans to excavate an underground mine.

These setbacks, however, may just be temporary. According to Aquila Resources’ 2020 Preliminary Economic Assessment report, the company intends to reapply for the necessary permits after it has completed an optimized feasibility study integrating new plans for the mine.

But the company also has to contend with negative public sentiment. According to the Water Resources Division of the Michigan Department of Environmental Quality, of the 3,418 comments it received during the public comment period regarding Aquila Resources’ wetlands permit, nearly 99% stated opposition to the project, citing adverse environmental and cultural impacts as the main concerns. Furthermore, in an August 2018 survey of 362 Menominee County voters conducted by the Coalition to SAVE the Menominee River, 93.3% were opposed to the mine.

“It’s horrifying that (Aquila Resources) could come in and destroy something that belongs to the people,” he said.

This belonging goes back countless generations for some. The verdant lands embracing the Menominee River are the ancestral home of the Menominee people, who have lived in areas of Wisconsin and Northern Michigan for over 10,000 years. Sacred sites such as group and individual burial mounds, ceremonial dance circles and prehistoric raised garden beds mark the country as testament to their presence.

According to Tribal Historic Preservation Officer David Grignon, 66 of these sites exist on and adjacent to the land of the proposed Back Forty Mine.

“We have a responsibility to our next seven generations to preserve our resources, because water is life,” Fernandez said. “The Menominee are in this fight to protect our culture, our burial sites and our sacred origin site.”

By origin site, Fernandez was referring to the Menominee Tribe’s creation story, which centers around the mouth of the river.

“We need to unite and we need to speak for our land, air and water,” she said. “Being Sturgeon Woman, I’m here to tell you that I will fight till the end for my brothers and sisters that are in that water. That is part of our creation story.”

Environmental damage is another concern. Contamination from the mine could threaten wildlife populations such as lake sturgeon and smallmouth bass that live in the Menominee River and Lake Michigan, according to the Sierra Club and other environmental advocacy groups. Coalition to SAVE the Menominee River volunteer Natalie Lashmet explained that such contamination would include chemicals like cyanide, for instance, which has to be used to extract the miniscule traces of gold that are in the mine. In addition, excavation and the production of millions of tons of waste rock would leave a massive physical scar on the land.

Aquila Resources currently claims that the Back Forty project will generate more than 264 direct permanent jobs. In addition, the local community will receive 65% of the 2.75% severance tax that the company is required to pay for the minerals that it sells, which the company estimates would generate $7.54 million in revenue.

Environmental attorney Ted Warpinski, who works with the Coalition to SAVE the Menominee River, questioned, however, the benefits of the mine’s short-term economic effects versus its potential negative long-term impacts. Warpinski said Aquila Resources’ numbers don’t take into account the potential economic impact that the mine will have on, for instance, the community’s tourism and recreation industries.

“Has Aquila Resources really considered the effects on local tourism? Are people going to still use the river if there’s a mine right there versus if it’s in a more pristine condition?” he said.

Despite Aquila Resources’ plans to move forward, former pastor Mattern and others attending the protest expressed optimism in regards to preventing the project’s fruition.

“We’re too strong,” he said. “If it were to go through, we’d have another Little Rock.”