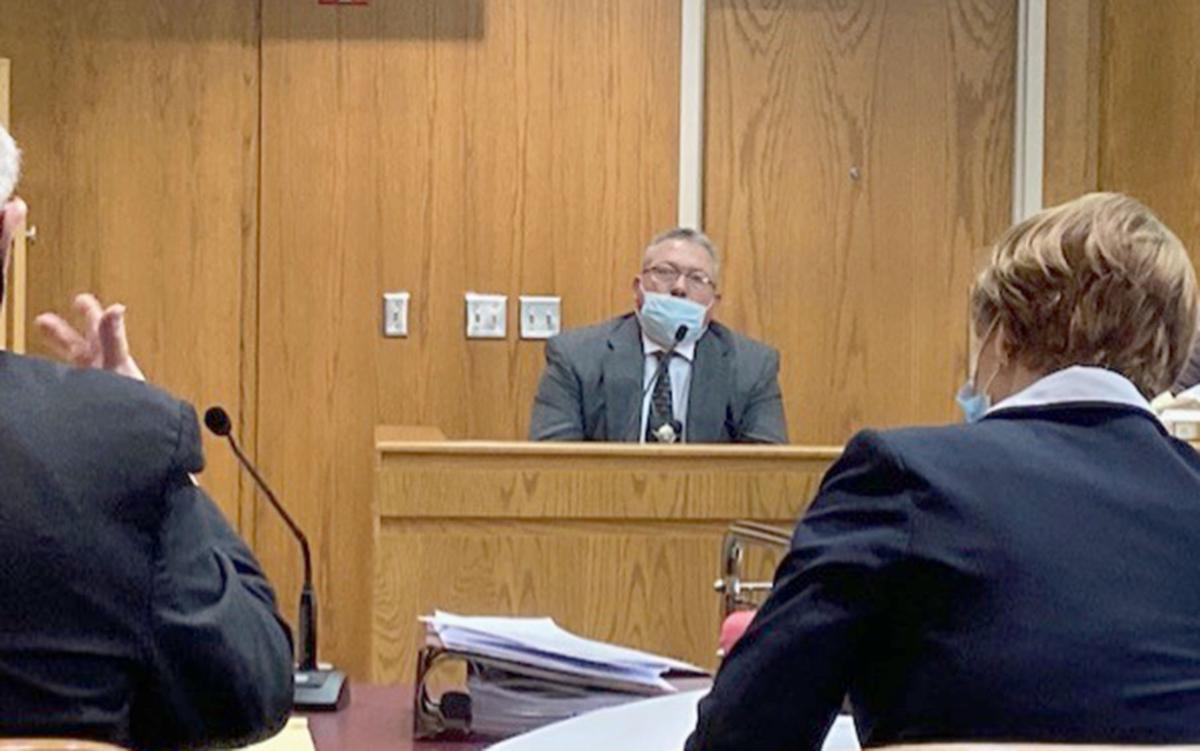 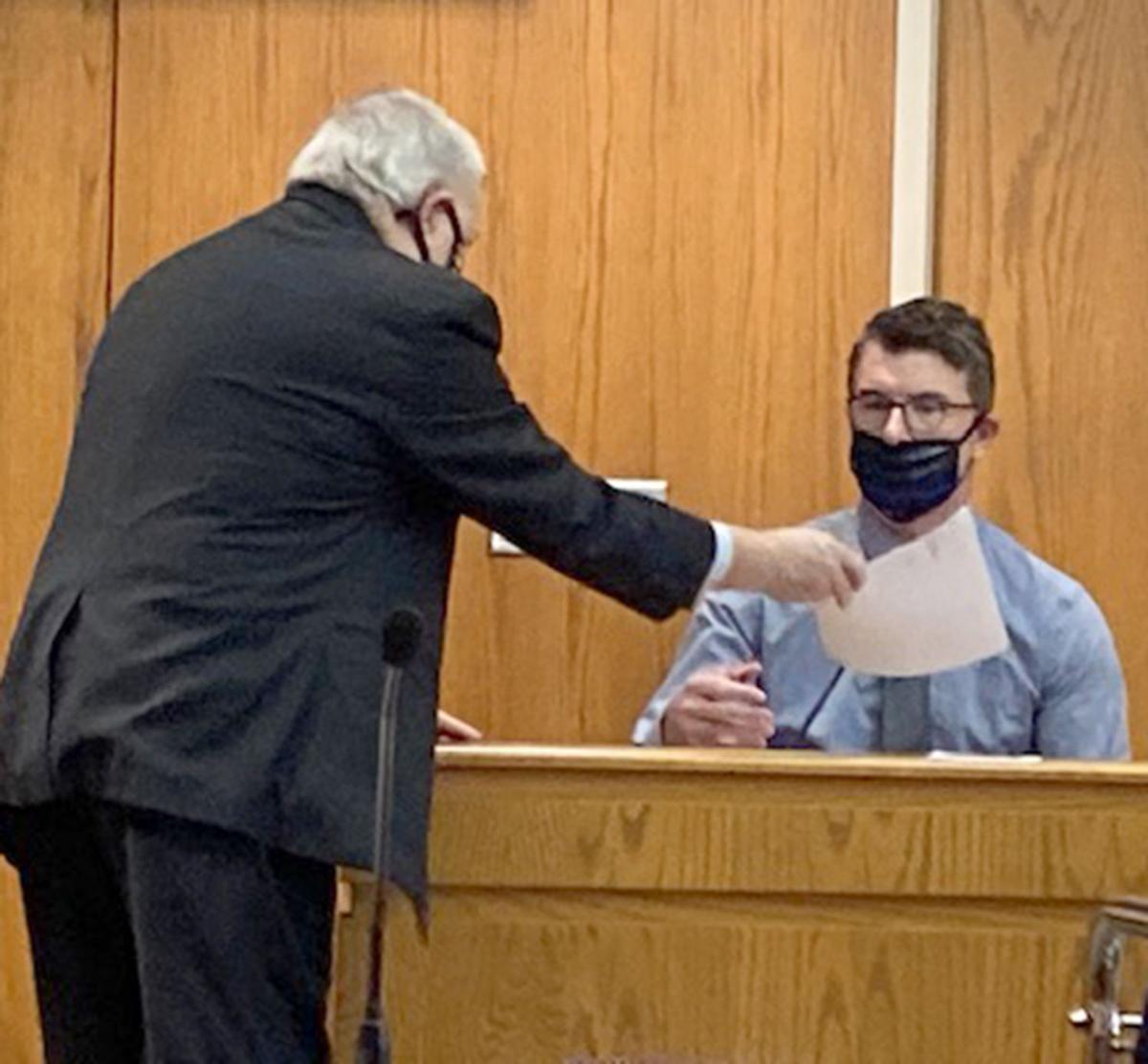 Special prosecutor Mark Williams, left, hands a court exhibit to Oconto County Chief Deputy Darren Laskowski Friday at a motions hearing for Raymand Vannieuwenhoven, who is charged with a 1976 double murder in Marinette County. Laskowski played a vital role in gathering DNA evidence from the suspect. 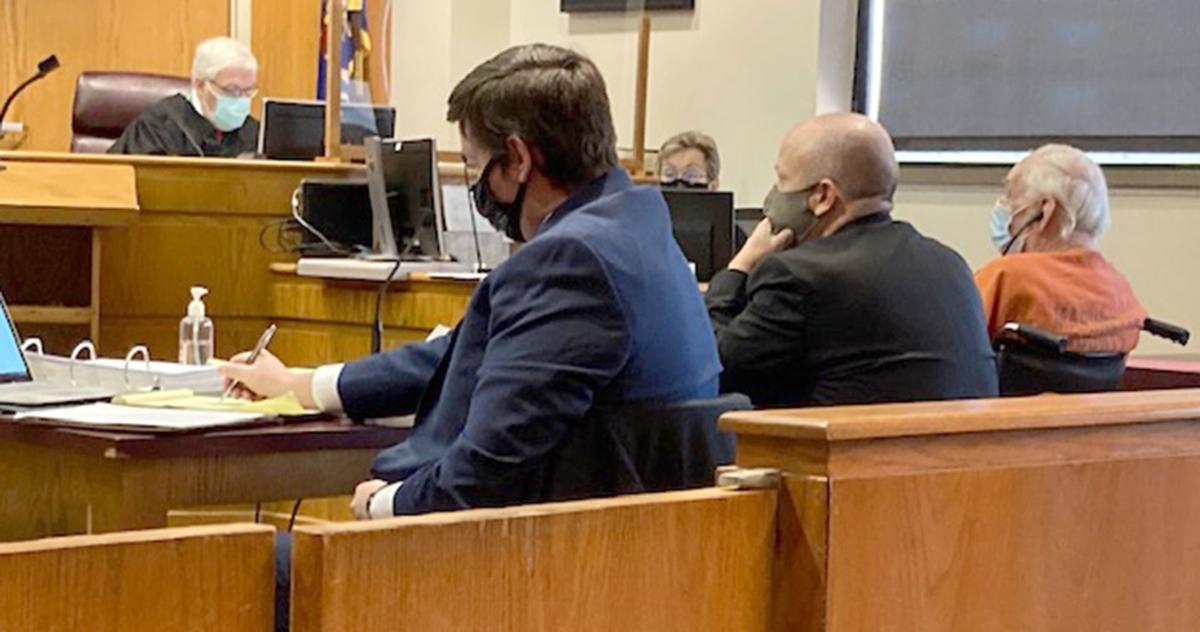 Defense attorney Lee Schuchart takes notes Friday at a motions hearing for his client Raymand Vannieuwenhoven, far right, who is charged in a 1976 double murder in Marinette County. Seated to Schuchart’s right is co-defense attorney Travis Crowell. Back left is Circuit Judge Jim Morrison and barely visible to his left is clerk Denise Sunstrom.

Special prosecutor Mark Williams, left, hands a court exhibit to Oconto County Chief Deputy Darren Laskowski Friday at a motions hearing for Raymand Vannieuwenhoven, who is charged with a 1976 double murder in Marinette County. Laskowski played a vital role in gathering DNA evidence from the suspect.

Defense attorney Lee Schuchart takes notes Friday at a motions hearing for his client Raymand Vannieuwenhoven, far right, who is charged in a 1976 double murder in Marinette County. Seated to Schuchart’s right is co-defense attorney Travis Crowell. Back left is Circuit Judge Jim Morrison and barely visible to his left is clerk Denise Sunstrom.

MARINETTE—A Marinette County judge will review information from attorneys regarding a motion to suppress key evidence against a suspect in a decades-old double murder.

Circuit Judge Jim Morrison also denied a bond modification request that would have allowed Raymand Vannieuwenhoven to post a reduced bail and exit the Marinette County Jail. The suspect was in court Friday with his attorneys Lee Schuchart and Travis Crowell.

Vannieuwenhoven, 83, Lakewood, is charged in a 1976 double murder of a Green Bay couple who was camping at McClintock Park in the Town of Silver Cliff. David Schuldes, 25, and Ellen Matheys, 24, were shot and killed at the campground. They were engaged.

The case went cold for many years until a Virginia lab, utilizing new DNA technology, informed the Marinette County Sheriff’s Department that it had made a break in the case.

The first matter Friday was a motion to suppress evidence, namely, how the state obtained a DNA sample from Vannieuwenhoven without a warrant.

Baldwin, who has been a detective with the sheriff’s department for about 19 years, said he has been working on this cold case since the early 2000s. He explained how a breakthrough came in 2018 when Parabon Nanolabs of Virginia developed new technology to examine DNA evidence.

Attorney Mark Williams, a special prosecutor in this case, asked Baldwin why he requested that Parabon Nanolabs examine the DNA profile of evidence—semen taken from Matheys’ shorts.

“They were coming up with new technology where they could give us certain genetic characteristics of possible suspects through the DNA,” Baldwin said.

On Dec. 21, 2018, Parabon contacted Baldwin and informed him that a possible suspect was found through the DNA testing.

“They gave us a certain family,” Baldwin said, adding that it was the Vannieuwenhoven family, which had four sons and four grandsons who possibly could be a match.

The detective’s next task was to obtain DNA from the possible suspects. He started with the four sons. Two (Cornelius and Edward) were quickly eliminated as suspects through DNA testing. A third son, Francis, is deceased.

That left Raymand Vannieuwoven’s DNA to be tested. Because Lakewood is in Oconto County, Baldwin sought the services of Laskowski, someone he said he has known through years of detective work.

Baldwin created a fake crime survey for Laskowski, who on March 6, 2019, was able to gain entrance into Vannieuwenoven’s home under the pretense that he was conducting a survey.

Laskowski testifed that the suspect answered the survey questions and then used his saliva to seal the envelope, which then was brought to Baldwin who was waiting about a half mile away. Baldwin said he forwarded the sealed envelope to the State Crime Lab.

Baldwin said it was determined the DNA profile in the envelope matched the profile of the McClintock Park murder suspect.

In cross examination, Schuchart asked Baldwin why he didn’t obtain a warrant once he knew one of the four brothers or the four grandsons may be a suspect. Baldwin said he didn’t want word to get out in the family.

Schuchart asked Baldwin if Raymand Vannieuwenhoven’s name ever came up in his 18 or so years investigating the case. Baldwin said it had not.

The defense attorney also asked if any other residents were asked to take the survey, or if it was targeted toward Vannieuwenhoven.

Baldwin said nobody else was asked to take the survey.

“Is it fair to say you were deceiving these people,” Schuchart asked.

“I guess—to a degree,” Baldwin responded.

Schuchart asked if the suspect consented to giving a DNA sample to which Baldwin replied he had not.

Schuchart then asked Baldwin if there was any other evidence found after the DNA sample came back as a match that linked Vannieuwenhoven to the murders.

“So if this DNA connection isn’t part of the record, if it gets suppressed, there’s no longer any evidence tying Raymand Vannieuwenhoven to this crime?” Schuchart asked.

“That is correct,” the detective said.

Baldwin also said he could not gather a DNA sample from Raymand Vannieuwenhoven’s trash because there was no garbage pickup where the suspect lived.

Laskowski was next to provide testimony. His audio recording of his visit with Vannieuwenhoven, which lasted about 10 minutes, was played at the start of Friday’s hearing.

Under direct examination by Williams, Laskowski described how he was asked by Baldwin to help in getting a DNA sample from the suspect under the guise of conducting a survey. He provided details of the visit, stating he sat at the suspect’s kitchen table, conducted the survey, had the suspect seal the envelope and then he returned the envelope to Baldwin.

During cross examination, Schuchart asked Laskowski if anyone else in Oconto County was asked to participate in a survey. The chief deputy said nobody else was asked.

“So really I could classify this survey as a ruse,” Schuchart asked, which drew an objection from Williams. Schuchart substituted the word “fraudulent” for ruse.

“You didn’t use that survey for the purpose you told Mr. Vannieuwenhoven, correct? Schuchart said. “Correct,” Laskowski replied.

Morrison told the defense it’s obvious to him the strategy used by law enforcement.

“I understand at this point the police used deceptive techniques to get this person to provide DNA,” he said. “That’s loud and clear.”

“This is exactly the same,” she said, adding that Laskowski did not use any threats, pressure or coercion to obtain the DNA from Vannieuwenhoven.

She said once the suspect licks the envelope, he has no right to privacy in that saliva afterward.

Schuchart said the defense will argue as to the level of consent given by Vannieuwenhoven to Laskowski when conducting the survey. He also will argue about the searches conducted by the sheriff’s offices and the Crime Lab.

Morrison said he will take all the briefs into consideration and then provide a written decision.

“It’s clear to me, what I’m going to focus on, was there consent; was the consent exceeded,” he said. “I think those are two legitimate questions.”

The defense must file its briefs by Feb. 26 and the state must respond by March 12. The trial is scheduled for 10 days beginning July 19.

“I think I’ve heard the evidence,” the judge said. “I’ve heard some of what you have to say. I’ve read everything. And I think that this is an important enough case that I would like to write the decision because I’m sure that regardless of the decision I make, the losing party will appropriately want somebody at the 3rd District Court of Appeals or higher to look at it.”

He said for that reason he will write the opinion and he will do it promptly.

Regarding the second matter, Morrison denied a motion to alter the bond for Vannieuwenhoven and enable him to post bail. The suspect currently is being held in the jail with bail set at $1 million.

The defense, it its motion, argued that Vannieuwenhoven is at greater risk of contracting COVID-19 by being in the jail then he would be in the general public. They pointed out that because of his age, he is eligible to receive the vaccine.

Schuchart said he recently went to visit his client in the jail and was able to make observations. He said because of Vannieuwenhoven’s poor health and advanced age he is neither a flight risk nor a danger to the public.

Schuchart said the county is paying a lot of money to keep the suspect locked up.

“Essentially, it’s a fortified nursing home because there is a locked door some distance away (from the defendant),” he said.

Morrison asked Schuchart what he suggests be done with Vannieuwenhoven. “Should he go home,” the judge asked.

“Yes, or to a nursing home,” Schuchart responded.

Vannieuwenhoven, silent throughout the hearing, blurted, “My dad died in a nursing home, I don’t want to go there.”

Morrison said he doesn’t blame the suspect for feeling that way. He added that protecting Vannieuwenhoven from harming himself is a concern.

Morrow, in her argument, said there is no crime more serious than murder. She also expressed concern about Vannieuwenhoven not following orders or taking his medication if he is away from the jail.

“I would say that where he is in the jail right now is probably more safe than he would be just about anywhere else,” Morrow said. “He is by himself—he’s segregated. He has 24-hour nursing care. His vitals are taken daily.”

Vannieuwenhoven shouted at Morrow, “You don’t know the first thing about that jail.”

Morrison asked Morrow if she believes the suspect is a risk to the public right now, given his mental and physical condition.

“I don’t think that risk is great,” she said.

Morrison asked Sheriff Jerry Sauve if he believes Vannieuwenhoven could get adequate care outside the jail, for instance in a nursing home.

“Your honor, caring for this defendant in our jail, as I’ve testified before in this court, is burdensome to us,” he said, adding that the financial and labor strains are high.

“We’ve looked at the potential for other options here and I’ve come up empty,” Sauve said. “I’ve researched this. I’ve talked to my colleagues across the state and they scratch their heads and say ‘sheriff, you’ve got a new one on us.’”

Morrison then made his decision. “This is not a normal ‘reduce my bail’ motion,” he said. “This is a very unusual case in every respect.”

The judge said COVID-19 is not a factor in his decision. If it was, Morrison said, the defendant is in the safest place he could be.

Morrison said he does not want to send Vannieuwenhoven to a nursing home and he does not believe the suspect could live on his own or with a family member.

“I don’t think that Mr. Vannieuwenhoven poses a risk to others today,” Morrison said, pointing out that when bail was originally set, it was appropriate.

He said that the suspect is the responsibility of Marinette County regardless of the cost. Morrison also mentioned that Vannieuwenhoven is a risk of harming himself because of the seriousness of the charges.

“As it stands now, I think there’s a very strong likelihood that he would be found guilty and I think he knows that, too. ... And that gives him a high incentive to harm himself.”

Morrison denied the motion to reduce bond, but he said if someone can come up with a plan where the suspect would be secure, he would listen to the motion again.