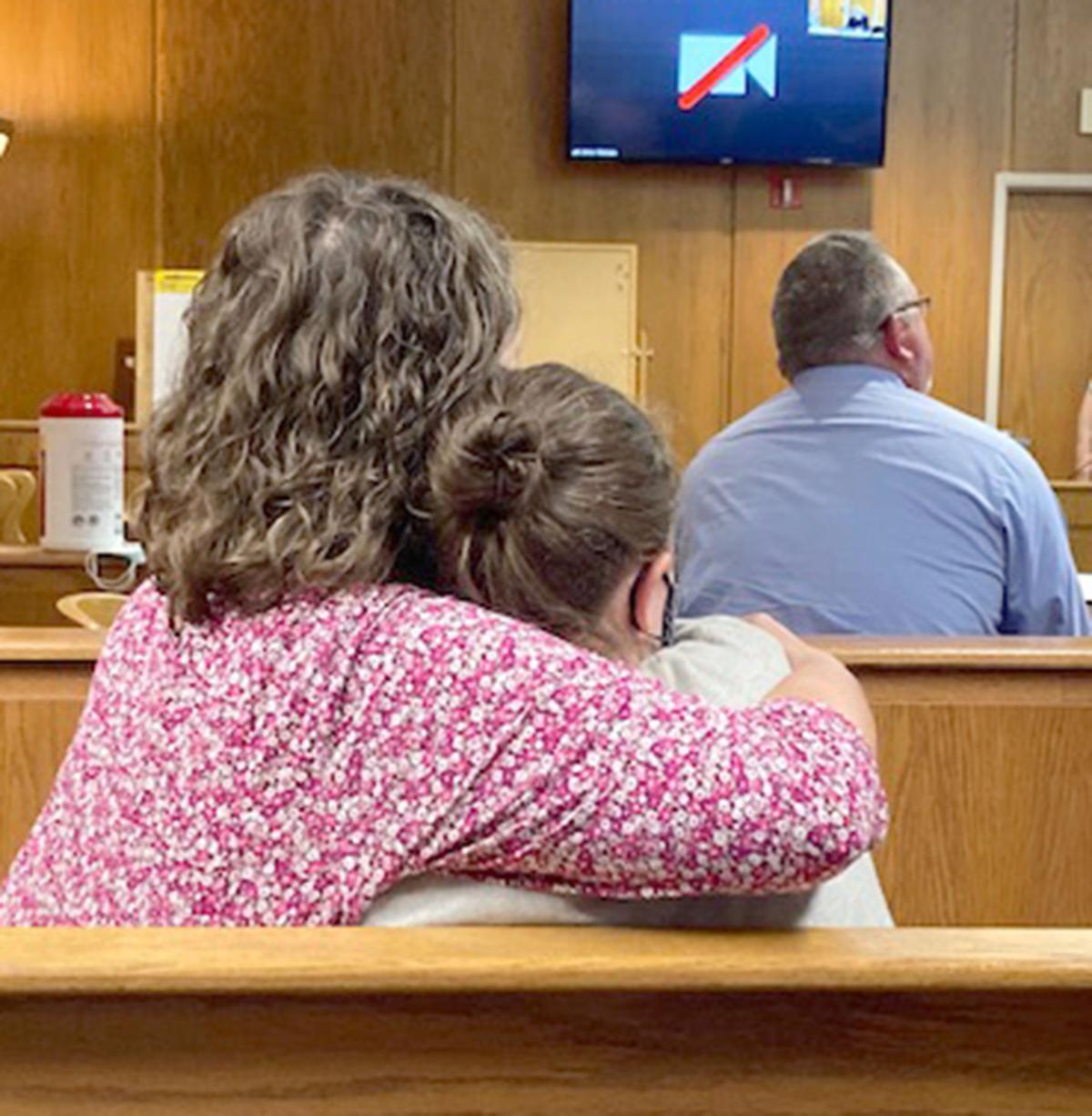 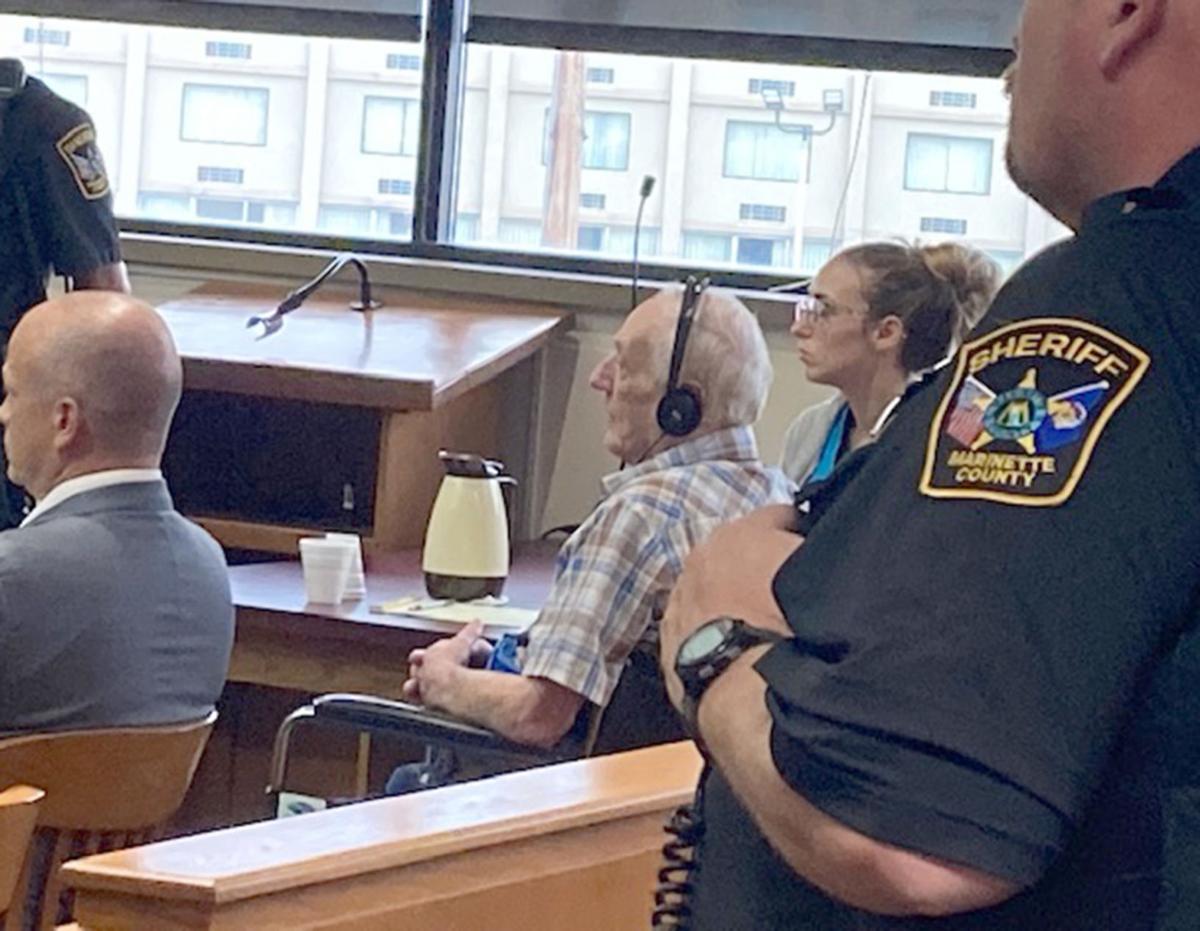 Double murder suspect Raymand Vannieuwenhoven, with headphones, sits as guilty verdicts are read Tuesday in Marinette County Circuit Court. One of his attorneys, Travis Crowell, is at left. 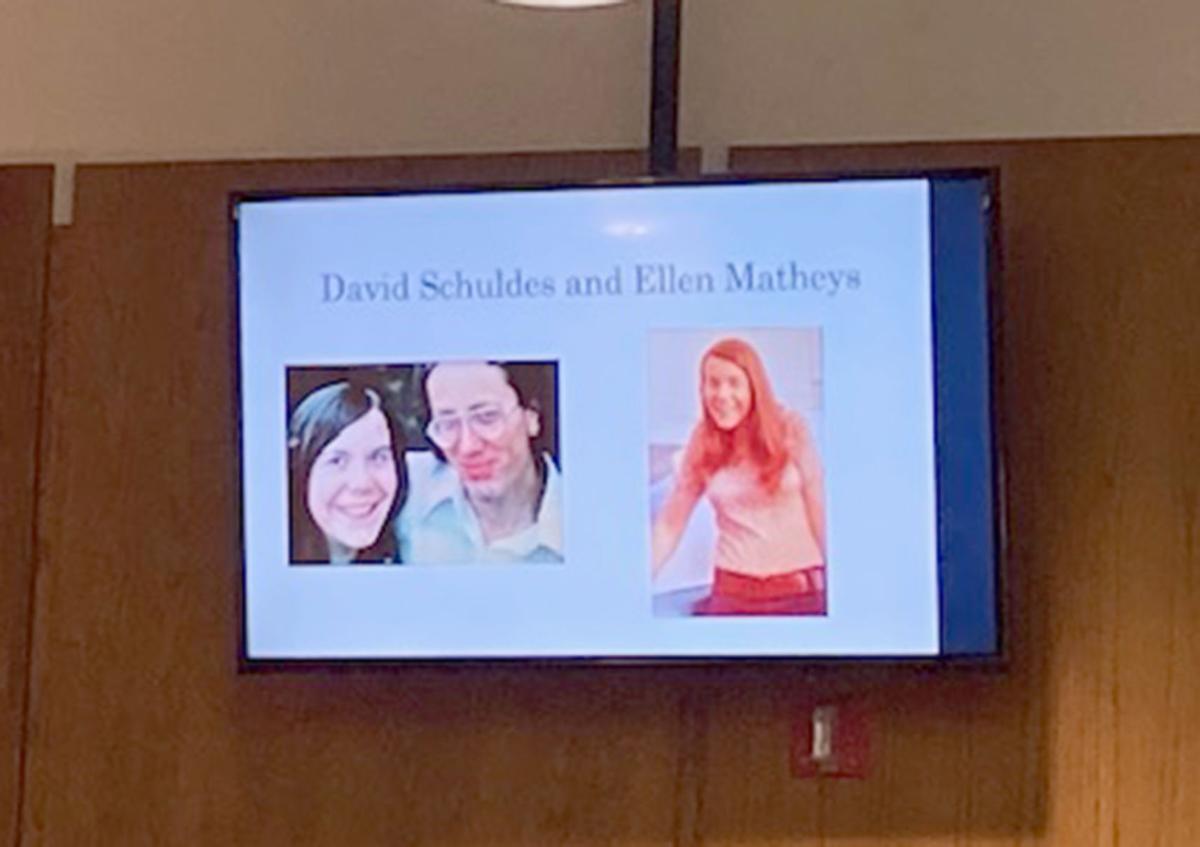 Photos of murder victims David Schuldes and Ellen Matheys are shown Tuesday during closing arguments in Marinette County Circuit Court. An 84-year-old Lakewood man was found guilty of the 1976 murders.

Double murder suspect Raymand Vannieuwenhoven, with headphones, sits as guilty verdicts are read Tuesday in Marinette County Circuit Court. One of his attorneys, Travis Crowell, is at left.

Photos of murder victims David Schuldes and Ellen Matheys are shown Tuesday during closing arguments in Marinette County Circuit Court. An 84-year-old Lakewood man was found guilty of the 1976 murders.

MARINETTE—It took 45 years and 18 days, but the families and friends of David Schuldes and Ellen Matheys believe some level of justice has finally been served.

Schuldes, 25, and Matheys, 24, both of Green Bay, were shot and killed on July 9, 1976, at the McClintock Park campground in the Town of Silver Cliff. Matheys was raped before she was killed. The couple was engaged with a September 1976 wedding planned.

A jury—eight women and four men—found Raymand Vannieuwenhoven, 84, Lakewood, guilty of two counts of first-degree murder Tuesday in Marinette County Circuit Court Branch 2. They deliberated for about two hours. A charge of sexual assault was earlier dismissed because the statute of limitations has elapsed. There is no statute of limitations for the two first-degree murder charges.

The defendant, dressed in blue jeans and a striped button-down shirt, sat stoic in his wheelchair as Judge Jim Morrison read the guilty verdicts.

Per the judge’s orders, the victims’ families were quiet when the verdicts were read. After the jury was dismissed and the trial ended, the family members exchanged firm hugs and joyful tears with attorneys, law enforcement personnel and one another.

“We got justice. We’re very relieved and very thankful to all of the dedicated people that worked on this case for the last 45 years,” said Linda Baumgartner, a childhood friend of Matheys who was to be the maid of honor in her wedding.

Baumgartner, of Green Bay, said she was overwhelmed with emotion by the verdict. “I’m just shaking, just shaking,” she said, adding that in her mind there was no doubt Vannieuwenhoven committed the crimes regardless of the outcome. “There was a long time when I didn’t think this day would come, but I’m sure glad it did. I’m sure glad they (investigators) never gave up.”

Mikulsky said while the verdict gives her personal closure, it does not equate to total justice.

“He took 45 years away from them, when they were just on the threshold of starting their lives (together),” she said. “And 43 of those 45 years he spent going about his business with the freedom to live his life. So is there any amount of equal justice here? No. But we are very happy.”

Mikulsky, who said she felt her brother “here with me,” admitted she had given up on this case quite a few years ago.

The Marinette County Sheriff’s Office, led by Det. Todd Baldwin, Sheriff Jerry Sauve and many others, didn’t give up and they refused to label the matter a cold case.

“It took a lot of patience, persistence, but all-in-all we just waited long enough to get the right kind of technology to find this guy,” Baldwin said. “He never came up in any of our reports before. Nobody’s ever talked to him before. I’m elated that this individual is going to pay for what he did.”

Vannieuwenhoven was arrested in March 2019, shortly after his DNA matched that of evidence (semen) found on the jean shorts of Matheys and preserved since 1976. In 2018, the sheriff’s office began working with Parabon Nanolabs of Virginia, which had developed new technology to use genealogy when testing DNA. That genetic testing narrowed the evidence profile to a Vannieuwenhoven family in Green Bay. Detectives eliminated matches one-by-one until Raymand Vannieuwenhoven’s DNA was a perfect match.

“It’s highly doubtful that if we didn’t go with the technology that we went with that he was ever going to be brought to justice,” Baldwin said.

A DNA advanced analyst testified Monday that the odds were extremely great that the defendant’s DNA was a match to the evidence profile. Rebecca Bohr of the Wisconsin State Crime Lab said there was a one in 18 sextillion chance (that’s an 18 followed by 21 zeroes) that it could be anyone else’s DNA.

Baldwin said he felt confident before and during the trial. “It’s hard to refute this evidence,” he said. “It’s definitely him. He was definitely there and unfortunately these two young people at the time lost their lives.”

The detective praised the work of the attorneys, as well as everyone in the sheriff’s office who worked on this case from 1976 to today.

“A lot of people put a lot of time and effort into this,” he said. “It’s kind of been our white whale in Marinette County for a long time. It’s kind of nice to put him to sleep.”

Marinette County District Attorney DeShea Morrow said her biggest take from the verdict was relief for the victims’ families.

“I know what they’ve gone through for 45 years,” she said. “Just having this horrible thing happen to their family and not knowing and then just living through the last two years with this—just immense relief and then gratitude for all the people that have worked on this case over the years.”

Morrow said the prosecution was confident in its case, especially because of the DNA evidence. She said the number of tests done by the Crime Lab ensured they had the killer.

“With the evolution of DNA technology, there have been more cases like this that have been able to be brought to trial and verdicts received,” she explained, adding that the DNA had to be authenticated and validated with strong evidence to show that it is reliable.

The state had the assistance of two special prosecutors in the case—Mark Williams and Norman Gahn.

Williams heaped praise on Morrow and others.

“She was tenacious, she wouldn’t give up on this case,” he said. “She is a very, very talented district attorney and I think the people of Marinette (County) are lucky to have her. I also commend the sheriff’s department—what a fantastic job they did. They never gave up and they did something a lot sheriff’s departments wouldn’t do and that’s take the extra step with the genealogy.

“So it was a pleasure and a privilege to work on this case and justice has finally been done.”

Lee Schuchart and Travis Crowell led the defense team. Schuchart said because sentencing and possibly post-conviction motions are still in play he could not comment on the verdict.