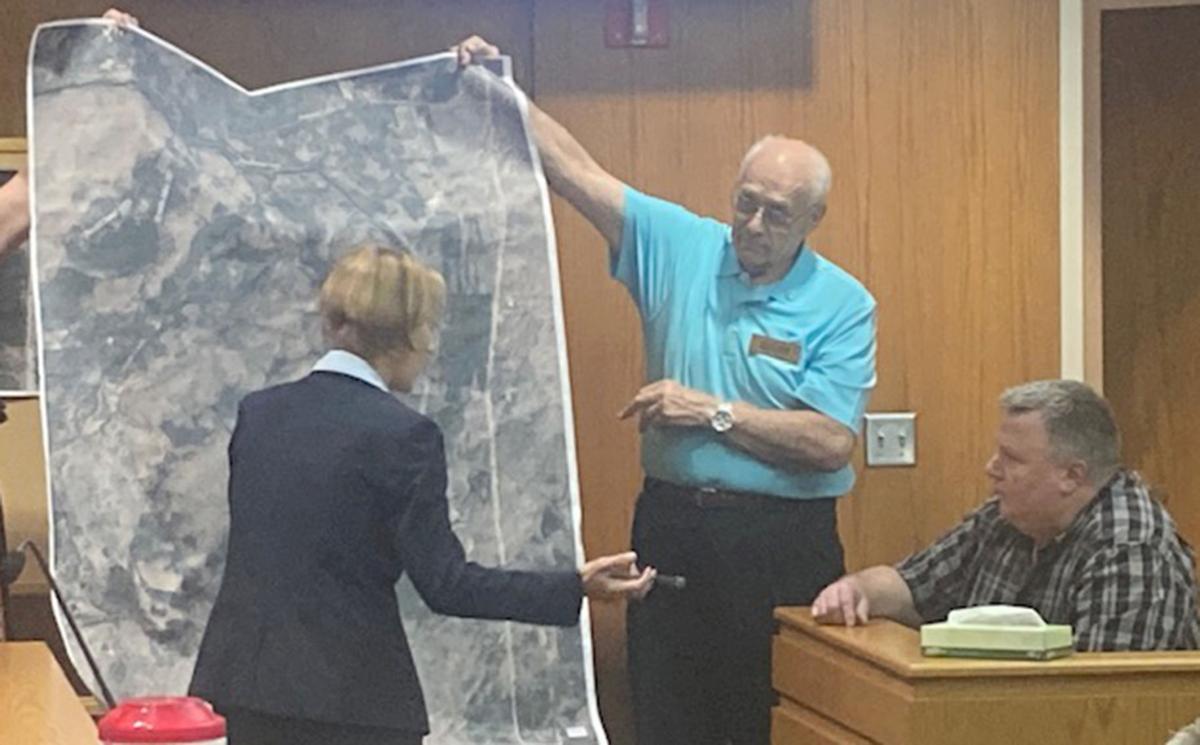 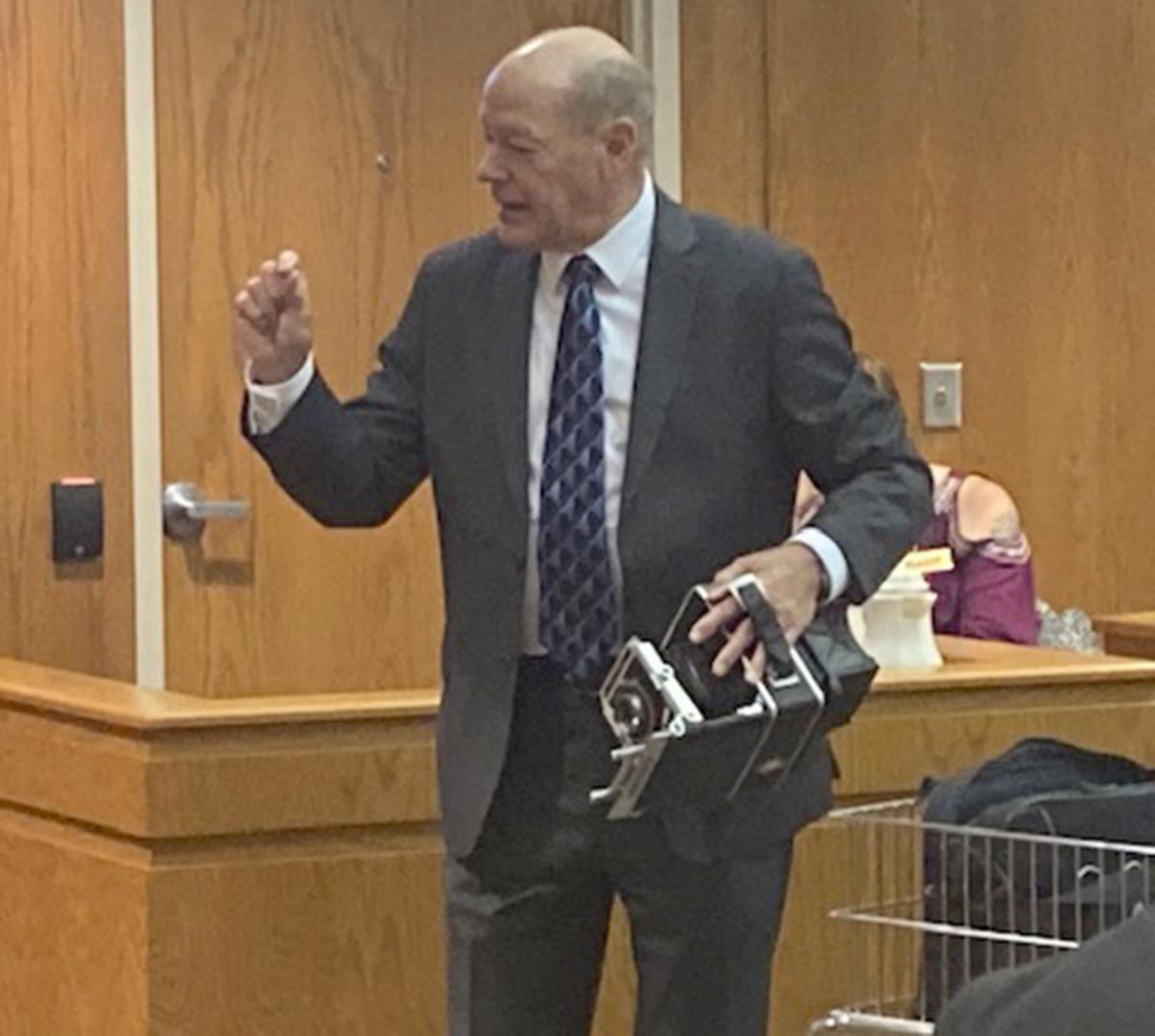 Patrick Lutz, a retired employee of the Wisconsin State Crime Lab, demonstrates to the jury how an old Super Graphic 4x5 camera operates Wednesday in the double murder trial of Raymand Vannieuwenhoven. 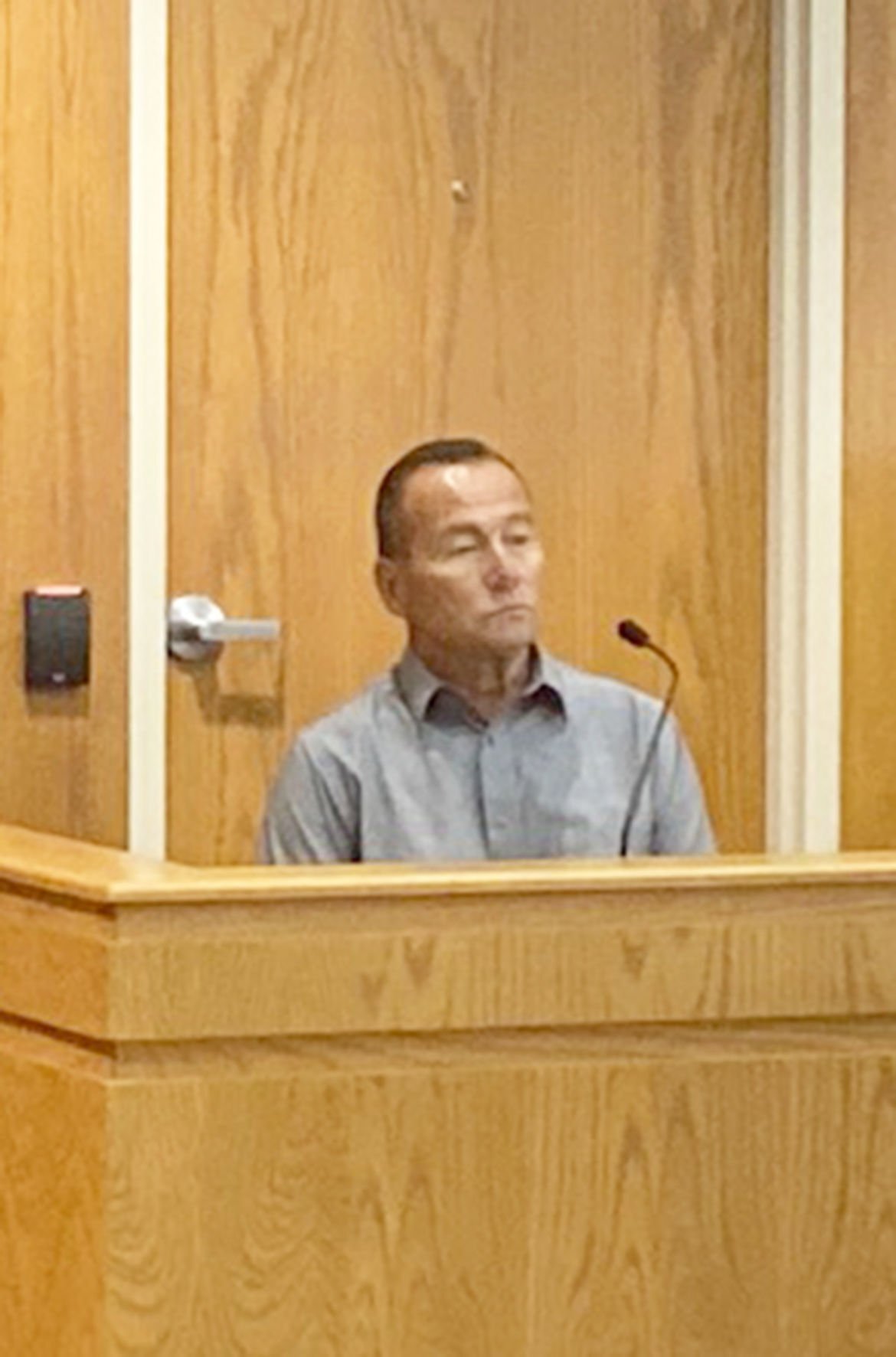 Robert Swanson testifies Wednesday in the double murder trial of Raymand Vannieuwenhoven. Swanson and a friend saw someone holding a gun and walking down the road the day after the killings in 1976.

Patrick Lutz, a retired employee of the Wisconsin State Crime Lab, demonstrates to the jury how an old Super Graphic 4x5 camera operates Wednesday in the double murder trial of Raymand Vannieuwenhoven.

Robert Swanson testifies Wednesday in the double murder trial of Raymand Vannieuwenhoven. Swanson and a friend saw someone holding a gun and walking down the road the day after the killings in 1976.

MARINETTE—One of two witnesses who saw a man walking from a double murder crime scene testified Wednesday in Marinette County Circuit Court. The other witness was served a subpoena in Idaho by order of Branch 2 Judge Jim Morrison.

The double murder trial for Raymand Vannieuwenhoven has had two solid days of testimony—Tuesday and Wednesday—as the state continues through its witness list. They include childhood friends of both victims, a person who was camping near the crime scene with his family and a handful of current and former law enforcement personnel and investigators.

Vannieuwenhoven, 84, Lakewood, is accused in the 1976 murders of a Green Bay couple who was camping at McClintock Park in the Town of Silver Cliff. David Schuldes, 25, and Ellen Matheys, 24, were shot and killed at the campground. They were engaged.

During Monday’s opening statements, both the state and the defense mentioned a pair of eyewitnesses—Robert Swanson and Kim Huempfner—who were walking at the McClintock Park recreational area (near the camping ground) July 9, 1976, when they heard a gunshot between 2 and 2:30 p.m. The men got in their car and while driving south on Parkway Road, they saw a man walking down the road carrying a rifle in his left hand, according to the state.

Swanson, who lived in Goodman in 1976, took the witness stand Wednesday. He said he and his friend Huempfner, of Pembine at the time, decided to take a drive on a beautiful July day.

Special Prosecutor Mark Williams asked Swanson, a hunter, if he could recognize the gunshot.

Swanson testified he and his friend, who was driving, got in their car and headed south on Parkway Road, toward the McClintock Park campground.

“Then something happened, “ Williams said. “What did you see?”

“Just past the campground I saw a man on the right walking with a rifle,” Swanson said. He said the man was “taller” with “longer” dark hair and was wearing a white or off-white shirt.

Williams asked Swanson if it was unusual to hear a gunshot in July, when it’s not hunting season. Swanson said it’s not totally unusual because there are people who poach.

“We just took it as somebody poaching,” he said.

He also testified that he and his friend saw a car backed in off the left side of the road opposite to the direction the man was walking. He described it as blue with Michigan plates.

Swanson said he watched the television news in the evening July 10, 1976, and that is when he learned of the suspected murders. Both he and Huempfner decided to contact law enforcement to tell them what they saw, he added.

Æ Co-defense attorney Lee Schuchart informed the court that Huemphner was served his subpoena Wednesday morning. He said he will keep everyone updated on the status of getting the witness in the courtroom.

Humphner lives in Idaho where he works for the Department of Security. The state said the potential witness has told them he cannot get off of work. On Tuesday, Morrison ordered both sides to get Huemphner in the courtroom to testify.

Shortly after lunch Wednesday, Schuchart filed a motion for a mistrial. He said when District Attorney DeShea Morrow was going through her PowerPoint presentation during questioning of a witness, a graphic autopsy slide of Schuldes was on the screen for several seconds.

“It was a pretty disturbing photo and it’s something that the jury saw and it’s not marked as an exhibit,” Schuchart said.

Morrison said he saw the photo at the time and he made a mental note to discuss it with the attorneys. It is not entered as an exhibit as of yet and it was only shown for at most 10 seconds, the judge said.

Morrow said the mistake happened because of a technical malfunction with her computer and as soon as she saw her slide show cycling through all her photos, she disconnected it.

He said the court would do more harm than good by reminding jurors of the image. “That is a good way to re-ring the bell as loudly as we can,” he said.

Schuchart said inadvertent or not, the jury was exposed to a very graphic photo. Morrow countered that the photo will be introduced as evidence later in the trial, plus, she said, this is a murder trial and the jury will see autopsy photos.

Schuchart made a motion for a mistrial and Morrison swiftly denied it. He said the photo is not any more disturbing than some of the other photos that have already been admitted.

The state’s first two witnesses on Tuesday were childhood friends of the victims. Lynn Baumgartner of Green Bay said she knew Matheys since they were young. She called her “Ellie.”

“We were best friends since the ninth grade,” Baumgartner said. “She was like the sister I never had.”

Baumgartner, who attended Green Bay East High School and UW-Green Bay with Matheys, said she was supposed to be the maid of honor in her and Schulde’s wedding in the fall of 1976.

The witness described Matheys. “She was an excellent student,” Baumgartner said. “She was always quiet, reserved—I would consider her an introvert, intelligent, soft-spoken. Just an overall real nice person.”

Æ Steven Mommaerts of Green Bay, the state’s second witness, was a good friend of Schuldes. He said they met in Green Bay West High School and they became very close. They also went to UW-Green Bay together.

Mommaerts described Schuldes as a great golfer and an overall good athlete who went out of his way to be nice to others. As an example, the witness said he suffered a brain hemorrhage that caused one eye to droop and while most people avoided him, Schuldes sought him out to talk about the issue.

“He wanted to know what part of the brain it happened in and how it affected me,” Mommaerts said. “It made me feel good to talk about it—he treated me like a regular person.”

Mommaerts said his wife answered a phone call the morning of July 10, 1976, informing her that Schuldes and Matheys were dead. He said he was sleeping, but his wife told him about the horrific news.

“It felt like I was hit in the chest by a sledgehammer,” Mommaerts said. “I was in a daze.”

Other witnesses on Wednesday

Æ Marinette County Sheriff Jerry Sauve testified that in 2001, the 25th anniversary of the crime, the department made a push to get the case back in the public eye. Sauve, a lieutenant investigator at the time, along with a state agent, interviewed Swanson and brought him back to the crime scene.

“We wanted to talk to him again and see if he had any further recollections since,” Sauve said.

Æ Patrick Lutz and David Bartel, both retired employees of the State Crime Lab, testified about their investigation work in the case.

Other witnesses on Tuesday

Æ Patrick Fields of Montello, Wisconsin, testified that he was at the McClintock Park recreational area with his parents and brother July 9, 1976. He said he was just 11 years old, but he recalled seeing Schuldes’ purple Gremlin at the campground. He also recalled seeing a gray Plymouth parked on the shoulder of the road.

Æ Lance Timper of Marinette was a Marinette police officer in 1976. He said he and his girlfriend, now his wife, were on a “joy ride” July 9, 1976, and the excursion took them to McClintock Park. He recalled how a park caretaker told him of a male body (Schuldes) laying by the restrooms.

“There was a man laying on the ground,” Timper said. “He had blood dripping out of his nose and underneath him. His face and hands were turning blue. He had no pulse.”

Timper said the caretaker went to nearby Goodman Park to call 911, while he secured the apparent crime scene until rescue and law enforcement personnel arrived.

Co-defense attorney Travis Crowell asked Timper how many shots he heard when he and his girlfriend were looking for blueberries in the recreational area at McClintock Park. Timper wasn’t sure, but he said it could have been more than one.

The prosecution has stated Schuldes was shot once in the neck and Matheys was shot twice in the stomach.

Æ Former Marinette County patrol deputy James Jerue testified as to what he observed at the crime scene, while former dispatcher Connie Winchell testified about the 911 call she received about the crime.

Æ Retired Chief Deputy Robert Kohlman, who assisted in the investigation in 1976, also testified. It was under cross-examination by Schuchart when the topic of Huemphner, one of the eyewitnesses, came up.

Schuchart was seeking information from Kohlman and Morrow argued it was hearsay. The judge agreed.

“You’re trying to get that information in front of the jury through somebody else’s reports, which is the essence of hearsay,” Morrison said. “You’ve got to have somebody in the chair to cross-examine. You’re trying to avoid that and that’s not going to happen.”

Schuchart said he wasn’t trying to avoid anything. He said transcripts of the interviews with Huemphner are available.

Editor’s note: Trial coverage from Thursday and Friday will be in Monday’s EagleHerald and on ehextra.com

The double murder trial of Raymand Vanniewenhoven entered its second day Tuesday with testimony from close friends of the victims and former law enforcement personnel.