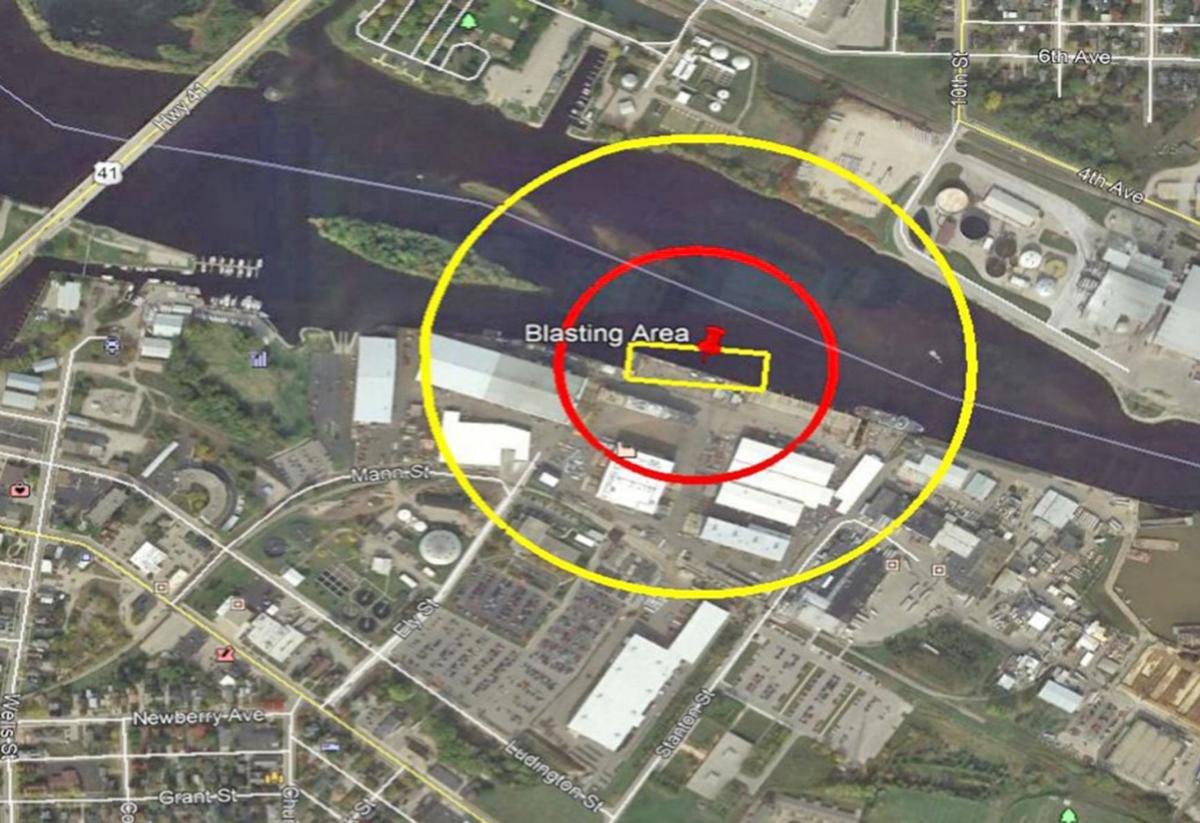 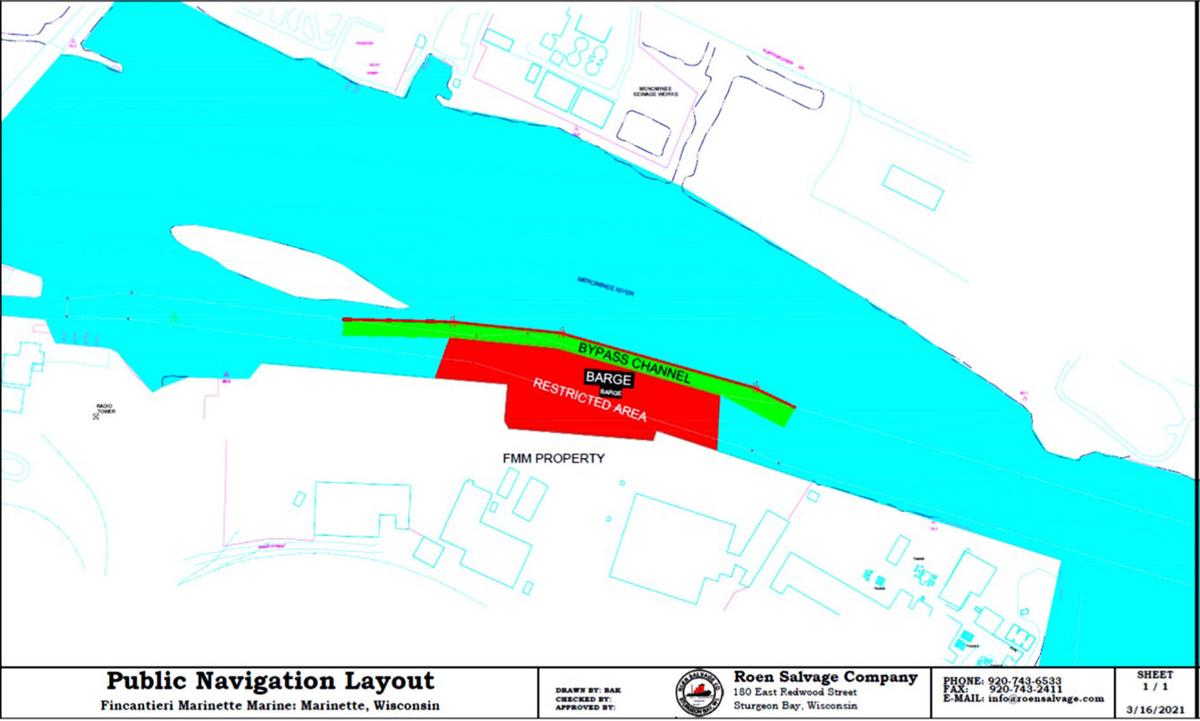 Restricted Zone: “Boats may pass on the north side of the barges without going beyond the red channel buoys, so (boaters) do have safe passage as we go through our 24/7 operation.” —Jan Allman, CEO of Fincantieri Marinette Marine. 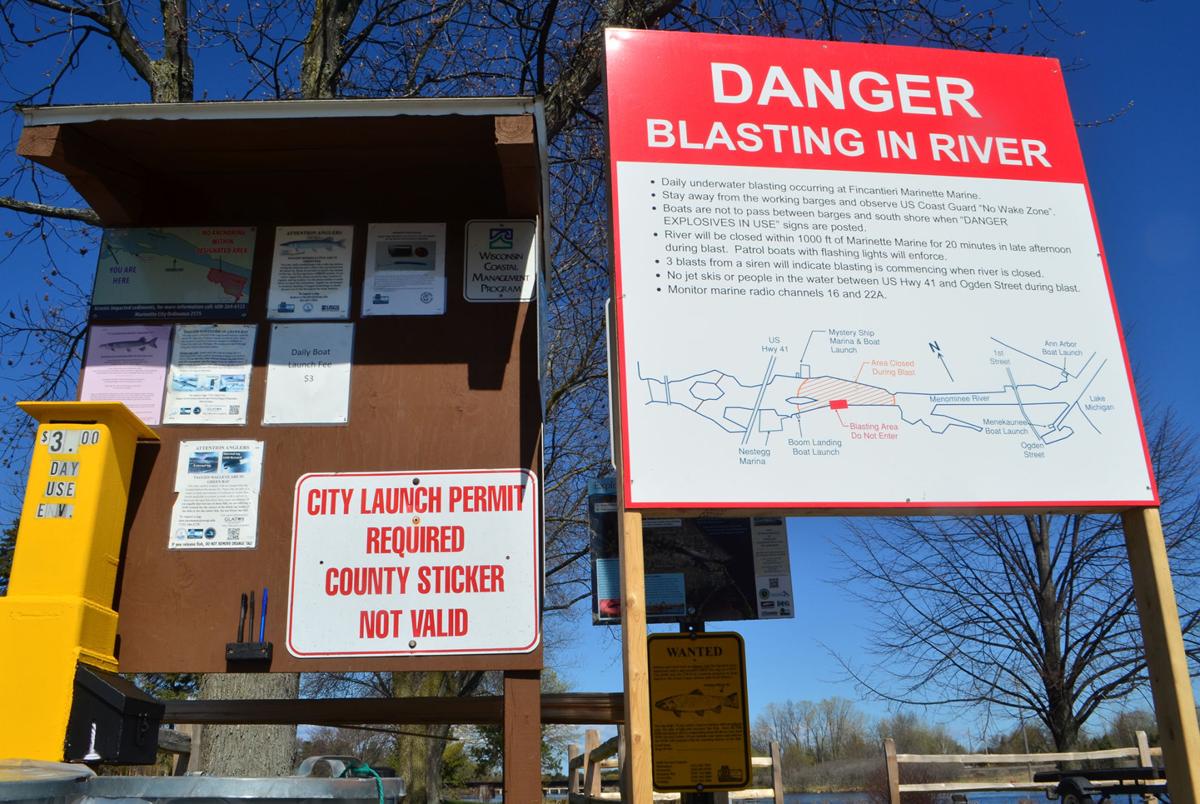 Already posted on Thursday at the Stephenson Island boat launch, this sign regarding the FMM blasting work that commences next week in the Menominee River, informs boaters of various safety precautions and restrictions that will be enforced between the Ogden Street Bridge and the Interstate Bridge. Other informational signs will be posted throughout the area.

Restricted Zone: “Boats may pass on the north side of the barges without going beyond the red channel buoys, so (boaters) do have safe passage as we go through our 24/7 operation.” —Jan Allman, CEO of Fincantieri Marinette Marine.

Already posted on Thursday at the Stephenson Island boat launch, this sign regarding the FMM blasting work that commences next week in the Menominee River, informs boaters of various safety precautions and restrictions that will be enforced between the Ogden Street Bridge and the Interstate Bridge. Other informational signs will be posted throughout the area.

MARINETTE—To ensure the public safety and the fluidity of operations for a project that entails blasting and dredging activities along a portion of the Menominee River just off the shipyard’s shoreline, Fincantieri Marinette Marine (FMM) Chief Executive Officer Jan Allman briefed City of Marinette officials on project details Tuesday night during the Common Council meeting.

For the most part, the river will remain open for normal activities with the exception of restricting certain areas over short and daily recurring spans of time on weekdays. Those restrictions put limits on when and where boating, fishing, swimming and other activities can occur in relation to the project activities.

Allman’s presentation detailed the timing and safety implementations to ensure the well-being of those who use the river recreationally as well as assurance that the operations will not significantly influence daily river routines and leisure activities upon which a portion of Marinette tourism relies.

The project officially began in April, focusing mainly on initial dredging work. However, starting next week, work transitions into underwater blasting operations of the bedrock base in the Menominee River at a location just off the shipyard’s riverfront. The production schedule slates the initial test blast for some time between Monday and Wednesday followed by the first production blasts, tentatively on Thursday. Allman anticipates active blasting operations to continue Monday through Friday through the summer and into the first part of the fall, ending Oct. 21.

Among those safety measures, several location-specific river restrictions will be enforced for a short time each day. Additionally, overarching general operational and site-specific restrictions will persist throughout the duration of the large project.

The blasting work will generally commence between 4 and 5 p.m each weekday. While blasting operations proceed, the river will remain closed within 1,000 feet of Marinette Marine for approximately 20 minutes each day, or while workers ensure that safe passage through the river can resume (see Safety Zone map).

Additionally, Allman emphasized that during each 20-minute blasting period, swimming and jet ski activities will not be allowed in the river between the Ogden Street Bridge and the Interestate (US 41) Bridge.

A barge positioned in the work zone will issue a warning signal to alert anyone in the vicinity of the forthcoming blast five minutes prior. This warning will consist of a one-minute series of long audible tones. Then, one minute prior to the blast, a series of short audible signals will be emitted. Once the blast is completed, workers will inspect the area for integrity and safety before sounding a prolonged “all clear” signal.

While the blasting operations and associated river restrictions and closures related to the project occur only at specific times each day, the project’s dredging and other activities continue on a 24-hour timetable. For this reason, FMM has implemented a specific restricted zone that includes a safe “bypass channel” (see Restricted Zone map) for boaters traversing up or downriver.

“We will be drilling and blasting in the daylight hours only,” Allman said. “Excavation will take place at night and on weekends.”

Essentially, the complex operation seeks to remove several inches of the bedrock, effectively increasing the river depth in that area to allow for the safe launch and navigation of the new and larger line of advanced Constellation Class Frigates (FFG-62). In April of 2020, the U.S. Navy awarded FMM the frigate contract, which promises to boost the area’s economy and employment opportunities. Additionally, the work will also facilitate the construction of a large device called a “syncrolift” that is capable of gently lowering the more massive ships into the water, as the shipyard moves away from the side launch method. The FFG-62 measures up and weighs in at 496 feet in length with an estimated displacement of 7,400 tons, according to a Congressional Research Service report on the FFG-62 program background for the U.S. Congress.

The construction work presently underway, both in the river and throughout the shipyard complex, serves as part of an over $200 million capital expansion by which FMM will augment, expand and renovate various facilities and equipment at the shipyard to accommodate the construction of the new frigates.

Allman also touched on the minimal impact the project imparts on the surrounding environment.

Addressing concerns of potential decibel levels produced by the blasting, she explained that individual blast noise will likely reside at levels below the current hubbub of production work underway further in-shore within the shipyard complex. From the surface, a single underwater blast appears and sounds relatively low-key, according to a video of similar blast operations posted on the FMM Construction Update website. On the Menominee River, unless directly observing the blast, each detonation should go unnoticed to area residents.

“We don’t anticipate that anyone will notice anything different,” Allman informed the council.

Additionally, during blasting and dredging, several methods will maintain the welfare of fish and other underwater wildlife as well as reducing the level of excess sediment created by the work.

Through the use of a specialized preventative measure known as a “bubble curtain,” work crews will pump pressurized air through a series of underwater tubes running along the river bed and around the perimeter of the blast area. As the name implies, the pressurized air creates a thick wall of bubbles that discourage fish migration through the blast area, controls water turbidity and lowers blast pressure.

“The project has been authorized by the Army Corps of Engineers and the Wisconsin Department of Natural Resources,” Allman said, adding that such blasting techniques represent routine procedures used by similar harbor projects to increase the depth of the water.

Finally, to maintain public awareness and ensure that safety remains the priority, FMM conducted thorough dissemination of project information throughout the area at businesses and to individuals associated with leisure and other river endeavors. That information contains details on safety measures and the timing of weekday blasting operations and associated water activity limitations throughout the duration of the project.

Additionally, informational signs will be posted at boat launch ramps and marinas by today and remain throughout the project. Detailed information on project activity, purpose and safety measures may also be accessed on FMM’s website by following this link: https://fincantierimarinettemarine.com/construction-update/

“We’ve also brought information to the local tackle shop and anywhere else that we think we would see boaters,” Allman said. “We have done mailings to people (who use) the marina to make sure that they are fully aware of what is happening and the times of when it actually occurs.”

Moreover, during Memorial Day, the observation of Independence Day (July 5), Labor Day (Sept. 6) and Thanksgiving Day, project activity will cease. Also, non-work days will also coincide with big events such as fishing tournaments on the Menominee River. At this time, blasting operations are not scheduled to take place during weekends.