Protesters listen to Scott Behrmann, a constitutional activist from Neenah, speak Thursday at the rally. 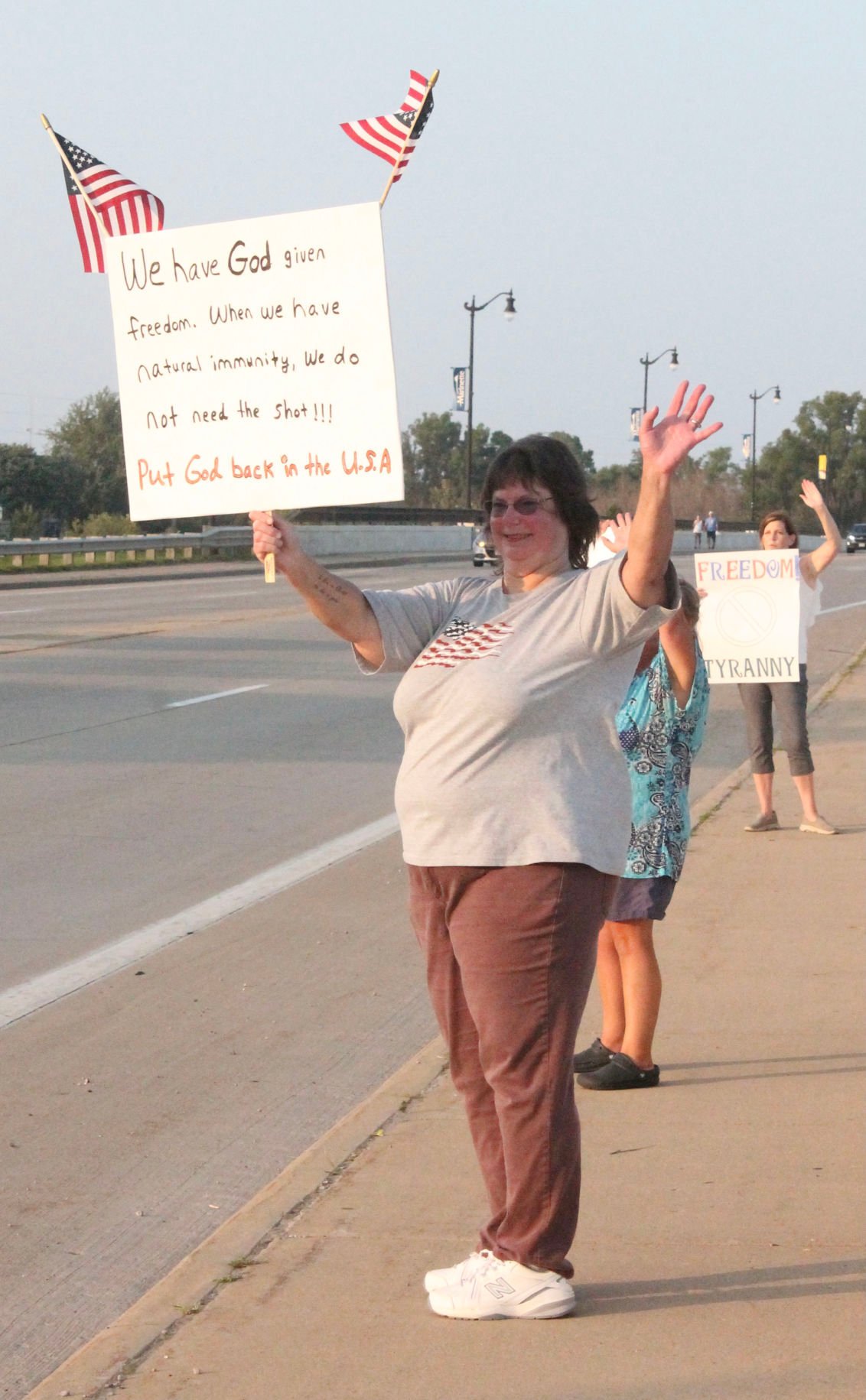 Bobbi Jo Bruno holds up her sign at the protest against Advocate Aurora Health’s recent mandate requiring employees to be vaccinated against COVID-19.

Protesters listen to Scott Behrmann, a constitutional activist from Neenah, speak Thursday at the rally.

Bobbi Jo Bruno holds up her sign at the protest against Advocate Aurora Health’s recent mandate requiring employees to be vaccinated against COVID-19.

MARINETTE—Protesters gathered on the Stephenson Island bridge Thursday to oppose Advocate Aurora Health’s Aug. 4 mandate requiring all employees to be vaccinated against COVID-19. Employees in the network must be fully vaccinated by Oct. 15.

There were about 20 people gathered a quarter before five in the Stephenson Island parking lot. I approached a short-haired older woman and asked her what was going on. She declined to share her name but introduced me to an older man in a straw hat and a woman with curly hair, both of whom work at the Aurora Medical Center in Marinette and asked not to be named.

“We’re already on the chopping block,” said the curly-haired woman.

“What we’re here for is just to let people know that we want to be free to make our own choice,” the woman continued. “It’s not just about the shot. It’s about freedom. We want to be able to consent. You have to respect autonomy, so why can’t they respect us?”

She said she heard of managers in other departments going around asking people if they are vaccinated but added that her manager is “hands-off” on the topic.

The man in the straw hat interjected—“I work in a different department, doctors think we’re crazy. But from what I understand, they’re getting a kickback.”

A young woman with a stars and stripes bandana tied around her neck came over. She also works at the Aurora Medical Center in Marinette. The woman declined to share her name or role at the hospital but said she works directly with patients.

“All of us are very scared, especially because it’s such a small hospital,” she said. “People at the hospital have fertility concerns, like breastfeeding, trying to get pregnant, and we just feel like we’re being gaslit.”

A tall man with dark sunglasses walked up and asked the woman with curly hair where she wanted to set up the rally. The man later identified himself as Scott Behrmann, a constitutionalist activist from Neenah who frequently travels to rallies around the state.

Behrmann left, and I asked the woman with curly hair what she plans to do if she doesn’t get an exemption from the vaccine. “I will be fired on October 15,” she responded. “But the more that I see, I have a really hard time letting my face be known with an organization like mine, and so I don’t know if I’ll make it to Oct. 15.”

The protesters began walking out of the parking lot. There were more people now, and as they reached the bridge, they fanned out and took their places along the road, some crossing to occupy the other side. Behrmann started blasting “Rockin’ in the USA” through an amp he had set up on the grass in front of the Logging Historical Museum. Cars drove by, honking frenetically.

The young woman with the bandana was standing with her sign further along the bridge toward Menominee and away from the music. She is married and undergoing fertility treatment, which she said allows her temporary exemption from the mandate.

“But it’s only a delay,” she said. “I think the vaccine is rushed, and I’m concerned about long-term unknowns.”

The cacophony of honking cars made it difficult to hear her.

“Here’s another thing,” she continued, “before the mandate, I could walk around the hospital and have a respectful rapport with my colleagues, but the minute that mandate happened, all the sudden my coworkers that are vaccinated got way more bold and passive aggressive with their comments.”

Alexis said she hasn’t requested an exemption yet but plans to do so for medical and religious reasons.

“I don’t know what I’m going to do if it’s not approved, I honestly don’t know,” she said.

Farther down the line of protesters, Menominee resident Gina Zdeb stood holding a sign next to her 27-year-old son, who asked not to be named. Zdeb is retired, and her son is an engineer at the Fincantieri Marinette Marine shipyard.

“I am here for the children. My kids are grown, I don’t have to worry about my children except for their jobs,” she said. “This is taking away our rights, you give them an inch and they will take away everything.”

Behrmann walked up and held out his phone for a selfie. Zdeb and her son huddled closer to him and smiled at the camera.

“This mandate is taking away our rights,” Zdeb continued after Behrmann left. “Just like the women and the pussyhats. They have a choice and we do too.”

Zdeb was referring to the Pussyhat Project protesters who wore pink beanies as a symbol of solidarity during the Women’s March on Washington following former president Donald Trump’s inauguration.

The sound of Behrmann testing a microphone interrupted the music. He asked everyone to gather back on the lawn. I stood off to the side next to a bench where the young woman with the bandana had taken a seat.

“Hey, my name’s Scott,” Behrmann said, pacing around. “I’ve been an activist for quite some time now. I became an activist because I got stuck in a Black Lives Matter rally, and they started beating on my car, and I said no, I ain’t gonna do this anymore.”

“About 25 patriots came out there, well-armed like we should be,” Behrmann said to cheers from the crowd (he had a firearm strapped to his waist). “We protected GOP headquarters that night.”

The young woman with the bandana stood up and leaned toward me—“I have no idea who that guy is,” she said.

I texted her after the rally asking why she had clarified this.

“Scott made some comments that were more political. Right-leaning,” she responded. “Myself and some others had said beforehand that this wasn’t about politics or Right versus Left. This was about our right to make our own medical choices. I shy away from politics in relation to this mandate because, in my opinion, that creates more division. I can see why politics is getting involved, but this affects people from both sides of the aisle.”

Behrmann led the crowd in the Pledge of Allegiance, then invited a woman to take the microphone and sing “God Bless America.” Everyone grew quiet.

A little girl wearing pink Crocs and tie dye shirt and shorts watched in rapture. Protest signs arced around the woman like sentinels: COERCION IS NOT CONSENT! MY BODY, MY CHOICE! FREEDOM IS OUR RIGHT, FOLLOW SCIENCE!

Bobbi Jo Bruno of Stephenson was standing on the other side of the bridge, holding a sign with two American flags sticking out like antennas from its corners. She said she got sick while in her hunting shack on the first day of deer season. She tested positive for COVID and stayed in the hospital five days. “I thought I was gonna die,” she said.

Bruno chose not to get the COVID vaccine. She supports vaccines but doesn’t support making them mandatory.

“I’ve gotten some middle fingers,” she chuckled, watching the passing cars, “Maybe about five of them.”

The protesters petered out after 7 p.m. The man in the straw hat and the curly-haired woman walked to the end of the bridge toward Marinette with some others, holding their signs up high and casting long shadows in the waning light. A large black car with two American flags whipping in the wind honked in a frenzy as it sped past, inciting their cheers.