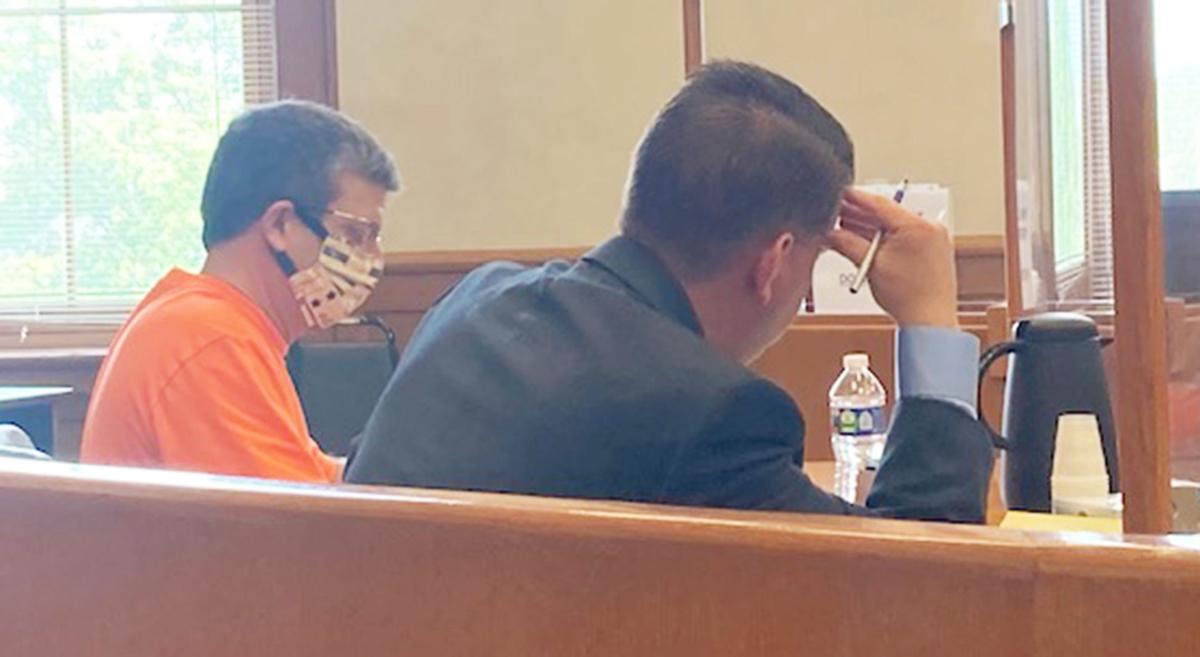 Brian W. Helfert, left, sits with his attorney, Trenton Stupak of Escanaba, during a preliminary examination Friday in Menominee County District Court. Judge Robert J. Jamo will rule today if Helfert will be bound over for trial. He faces a variety of charges regarding alleged sexual relations with a minor. 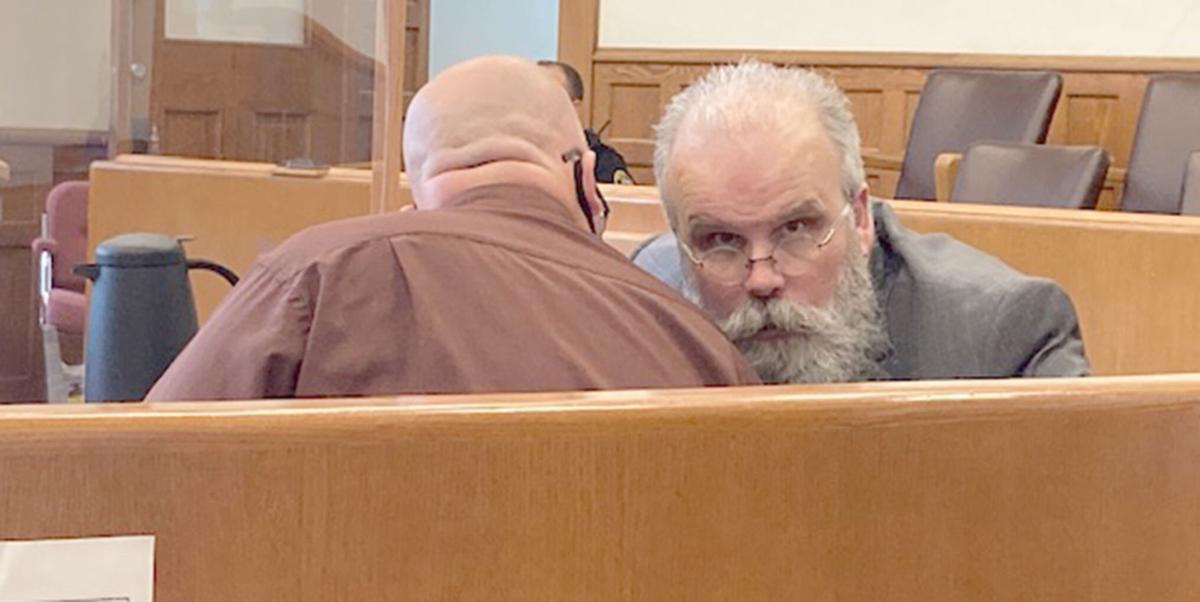 Brian W. Helfert, left, sits with his attorney, Trenton Stupak of Escanaba, during a preliminary examination Friday in Menominee County District Court. Judge Robert J. Jamo will rule today if Helfert will be bound over for trial. He faces a variety of charges regarding alleged sexual relations with a minor.

MENOMINEE—A 23-year-old Menominee man Friday told how former law enforcement officer Brian Helfert befriended him and allegedly carried on a six-year sexually abusive relationship with him during his teens.

He told how the former deputy allegedly groped him in his squad car during “ride alongs” while out in the county and on a police boat during the city’s Waterfront Festival and how Helfert and he allegedly had sexual relations dozens, if not hundreds, of times in a spare bedroom of Helfert’s Menominee home.

The young man’s mother testified how her son would come back from a visit to Helfert’s house and lay on the floor of the shower crying.

The man and his mom were the only witnesses to testify Friday during a preliminary examination for Helfert in Menominee County District Court. The EagleHerald does not print the names of possible sexual assault victims without their consent.

After about four hours of testimony, District Judge Robert J. Jamo said he will make his ruling Monday on whether Helfert will be bound over for trial in Circuit Court. A preliminary examination is a sort of mini trial, where the prosecution is required to show that there is probable cause that the charged crime was committed and that it is more likely than not that the accused committed that crime.

Helfert is currently serving a six-month jail sentence in Ontonagon, Michigan, after previously pleading guilty to attempted accosting of a teenager for immoral purposes. He was arrested last month on an 11-count felony complaint regarding alleged incidents with another boy.

The 23-year-old man was on the witness stand for about two hours Friday. He said he met Helfert through relatives in 2013 when he was 15 years old. He said it didn’t take long for he and the then sheriff’s deputy to start a friendship.

He said Helfert suggested he enter the department’s ride-along program to help him learn how to be a police officer.

The witness described the first time Helfert allegedly touched him inappropriately over his pants when he was at the defendant’s house in Menominee.

Menominee County Prosecuting Attorney Jeffrey Rogg asked how that made him feel.

“I was very uncomfortable, but I just let it happen,” he said, adding that he didn’t want to leave for fear of upsetting Helfert or his own family.

“This was very personal and I didn’t want my family to own that and judge me,” the witness said.

Eventually, the alleged victim said the physical contact happened more often and became more involved. The man explained how Helfert had a wide variety of “sex toys” he kept in a spare bedroom and he graphically explained in detail how he and Helfert used them on each other. He said Helfert had what appeared to be an ordinary board game, but when you rolled the dice, each number was associated with a different sex act.

Rogg, preferring to call the acts sexual assaults, asked the man why he kept going back to Helfert’s house. “I wanted to be a police officer and I felt he was the one who could help me do that,” the witness said.

The man said Helfert told him to keep their relationship between them quiet “because nobody else would understand.”

The witness said the sexual activities with Helfert began when he was 15 and continued for about six years. He estimated each activity took place between 10 and 40 times, putting the total count likely well into the hundreds.

In cross examination, defense attorney Trenton Stupak of Escanaba questioned the witness on what appears to be a selective memory. Stupak said what the witness told police officers in interviews differs from what he testified Friday, including the alleged number of sexual encounters between he and Helfert.

The alleged victim said he has a bi-polar condition which affects his memory.

Stupak asked the witness if he remembers having dinner with Helfert in September 2020, going for a walk with him and telling him he loves him? The witness said he could not recall any of those events.

Moments later, the witness said he does remember that he and his mom had dinner at Helfert’s house in September.

“You were just testifying about things that happened seven years ago like they happened yesterday and you have trouble remembering something from six months ago? Why is that?,” he asked.

“I don’t think the way most people do,” the man said. “I have a hard time trying to remember things.”

Stupak asked the witness if, after the age of 16, did Helfert ever force him to do anything, sexually, against his will.

“So after the age of 16, all of those things that you testified to that happened to you, was consensual?” Stupak said. “And that’s why you kept going over there—over and over. Hundreds of times.”

“I guess,” the witness said.

Stupak asked the man why he kept going to Helfert’s house despite everything bad that allegedly was happening.

“He (Helfert) would constantly guilt trip me into coming over to his house until I said yes,” he said. “I was very embarrassed, very disgusted with myself.”

Stupak asked the witness if Helfert ever pointed a gun at him or threatened him physical harm in any way. The man said he did not.

The man said he distanced himself, sexually, from Helfert after he turned 18.

The witness said the first person he told about the encounters with Helfert was his mom last fall. Then he told police officers on Oct. 5, 2020.

Stupak asked the man if the reason he went to police was because of a plea bargain Helfert received in a previous sexual assault case.

“No, I came forward to put a man behind bars that rapes children,” the witness said.

Stupak reminded the witness he said something different when being interviewed by detectives. The man told officers he came forward because of the plea bargain, Stupak said.

The alleged victim’s mother preceded him on the witness stand and she told the court how she met Helfert in April of 2013 and how he became a close family friend, even coming to her family’s home for holiday dinners and other occasions, such as birthday parties.

The woman testified she stood by Helfert, even as he was charged with sex crimes. That all changed in 2020, she said, when her son began telling her sordid details of his relationship with the deputy.

Rogg asked the woman why she was in court. “To help my son find justice,” she said.

Stupak asked the mother when she asked her son if there was anything improper with his relationship with Helfert.

“When he would come home from Brian’s house and go sit in the shower and lay on the shower floor and cry,” she said.

The woman said she continued to let her son visit Helfert after the first sexual assault allegations came out because she trusted him and didn’t believe what he was being accused of doing.

“I didn’t report anything until (her son) told me, what he told me,” the witness said, “then at that point we called Jeff (Rogg).” She said that was in October, 2020.

Judge will rule on Monday

Prior to closing arguments, Jamo told both attorneys he will make his ruling Monday at 8:30 a.m. He said the case is complex with many counts and he wants to give it ample time.

In his closing statement, Rogg said in light of the testimony, he believes even more charges could be brought against Helfert. Meanwhile, Stupak said arguments could be made to dismiss all 11 charges against the defendant.