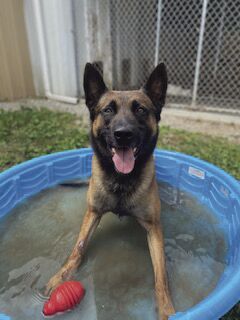 This photo shows Raven, of the Marinette Police Department's K-9 unit, sitting in a pool. 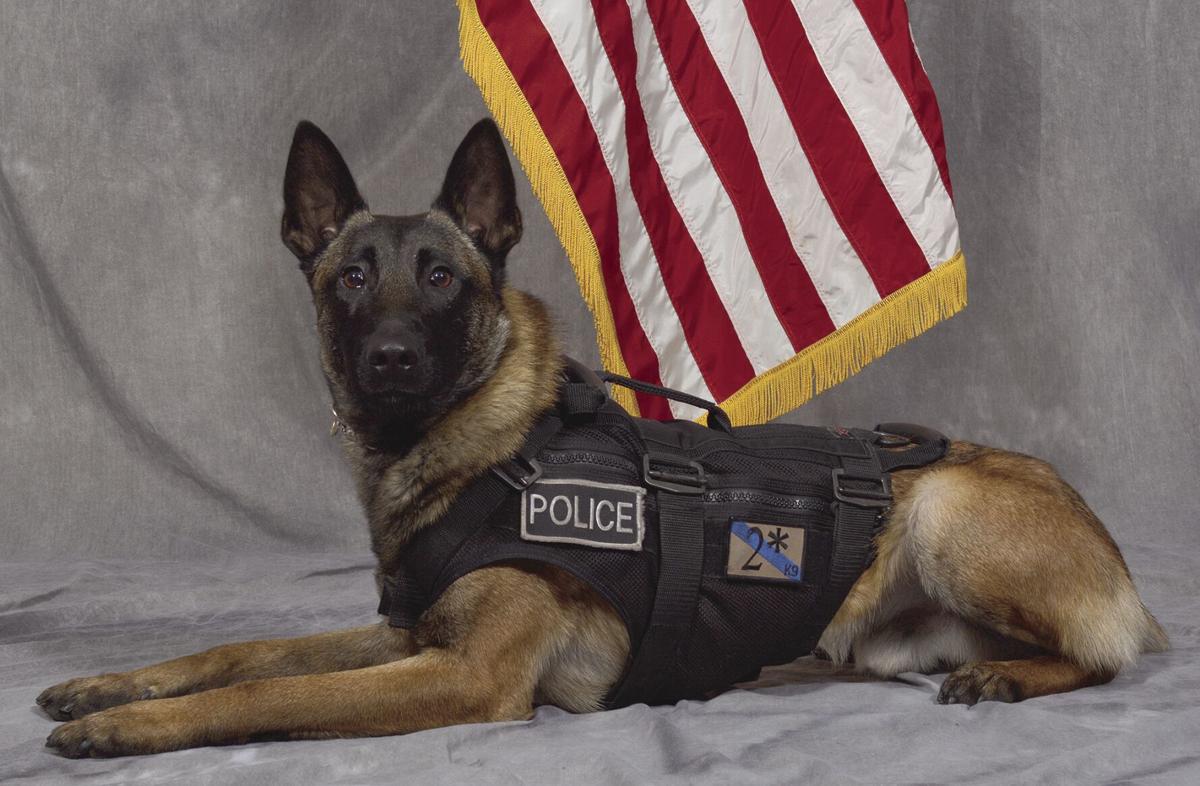 This photo shows Riggs, a member of the Marinette Police Department's K-9 unit, in full uniform.

This photo shows Raven, of the Marinette Police Department's K-9 unit, sitting in a pool.

This photo shows Riggs, a member of the Marinette Police Department's K-9 unit, in full uniform.

MARINETTE – The team of Riggs and Raven continues to capture both our hearts and the bad guys.

When Matt Borths learned of the department’s plan to incorporate dogs into police work, he jumped at the chance to become a canine handler. He’s a patrol sergeant who had already been immersed in the frustrating fight against drugs.

“I enjoy doing drug interdiction, and I knew dogs would make a difference. As it turns out, these dogs have become a critical part of the equation,” said Borths, who is teamed up with Riggs.

And they often lead to busts that go beyond drug dealing.

“The best is when we have seizures that include guns,” Borths said. “It’s great to know that something that could have gone much worse was prevented.”

A recent example of a multi-faceted scenario took place on Aug. 6, when the Menominee County Sheriff’s Office used a new dog named Dina for a bust at the Island Resort & Casino in Harris Township. It resulted in not only the seizure of methamphetamine but cash and a stolen car.

It started with the dog picking up a scent outside the car.

“The dog is an integral part of our tool bag and, in this case, it reinforced what we probably expected,” Menominee County Sheriff Kenny Marks said. “There are usually many contributing factors that lead us to probable cause (for a search), and a positive signal from a dog is one of them. It holds up in court.”

Dina even tracked down the suspects inside the casino, where they were lodging.

Marks’ office has four dogs, and Dina has not been trained to sniff-out marijuana because of its legalization in Michigan last year. Two of the dogs on the roster were trained for marijuana, creating a bit of a challenge for officers.

“It’s hard to reverse that. It’s not impossible, but it takes a long time,” Marks said. “We’ll probably retire them first.”

While most police dogs are trained for multiple duties, Marks went the non-traditional route by training a Labrador to work the county’s jail.

“All that dog does is sniff for drugs,” he said

However, German Shepherds and the Belgian Malinois are the most common police-dog breeds. Those earmarked for police work typically receive some training from the breeder, Borths said, and the average cost is about $13,000 – in fact, that’s the amount that the Oconto County-based Karl Zeitler Memorial organization, known for its annual hunt and law-dog challenge, donated to Marinette police for the purchase of Riggs.

As far as Riggs and Raven are concerned, they required an additional two months of training when they arrived at about 6 months and 1 year of age, respectively, a year apart.

The best method for that? The answer is simple.

“A ball,” Borths said. “Police dogs like to play, and work is play to them. We’ll place an article in a field, and when they find it they’re rewarded with their ball.”

The tracking of people and sniffing for drugs are the primary duties, and a simple command such as “track ‘em!” is often all that is needed.

“They are so instinctual that they’ll know their duty just by hooking a line up to a certain part of their vest. You don’t even need to tell them,” Borths said.

The ability to find drugs is the result of the dogs becoming familiar with an array of illegal substances the department keeps on hand.

“Narcotics eradication is what keeps them the busiest,” Borths said. “That’s what they know best.”

Also, surprisingly, they can serve as peacemakers during intense circumstances.

“A dog’s presence keeps a lot of situations safe when they otherwise would not be. When a barking dog comes out, people suddenly pay attention,” Borths said. “It’s more effective than a police officer yelling. Let’s face it, nobody wants to be bitten by a dog.”

Their intimidating presence notwithstanding, the dogs are a big attraction. Each summer, the city’s National Night Out police/community interaction event (canceled this year due to COVID-19) is a setting where the dogs’ skills shine.

“The bite suit is the favorite. That should be a teachable moment for anyone,” Mabry said with a chuckle of the demonstration where the dogs chase down and tackle a padded officer acting like a fleeing suspect.

The dogs are so popular, in fact, their program is self-supporting.

“One thing not everyone realizes is that the K-9 is totally donation-driven,” Mabry said. “When we first decided to have them, we predicted we’d need to raise about $25,000. Well, the community came through with more than $50,000 that first year.”

Proof of that came before they even arrived. In June of 2016 an annual run/walk event, first known as the Riggs Run before Raven came on board, was established and drew hundreds of participants — many of whom had their own dog in tow.

This, before a dog had even joined the force.

“People just loved the idea,” Mabry said, “Today, we get them (the dogs) out in the community as much as possible. They’re in demand.”

An annual golf outing held at Little River Country Club followed, but both events have been called off this year due to the pandemic, putting a dent in the program’s budget.

“We aren’t suffering, we’re still OK,” Mabry said. “But if we don’t get back to having these events, we’d run short over time.”

He reminds community members they don’t need to participate in a fundraiser in order to donate.

“Anything you can do for us any time of the year would be appreciated,” Mabry said.

The biggest current downside to a dip in the funds, he added, is a lessened ability to take advantage of the abundance of K-9-related training programs.

“It’s a very big deal and there are a lot of people who offer a lot of expertise,” Mabry said. “I discovered that when we first decided to do this – we had a panel of experienced K-9 handlers from other departments who volunteered to serve as a panel for our interviews, and some of them came from across the state. It’s taken very seriously.

“So, I just went with their recommendations on who scored the highest.”

That was Borths, tops among six applicants, and Mabry wasn’t surprised.

“He was driven and focused,” the chief said of Borths. “He was instrumental in this. He did all the research, the cost analysis.”

Officer Adam Waeghe, who was assigned to Raven a year later, would soon leave to join a different department, “but there was no way we were going to let him take the dog,” Mabry said.

So, another panel came in to conduct the same rigorous interviewing process, and Officer Derrik Maye was the replacement choice in January of 2019.

Considering the dogs actually live with their handlers, a transition for Raven was the next challenge.

“I had heard horror stories about trying to make a new home for a police dog, but I’d say it only took about two months for him to feel at home. We beat the odds,” Maye said.

Some of that is no doubt attributed to the fact that Maye knew a lot about the breed.

“I actually helped Matt train Riggs and I was so impressed with the Belgian Malinois that I got one of my own,” Maye said. “She’s not a police dog, but Raven had a friend the day he moved in. And she’s about the same age.

“Also, I live alone. That probably made it easier.”

Friends beyond the Police Department

Meanwhile, Mabry remains delighted with the program’s success on many levels.

“Back in the day, we knew the use of dogs was effective and we’d try to borrow one when there was one in the area, whether it be from the (Marinette County) sheriff or another department. We did have the occasional need, but it was hard to determine how often because we had to rely on someone else,” Mabry said. “Now that we have our own, let’s just say they have exceeded our expectations, both in terms of how often they are utilized and how successful they’ve been.

“As for the community support, that has far exceeded our expectations.”

The generosity of those at the Barking Spot on Old Peshtigo Road, home to dog grooming and dog sitting, is another example.

“When they were looking to buy Raven, the police asked us to put out a fundraising bucket, which we did,” Robin Thom, the facility’s manager, said. “Then I said, “I’ll tell you what, I’ll do you one better. Whenever you need to board the dogs, we’ll do it for free.’

“Well, you’d swear we’d given them a million dollars. That’s how much it means to them.”

Generosity aside, the service she offers has been a great source of pride for Thom.

“It makes us really happy to be trusted with them,” she said. “Let’s face it, the handlers just can’t call up a friend and drop them off. These are police dogs we’re talking about. They need structure.

“Derrik always tells us how much he appreciates this, but I tell him we in turn appreciate how the dogs help keep our community safe.”

Maye’s gratitude may also result in knowing that Raven has a blast at the Barking Spot.

“You’d never know he’s a police dog,” Thom said. “He’s so fun-loving and loves to romp around in our little doggie pool. He’d lick you to death before anything else.

“My 6-year-old son Charlie wants to be a police officer because of how Raven jumps up on him.”

“Riggs is a little more standoffish, but he’s coming around,” she said. “We love them both.”

“That dog is pretty territorial and stone-headed when it comes to the job, or when being in unfamiliar situations, but you can’t believe how he can flip a switch when it comes to his home life,” Maye said. “He obeys Matt’s three kids like he obeys Matt, and they are under 12 years old.