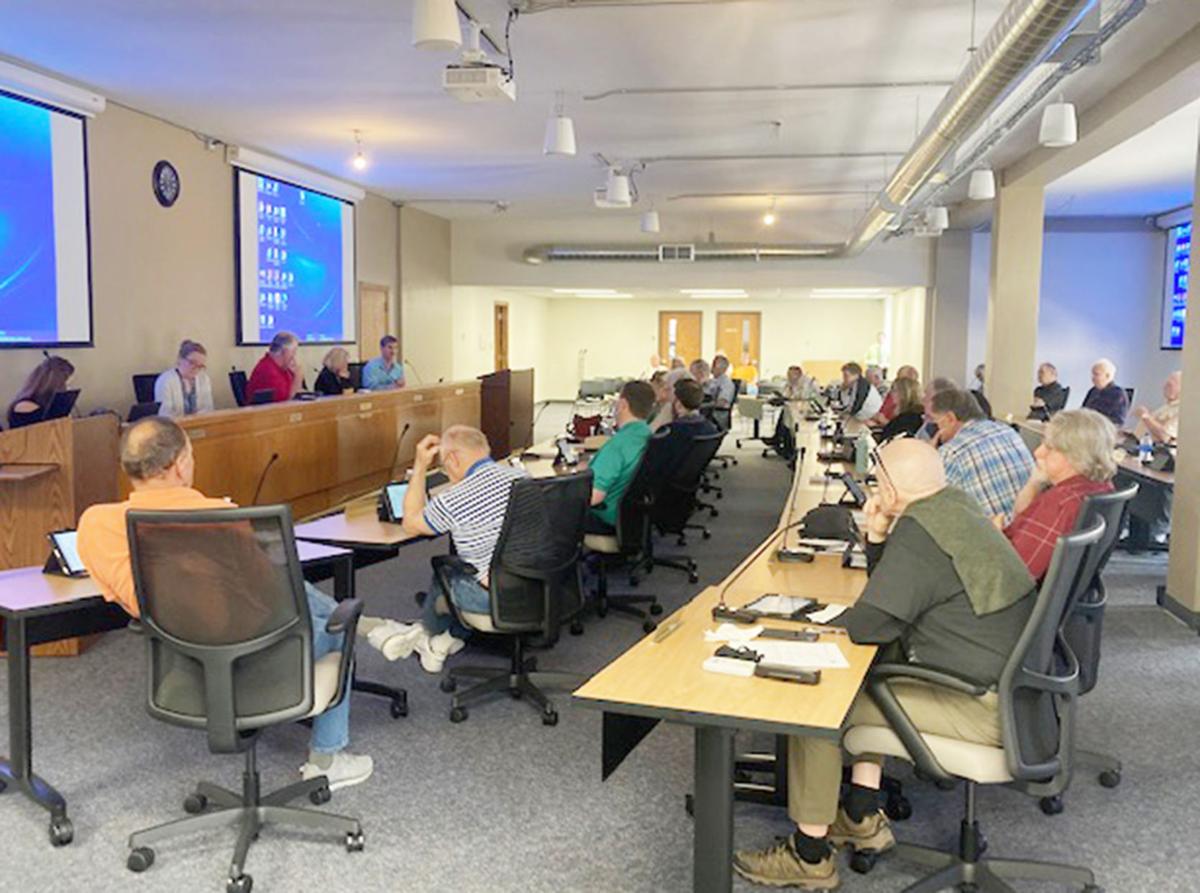 Marinette County Board supervisors met Tuesday for the first time in their new board room. It is located on the first floor of the courthouse. 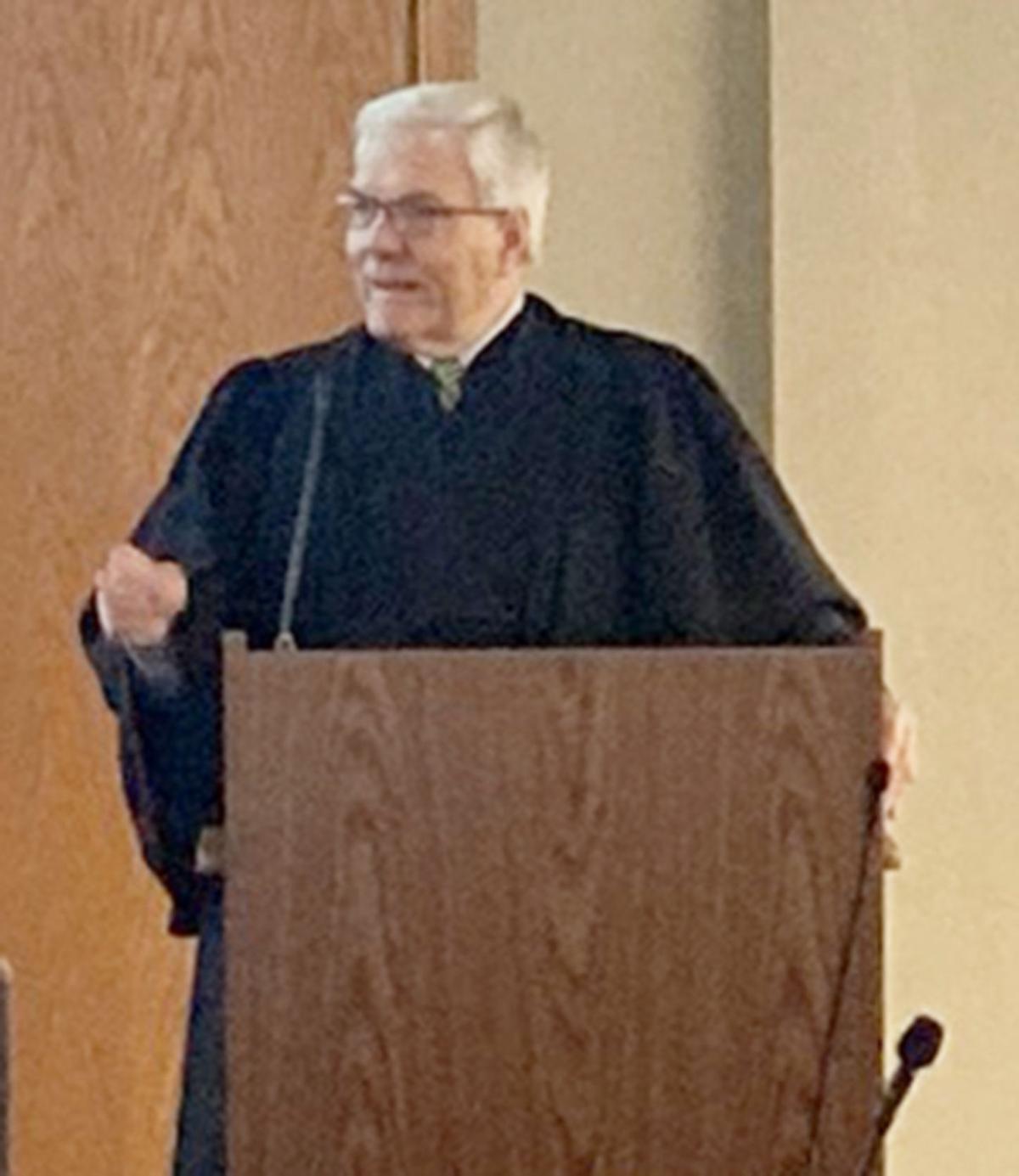 Marinette County Circuit Judge Jim Morrison Tuesday informed the full county board about some good news for the county’s Mental Health Court. It received a $7,500 grant from the M&M Community Foundation.

Marinette County Board supervisors met Tuesday for the first time in their new board room. It is located on the first floor of the courthouse.

Marinette County Circuit Judge Jim Morrison Tuesday informed the full county board about some good news for the county’s Mental Health Court. It received a $7,500 grant from the M&M Community Foundation.

MARINETTE—Nice acoustics, more elbow room and plenty of space for the public. The Marinette County Board conducted its first meeting Tuesday in its new board room on the first floor of the courthouse.

County Administrator John Lefebvre explained that the room is still a work in progress. He said new lighting just arrived, but it has not been installed yet.

For the past few months, because of COVID-19, the board has met at the Herbert L. Williams Theatre on the UW-Green Bay Marinette campus. That location offered more space and an opportunity to social distance as opposed to the old county board room on the third floor of the courthouse.

Lefebvre said committee meetings will also be conducted in the new venue. He said the rolling tables can be moved and configured to meet any size of committee.

“I think it’s a little bit larger,” he said of the location. “If we need to, we can provide microphones at any given time during the meetings.”

Lefebvre said the Health and Human Services Board can still meet at the HHSD building if it desires, or it can meet in the new board room.

The county also is looking to move the Clerk of Courts office from the second floor of the courthouse to the first floor of the annex. Lefebvre said work will begin next month.

“The goal, as I’ve indicated before, is to turn the annex into a judicial center,” he said, adding that the judicial center will be secure with every person who enters being screened.

Lefebvre said the target is to have the judicial center completed in six months. He said the county is working closely with Circuit Judge Jim Morrison to make the courthouse as secure as possible.

In another matter involving Morrison, the county’s Mental Health Court received a $7,500 grant from the M&M Community Foundation. The judge, along with other members of the Mental Health Court committee, was presented with an oversized ceremonial check from foundation Director Paula Gruszynski.

Morrison said getting the grant is a big deal. “But what’s a bigger deal, I think, is that this county stepped up to the plate to provide all of the support and all of the funding for this mental health court when we started,” he said.

The judge gave credit for obtaining the grant to Lt. Joe Nault of the Marinette Police Department, a committee member, along with the rest of the board.

Grusynski said the foundation’s committee, when determining where grant money is distributed, looks at how many people may be affected.

“This mental health court changes lives from here to Goodman and our (committee) recognized that immediately,” she said.

Morrison said four members of the mental health court were in the courthouse Tuesday morning and “each one of them is better off today than they were a year ago.”

He said the court is hopeful it may receive another grant from the Aurora Medical Center Bay Area foundation.

Æ Lefebvre said the county will no longer allow supervisors or other committee/board members to attend meetings virtually.

Æ The administrator pointed out that there has been a spike in the amount of inmates at the jail and some have been transferred to Florence and Oconto counties in order to keep jail numbers at a reasonable level.

“That stimulus money is working very well—it’s stimulating a lot of drug deals throughout our community,” Lefebvre quipped.

Æ Lefebvre informed the board that the county on May 19 received $3,918,757 from the American Rescue Plan. That’s the first half of the funding, with the second half slated to be received in May of 2022.

“All funds must be extended by Dec. 31, 2024,” Lefebvre said. He added that more information is available online, including how the funds can be used.

“However, before considering the distribution of any of these funds to other entities, such as small businesses, nonprofits, I want to make sure that all eligible county needs are considered first,” Lefebvre said.

He said the county is not on a fast track to distribute the funds, so he wants to make sure it is done in a deliberate manner.