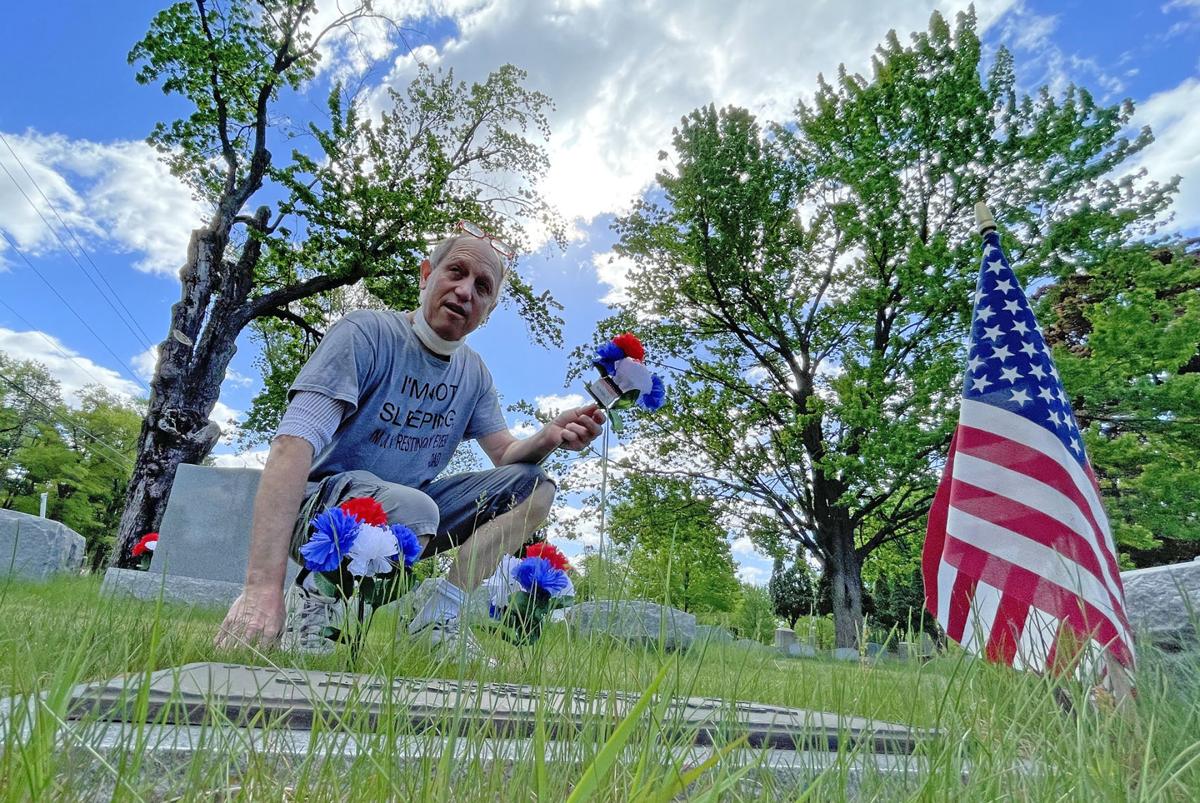 Marinette-area resident Tony Linczeski places carnations Wednesday morning at the Forest Home Cemetery headstone of World War II veteran Robert Diamond, who received a Purple Heart for wounds sustained in combat during the invasion of Normandy. Diamond is the father of Linczeski’s wife. 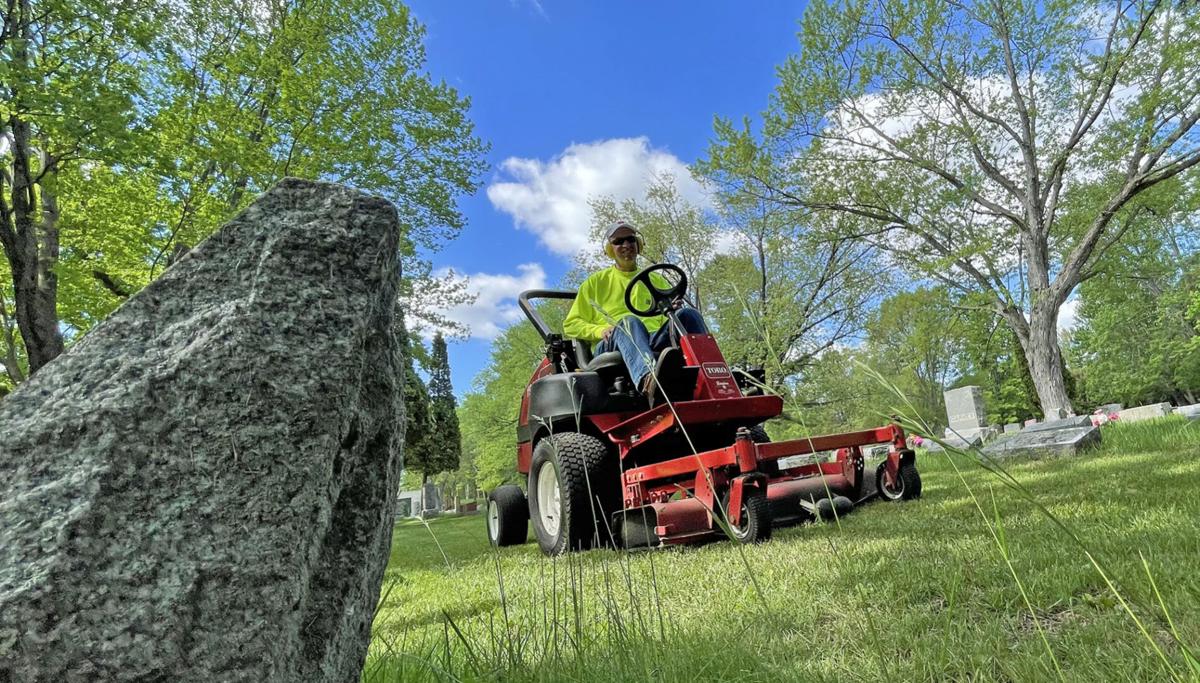 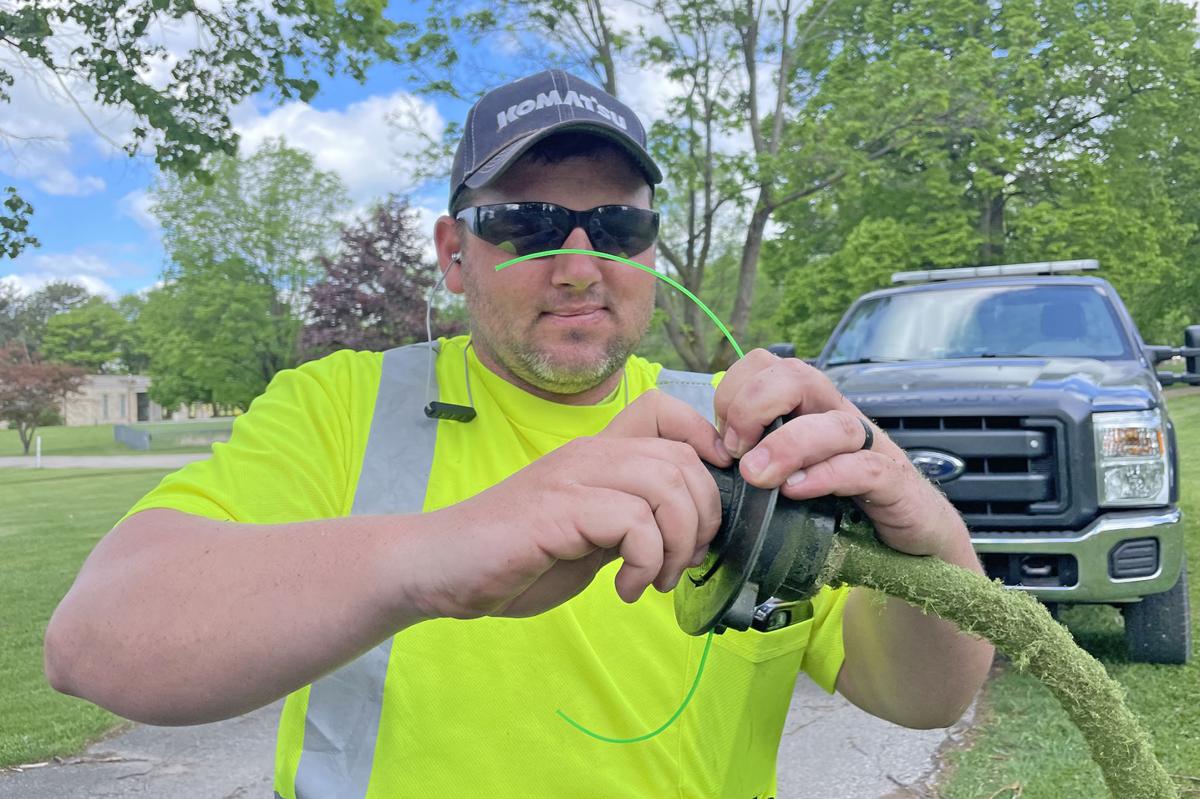 During a long week of trimming corners and whipper stripping weeds throughout the 70 acres of Marinette cemeteries, Public Works employee Jed Buechler, changes out some worn string trimmers.

Marinette-area resident Tony Linczeski places carnations Wednesday morning at the Forest Home Cemetery headstone of World War II veteran Robert Diamond, who received a Purple Heart for wounds sustained in combat during the invasion of Normandy. Diamond is the father of Linczeski’s wife.

During a long week of trimming corners and whipper stripping weeds throughout the 70 acres of Marinette cemeteries, Public Works employee Jed Buechler, changes out some worn string trimmers.

MARINETTE—An even cut, sharp around the corners and whack away the tatty growth. As good clean cuts go in the City of Marinette, this one spans at least 70 acres and digs deep at the roots of sacrifice that support the freedoms, founding principles and people of this nation.

And each year, a cadre of Marinette city employees make it happen, to help remember the United States Armed Forces men and women who served and sacrificed to maintain those freedoms. Such memorial entails attention to detail that constitutes a deep reverence and a solemn beauty imparted to the grounds of those soldiers’ final resting places.

In General Order No. 11, titled titled “Memorial Day Order,” issued May 5, 1868, and archived at the National Cemetery Administration of the U.S. Department of Veterans Affairs, Gen John Logan, a Civil War Union Army general and later a U.S. Senator, stated:

“We should guard their graves with sacred vigilance... {span}Let pleasant paths invite the coming and going of reverent visitors and fond mourners. Let no vandalism of avarice or neglect, no ravages of time, testify to the present or to the coming generations that we have forgotten, as a people, the cost of a free and undivided republic{/span}.”

Falling in line with those words, “neglect” does not apply when it comes to the approximate 70 acres of Marinette’s three cemeteries, especially this time of year.

ALL HANDS ON DECK

For about the last week, the cemeteries have been abuzz—often literally—as employees from the city’s cemetery crews, public works department and even a couple borrowed staff members from the water utility department drove a heavy workload for the upcoming Memorial Day weekend.

“They have been coming in early and staying late,” said City Clerk Lano Bero. “Memorial Day is a day to express our gratitude towards the people who have served our country and to our loved ones who are buried there. So we really want to make sure, especially for Memorial Day, that everything is done as best as we possibly can have it done.”

Bero also serves as the administrator for Marinette’s small cadre of employees who tend the cemeteries year-round. And, currently, with only three permanent cemetery crewmembers this time of year, she emphasized her gratitude for the additional support from the public works and water utility departments in efforts to spruce up and beautify the lawns, headstones, mausoleums and other areas for the upcoming weekend and Memorial Day ceremonies.

“This week it was all call, to get anybody in there to help get the cemeteries ready,” Bero said. “We try to keep it looking nice and we try to have everything ready for Memorial Day … and maintaining the grass is constant. They get done on one end and they have to start right back up.”

As the past several days revealed, tending the cemeteries throughout the year often comes down to keeping up with the weather, a point addressed by Public Works Superintendent Patrick Carlson following the work crew’s early morning muster Wednesday morning, just before workers converged on Forest Home Cemetery for a long day on the mowers or toting a weed whacker.

“We have to trim every headstone and cut the grass,” Carlson said. “And it’s been raining on and off. When we get this kind of hot, humid weather the grass (growth) explodes”

Moreover, throughout the spring and summer, according to Scott Walters, a lead groundskeeper for the city’s cemeteries, with six workers and three lawnmowers, it takes four to five days to weed eat all three cemeteries and about three to four days to cut grass.

However, all that works turns back to the origins and purpose behind Memorial Day, which in many ways, derives its origin from the Nation’s cemeteries.

When it comes to the number of lives lost, of all U.S. military conflicts, the Civil War tore through American families worse than any other, claiming over 600,000 men and women from both sides. According to History.com, that considerable burden required the country to establish the first national cemeteries. The war ended in the spring of 1865 and by the close of that decade, Americans throughout the land had begun to congregate in cemeteries each spring, bearing flowers and prayers for loved ones’ graves to remember and honor the sacrifice.

Initially known as Decoration Day after Gen. Logan called for a national day of remembrance in his “Memorial Day Order.” He bequeathed that day as he put it, “for the purpose strewing with flowers, or otherwise decorating the graves of comrades who died in defense of their country during the late rebellion (Civil War), and whose bodies now lie in almost every city, village and hamlet churchyard in the land.”

Not until about 100 years later did the federal government finally designate Memorial Day an official holiday in 1971. And today, cemeteries across the country continue to serve as the gathering places for those commemorative ceremonies.

And thus, its history lends a weight of respect for those who work to ensure that, on the last Monday of May each year, Americans can offer reverence for the sacrifices made by military service members and the Nation can continue to honor the legacy of that sacrifice.

Wednesday morning, under lofty clouds broken by radiating warmth and blue sky, amidst the soft din of birdsong and a light breeze, Marinette area resident Tony Linczeski ventured to Forest Home Cemetery with his sister and brother-in-law. He carried red, white and blue carnation décor, which he placed at the headstone of his wife’s father, Robert Diamond. Diamond, a U.S. Army service member who fought during the invasion of Normandy in France earned a Purple Heart for wounds he sustained during combat. The invasion began on D-Day, June 6, 1944, and marked the beginning of the Allied advance into Western Europe during World War II.

Linczeski understands the importance that families place on the upkeep of their loved ones’ resting places. Prior to laying carnations, he and his sister and brother-in-law walked a one-mile loop through Forest Home.

“And as we were going around I said to them, ‘boy does it look nice here’ because the flowers are starting to show up and it is really just coming to life,” Linczeski said. “It is nice to see it, and it is a respect thing. My parents are on the other side of the cemetery and (my father) is a veteran too … and it is about our soldiers … we wouldn’t be living in today’s society without them: the Greatest Generation ever.”

That same morning, across the way in Forest Home, Public Works and cemetery crews continued their busy day.

From his perch upon a mower, Walters echoed Linczeski’s thoughts as he spent the morning trimming down the southwestern region of the cemetery. Both of Walters’ grandfathers saw action in the Army, one during World War I and the other in World War II.

“It is pretty important work,” Walter’s said, referring to the maintenance of the cities cemetery grounds and acknowledging his fellow employees. “(Our Nation’s) service members (sacrificed) for their country … and we owe it to them to keep up the cemetery.”

Marinette Mayor Steve Genisot, scheduled to speak at Monday’s 10:45 memorial ceremony at Forest Home, also recognized the significance of bestowing a level of respect to such hallowed places, as well as respect for those behind work.

“It’s all hands on deck every year around Memorial Day to ensure the cemeteries look really good,” Genisot said.