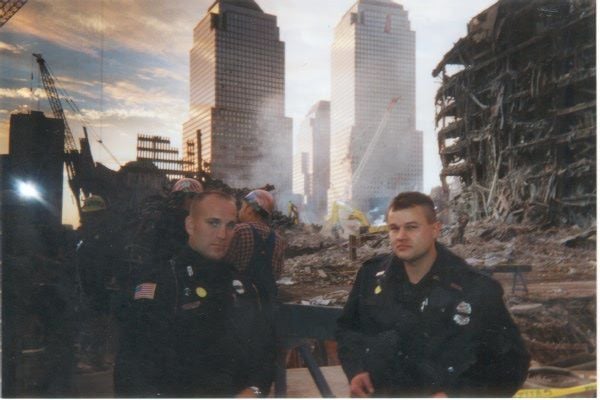 Fred Popp (left) and Randy Miller (right) at Ground Zero. Popp and Miller were both officers with the Marinette Police Department at the time of the 9/11 terrorist attacks. 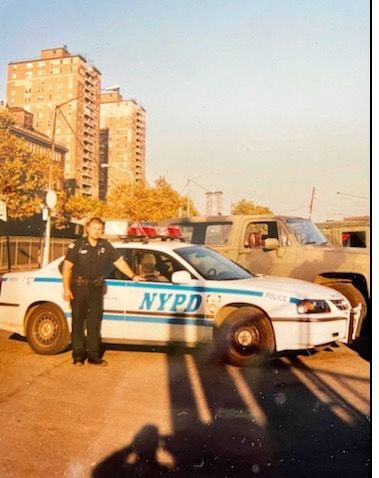 Miller standing in front of an NYPD squad car at his Pier 36 security detail. Miller said he and Popp mostly did foot patrol with the NYPD but sometimes used squad cars as well.

Fred Popp (left) and Randy Miller (right) at Ground Zero. Popp and Miller were both officers with the Marinette Police Department at the time of the 9/11 terrorist attacks.

Miller standing in front of an NYPD squad car at his Pier 36 security detail. Miller said he and Popp mostly did foot patrol with the NYPD but sometimes used squad cars as well.

“The first one caught us off guard,” said Miller, who was a police officer with the City of Marinette Police Department at the time. “And then, as we were watching the coverage, you could see the second one wrap around and come in. Everybody was watching the TVs at that point.”

“I don’t know if we went there to get something to eat or for what, we just stopped there and everybody was just kind of standing and watching the TVs in different areas, they were glued to whatever media was coming out,” he said. “It didn’t appear that anybody was shopping.”

After the attacks, Miller said he started talking with Marinette County Deputy Sheriff Fred Popp—then a police officer for the City of Marinette Police Department—about volunteering their help in New York City. They were able to connect with representatives of the New York Police Department (NYPD) and arranged to travel to New York City for a week. Locals donated supplies and air miles to fund their travel expenses.

“The community really rallied to get us out there, and we kind of went out as an extension of our community and on behalf of our area,” Miller said.

Miller and Popp boarded a plane in Green Bay and headed for New York City about two weeks after the attacks. The plane was nearly empty. Miller said the flight attendants were glad to have police officers on board.

“The flight attendants were talking to us, and they were worried because they fly obviously every day,” he said. “They offered to upgrade us to first class, but we said we wanted to sit in the back so we could see everything that was going on. That’s just kind of a natural police instinct, we wanted to see so we could react if anything happened.”

All the passengers looked out their windows as they started coming into New York, Miller said. “You could see the damage, it looked like a warzone.”

They stayed at Novotel on 52nd Street in Times Square, about four and a half miles north of Ground Zero, and checked in at the Jacob Javits Convention Center on 11th Avenue every morning.

Sometimes Miller and Popp took a taxi from their hotel to the convention center.

“The taxi drivers would say, ‘I’m giving you a ride, we need to get you to where you need to go,’ and they would just drive us for free,” Miller said.

Miller said people donated pizza and pasta, energy bars, energy drinks, sodas and other food to the convention center. They usually ate their meals there or at other facilities set up for volunteers, and local businesses would often bring food out to them as they were working.

“Everybody was just so thankful to first responders,” Miller said. “It was really a time where everybody came together. There was just so much unity and an overwhelming amount of support.”

“He took us in right away,” Miller said. “He really made us feel at home. He told everybody who we were, and we were accepted really quickly. Without that, we would have been outsiders.”

Miller said the amount of destruction at Ground Zero was shocking; the smell of burnt vehicles and rubber and buildings, the amount of dust and debris and dirt, the persistent drift of ash falling on their jackets and their food, driving them to take shelter, flyers printed with the faces of missing persons, plastered on fences, posts, windows, anywhere and everywhere.

“It was like walking in a twilight zone,” Miller said.

Miller and Popp worked security details at Ground Zero, Times Square, the United Nations Secretariat Building, New York City Hall, the Jacob Javits Convention Center, Saint Patrick’s Cathedral, Pier 36 and the makeshift mortuary on the East 30th Street side of the medical examiner’s building on First Avenue. There was the possibility of another attack. Miller and Popp were part of the effort to prevent one; they worked with bomb detection officers and explosive detection canines, supplementing NYPD officers on their shifts.

“It’s similar to what happened at the airport in Kabul,” Miller said, referring to the Aug. 26 Islamic State terrorist attacks at the Hamid Karzai International Airport in Kabul, Afghanistan. “People were worried about getting attacked when they were vulnerable.”

Miller said the makeshift mortuary was an outdoor operation, an entire city block of tents where medical examiners processed thousands of wedding rings, toothbrushes, teeth and other remains to help identify missing persons and bring closure to families.

“There were some people that told us stories of losing loved ones,” Miller said. “They were supposed to be going to work and ended up being late. The only reason they were still alive was because of that.”

“As it gets closer to the 20th anniversary, you really sit back and reflect on what exactly happened there,” he said. “It’s never gonna leave my mind, what happened there and how many people were lost. Even though it’s been 20 years, it seems like it was just yesterday.”