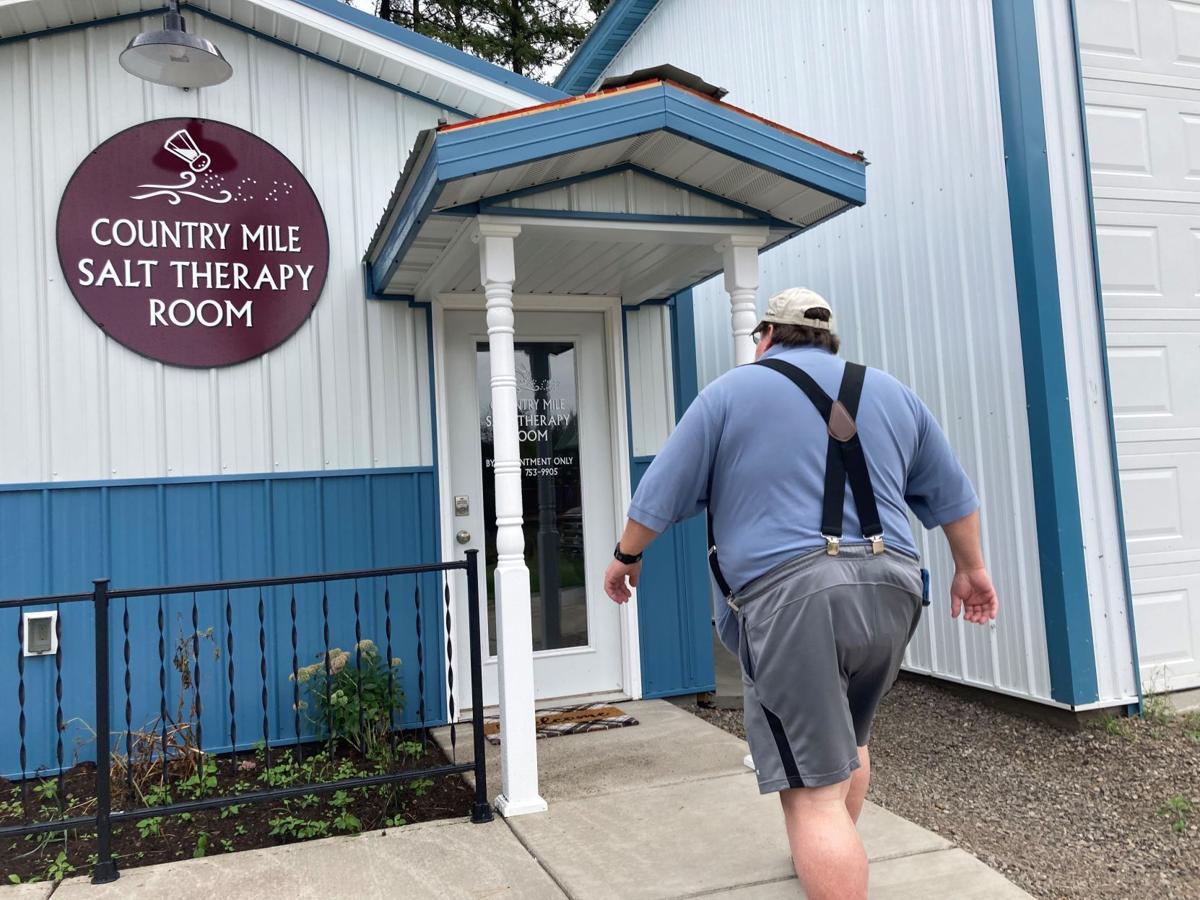 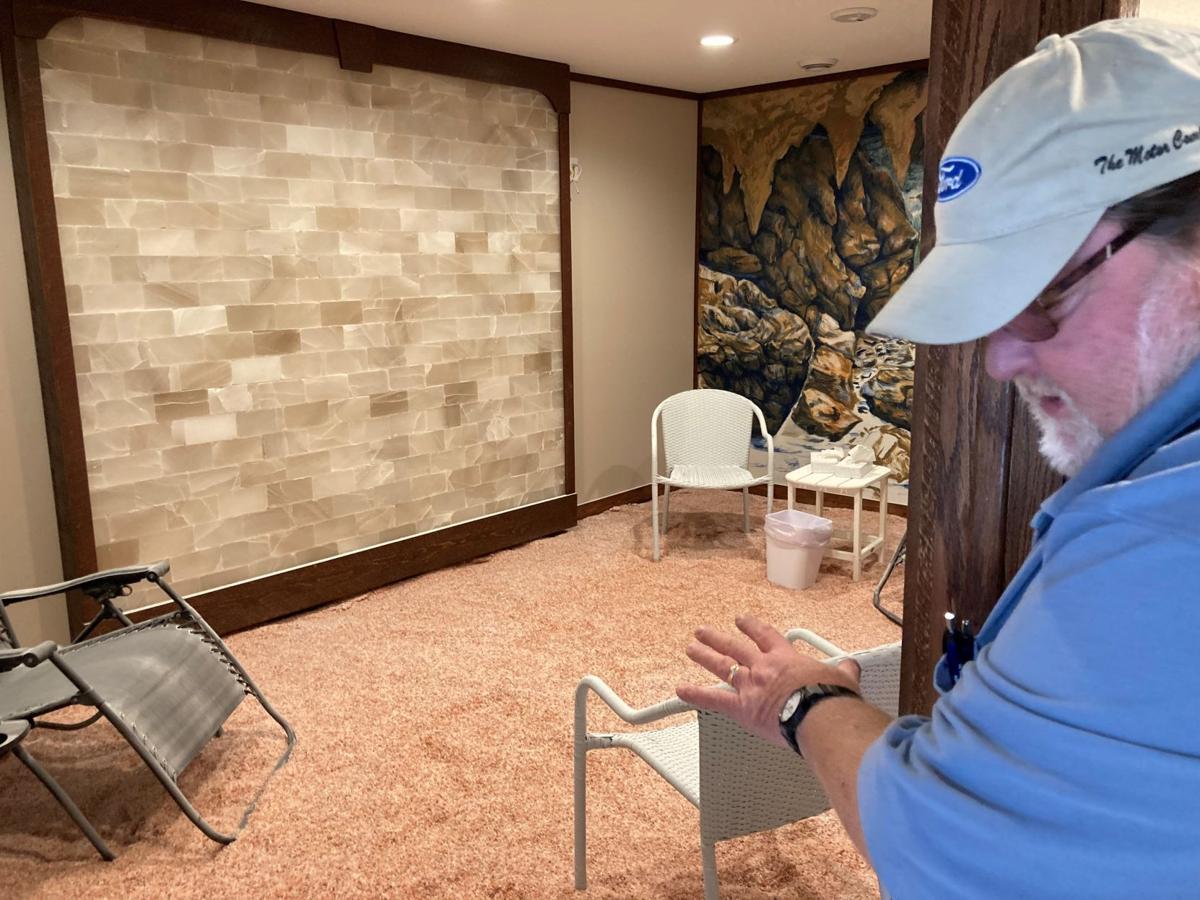 Roger Younk of Stephenson points out the cave murals, Himalayan brick wall and salt pebbles in the new salt therapy room he opened in August. 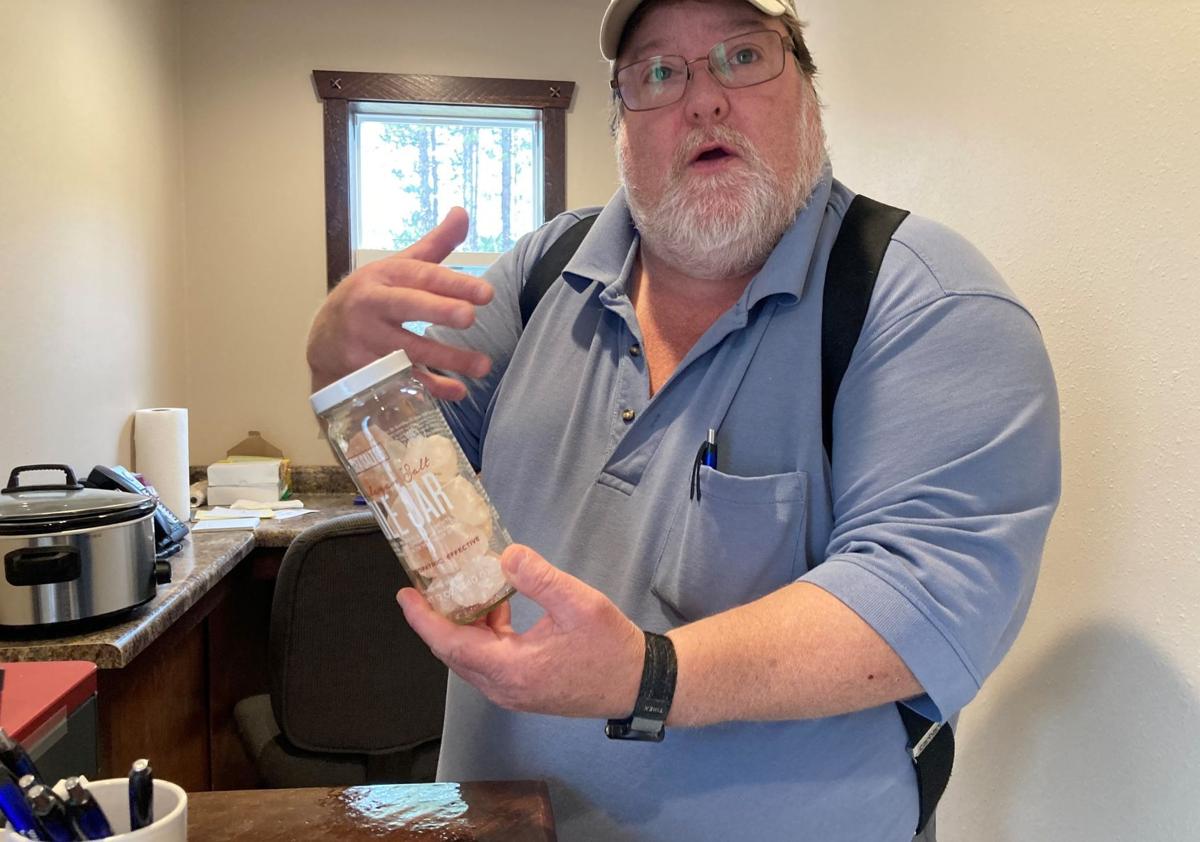 Roger Younk hopes to recoup his $50,000 to $60,000 through new revenue from salt therapy sessions and related products.

Roger Younk of Stephenson points out the cave murals, Himalayan brick wall and salt pebbles in the new salt therapy room he opened in August.

Roger Younk hopes to recoup his $50,000 to $60,000 through new revenue from salt therapy sessions and related products.

STEPHENSON—For his latest business endeavor, Roger Younk of Stephenson, listened to his body.

What’s good for him, he decided, must be good for other people.

After a session at a salt therapy room in southern Wisconsin, Younk said his asthma and cough cleared up considerably. He regained a feeling of energy and could belt out a Randy Travis song.

It was enough to persuade Ann, his wife and co-owner of the business, that opening a salt room on their property had potential.

The Country Mile Salt Therapy Room, which opened in August by appointment, recreates the feel of an ancient salt room. The concept of using salt for medicinal purposes dates back to the 1800s in Russia and Europe, Younk said, where people relied on salt to cure a range of illnesses, from asthma, emphysema and bronchitis to sinusitis and sleeping issues.

“We’re not a doctor. We’re not a clinic. We’re just here trying to help some people,” Younk said.

The room uses no drugs, just sodium chloride, a natural antibacterial and anti-inflammatory agent. “It’s natural stuff,” he said. “People sign a consent form when they come in. They come on their own volition and reap the benefits.”

The Salt Therapy Association provides information and access to research papers describing its benefits. Breathing in dried salt in microscopic form can absorb allergens in the respiratory tract, reduce inflammation and open the airways, the association said. “It gets the moisture out of the lungs,” Younk said.

The Country Mile Salt Therapy Room was carefully designed to look like a salt cave with one mural depicting the sun shining at a cave entrance on one wall and another creating a waterfall flowing through rocks. Younk wanted a tranquil look, and Jim Finlan of Escanaba did the painting by hand, he said.

While the murals create the feeling of a natural environment, a wall of pink salt brinks is illuminated and turns a cool blue, and the gravel floor is made of colorful granulated Himalayan salt rocks.

“When we come in here, we lower the lights down dim. We throw on relaxing music in the background and you sit in this room, and relax and breathe,” Younk said.

An automatic salt grinder set in the wall blows microscopic salt into the room. “This is all done in medical grade steel,” Younk said. If you took an aerosol can and shot it into the sun so you could see the particles in the mist, that’s how finely ground the salt is, Younk said.

A 45-minute session costs about $35. “It’s as you need it. It’s not going to doctors and saying I’ll see you in three months for a follow up. If you feel good, you don’t have to come back,” he said.

The salt room sits near to Younk’s shredding business, Country Mile Document Destruction, which is going strong, he said. He also raises cattle and owns the Ice Cream Palace next to the theater, which is open and doing well, he said.

With his Tivoli Theater in Stephenson closed due to COVID-19, Younk had the time to remodel a woodshed on his property and turn it into the salt room with a separate waiting room. It took about five months and $50,000 to $60,000 to turn the shed into a handicapped-accessible building. In the front, Younk sells bath salts, balms and other salt products customers can take home.

The biggest challenge to the salt room, Younk said, is getting exposure. He turned to digital marketer Michael Rock, owner of Internet Presence LLC in Spalding, Mich., for help.

Rock, who created the website for Country Mile Salt Therapy Room, said he wasn’t aware of salt therapy until he started to research it for the site to educate people about it. In the Upper Peninsula, only two salt rooms exist, he said. Now he hopes to try the salt therapy himself.

With little competition to worry about, Rock said, Younk might be ahead of the curve. “Upper Michigan only has two to date,” Rock said. “People drive hundreds of miles to go to the salt room in Wisconsin. It’s a nice untapped market up here.”

While the Younks hope to realize a gain from their investment, it isn’t their only motivation. Ann Younk encouraged Roger to build the salt room so others could benefit. “I like that it helps Roger. He used to cough and cough and cough. I’m really glad he’s getting relief from it,” she said. “It’s better than going to the emergency room.”

Younk said he didn’t do a lot of market research ahead of time because he understood the salt room’s importance to him personally. “If you had a hard time breathing and you found something that will help you breathe, how do you put a price tag on it?” he asked. “I’ve seen the value. If nobody comes, I still have the room there for myself.”