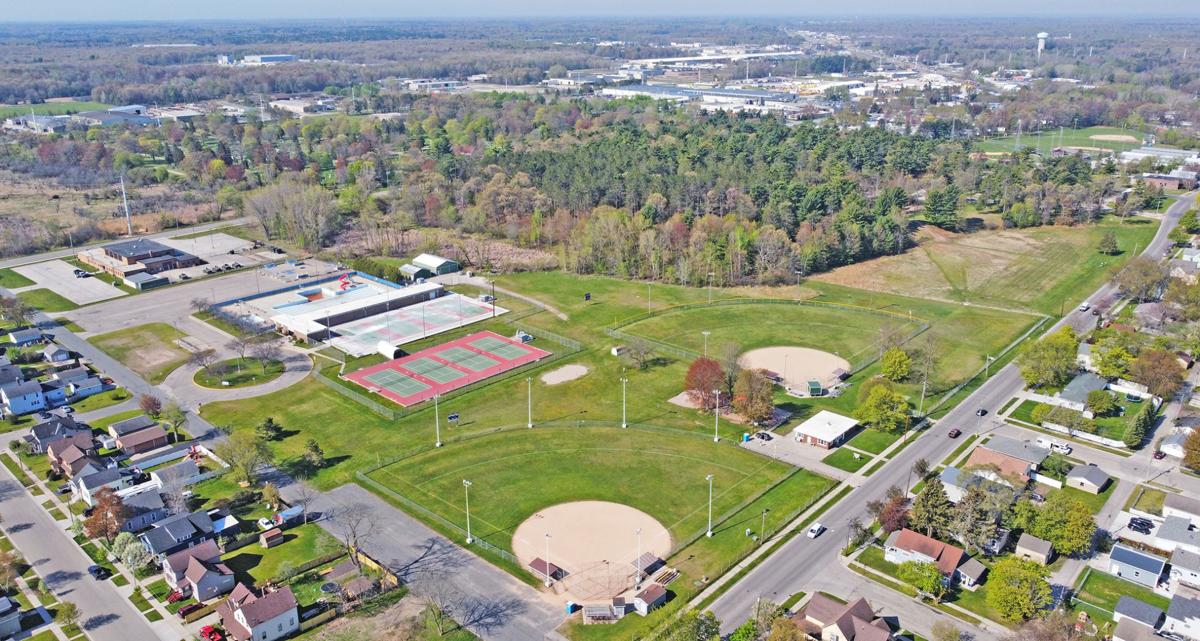 The Marinette Parks and Recreation Committee aims to establish a long-term comprehensive plan that enhances 8.7 acres of recreational amenities in Higley Park (bottom half of photo) while also creating better connectivity to the additional 40 acres of City Park (top half) just next door. 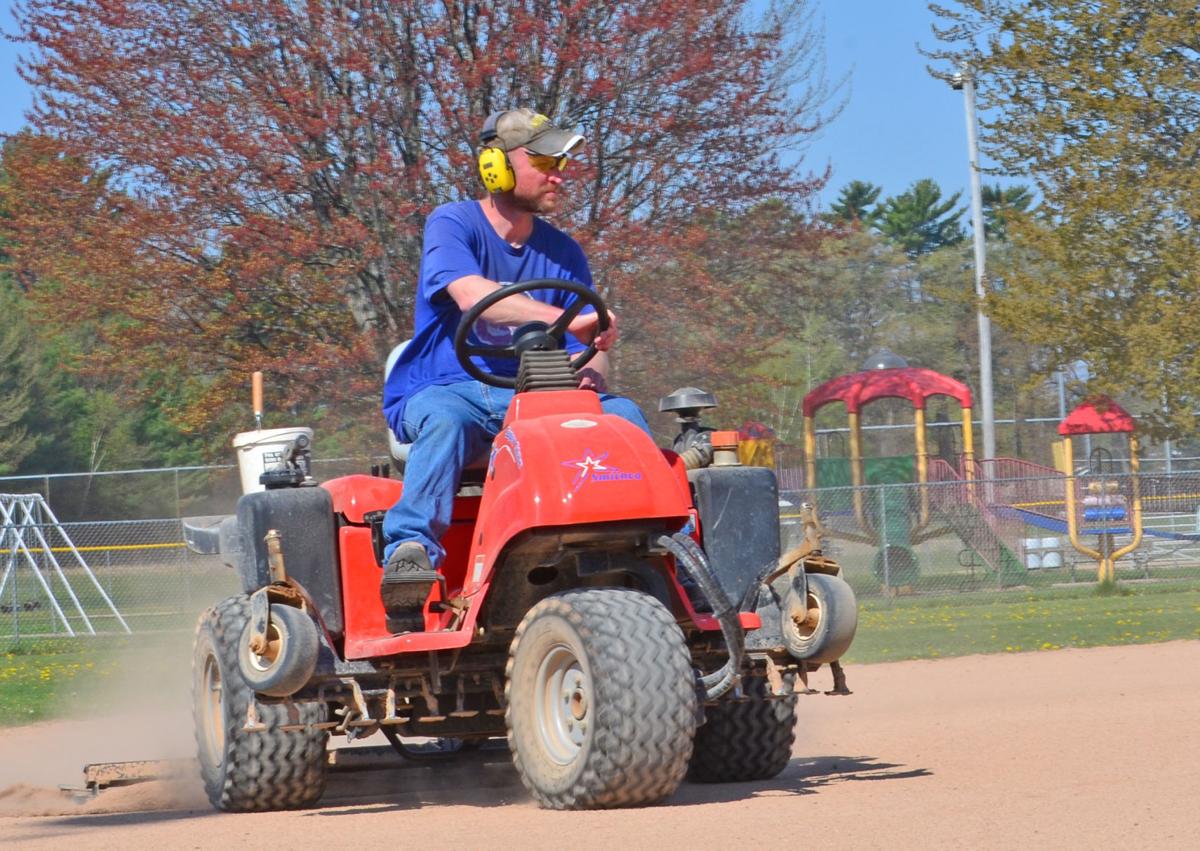 While city officials commit to ongoing discussions regarding the development of a roadmap for Higley Park’s future development, Parks and Rec employee Erick Neubert focuses on the more immediate future of the park Monday, as he grooms the east ballfield in preparation for the St. Thomas Aquinas Academy softball against Coleman High School later that evening.

The Marinette Parks and Recreation Committee aims to establish a long-term comprehensive plan that enhances 8.7 acres of recreational amenities in Higley Park (bottom half of photo) while also creating better connectivity to the additional 40 acres of City Park (top half) just next door.

While city officials commit to ongoing discussions regarding the development of a roadmap for Higley Park’s future development, Parks and Rec employee Erick Neubert focuses on the more immediate future of the park Monday, as he grooms the east ballfield in preparation for the St. Thomas Aquinas Academy softball against Coleman High School later that evening.

MARINETTE—A centrally located realm, on a patch of land that spans approximately 8.7 acres in the City of Marinette, offers area residents just about everything required to fill a day with abundant recreational pursuits and fun.

They call it Higley Park, and efforts to develop a long-term plan to maintain, upgrade and modernize the park are underway among officials with the city’s Parks and Recreation Department Committee.

Since February, Executive Director for the Park and Recreation Department Gavin Scray and Recreation Superintendent Adrienne Lacy have continued discussions with the landscape design and architecture firm Rettler Corp., Stevens Point, Wisconsin. Those discussions focused on hammering out various concept designs that they hope will serve as a comprehensive plan, drawing out a roadmap for the future of Higley Park.

“We haven’t secured any funding to make the improvements happen,” Scray said. “And there is no concrete plan. This is all, more or less, a master plan to say: this is where we want to get and this is what is it going to take to get there … so, in the future, if we do come up with the funding to make improvements for that park, (the plan) will pretty much be laid out.”

He emphasized that such a roadmap allows the committee to address Higley’s future as finances and annual budgets permit.

The city retained Rettler as a consultant to help it take a fresh look at the options for Higley Park’s future development. Those options included improved parking, modernized playground, addressing aging park structures and other ideas based on current trends in parks and recreation.

During the initial and subsequent meetings between Scray and Rettler, a list of high-level needs for the park materialized. A primary concern on that list involves the structure that sits next to the playground equipment at the north end of Higley Park.

Known as the Tot Lot building, the department abandoned its primary use long ago. Presently, the building continues to deteriorate. It has also become a more frequent target for nefarious-minded miscreants, thus creating a nuisance and safety issue for the city. Prior to 2009, the structure housed the Tot Lot program, which offered pre-school programming.

“We are kind of in a scenario where we need to address (the building), whether that means tearing it down, boarding it up, or doing something else with it,” Scray said. “Because, not only is it an eyesore, but it is consistently being vandalized.”

After performing an analysis of the building, the Rettler Corp. designs suggested removing the structure and replacing it with parking or new facilities such as concessions or restrooms.

“The best thing (for that building), in our recommendation, would be to start anew, with new facilities,” Kneer said Monday. “Opening up that part of the site gives us an opportunity to include additional parking.”

Beyond the Tot Lot revisions, the concept plans offer several other tantalizing visions of park possibilities. Similar in scope and amenities, each design revealed potential additions and improvements for the playground, parking, ball diamonds, pavilion, concessions, the skateboard park. Those items and other broad-scale applications, if they reach fruition, will essentially give the aging park a facelift. One design also included a 2,700 sq. ft. plaza structure centered between reconfigured ball diamonds. The plaza would house concessions and restrooms.

“There are a lot of opportunities,” Kneer stated, during the April Parks & Rec Committee meeting. “I think there is a tremendous opportunity to open up the park—to remove some fencing and have greater connectivity to better implement access to the park from cars and pedestrians … We had a lot of great ideas that spurred conceptual developments.”

Kneer delved further into the need for a better distribution of parking to facilitate improved pedestrian safety and more streamlined access and convenience for parkgoers. He also discussed improvements to the tennis courts and softball fields and addressed upgrades to the park’s heavily used play spaces. Finally, he addressed the feasibility and for a long-lingering item on the Marinette communities wish list, a splash pad.

“A splash pad is something the community has been asking for forever,” said Committee Chairperson Dorothy Kowalski. “I think (the) splash pad, if we can do it, is important to the community.”

The Higley Park Comprehensive Plan serves primarily as a playbook of possibilities. Thus, when it comes to the financial component, Scray described any potential and far-reaching changes to the park would likely follow a phased process and not occur all at once. Instead, Rettler and the Parks and Recreation Committee would address various improvements to the park in a step-wise process, treating each improvement or upgrade as a separate project as money became available.

“Basically, (we would) put a dollar amount on each one of the separate components of the (Comprehensive Plan),” Scray said.

Kneer added that presenting two concept design ideas to the committee serves as a way to stimulate ideas, feedback and other input from committee members. That feedback will provide further direction towards a preferred concept design, which would include cost estimates of each component. Eventually, those concepts would be refined into the master plan.

Kneer echoed Scray’s emphasis that the Comprehensive Plan would possess a high “phase-ability,” allowing the city to address each component or project of the overall plan one at a time, effectively distributing cost.

“There is no one domino that going to knock them all down,” Kneer said regarding potential development options. “They are very ‘phase-able’ in bites, we can prioritize ... we can look at each segment (of the Comprehensive Plan) and tackle it one ballfield at a time (or) a building and a plaza at a time.”

While the development of a Higley Park Comprehensive Plan focuses primarily on Higley, both Scray and Kneer also identified the potential of developing a better transition area between Higley and the 40 acres of forest immediately to the west that comprises City Park. Kneer explained in addressing possible advancements to Higley, Rettler officials remain cognizant of the potential for improved connectivity between the two parks.

“What we are doing and what we discussed in (earlier) meetings, is to look at all of the uses of City Park,” Kneer explained. “We want to make sure that if there is a connection opportunity to City Park that we don’t miss (it). Because there are many elements (of City Park) that we don’t want to duplicate, but that we want to provide connections to.”

He listed a few examples that included the possibility of various kiosks or signage in Higley Park that notified park users that an additional 40 acres complete with camping, Frisbee Golf, trails and other amenities await exploration and recreation just beyond the tree line at the western edge of Higley. To accommodate the new system of trails and achieve a more centrally open area between both parks, Kneer strongly suggested the removal of much of the fencing at Higley. It would not only provide better access routes within Higley, but also a better connection to City Park.

“Having that fence really provides a barrier, both a physical and visual barrier,” Kneer said. “So removing that and opening those court spaces up would really improve connectivity ... and allow for freeflow through (the) park uses.”

Scray hopes that improvements to that connectivity between the parks would allow park-goers to better utilize the valuable asset that drops more than a 48-acre swathe of land dedicated to fun and the social, mental and physical health of the entire Marinette community.

“With our campground being in City Park, they wanted to create some trails and different ways for people to walk from one park to the other and better utilize all the amenities that we have to offer,” he said. “There is really a lot to offer there, between those two parks.”