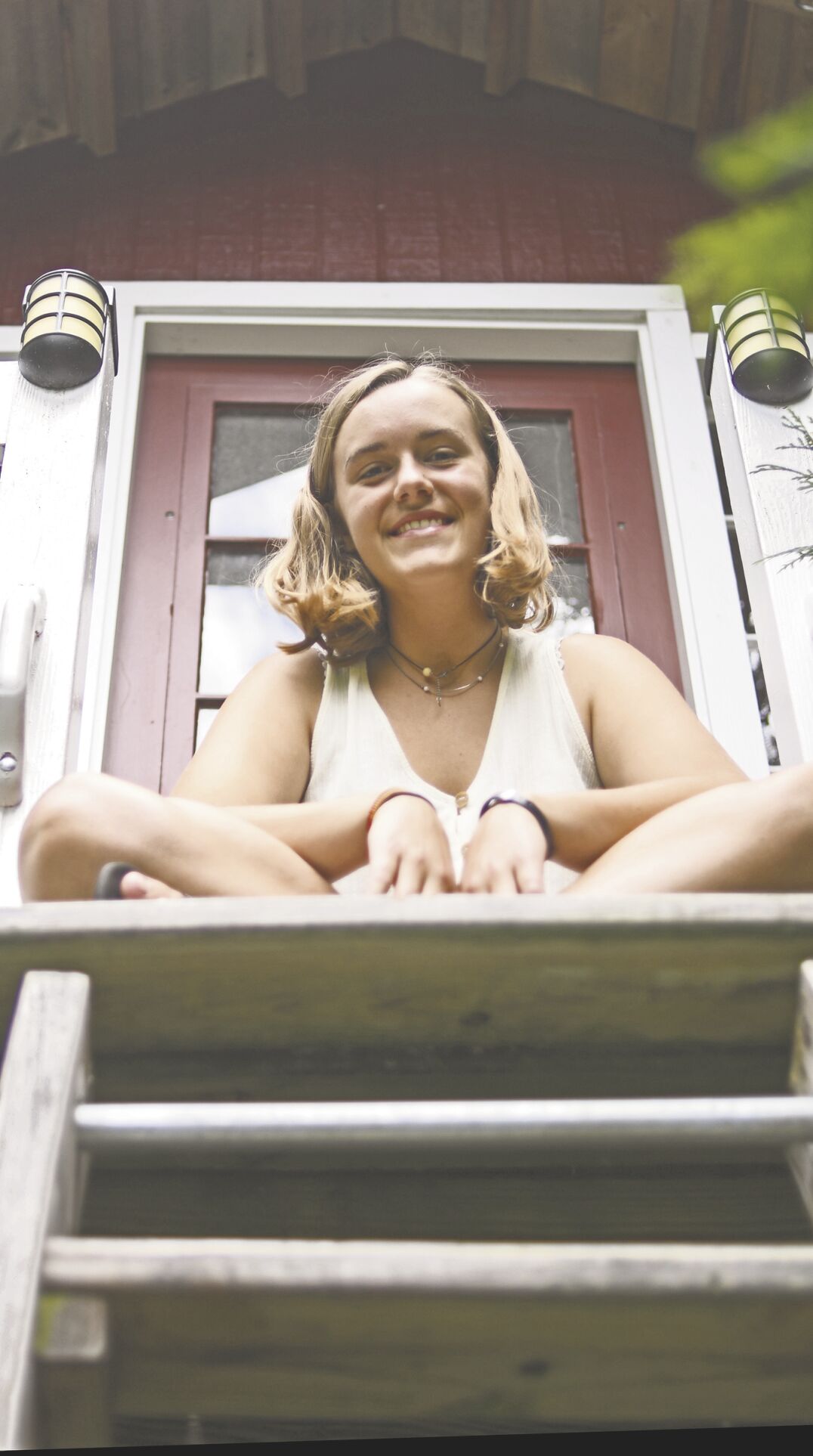 Sarah Kallgren, 21, Marinette, returns home for summer break sitting in her childhood tree house Thursday in Marinette. Kallgren studied abroad in Vietnam and Morocco in a sustainable development program with an emphasis on geography and climate change. 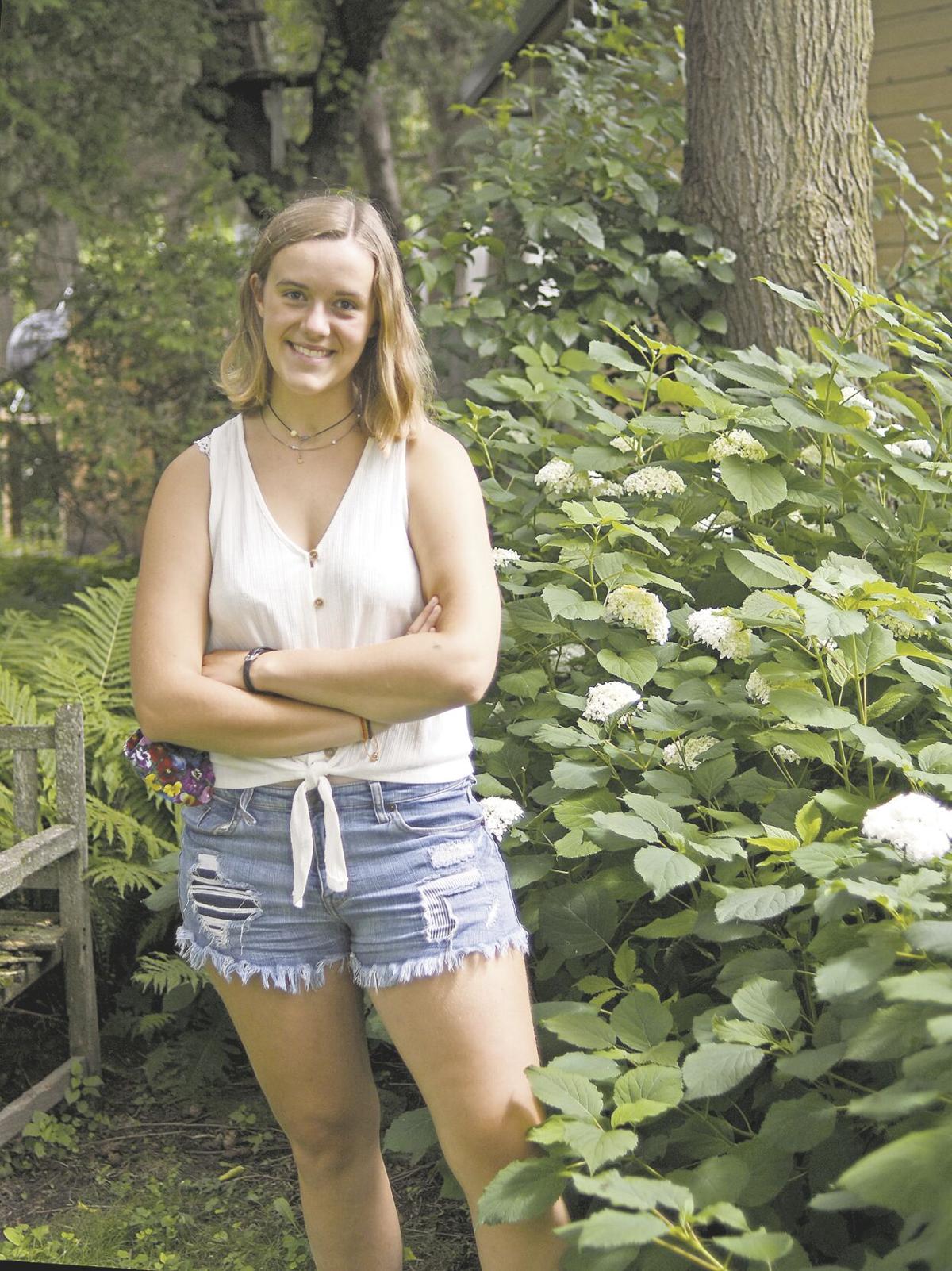 Sarah Kallgren, 21, Marinette, returns home for summer break sitting in her childhood tree house Thursday in Marinette. Kallgren studied abroad in Vietnam and Morocco in a sustainable development program with an emphasis on geography and climate change.

MARINETTE — The world was Sarah Kallgren’s backyard for the first few months of this year before she had to return home as a result of the global spread of COVID-19. The Marinette native and student at George Washington University in Washington, D.C. had traveled to Vietnam and Morocco, studying the effects of climate change on the people of those countries.

“The program was through the School of International Training. You go to three separate countries starting in the U.S. For us, we started in San Francisco, and stayed there for two weeks for orientation, and then we went to Vietnam for five weeks and then Morocco for only about two weeks before we were sent home. We were supposed to go to Peru afterward,” she said.

Kallgren said the program was focused on studying how climate change was affecting different groups of people differently, and looking at the issue from a local level as well as a global one.

While in Vietnam, Kallgren said her group of 30 spent time in the Mekong River Delta region. “A kind of equivalent comparison could be the Mississippi River; it’s a big deal for transport, and there are river beds that are super fertile so you can grow things on it, and it’s a big source of food for fisherpeople,” she said. She said the area is particularly vulnerable to negative effects of a change in climate, such as excess flooding and changes in acidity in the water, which would affect the fish that they rely on for food. They also visited the Cham Islands, which she said rely on fishing and tourism for their livelihoods.

Kallgren said they visited a “floating market,” where anglers would set up shop on their boats, and patrons would ride through on their own boats, hitching up theirs to the vendors they wanted to interact with.

While preparing to leave for Vietnam, COVID-19 was beginning to spread in China but hadn’t yet crossed into other countries. “It sort of followed us. We started in San Francisco, and we were going to Vietnam, which shares a border with China, so initially the program directors in the United States thought we’d at least need to talk about it (with us),” she said.

Kallgren said the directors got their first “COVID briefing” in San Francisco, and they were told that those running the program would be doing everything they could to protect the students involved from the virus, especially since they were going to be in a bordering country. “Because of the nature of the program, that we’d be travelling so much as is, they sort of thought that we’d be able to outrun COVID; if it came to Vietnam, we’d just leave early for Morocco, and same thing for Peru. It was always this cloud over our heads,” she said.

Kallgren said Vietnam shut down for about a week while the group was there, and wouldn’t let anyone go to class. “We were in this beautiful town on the coast, and we were staying with host families that were all within a couple blocks radius. It felt kind of like summertime in elementary school with all your friends living nearby,” she said.

The trip to Morocco was supposed to take them to a solar farm, but by the time they got there, a lot of other study abroad programs were beginning to send students home. Their program continued for a while, keeping an eye on the situation.

“The second week we were there, we had a Skype meeting with our program director who lives in Virginia, and he said’ After Morocco’s finished, we’re not going to go to Peru. We’re going to go home and finish the semester online.’ We thought, ‘Okay, that’s valid,’” she said.

And then Kallgren’s group got another email shortly after saying they weren’t waiting until the scheduled time in Morocco was over, but would leave by the end of the next week. “We were sort of all scattered at that point; we had Friday off of classes and we were going to leave on Sunday to go to the Atlas Mountains. And then Saturday, they emailed us and said we’re leaving Monday, so we needed to get to Casablanca where the airport was,” she said.

She said the flight itinerary they were given had them flying from Morocco to Qatar, and then from Qatar to New York. “I was like, ‘Wait, Morocco is in North Africa and Qatar is in the Middle East. You have to go east to go west?’ It didn’t make any sense, but countries were starting to close, so their options were pretty limited. The next day they suspended all flight travel,” she said.

Kallgren said they were in a hotel in Morocco for about four days trying to figure out how to get back, and the U.S. Embassy in Morocco wasn’t very helpful. Eventually they found out the United Kingdom had a deal with the Moroccan government that would allow them to get people from Marrakech, Morocco, to London. “Marrakech is in the far south of Morocco, and we were in the far north, so we thought ‘That’s perfect, we’ll just get a flight to London and figure it out from there.’ The program didn’t want to do that because we could’ve gotten stuck in London,” she said.

One person in Kallgren’s group was able to contact a travel agent in the U.K. who was able to get the group tickets from Marrakech to London. “This was the last night that we were there and it was at midnight. He told us he found a plane to get us home and we should come to the conference room. And we were just hanging out in our hotel rooms, someone was dying someone’s hair, not thinking very big-picture at all,” she said.

Kallgren said they wandered down to the conference room, and the flight was booked for the next day at noon, and they were four hours away. She said a local faculty member was able to charter a bus to Marrakech in the middle of the night. “Everyone was trying to call their parents, asking if they could get them a flight from London to their final destination; mine was Chicago. My parents were like, ‘Yes, we’ll meet you there,’” she said.

“Like anything, when you sign up for a group traveling experience, it was a group of 30 strangers living in close quarters under emotionally strenuous conditions. Not because of COVID, but because of the things we were talking about. They were emotionally charged, talking a lot about people’s livelihoods. On top of that, we were constantly moving from place to place, so it was very tiring,” she said about the challenges of the experience unrelated to COVID.

But she said she got much more from the experience that was positive. “Being able to chat with people from all different communities and positions was really cool. We talked to members of non-profits and government officials, and we also talked to local activists and heard different perspectives. And being with a host family was great. My family has hosted exchange students before and we always got a kick out of it, so it was really sweet to be on the other end of that,” she said.

Kallgren was able to make it home and finished up the semester remotely. She said the group was still able to meet with some of the people they were supposed to have met in person when they made it to Peru over the internet. In order to graduate next year, Kallgren said she wouldn’t be able to do another study abroad before graduating.

“I’d absolutely love to continue to travel, and this program is great. When you hear about climate change on social media, they really focus it as a polar bear problem; ‘Oh, the ice caps are melting and the polar bears are going to die,’ way more than focusing on it as a people problem. The program made me realize this isn’t just an arctic issue, and I’d love to be able to tackle climate change on a smaller scale, maybe on an international level, but especially getting smaller communities to rally,” she said.