Saint Thomas Aquinas Academy's Addison Pristelski fires off her shot in front of a Niagara defender during the Cavalette's Marinette and Oconto Conference game Thursday in Marinette. 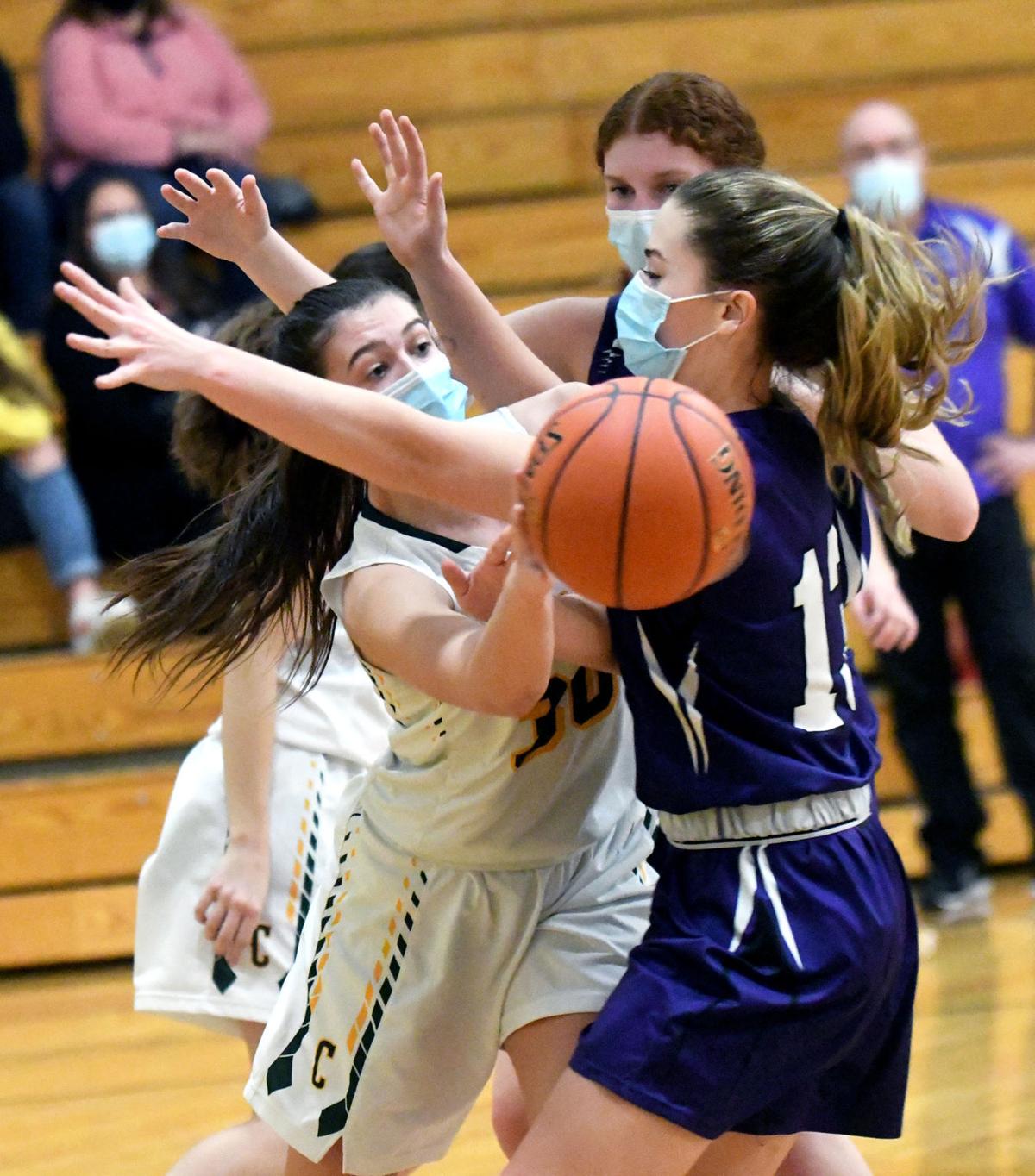 Saint Thomas Aquinas Academy’s Katie Jo Knox passes to an open teammate while being defended by Niagara’s Morgan Borchardt during the Cavalette’s Marinette and Oconto Conference game Thursday in Marinette.

Saint Thomas Aquinas Academy's Addison Pristelski fires off her shot in front of a Niagara defender during the Cavalette's Marinette and Oconto Conference game Thursday in Marinette.

Saint Thomas Aquinas Academy’s Katie Jo Knox passes to an open teammate while being defended by Niagara’s Morgan Borchardt during the Cavalette’s Marinette and Oconto Conference game Thursday in Marinette.

MARINETTE—A big second half fueled the Lady Badgers of Niagara to a 53-31 victory over Saint Thomas Aquinas Academy in Thursday’s Marinette and Oconto Conference clash.

Niagara (6-2 M&O Conference, 6-3 overall) pressed the Cavalettes (0-8 M&O, 0-9 overall) defensively from the opening tip and made it difficult for STAA to even cross midcourt while forcing several turnovers and converting them into easy baskets.

Alyssa Cretton poured in 11 of her game-high 24 points in the first half while Morgan Borchardt added six and Abigail Wells knocked down a 3-pointer as the Lady Badgers built a 24-15 halftime lead and Niagara outscored the Cavalettes by a 29-16 margin in the second half to send STAA to its eight straight loss.

Points proved hard to come by early for STTA, with Livia Benson scoring off a layup and Jenna Maxwell canning a long two-pointer that made it a 9-4 game.

With the score 15-4, Benson hit a free throw to cut Niagara’s lead to 10, but the Lady Badgers tacked on free throws from Noelle Champagne and Borchardt, who also added a bucket of her own while Cretton tacked on a layup and a free throw, to take a 22-5 advantage with 5:08 remaining in the first half.

After putting the Cavalettes into the bonus with 3:00 left until halftime, Addison Pristelski swished a pair of free throws and proceeded to catch fire, scoring 10 points to close out the half, including a pair of corner-treys, while STAA’s defense held Niagara to just two points in the half’s waning minutes to make it a nine-point game at halftime.

STAA’s offense appeared poised to keep cooking as the second half began, with Benson scoring off a layup courtesy of a dish from Bryeli Smith, but Niagara answered back with a 19-0 run that pushed the score to 43-17 with 9:05 still to play.

The Cavalettes used free throws to chip away at the Lady Badgers’ lead, with Benson, Smith and Pristelski going a combined 5-6 from the free throw line while Benson added six more points and Pristelski drilled a triple. However, Niagara closed matters out with a free throw by Cretton with 47 ticks left on clock before Champagne added an insurance basket to preserve the victory.

“My girls don’t quit and they played much better in the second half. We always start out slow and Niagara went on a run in the beginning that caused us problems,” STAA head coach Cindy Powers said. Pristelski was STAA’s top scorer with 15 points while Benson backed her up with 12 while Maxwell and Smith both finished with two. Next up for the Cavalettes is a home game Tuesday against Stockbridge at 7 p.m. while Niagara is back in action tonight with a home game against Suring at 7:15 p.m.