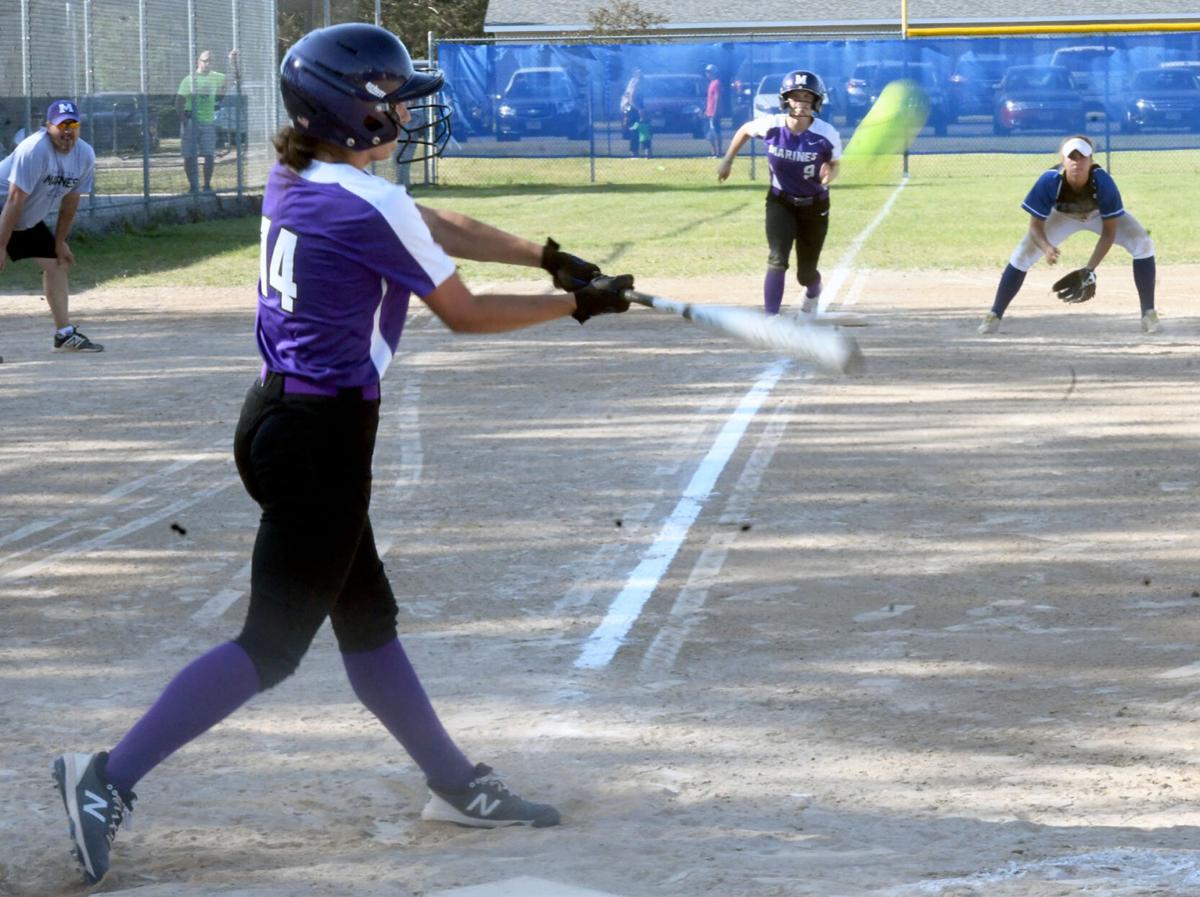 Marinette’s Cienna Grawey smacks a single during the seventh inning against the Peshtigo Bulldogs Wednesday in Peshtigo. 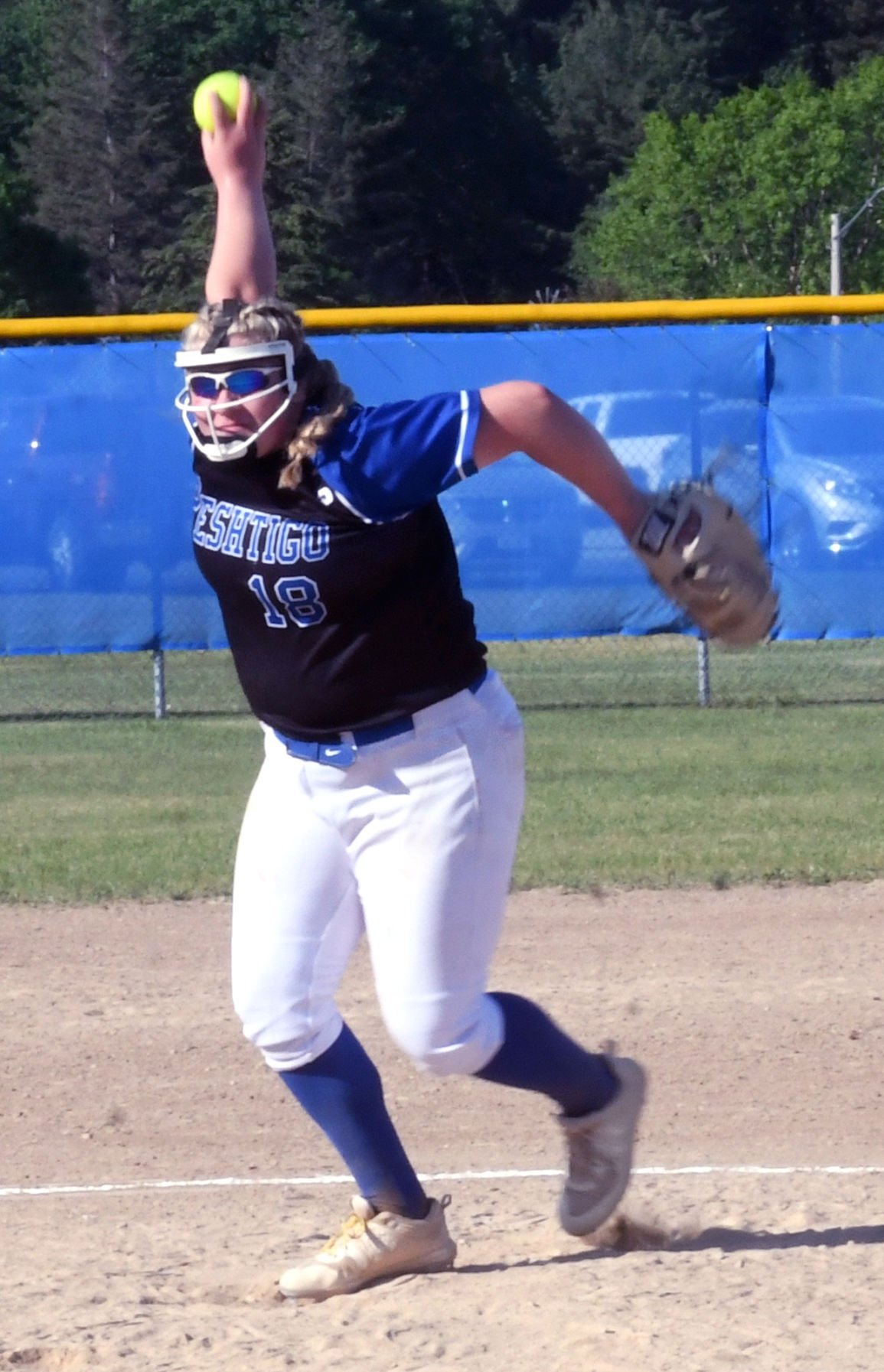 Peshtigo’s Bethany Ahrens uncorks a pitch during the seventh inning against Marinette, Wednesday in Peshtigo.

Marinette’s Cienna Grawey smacks a single during the seventh inning against the Peshtigo Bulldogs Wednesday in Peshtigo.

Peshtigo’s Bethany Ahrens uncorks a pitch during the seventh inning against Marinette, Wednesday in Peshtigo.

PESHTIGO—Marinette’s Sydney Nemetz was so fired up, her eyes were twitching.

Nemetz, a senior, had been playing softball with and against Peshtigo’s Dreya Detry, Sam Kodric, Allison Dudka, Sydney Lund and Lexi Kehoe since their days as kids in summer leagues, so motivation was never going to be an issue.

“We’ve been playing each other for a really long time and we’ve always been rivals, so I think all of us came into this game wanting to win no matter how much we love each other,” she said.

Nemetz showed no love for the Bulldogs Wednesday, holding Peshtigo’s high-scoring offense to just one run and seven hits while striking out 12 batters, as Marinette downed the Bulldogs 8-1 in non-conference action.

“Syd was amped to begin the game and she was just as amped in the seventh inning,” Marinette coach Scott Macintyre said. “We’ve played in some really big games this year, but this one meant a lot. Some of our girls played with their girls in summer leagues, so this was a great experience. From 8U on, it was always Marinette and Peshtigo playing for the championship in every tournament so it was neat for our seniors to have this.”

Peshtigo (7-1 Packerland Conference, 22-2 overall) entered Wednesday’s game outscoring its opposition 292-38, but the Bulldogs found themselves in the unfamiliar position of playing catch-up after a big first inning by Marinette.

The Marines (14-4 North Eastern Conference, 15-5 overall) got to Bulldogs’ pitcher Bethany Ahrens early, tallying six of their 12 hits in the top of the first inning. Ahrens struck out four and issued two walks while allowing five earned runs across seven innings in the loss.

Matti Renikow put Marinette on top with a two-RBI double to center field before coming around to score thanks to a wild pitch. Wynn Erdman cracked a two-RBI double of her own to score Nemetz and Bailie Thielen and make it a 5-0 game.

“That first inning was huge. We put a lot of pressure on Peshtigo and it was good for us to get a win against a team like them,” Macintyre said. “It’s good for both of us. The competition is good and what it’s all about.”

Pitching and defense dominating the middle innings for both teams, with the Bulldogs going 0-12 with runners in scoring position. Ahrens regrouped after the first inning and retired 15 of the next 17 batters she faced, with the only blemishes being a walk issued to Renikow in the second inning and single by Nemetz in the fifth.

“I didn’t think we were ready to go in the first inning. I don’t think Bethany was ready and it looked like for the first six or seven batters, she wasn’t throwing as hard as she usually does,” Peshtigo coach Bill Wickman said. “By the seventh or eighth batter, she got into her zone and we played them even from the second to the sixth inning.”

Both pitchers mowed through the opposing lineups until the seventh inning, when Marinette added a run thanks to an RBI single from Thielen, who then scored on an RBI single by Cienna Grawey. A third RBI single, this time from Lexi Kacalo, gave the Marines an 8-0 advantage.

Peshtigo appeared poised to start a rally in the bottom of the seventh, with Kehoe drilling a single up the middle and Grace Wickman singling into left field.

Karli Cahill flied out for the first out while Allison Peters grounded out for the second, but Kehoe was able to score thanks to an errant throw to third base to make it a 7-1 contest. With Peshtigo down to its final strike, Nemetz managed to strike out Ahrens to seal the victory.

Coach Wickman hoped Wednesday’s game would serve as tune-up for the Bulldogs before the postseason begins with the WIAA Regionals Monday.

“We had some mistakes defensively in the first and seventh innings and I told the girls that the team that made the few mistakes would win the ballgame, and we made more mistakes than they did,” he said. “I wanted to play some good competition and now, this is a reality check for our girls. Marinette is a good team and you can’t take anything away from them. From here on out, it’s one-and-done and your season is over, so our girls know that they have to work hard.”

Grace Wickman led Peshtigo’s offense, going three-for-three with a double, while Kehoe, Cahill, Dudka and Lund all collected one base knock.

Renikow was the Marines’ top performer with the bat, picking up two triples in three at-bats while driving in two runs and scoring two of her own. Erdman was two-for-four with three RBIs while Nemetz, Thielen and Grawey each tallied two hits.

“This was kind of like the M&M game,” Macintyre said. “You could come here and lay an egg because you’re so amped up. This game is one that the girls will remember for the rest of their lives. They’re never going to run into a (NEC rival) Denmark girl, but they’ll run into girls from Peshtigo and talk about this game 20 years from now.”

The Marines had one final tune-up game before sectionals, traveling to West De Pere Thursday with results unavailable at press time.

Both teams are back on the field Monday hosting playoff games, with the Marines welcoming Seymour to town while Peshtigo matches up with Bonduel. First-pitch for both games is 4:30 p.m.